Operational information from the regions of the Active Community Network (April 8, 2022)

44th day of the heroic opposition of the Ukrainian people to the russian military invasion. 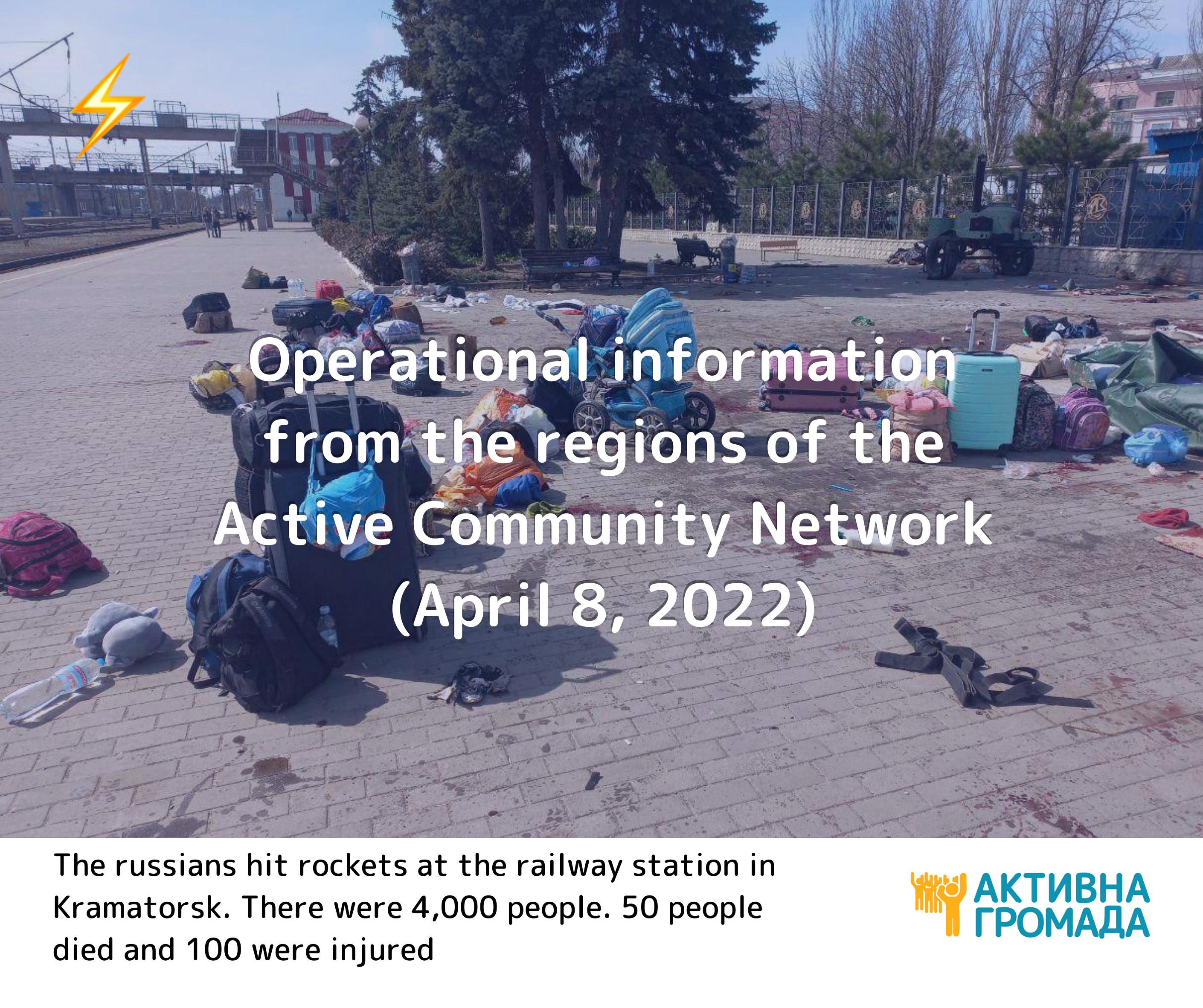 Ukraine in brief:
44th day of the heroic opposition of the Ukrainian people to the russian military invasion.
The armed forces of the russian federation continue to conduct full-scale armed aggression against Ukraine. The enemy is preparing for an offensive in the east of Ukraine.
Russian invaders continue to destroy civilian infrastructure by inflicting rocket and artillery strikes on railway junctions and communication lines, stations, residential areas, and places of the evacuation of the civilian population from the areas of combat operations.
In the east and south of Ukraine, the enemy builds up the number of troops. The invaders did not give up their attempts of offensive operations in the direction of the settlements of Popasna and Severodonetsk. They are not successful with their plans.
In Mykolaiv Oblast, the enemy forces conducted military operations in the area of the settlement of Oleksandrivka. They tried to carry out heavy shelling to defeat the Armed Forces of Ukraine units in the above location. They failed to reach their goal.
The enemy continued to blockade Kharkiv, shelling residential areas using artillery, including multiple launch rocket systems and large-caliber mortars. The invaders completely withdrew their troops from the Sumy Oblast to russia. Russian occupation troops have significant problems with the manning of the military units that suffered substantial losses during hostilities in Ukraine.
In the temporarily occupied territories, the enemy violates International Humanitarian Law by committing unlawful acts against the civilian population, including looting, theft of vehicles, and detention of Ukrainian citizens.
Northern oblasts
Kyiv
The Kyiv Military Administration urges not to return to the capital city yet, as the actions of the invaders are unpredictable.
Emergency and recovery activities, demining of the area, and explosive ordnance disposal are being carried out in the suburbs and on the capital’s outskirts.
The Pushcha-Vodytsia area, which was badly damaged during the russian attacks, was closed to entry. Now deminers work there. Meanwhile, Kyiv is returning to a peaceful life. Over the past 10 days, more than 900 entrepreneurs have resumed their work in the city.
Kyiv Oblast
In Bucha, they began to exhume the bodies from a mass grave near the Church of St. Andrew the First-Called and All Saints to identify people and establish the circumstances of their deaths. They managed to identify 163 of the 320 killed civilians, said Mayor Fedoruk. 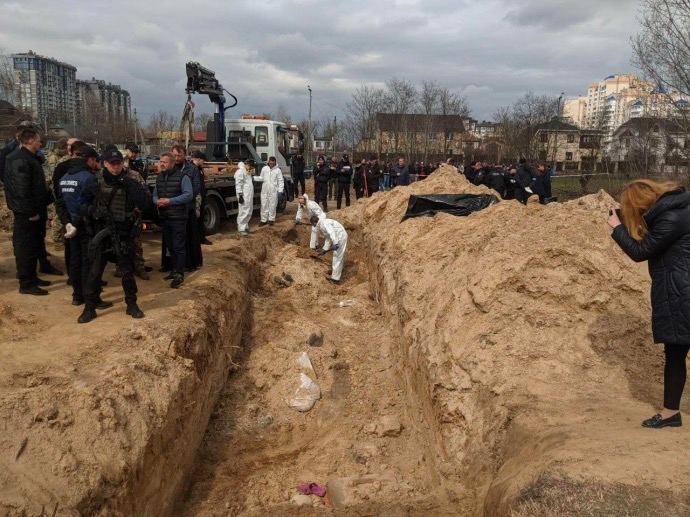 Restoration work continues for the third day in Borodianka. Together with the State Emergency Service fighters, 60 volunteers remove the rubble, clear the area of construction debris, and look for the bodies of the dead. Sex crimes against older woman and children were also recorded in the city. 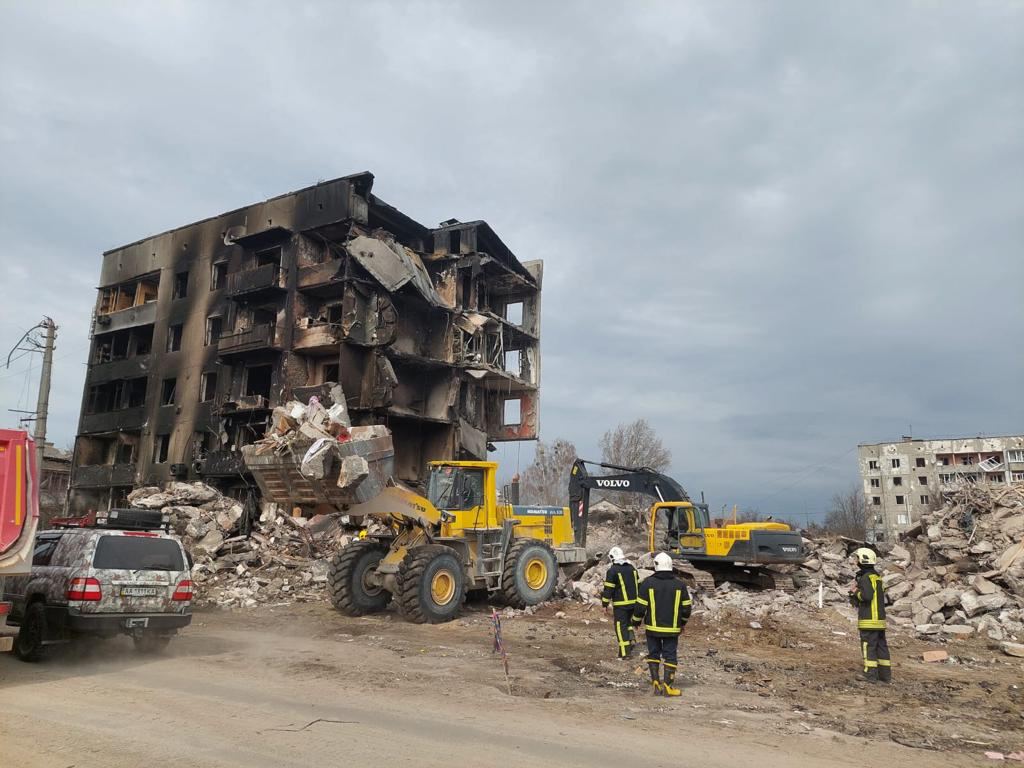 143 people were found shot dead in the village of Makariv. Leaving Chornobyl, the invaders looted and damaged buildings and structures in the Chornobyl zone. A modern analytical laboratory worth 6 million euros was looted and destroyed in Chornobyl. In addition, russians destroyed the archive of the Chornobyl Nuclear Power Plant (NPP), which Ukrainians had been collecting for decades. 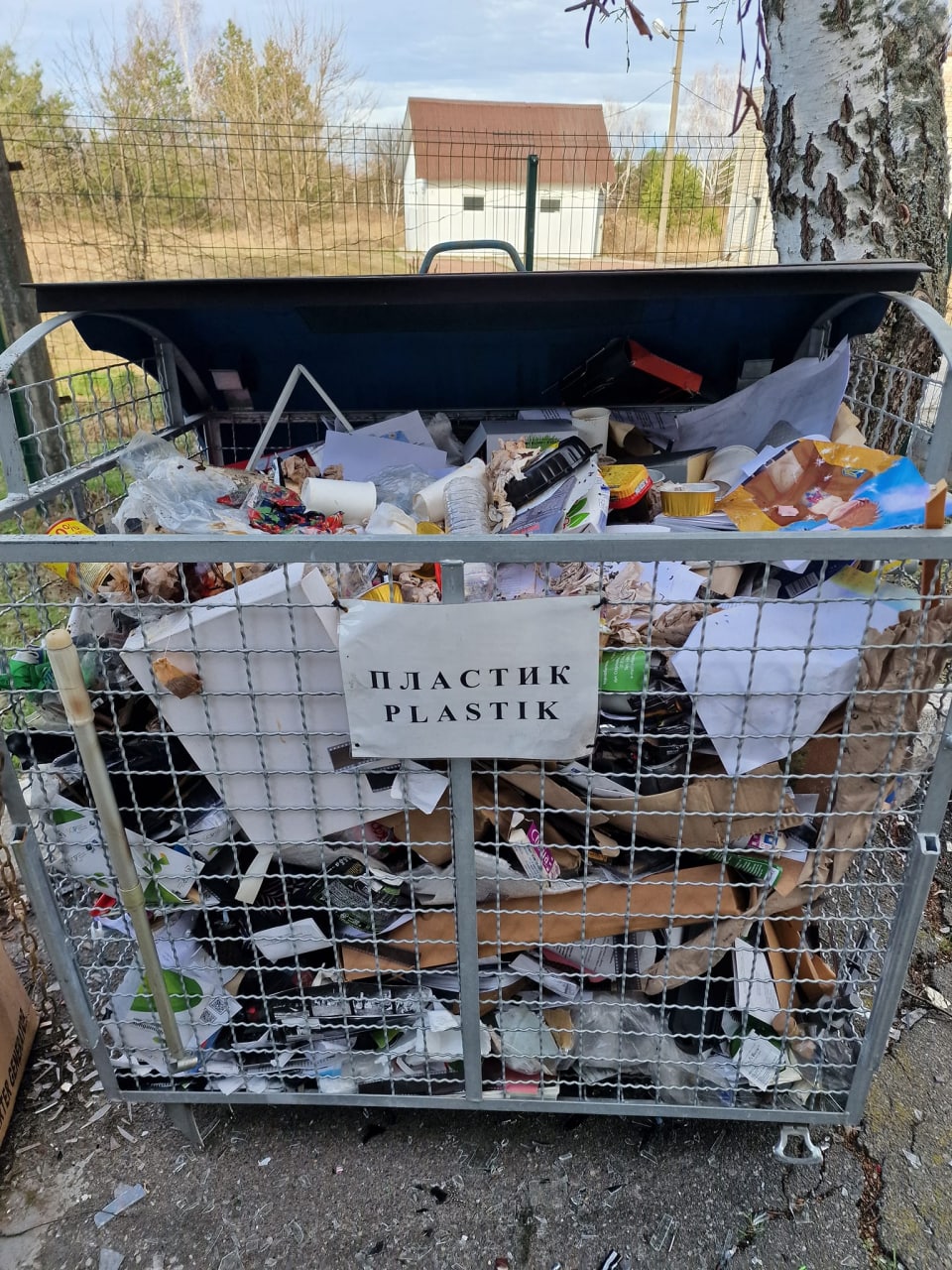 Zhytomyr Oblast
The situation is calm and controlled. The Security Service of Ukraine in Zhytomyr Oblast has created a chatbot (http://t.me/SBU_Zhytomyr_bot) that allows residents of the Oblast and neighboring regions to report separatism and terrorism, sabotage groups, assisting russian occupation troops and moving their equipment and troops.
Novohrad-Volynskyi City Council has allocated almost 6 million hryvnias for military units stationed in the community. On April 11th, the Center for Comprehensive Rehabilitation for Children with Disabilities will resume its work in the community. Services of social, pedagogical, and physical rehabilitation, speech therapy correction, and therapeutic massage will be provided. From April 9th, public transport in Zhytomyr will be tolled again. At the same time, travel for free categories remains free.
Chernihiv Oblast
Chernihiv Mayor Vladislav Atroshenko said about 700 people had died in the city since the start of a full-scale russian invasion. It’s both military and civilian. 70 people could not be identified.
As a result of hostilities, 626 kilometers of state roads were damaged, 21 percent of state routes. 16 bridges and overpasses were also destroyed. More than 20 crimes against cultural heritage by the russian occupiers were also recorded in Chernihiv.
Yesterday, in one day of pyrotechnics work in the Oblast, 3213 units of ammunition were seized. Almost 70 percent of Chernihiv residents now have electricity.
Sumy Oblast
There is an air alarm in the Oblast. There was a rocket attack by russian troops in the Shostka Raion in the morning. A house was damaged in the village of Sobycheve. One person received a shrapnel wound.
There are currently no russian troops in the Oblast. Relevant services are demining and disposing of ammunition left behind by the russian military. Single explosions are associated with this. During the past 24hrs, rescuers found 115 explosive devices during demining in Sumy Oblast. Some of them were neutralized, and some were sent to the sorting site.
Yesterday, electricians of the Trostyanets operational brigade “Sumyoblenergo” exploded on an anti-tank mine. One was killed, and two were seriously injured.
Eastern oblasts
Kharkiv Oblast
Over the past 24 hours, the russian occupation forces have struck about 48 artillery, mortar, tank, and MLRS strikes in the Saltivka, Pyatihatki, Oleksiyivka, downtown, and Dergachi districts. 15 people were injured. Active battles continue in the Izium direction. Russian atrocities against civilians in Ukraine are recorded daily. During the temporary occupation of the village of Husarivka in the Izium district, the russian military tortured and then set fire to three residents. The burned body parts were found in the basement of one of the houses on April 7th, after the liberation of the village. 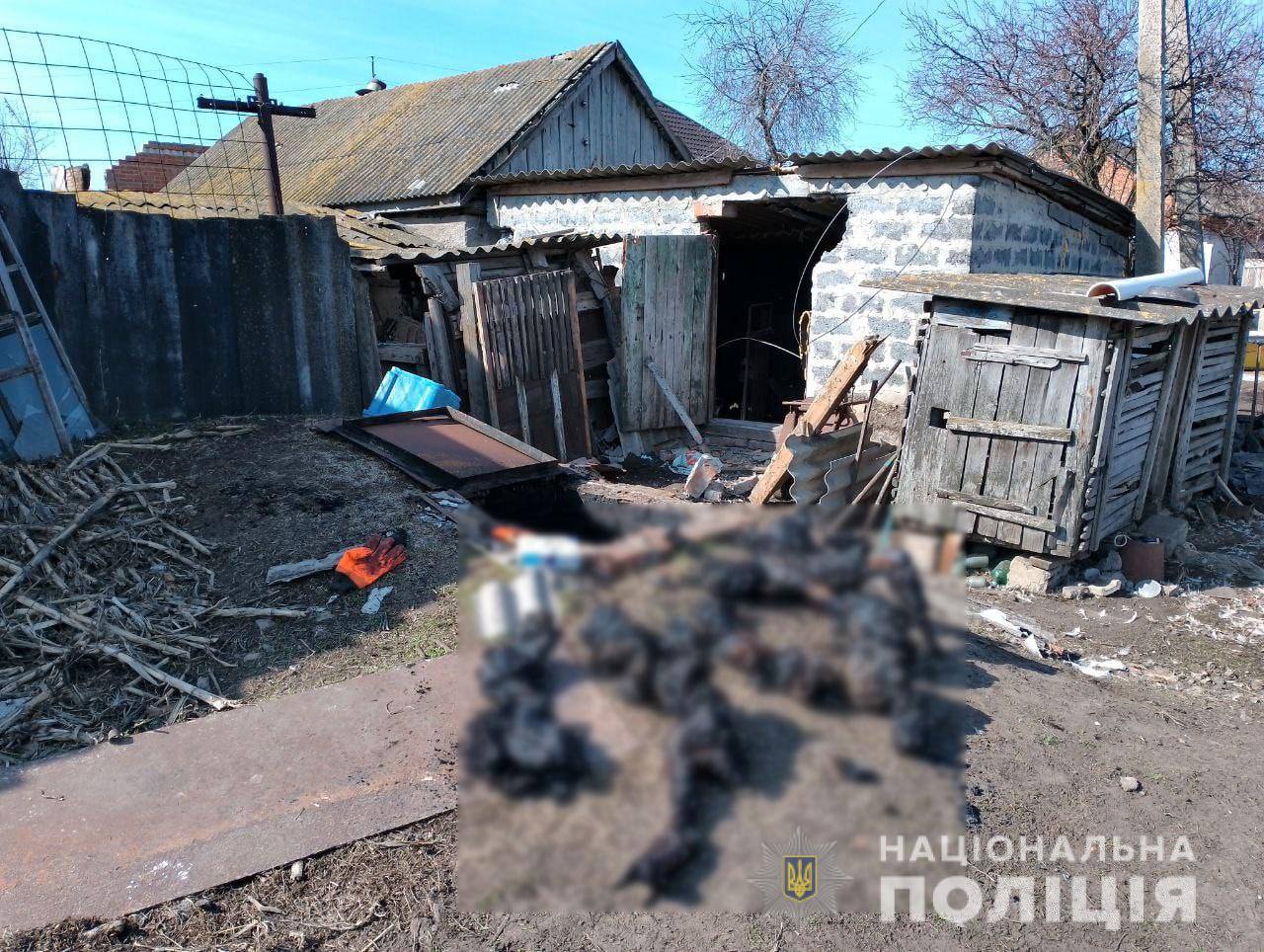 Donetsk Oblast
In the Donetsk Oblast, the Nova Poshta branch will suspend work from April 9th.
Kramatorsk
Today, the russians aimed two missiles at the railway station in Kramatorsk, where about four thousand people were. Last week, Kramatorsk was the largest hub for evacuating Donetsk and Luhansk Oblasts. The wounded were hospitalized and operated on; many people lost limbs – arms and legs. Fifty people died, five of them children. 38 people were killed on the spot. 98 wounded were hospitalized: 16 children, 46 women, and 36 men. 12 of them later died. 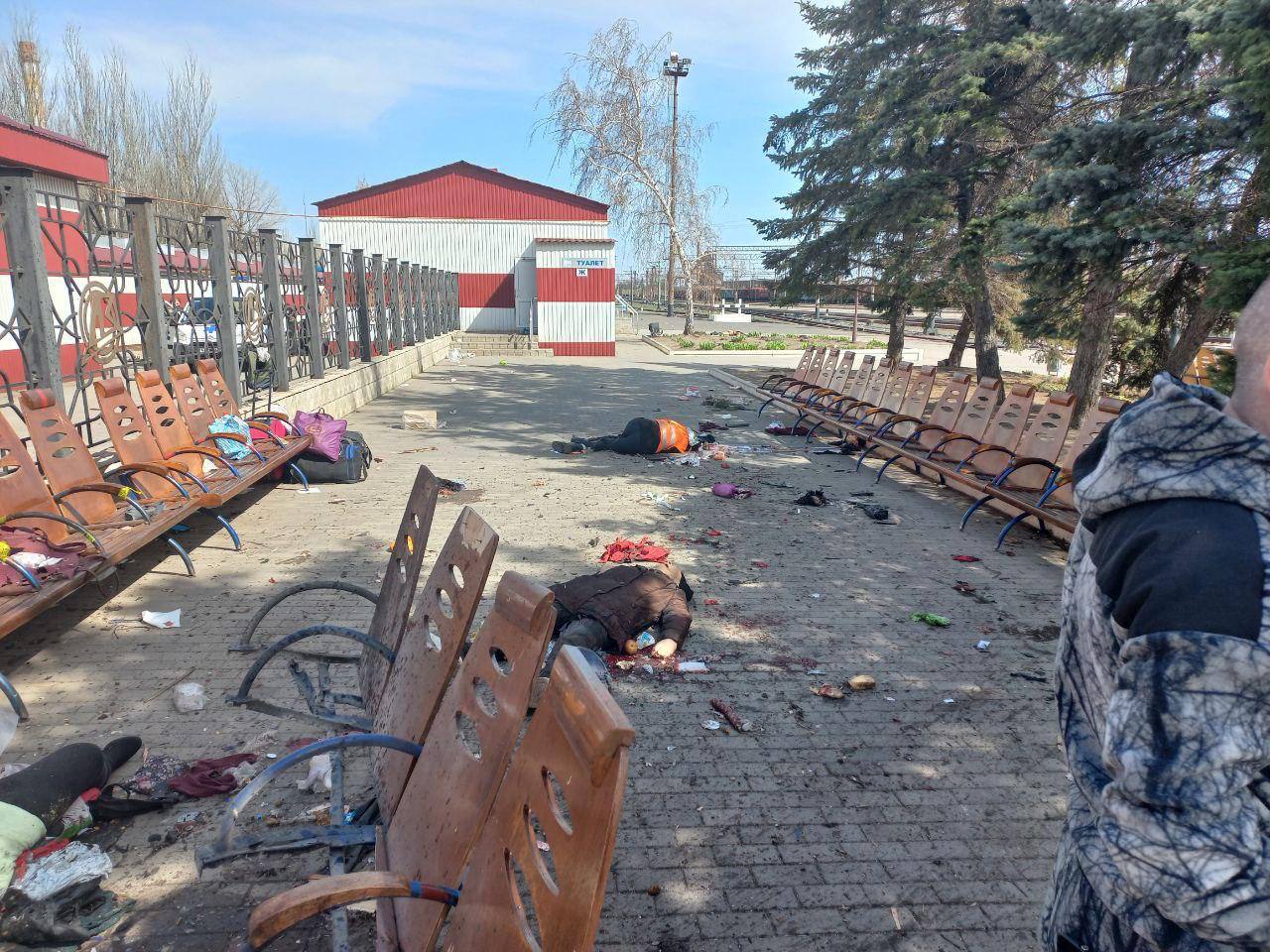 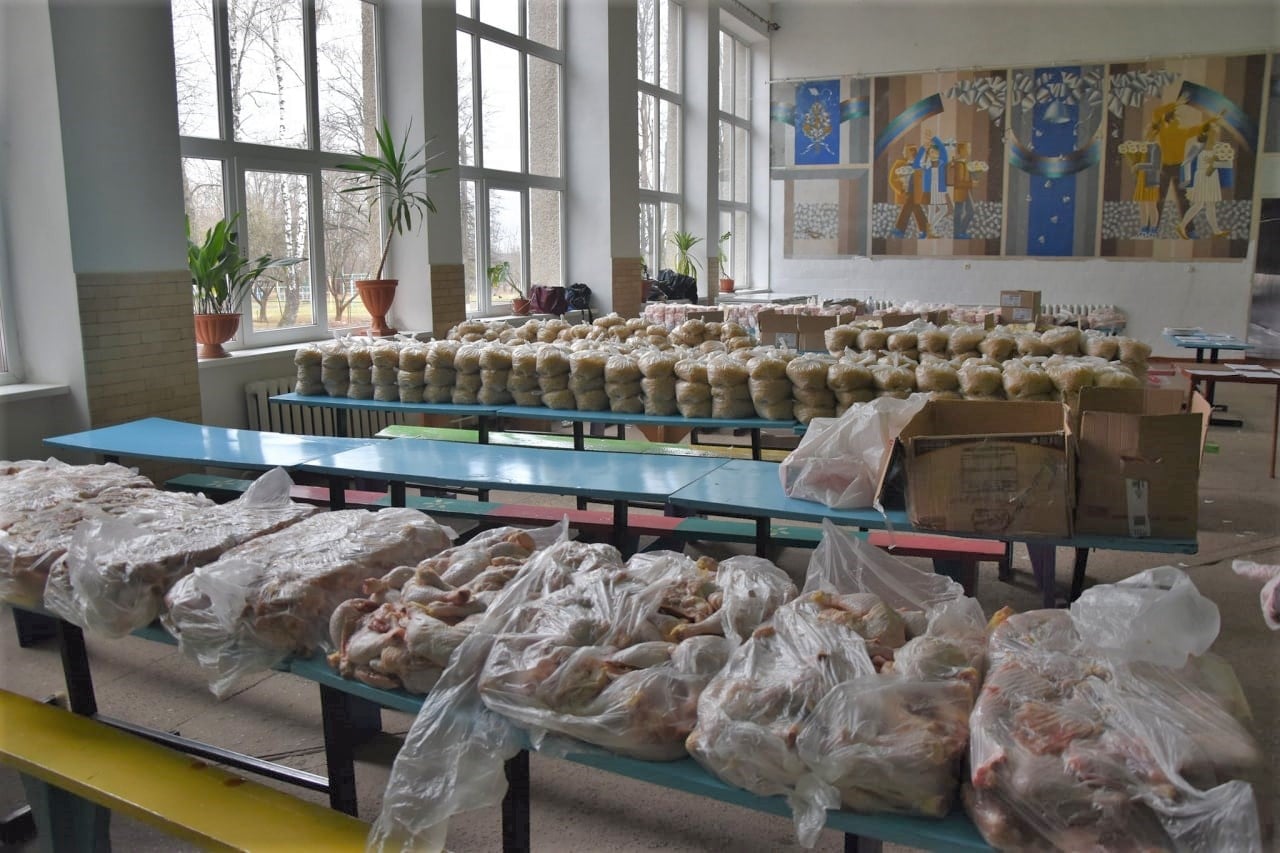 The Oblast is currently the home for 40660 registered IDPs.
14 health care institutions in the Oblast received StarLink equipment from the U.S.-based SpaceX company.
The residents are united and actively assist volunteer centers in cash and kind. A Telegram bot for job seekers has been launched in the Rivne Oblast. The openings are advertised as soon as posted by employers.
Stand-up comedians perform in the city, donating their earnings to Ukrainian servicemen.

Khmelnytskyi Oblast
Kamyanetsk-Podilskyi
Some 114 IDPs have registered with the local community in 24 hours. The municipal Social Protection Department has issued more than 4.3 thousand IDP certificates. Today, humanitarian cargo has been sent from the central municipal humanitarian hub to Okhtyrka.
Residents continue making camo nets and meals for the AFU, collecting humanitarian aid and distributing it to intended destinations, and assisting IDPs and, in particular, children. To help kids get rid of stress and tension, local librarians arrange recreational activities: interactive games, master classes, competitions, and other entertainment events. The librarians are assisted in that by animators and artists.
The sowing campaign is in full steam. The plans in the local community involve the sowing of almost 3500 ha with spring cultures. At the moment, 10 ha of wheat and 80 ha of barley have been sowed.
The community enjoys cultural life: the Song That Unites Us arts project continues at places of temporary stay for IDPs. A StrunaBand duo will perform at the stage of the local house of culture in support of the AFU. The city will see the screening of Unnecessary Things animated movie by Dmytro Lisenbart. A stage performance, What the Men Are Silent About, featuring Popular Artist of Ukraine Dmytro Surzhykov, will take place in the scope of the 5th International Cinema Festival Brukivka (17.00, Sat., LHC).
Chernivtsi Oblast (Bukovyna)
There have been no active military actions on the territory of Bukovyna at this time. The Oblast received 12 tons of humanitarian aid from the Lodz voyevodship. A six-year-old Chernivtsi resident who collected money to support the AFU has been awarded a volunteer certificate.
As of today, Chernivtsi and the Oblast have played host to 73000 IDPs, of them 23000 children.
Zakarpattia Oblast
It is calm in the Oblast. The situation is under control. The AFU and the Territorial Defense Forces prepare to meet the enemy. Local MPs of the Uzhhorod City Council have voted to amend the agenda of today’s session with the following motions:
– on renaming city streets, squares, pocket parks, and lanes named after russian political, cultural, and art figures,
– on dismantling the monument to Pushkin,
– on addressing the Verkhovna Rada of Ukraine to ban orthodox churches of the moscow patriarchy,
– on addressing the Cabinet of Ministers to reinstate its Resolution No. 105, of 4 March 2015, to Compensate Average Salaries Guaranteed to Mobilised Employees of Enterprises and Entrepreneurs From the National Budget