Operational information from the regions of the Active Community network August 3, 2022 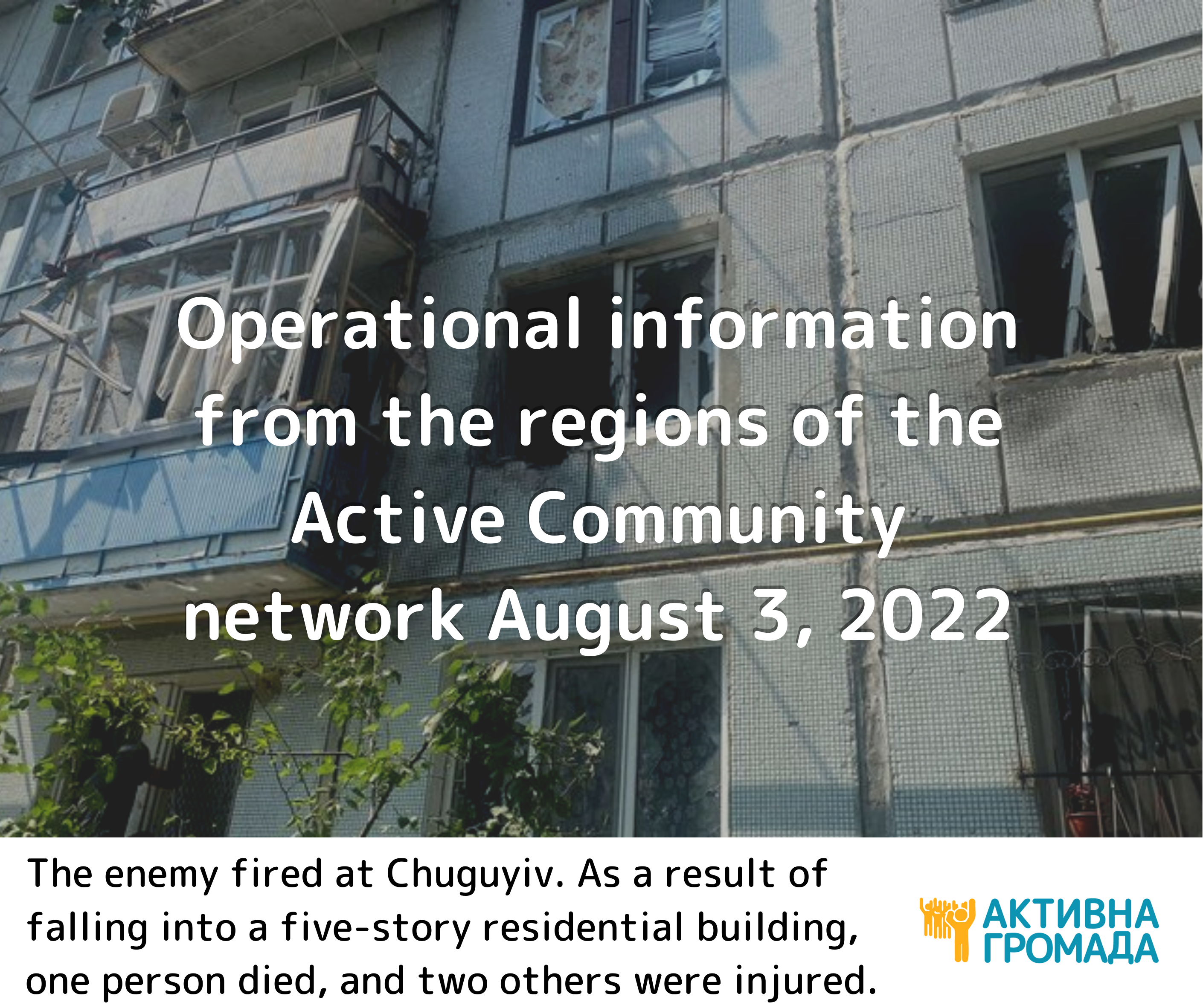 Until the end of August, Natalka Park will host a thematic exhibition called “Valiant. Stories of Heroes”. The exhibition tells the stories of today’s heroes – medics, soldiers, volunteers, rescuers, police officers, who are writing modern history, resisting war, doing what they can, each on their own front.

For Zhytomyr citizens, who lost non-privatized housing as a result of shelling, they want to build apartments at the expense of the EU. This was reported by the Mayor of Zhytomyr, Serhiy Sukhomlyn.

On the border with belarus, the construction of long-term defense structures in areas of probable tank approach of the north of the oblast continues in accordance with the recommendations of the military and taking into account the experience of hostilities in Kyiv Oblast and within Zhytomyr Oblast.

665 displaced Ukrainians are looking for work in Zhytomyr Oblast. Most of them are from Donetsk Oblast, Kyiv city and Kyiv Oblast, as well as Luhansk, Kherson and Kharkiv Oblasts.

277 IDPs have already been employed in Zhytomyr Oblast with the help of the employment service.

The coordinator of the All-Ukrainian Initiative “Active Community” provided information to citizens on receiving humanitarian and psychological assistance.

The trial in the case of Andriy Chudin and Ruslan Kuliyev has begun in Chernihiv. Russian servicemen are suspected of abusing a family in Chernihiv Oblast and attempted rape.

A major overhaul of several residential buildings, the most damaged during the shelling of Chernihiv, begins. Preparatory work is currently underway: the sites are fenced off, shoring is installed to release the load-bearing structures, the remains of construction debris are cleaned up and removed.

Around 7:30 a.m., the russians began shelling the Krasnopillia hromada in Sumy Oblast. 10 hits from self-propelled artillery were counted.

Around 10:25 a.m., the russian military opened artillery fire on the Krasnopillia hromada. The Russians shelled the vicinity of the railway station, the elevator and the center of Krasnopillia. Four hits were counted.

At 11:25, artillery shelling of the northern outskirts of Krasnopillia began again from russian territory. There were 5 hits that damaged residential buildings, destroyed the roof and broke windows.

Around 4 a.m., russian soldiers made 2 strikes on Kharkiv. The rockets were launched from Belgorod. One of them hit the ground in Kholodnohirsky District. The second one hit the territory of a civilian industrial facility in the Novobavar district.

During the past day, the enemy shelled the Bogodukhiv, Chuguyiv, Kharkiv, and Izyum districts of the region. Residential buildings and commercial buildings were damaged. As a result of another shelling of Chuguyev, the warehouses of the educational institution were damaged and a fire broke out. One person died, and 2 more were injured.

During the day, the enemy attacked a number of settlements in the Donetsk region, 16 civilian objects were destroyed and damaged – 11 residential buildings, a summer cooperative, a service station, a warehouse, etc. The occupiers set fire to Krasnohorivka, Maryinka, the village of New York, the villages of Karlivka, Maksimilianivka, and Pisky. The civilian population was shelled from aircraft, rocket launchers, artillery, rocket salvo systems “Grad” and “Uragan”, tanks. There are victims and wounded.

With the forces of the reconnaissance group, the enemy tried to conduct reconnaissance south of Mazanivka, the occupiers were detected and neutralized.

In the Donetsk region, the enemy is concentrating its main efforts on the Bakhmut direction.

In the Siversk direction, the enemy fired from barrel and rocket artillery, as well as tanks near Siversk, Serebryanka, and Hryhorivka and conducted UAV reconnaissance near Nikiforivka and Tetyanivka.

The enemy launched an offensive in the area of ​​the western outskirts of Berestovo that was unsuccessful and retreated. The situation is the same in the directions Volodymyrivka – Yakovlivka and Semihirya – Kodema.

Fighting continues in the Volodymyrivka – Soledar and Pokrovske – Bakhmut directions.

Ukrainian soldiers inflicted powerful fire damage on the directions of Vidrodzhennya – Kodem and Dolomytne – Semihyrya and forced the occupiers to withdraw.

In the Avdiivka direction, the enemy shelled the Avdiivka district. 11 arrivals were recorded in Avdiivka. The enemy tried to improve the tactical position without success and retreated with losses.

On August 2, the russians killed 4 civilians in the Donetsk oblast — in Krasnohorivka. 7 more people were injured.

Since February 24, the russians have killed 675 civilians in the Donetsk region and injured another 1,745.

Enemy action in Kramatorsk was not recorded.

On August 2, at 3:30 p.m., as a result of enemy shelling, the premises of the ambulance substation of the city of Mykolaivka were damaged. As a result of the projectile hitting the boarding school building nearby, the windows were broken, and there was a large amount of broken glass in the middle of the room. No one was hurt.

A meeting was held in Kramatorsk regarding the state of affairs in the field of housing and communal services. For 160 days, Kramatorsk utility workers have been working under martial law: they quickly eliminate the consequences of enemy attacks on the city’s civilian infrastructure, respond to emergency calls, and maintain networks and communications. Kramatorsk still remains without a gas supply. The situation with the water supply is also quite shaky – due to the constant enemy shelling of the pumping stations of the regional enterprise “Water of Donbas” the supply of technical water to the Kramatorsk filter station is disrupted. The Kramatorsk Waterworks delivers water to residents upon request, and also fills stationary water containers located in various locations.

Residents are beginning to sign up for evacuation more actively.

People who do not want to leave the region under any conditions are preparing for the heating season – they are buying firewood and coal.

The situation in the city remains alarming.

The coordinator of the Ukrainian Initiative “Active Community” coordinates the work of the humanitarian center, and helps to coordinate the evacuation process.

The last day in the Pokrovsk community was restless. Around 04:35 a.m., one of the villages of the community was shelled. Currently, the facts regarding the victims and destruction are being established. The Contact Center receives complaints from residents about damage to private housing.

Shifting, closing windows and round-the-clock patrols: who and how will guard the housing of evacuated Pokrov residents in the winter period can be viewed at the link:

In the Bakhmut direction, the enemy, with the aim of dislodging Ukrainian units from the occupied lines, conducted artillery fire in the areas of the settlements of Kodem, Semihirya, Travneve, Vyimka, Berestov, Bakhmutske, and Opytne. Carried out airstrikes near Semihirya and Bilogorivka.

The coordinator of the Ukrainian Initiative “Active Community” was preparing for a meeting on the topic “Burnout”.

In Mariupol, the occupiers are dismantling a memorial to Mariupol soldiers who died defending Ukraine. This memorial was made of granite in the shape of the Ukrainian coat of arms, on which water flows as a symbol of shed tears. The water washes the bronze oak leaves, each of which bears the name of the fallen hero.

In the occupied Severodonetsk, Luhansk oblast, emergency high-rise buildings are falling. It is extremely dangerous to be in damaged buildings, but people still live there.

During 8 years of Russian aggression, the Luhansk oblast lost 700 billion hryvnias of gross product. Before the occupation of part of the region by the Russians in 2014, Luhansk Oblast was in the top five strongest industrial and economic regions of Ukraine.

On the evening of August 2, around 9:00 p.m., the enemy shelled Mykolaiv, as a result of which a fire broke out in one of the districts of the city. In addition, the wharf was damaged, an industrial enterprise and residential buildings were damaged. It is also known that the auto garage cooperative was fired upon by “Smerch” rocket salvo fire systems.

This morning at around 05:00 a.m., Mykolaiv came under fire again. As a result, a fire broke out in one of the districts of the city, and in another, a supermarket was destroyed, high-rise buildings, a pharmacy, shops, and the road surface were damaged. 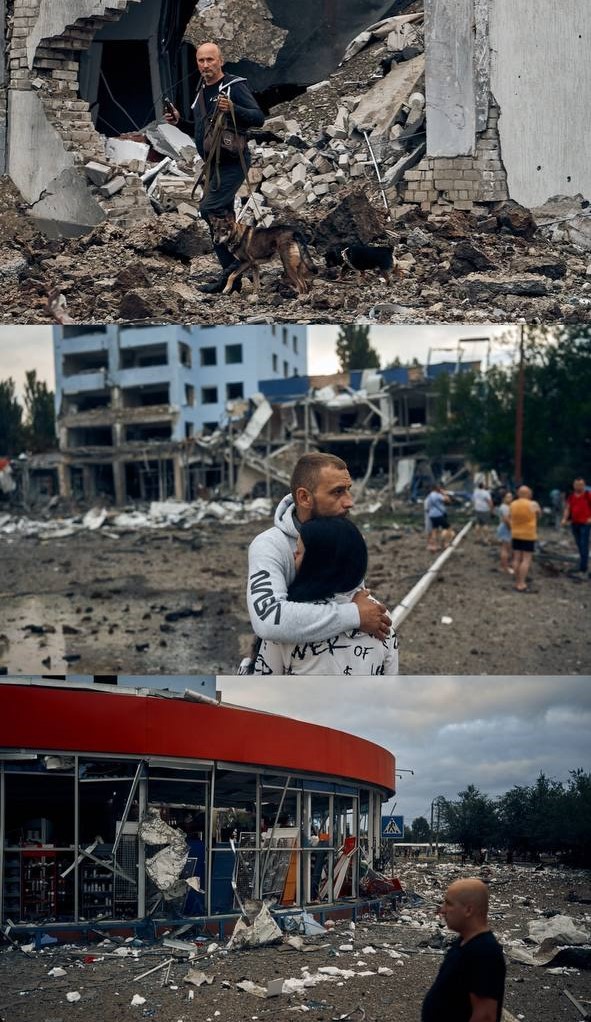 On the evening of August 2, at 9:20 p.m., the invaders shelled the village of Radisny Sad of the Radsadivska hromada, mainly the river aqua zone.

Today at 7 a.m. as a result of shelling by the russians, one person was injured in the village of Halytsynove of the Halytsynov community.