Operational information from the regions of the Active Community network August 30, 2022

The one hundred eighty-eighth (188) day of the heroic resistance of the Ukrainian people to a russian military invasion continues.

The one hundred eighty-eighth (188) day of the heroic resistance of the Ukrainian people to a russian military invasion continues. 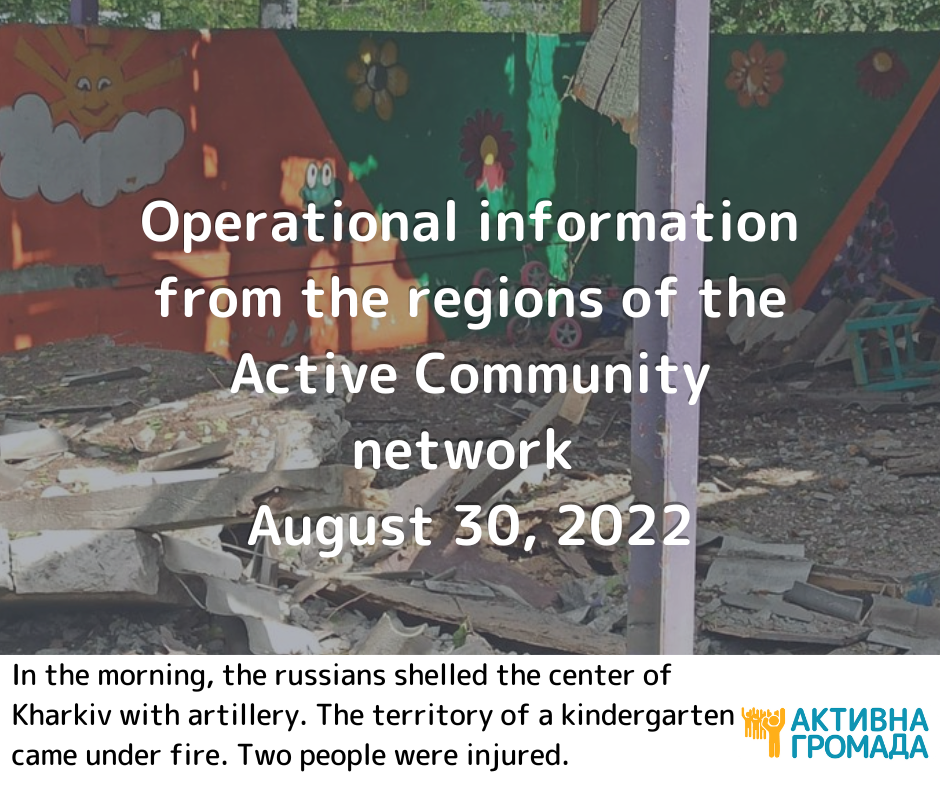 Today, a mission of the International Atomic Energy Agency (IAEA) arrived in Kyiv on the eve of a planned visit to the russian-occupied Zaporizhzhya NPP.

In the Obolon district, a house that was shelled by the russian military in the spring is being restored. 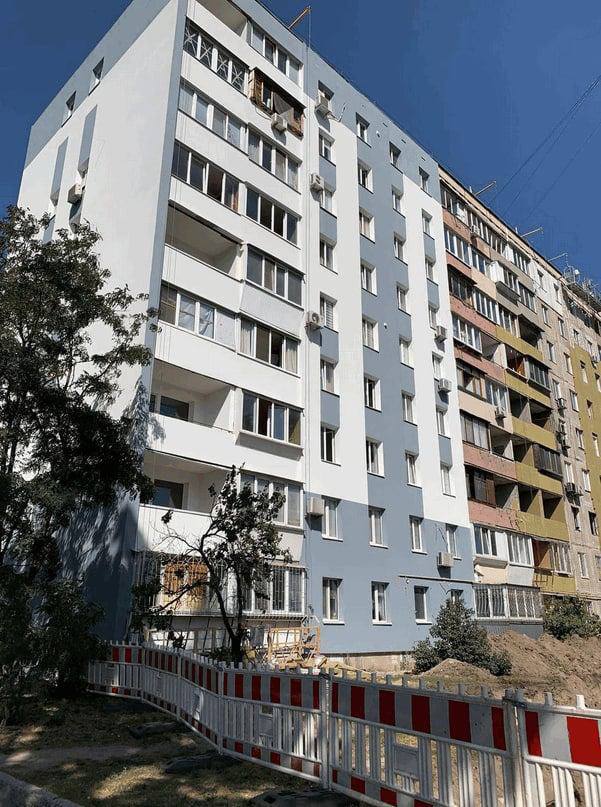 In the capital, 138,000 out of 180,000 schoolchildren will start offline studies. 421 communal schools are ready for the academic year. Only schools with a shelter or if such a facility is nearby within walking distance will be able to work offline. All educational institutions are currently training teaching staff on the organization of work during air alarms.

The red star from the soldier’s cap and the kremlin building were removed from the mosaic of one of the entrances of the capital’s high-rise building. These elements appeared on the house almost half a century ago.

41% of residents of the Irpin region lost their jobs during the war, 28% work for a salary that does not exceed 10 thousand hryvnias. This is evidenced by the results of a survey conducted on the ITV Telegram channel. More than 2,300 subscribers answered the agency’s questions.

lso yesterday, on the Day of Remembrance of the defenders of Ukraine who died in the struggle for its independence, sovereignty and territorial integrity, fallen soldiers were honored at the Alley of Heroes of ATO [Anti-Terrorist Operation] in Irpen. 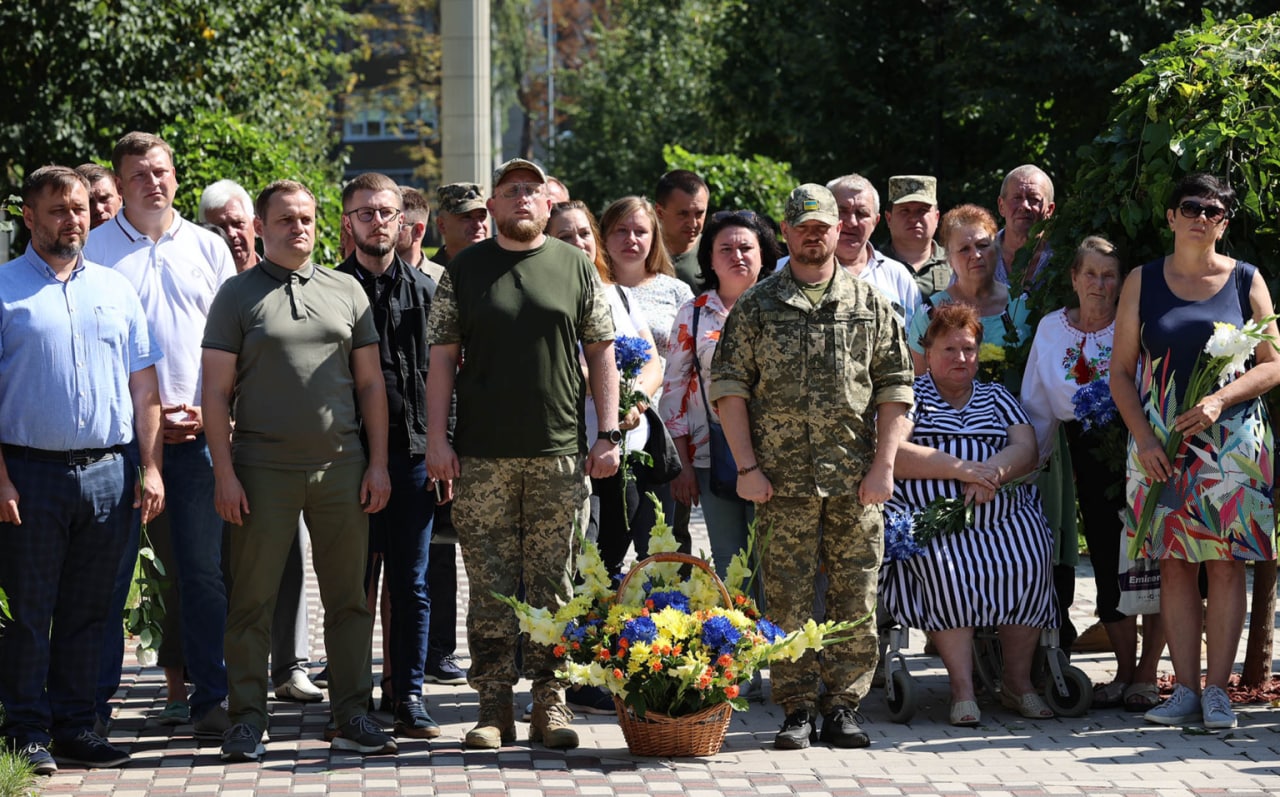 The enemy infantry fighting vehicle and several other vehicles were destroyed by well-aimed shots of the fighters of the 95th separate amphibious assault brigade. Yuriy Kochevenko, an officer of the 95th brigade, reported this on the morning of August 30.

In Zhytomyr, the last respects were paid to 44-year-old serviceman Oleksiy Blizniuk, who died on August 23 in the Kherson Oblast.

In Zhytomyr, volunteers resumed the production of bas-relief “Icons of memory of those who died for the Independence of Ukraine”.

The coordinator of AUI “Active Community” conducted art therapy for children. The children created patriotic drawings for the Armed Forces of Ukraine and mastered a new technique – “Decorations from foamiran”.

Chernihiv Oblast was subjected to mortar and artillery shelling from the territory of the Bryansk region of russia during the night and morning of August 30. At midnight, the enemy shelled the Semenivka community with mortars. The border guards recorded eight explosions from the direction of the russian village of Lomakivka.

In the morning of August 30, the russians fired four artillery shells from the village of Sluchevsk on the Novgorod-Siversk community.

Today, the oblast military administration, in the framework of cooperation with the Lviv company “Valvo”, handed over 200,000 euros worth of supports for power lines to the Chernihiv City Trolleybus Department.

In Nizhyn, 56 streets, the names of which had Soviet and imperial origins, were renamed.

During the day of August 29, the russians shelled the territory of the Sumy Oblast four times. The russian military fired from 10:00 a.m. to 10:00 p.m. in Krasnopillya, Esman, Shalygyne, Znob-Novgorodsk, and Buryn communities. A total of 43 hits were scored. For shelling, the russian military used self-propelled guns and mortars.

Around 1:00 a.m, the russian military fired on the territory of the Krasnopillya community from self-propelled guns. Artillery shelling of the Velika Pysarivska community has been recorded since 8:00 am.

During the day, the russian occupiers fired rocket and barrel artillery at settlements located near the contact line in Chuguyiv, Kharkiv, Bogodukhiv and Izyum raions.

The bodies of 2 women who died as a result of shelling on August 27th were found in the Bogoduhiv raion yesterday.

As a result of artillery shelling by the occupiers of the village of Zolochiv in the Kharkiv Oblast on the night of August 30st, three private houses and power grids were damaged.

In the morning, the russians shelled the center of Kharkiv with artillery. The territory of a kindergarten, a private house, a market and a park came under fire. Windows and the building itself were damaged in the kindergarten. Two people were injured and are in hospital.

During the day, the russian occupiers shelled 15 settlements in the Donetsk Oblast. The enemy shelled peaceful quarters with artillery, rocket salvo systems “Hail”, “Hurricane”, “Smerch”. In total, the russians destroyed and damaged 61 civilian objects, of which 45 were residential buildings, a maternity hospital and other infrastructure.

The occupying army covered Slovyansk with fire three times. Enemies hit with rocket artillery. The city centre was hit and damaged by 20 shells. 4 high-rise buildings, 8 private houses, a maternity hospital, a heating network, a bank branch, a shop, offices, and cars were destroyed. There were no victims due to the fact that many residents evacuated in time, the message emphasizes.

The enemy tried to conduct aerial reconnaissance of the UAV in the Bogorodichny raion. The aircraft was destroyed by Ukrainian defenders. Enemy units made an attempt to conduct an assault in the direction of Shnurky, but were unsuccessful and withdrew.

In the Kramatorsk direction, the occupiers shelled the raions of Zvanivka, Siversk, Verkhnokamyansk, and Slovyansk with barrel and jet artillery. Airstrikes were carried out near Hryhorivka and Pryshyb.

The occupiers waged offensive battles in the directions of Zaytsevo, Shumy, and Kodem. They were repulsed and retreated.

In the Avdiiv direction, artillery shelling continues in Opytne, Pervomaiske, Avdiivka, Maryinka, Novooleksandrivka, Vodyane, Novomykhailivka and Tonenke settlements. The enemy waged offensive battles in the direction of Maryinka and Novomykhailivka, had no success, and retreated. Led reconnaissance in the direction of Opytny.
On August 29th, the russians killed 2 civilians of the Donetsk oblast: in Rozdolny and Severny. 4 more people were injured.

Since February 24, the russians have killed 777 civilians of the Donetsk Oblast, and wounded another 1,984.

Two schools, the Palace of Sports and the Palace of Culture were damaged by russian shelling today in Druzhkivka. School No. 8 was completely destroyed. It was recently renovated and was preparing to start the training process on September 1st. According to preliminary information, there are no civilian casualties.

A meeting was held regarding the state of affairs in the sphere of housing and communal services in Kramatorsk. In the city, consumers are provided with all communal services, with the exception of gas supply. Communal workers promptly respond to the destruction caused by the russians: immediately after fixing the facts of property damage, residents are provided with the necessary assistance. Applications for inspection of damaged/destroyed housing are accepted at the number of the Contact Center – +380990991505 or through the Diya application. Trolleybuses provide transportation for passengers, travel is free. The teams of electricians of the Kramatorsk district of power networks are working in an intensified mode.

Residents of Kramatorsk are invited to evacuate with resettlement in the communities of Kirovohrad Oblast — phone number for registration is +380505448692 (08:00-17:00).

The AUI “Active Community” coordinator delivered another batch of humanitarian aid to the residents of Kramatorsk.

For a long time, the Pokrovsk community has been closely cooperating with the “Nova Ukraine” charitable foundation, which delivers humanitarian aid to the city. This time, benefactors handed over an ambulance to Pokrovsky doctors.

In the Bakhmut direction, shelling from tanks, barrels and rocket artillery was recorded near Soledar, Dolyna, Zaytsevo and Bilogorivka. The enemy carried out airstrikes in the areas of Soledar and Kodema settlements, as well as a rocket attack near Kostyantynivka.

Yesterday evening, an ambulance took a woman from Mariupol to hospital #2. Russian doctors left the woman on a bench near the therapeutic department unattended for the whole night.

The collaborative city authorities have published an additional list of 10 buildings that are planned to be demolished in the near future.

Yesterday in Mariupol, a photo was taken with the Ukrainian flag almost in the heart of the occupation. The photo was released when people were already out of danger. 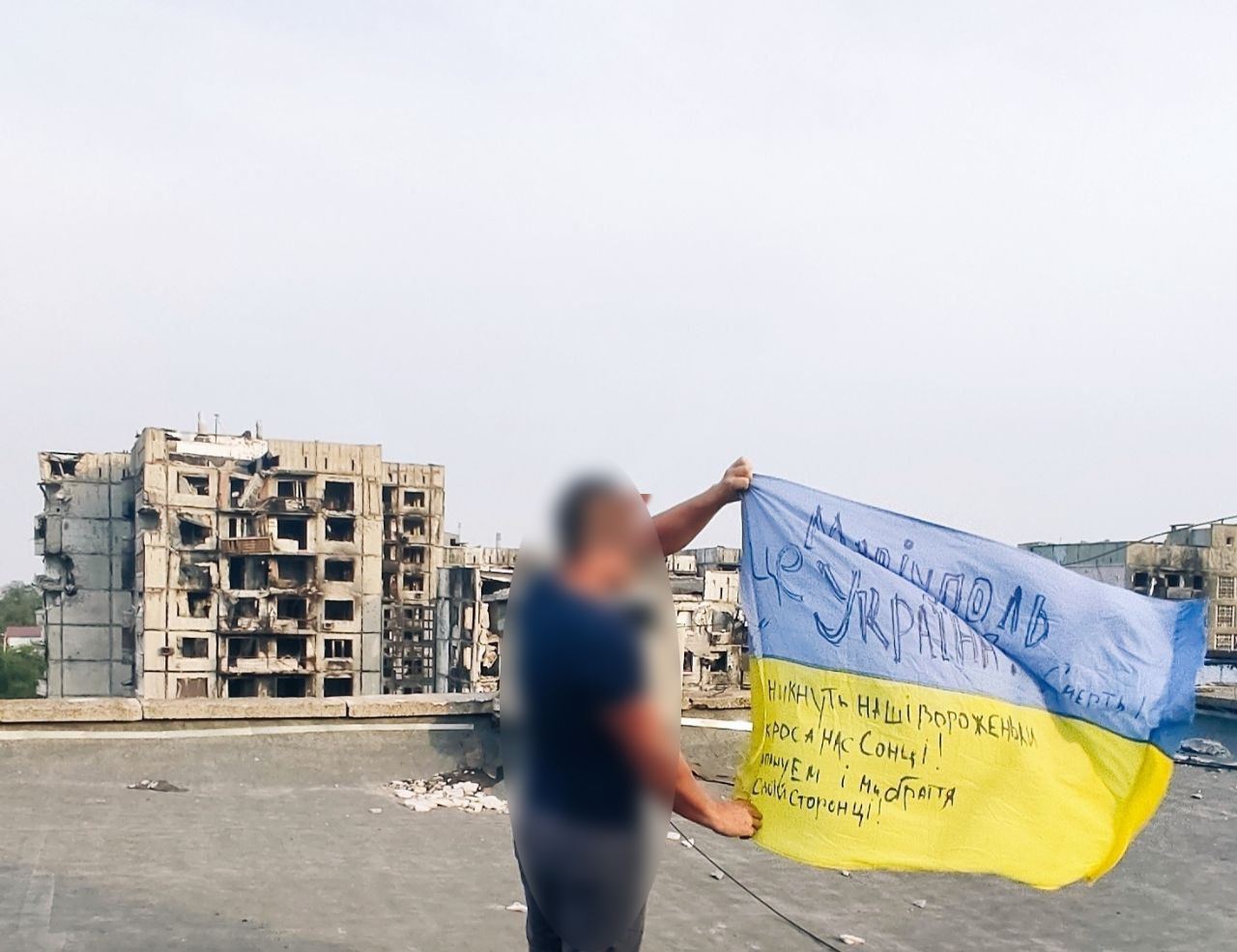 Farmers from the occupied Luhansk Oblast are going to release cows for meat because the price of milk is 5 times lower than the market price.

On September 1st, only eight schools and 6 kindergartens will open in Lysychansk. Out of nine thousand students, only two thousand will sit at their desks.

On the night of August 30th, the russian military struck the outskirts of Zaporizhzhia. In particular, the occupiers shelled the outskirts of the Shevchenkiv Raion. Objects of civil infrastructure were destroyed: a gas station and an adjacent building. Only about 10 meters separated the funnel from the projectile and the container with gas. There were no casualties or injuries.

A local resident was detained for correcting rocket attacks on Zaporizhzhia, the Zaporizhia Oblast Military Administration reports. The man collected intelligence on the deployment, movement and armament of the Armed Forces of Ukraine in the southern direction. Through a closed telephone channel, he transmitted the collected information to his russian curator, and also provided him with marks of objects on electronic maps.

The Mayor of Melitopol, Ivan Fedorov, reported that on August 29th, on the way out of the city of Vasylivka, Zaporizhzhia oblast, the Russian military shot an evacuation column.

On August 29th, after 3:15 p.m., Mykolaiv came under enemy fire with sixteen S-300 anti-aircraft missiles, which resulted in numerous destruction and damage to private and multi-story buildings, and transport infrastructure facilities. As a result, two people died and 24 were injured.

Yesterday at 09:17 and 15:20 enemy shelling was recorded on Ochakov and hit the aqua zone.

Yesterday afternoon, as a result of enemy shelling of the village of Chervone of the Voskresen community, a house was partially destroyed, and a gas pipeline was damaged. Also, on the evening of August 29th, at 4:02 p.m. outside the village of Kalynivka, a fire broke out in an open area as a result of shelling.

Yesterday evening, the russians attacked the Bashtan raion with two S-300 anti-aircraft missiles. As a result of the explosion of rockets, there was damage to private houses.

The villages of the Berezneguvat community, located on the demarcation line, remain under constant shelling.