Operational information from the regions of the Active Community network 04.12.2022

The two hundred and eighty-fourth day (28) day of the heroic resistance of the Ukrainian people to a russian military large-scale invasion continues.

The two hundred and eighty-fourth day (28) day of the heroic resistance of the Ukrainian people to a russian military large-scale invasion continues. 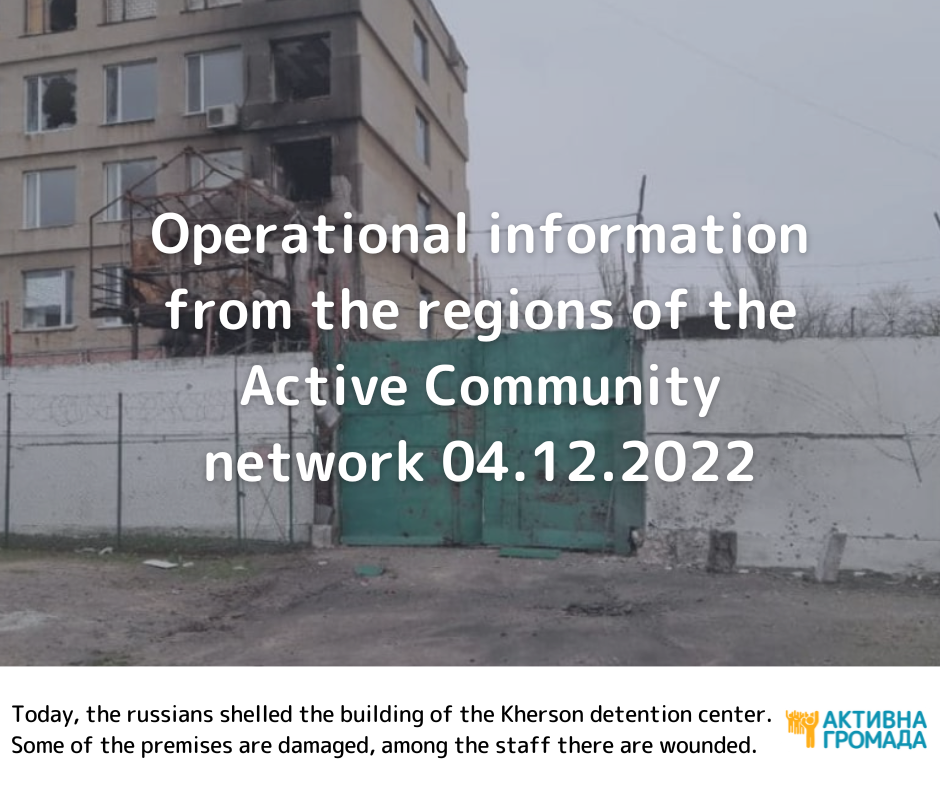 In Kyiv, the Regional Directorate of the “North” Territorial Defense Forces was presented with the Battle Flag.

Since the beginning of russia’s full-scale invasion of Ukraine on February 24, more than 207 thousand internally displaced persons, including more than 36 thousand children, have arrived in Kyiv. Most IDPs are from the Donetsk Oblast (more than 150 thousand people), also from the Luhansk, Kharkiv, Kherson, and Zaporizhzhia oblasts.

Emergency power outages continue to be in effect in the Kyiv Oblast.

In the village of Myla, the roof and supporting walls of the sixth floor of the damaged high-rise building are being dismantled for their further restoration. The small village was constantly shelled by the occupiers during March this year. The shelling caused a fire in the house. Part of the apartments on the 5th and 6th floors burned up. Reconstruction of the high-rise building began in late November. The works at the site continue even on weekends. Part of the funds for restoration were allocated from the reserve fund of the state budget. 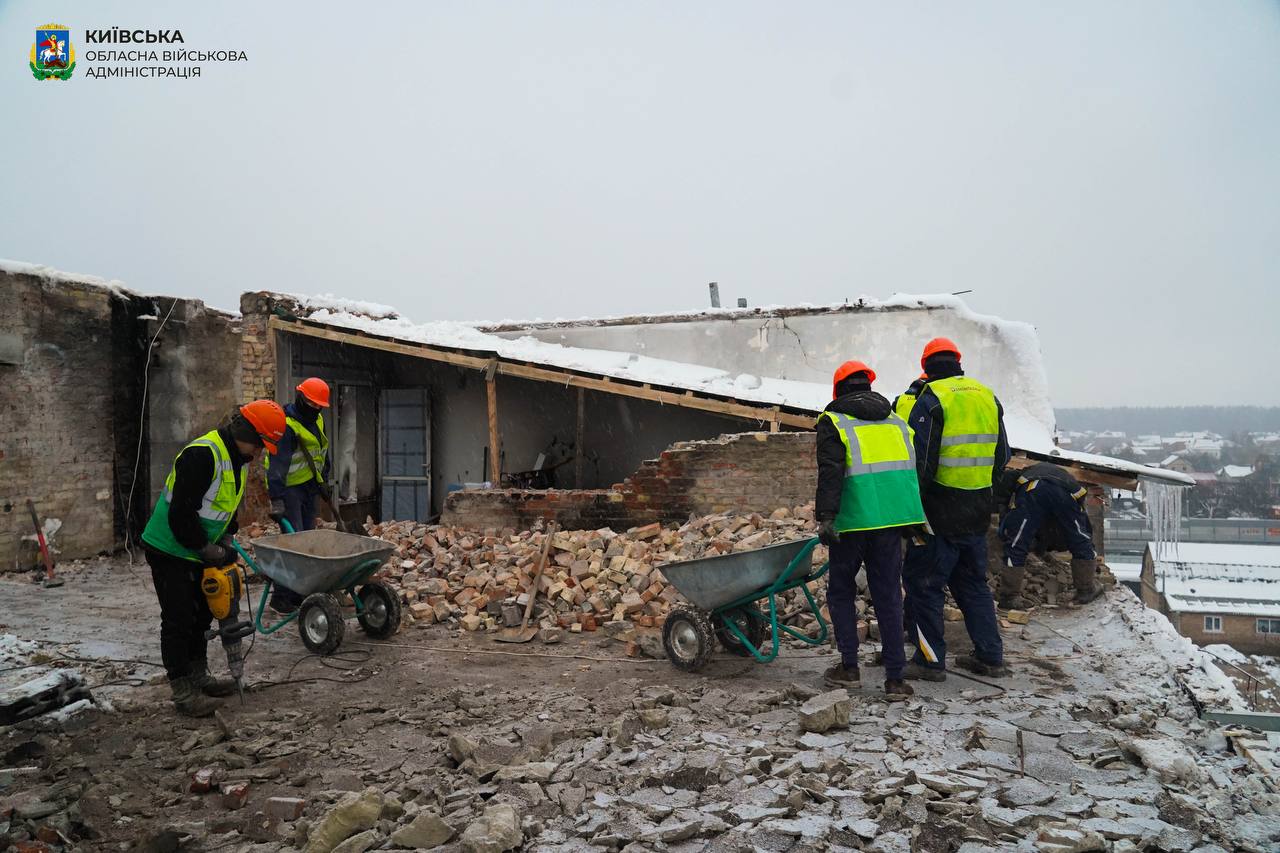 According to the National Police, the total number of road accidents in the Kyiv Oblast during the period of blackouts has increased six times. And those with victims – by 55%.

Residents of the Zhytomyr Oblast are invited to join the information campaign in support of the Armed Forces of Ukraine. As part of the campaign, the Ministry of Defense has developed visual materials, in particular, billboards and city lights to be placed in settlements in all regions of our country.

In Brussels, the European Parliament hosted an exhibition of photographs by Dmytro Kozatskyi (the call sign “Orest”), a defender of Azovstal from Malyn, who was released from russian captivity. Iryna Yurchenko, Dmytro Kozatskyi’s mother, showed a photo of what Dmytro Kozatskyi looked like immediately after his release from captivity. It was a photo evidence of the inhuman treatment and torture in captivity exercised by russians. 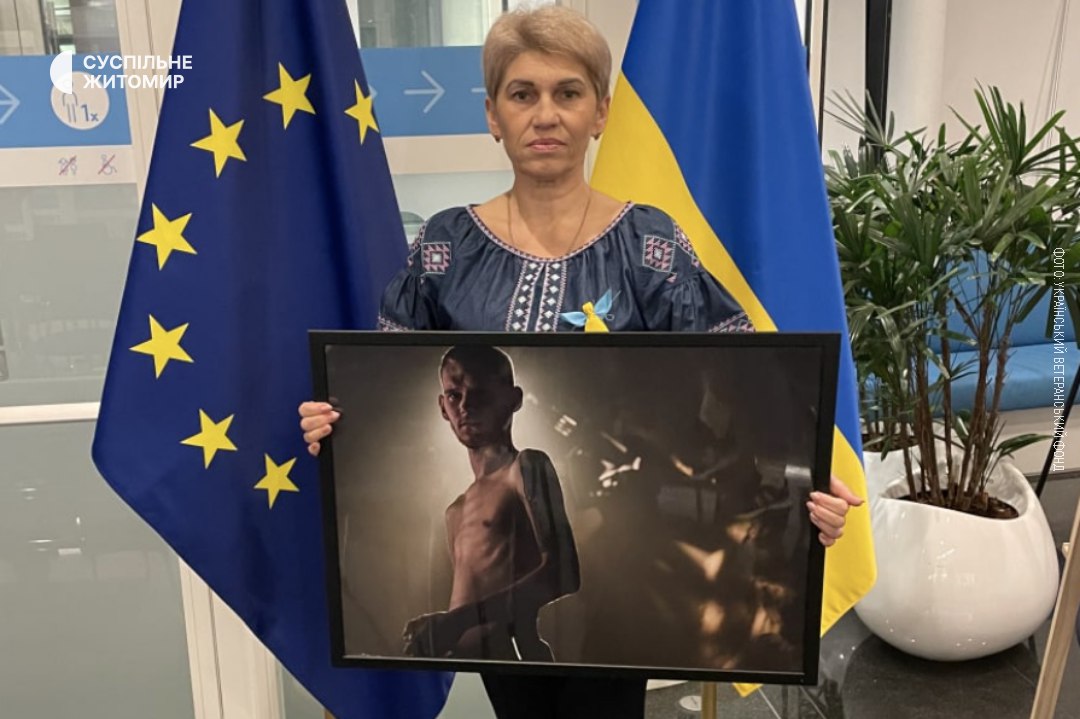 A charity fair called “Strength in Unity” in support of the Armed Forces of Ukraine was organized in the Chudniv Lyceum. They managed to collect almost 37 thousand hryvnias.

Yesterday, Russian troops shelled the border areas of the Chernihiv Oblast. They shelled the Semenivka community with a 120 mm mortar. Border guards recorded one explosion.

Yesterday afternoon, russians shelled the village of Sopych (the Esman community). The buildings of the local enterprise were damaged.

On the night of December 4, russian forces bombarded the territory of the Hlukhiv community with mortars. Also, around 01:20 a. m., small arms were used in one of the villages of the Znob-Novhorodske community. There were no destructions or casualties.

The occupiers are again launching artillery and missile attacks on the Kupiansk Raion.

In Kupiansk-Vuzlovyi, the road surface and transport infrastructure were damaged as a result of shelling.

Around 11 p.m., S-300 missiles launched by the russians damaged windows and roofs in 5 private houses of the Shevchenkove community.

Around 3 a. m., the enemy launched another missile attack at the village of Shevchenkove from the territory of the russian federation. There were no casualties.

The local authorities, together with volunteers, continue the voluntary evacuation of residents due to the increased intensity of shelling. To date, 185 people have expressed their desire to move. The process of evacuation to safer places in the Kharkiv Oblast continues.

Also, during the day, the russians shelled the settlements of the Vovchansk community, as well as and the Kharkiv and Izium raions. No casualties.

During the previous day, russian missiles took the life of one civilian in the Donetsk Oblast. Another 5 people in the oblast were wounded.

In total, since February 24, the russians have killed 1,237 civilians of the Donetsk Oblast, and wounded another 2,680. The number of victims in Mariupol and Volnovakha is currently unknown.

In the Avdiyivka direction, the occupiers are concentrating their efforts on offensive actions, trying to improve their tactical position.

In Kurakhove, one person was injured, the amount of destruction in the city is being determined. Mariinka and Georgiivka were also under fire — without casualties.

Over the past 24 hours, units of the Defense Forces of Ukraine repelled the attacks of the invaders in the areas of Mariinka and Novomykhailivka settlements of the Donetsk Oblast.

Another anxious day in Kramatorsk. Explosions were heard both at night and in the evening. There are no reports of casualties or damage.

In the Horlivka direction, as a result of artillery fire, 1 person died in Predtechyne of the Kostyantynivka community. During the day, Toretsk was hit twice by “Grad” MLRS — 2 high-rise buildings, 2 private houses and farm buildings were damaged. There was no information about the victims.

In the Lysychansk direction, there are again numerous shellings of the Torske and Zarichne Lyman communities. The consequences are clarified.

The team of «Active Community» in Kramatorsk provided assistance to families with children who remained in the city under shelling. Thanks to the efforts of foreign volunteers, a shipment of diapers, hygiene products, and children’s items was delivered to Kramatorsk. Activists distributed them to the residents of Kramatorsk.

Since January 1, the enemy is going to withdraw the hryvnia from circulation in the occupied territories of Luhansk Oblast, they offer to exchange money at the established exchange rate in local banks.

On December 2, as a result of fire damage to the enemy’s concentration area in the city of Starobilsk, the losses of the enemy amounted to about 30 servicemen wounded and 14 – killed, – reported the General Staff of the Armed Forces of Ukraine.

At night, several hits were recorded in one of the villages of Zaporizhzhia raion. As a result of explosions on the territory of private buildings, windows were broken, roofs of private residential buildings were damaged, and power lines were damaged. Firefighters extinguished the fire. Fortunately, all people remained alive and unharmed.

Yesterday, one of the settlements of the Kutsurub community came under enemy fire. There are no casualties.

Tonight, the enemy fired a mortar attack on the water area of ​​Ochakiv community. There are no casualties.

On 4 December the russian military shelled the building of Kherson detention center. Some of the premises were damaged, there are wounded among the staff. 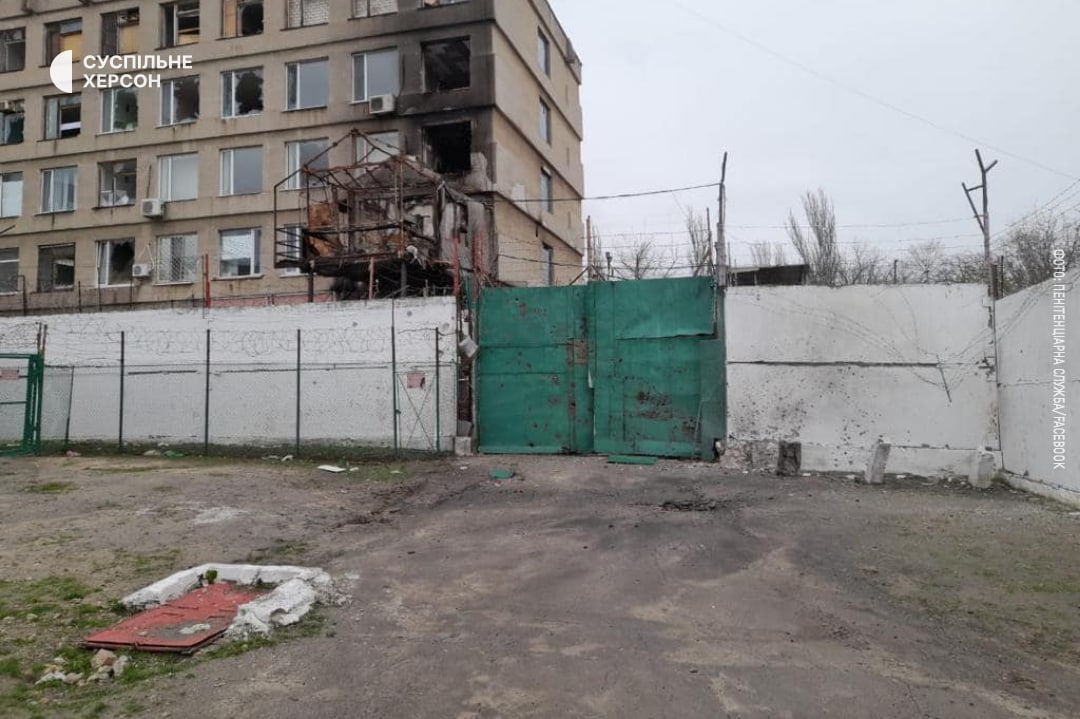 Today, as of 14 o’clock, the russian military shelled Kherson 5 times. A high-rise building in Tavriyskyi district was hit, as well as residential areas along the Dnipro river. No one was injured. According to the Department of Civil Protection of Kherson City Council, from November 20 to December 4, the russian military shelled Kherson 169 times. 19 people were killed, 39 injured, including one child.

On 3 December, the russian troops shelled the village of Respublikanets of the Myliv community with tanks. A man was killed. His wife was seriously injured and is in intensive care in Kryvyi Rih.

The works on restoration of electricity supply continue – 85% of the city is now with electricity in Kherson.

The russian troops shelled Nikopol region 5 times since the morning of December 4. They hit Nikopol and the Pokrovsk community. A 23-year-old man died in Kapulivka village. He was working in his yard when a russian shell hit him. 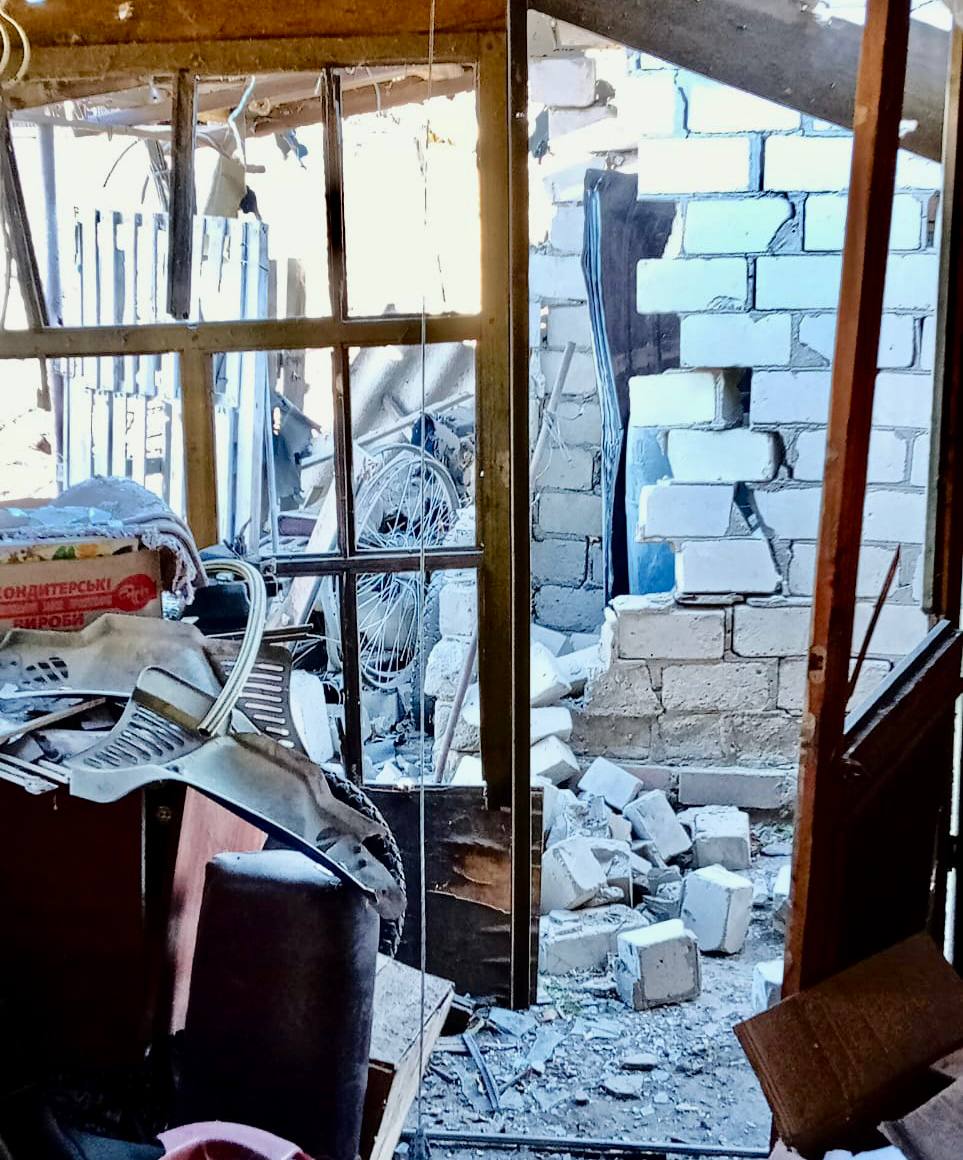 On November 30, Yevhen Kaseev, a resident of the Oleksandriya community, was seriously wounded at the frontline in Donetsk oblast. He died from injuries incompatible with life. Eternal glory to the Hero.

According to the decision of the President of Ukraine Volodymyr Zelenskyi, the 121st separate territorial defence brigade of Kirovohrad oblast received the battle flag.

Day of mourning is held in the Koziatyn community of Khmilnyk raion. The fallen warriors Volodymyr Kravchenko born in 1998 and Volodymyr Tsymbarovych born in 1977 were laid to rest.

The Polish city of Shchavnytsia, which is a twin city of Khmilnyk, handed over 6 generators, as well as school supplies and sweets, which were received by children from IDP families.

The hot lunches are distributed free of charge in Poltava. The food and equipment were brought to Poltava by Dutch volunteers and two foreign charitable foundations. Everyone who needs it can get food near the regional center of aesthetic education.

Military veterans of Rivne oblast will be taught to start their own business. The program of specialized courses of professional adaptation for the military and their families was developed by the social protection authorities together with the Rivne Professional College of the National University of Life and Environmental Sciences of Ukraine. All participants will receive certificates. The course program also includes issues of legal support, economic feasibility, marketing and others.

On the eve of the Day of the Armed Forces of Ukraine, students and teachers of Radyvyliv Lyceum №2 collected kits for soldiers who defend our land in flashpoints. The schoolchildren collected essentials for the soldiers and their colleagues. The part of the gift cargo are drawings and letters.