Operational information from the regions of the Active Community network 05.12.2022 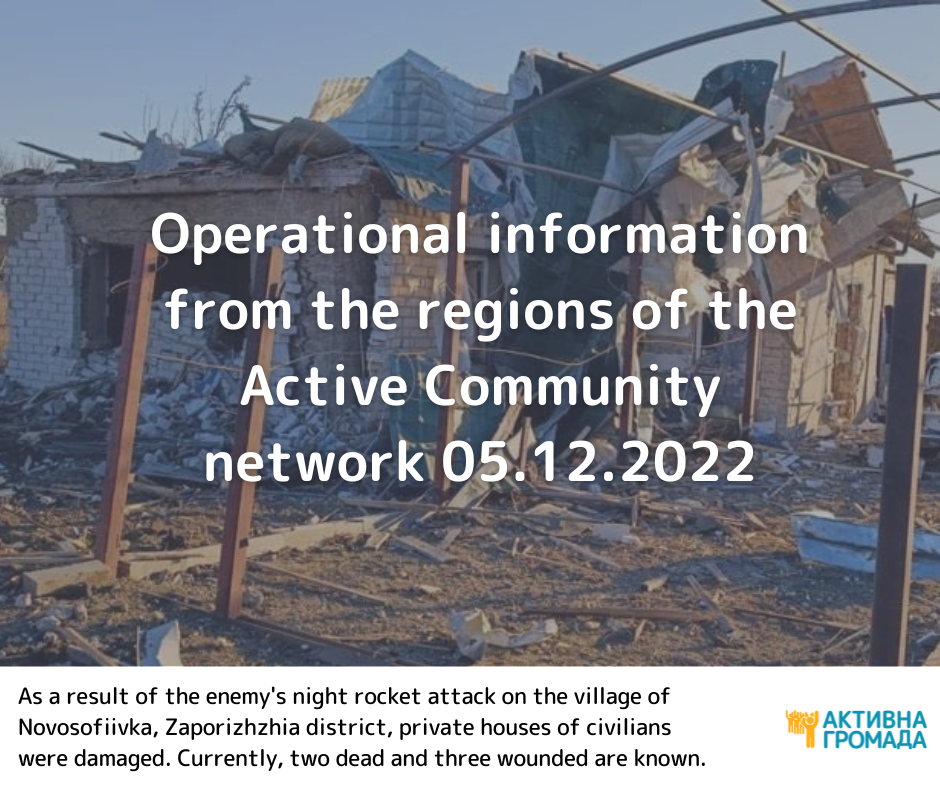 During the day, due to the attack by the russians, the Kyiv metro worked in a limited mode, as a large number of people used it as a shelter.

This afternoon, the air defense forces of Ukraine shot down 9 enemy missiles over the Kyiv Oblast. 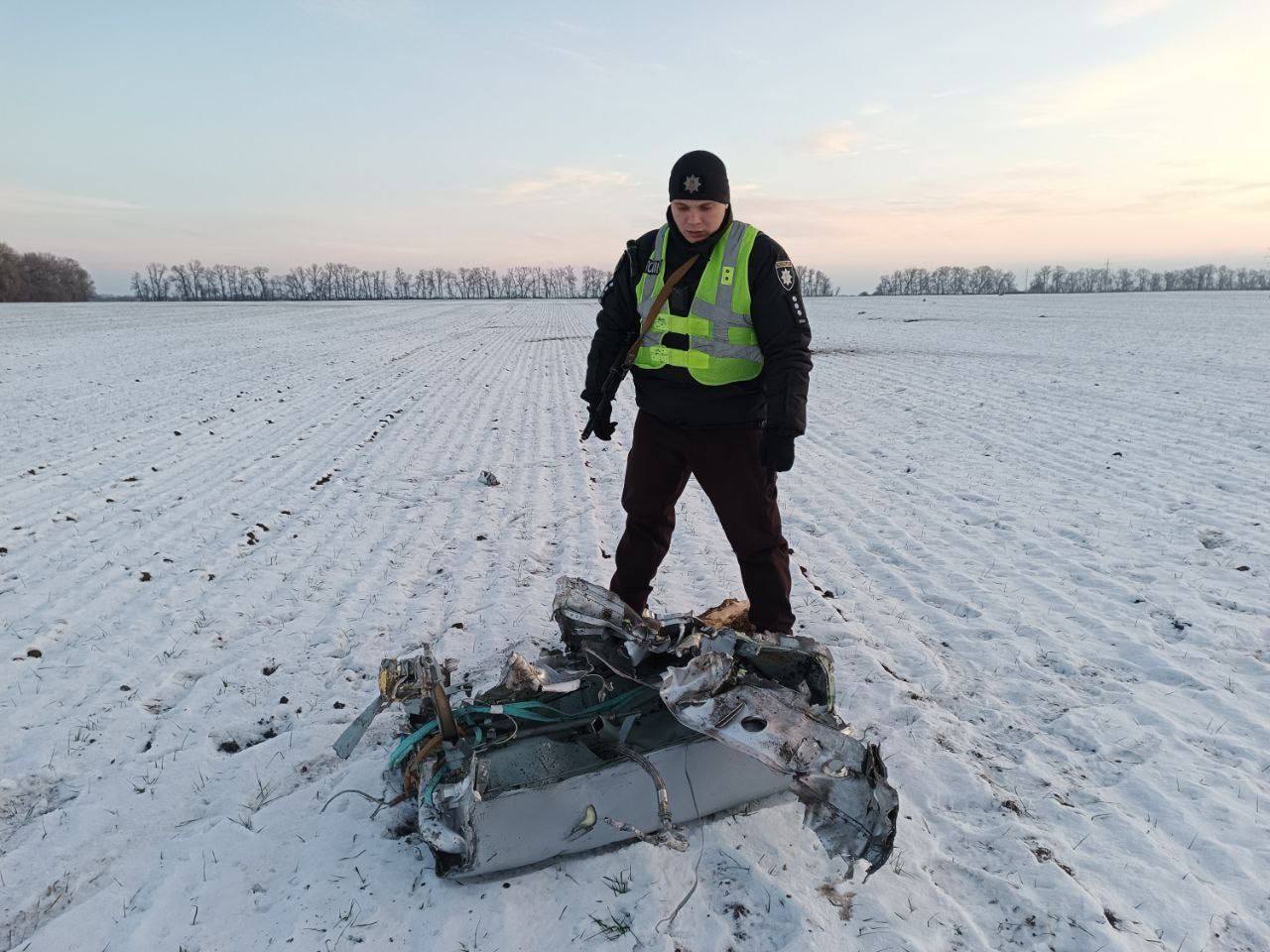 The russian occupiers, while staying in Hostomel, stole spare parts from the world’s largest aircraft AN-225 “Mriya”. They removed the most valuable main components from it.

Starting this week, medical teams will be working in the “points of invincibility” in Irpin.

Today, the russians shelled the border areas of the Chernihiv Oblast. The Horodnia and Koriukivka communities came under fire.

Yesterday, in the Chernihiv Oblast, they said goodbye to their two countrymen who were killed in action in the Donetsk Oblast.

Units of the State Emergency Service carried out destruction of ammunition by detonation.

In the Nova Sloboda community, 7 houses were damaged. 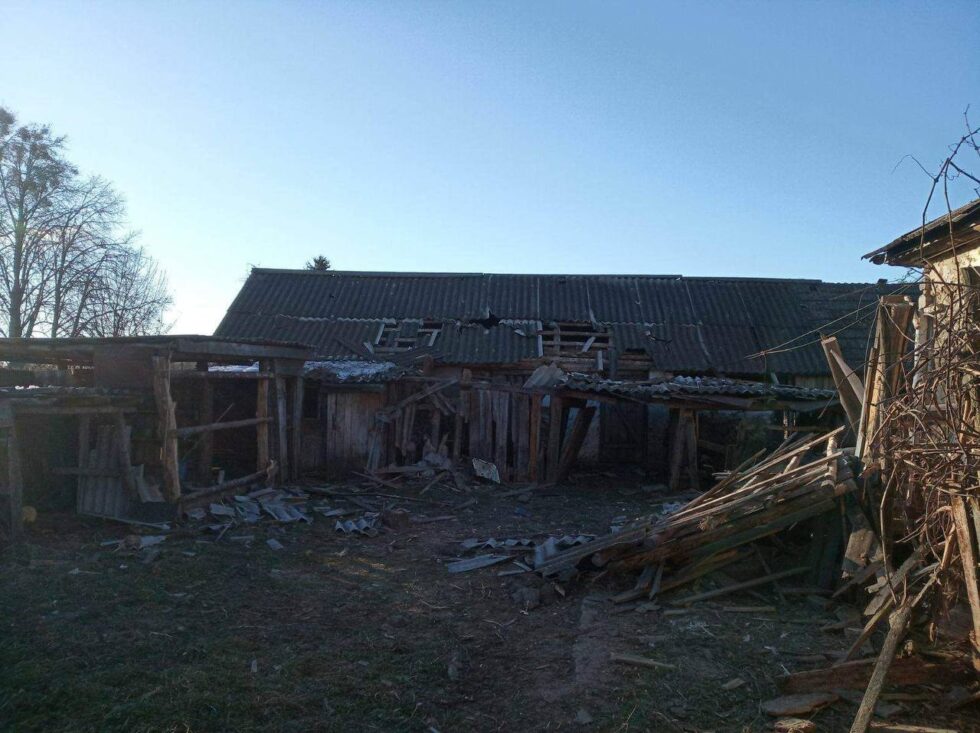 This morning, the russians shelled the Bilopillia, Velyka Pysarivka, and Nova Sloboda communities in the Sumy Oblast. A power line was damaged in the border village of the Bilopillia community.

As a result of today’s attacks by the russians, the Sumy Oblast was completely left without power supply. Emergency power outage was used to prevent disruptions in the operation of the unified energy system of Ukraine.

The occupiers continue to attack the settlements of the Kupiansk Raion. After 4 o’clock in the morning, the russians hit the civilian infrastructure of Kupiansk with the S-300 type missiles. According to preliminary data provided by the law enforcement officers, a woman was killed as a result of the occupiers’ strikes in Kupiansk. The shelling caused a fire at the vehicle service station, where a car was burned down. Also, roofs of private houses were damaged.

In addition, the occupiers carried out artillery strikes on settlements in the Kharkiv, Chuhuiv, and Izium raions.

During the day, 2 people were injured as a result of the detonation of explosive devices: a 52-year-old man in Merefa and a 66-year-old man in the village of Donetske in the Izium Raion. Both were hospitalized in medical institutions, their condition is assessed as moderately severe.

At night, the enemy attacked an industrial enterprise in Kryvyi Rih. One employee was killed and three others were wounded. The destruction is massive. The russians also shelled the city of Marhanets.

During the day, the air defense forces of the “East” command shot down 15 russian missiles. Yesterday, a unit from the oblast destroyed a russian Ka-52 helicopter in the combat operations zone.

Emergency power outages are in effect in the oblast. Part of Kryvyi Rih is without electricity, some boiler houses and pumping stations are off. The system’s operation is maintained with the use of generators. Water supply has been arranged in one of the districts of the city. Electric transport does not operate in Dnipro and Kryvyi Rih due to the problems with power supply. Pumping stations of one of the five water utilities are de-energized. There is no water in the Solone community.

In the east of the Pokrovsk Raion, Kurakhove and Hostre came under shelling: a kindergarten, 4 high-rise buildings, and 7 private houses were damaged. In Avdiivka, there were sporadic hits throughout the night in the old and central part of the town. There has been no information about the casualties.

The situation in the community is fully controlled by the military administration. All services perform their assigned tasks. No facts regarding the casualties have been reported.

The points of invincibility work around the clock.

Evacuation in total darkness. Police crews of the “White Angels” use night vision devices to search for the wounded in the Maryinka community and take them out of shelling

The Pokrovsk community took part in the international conference on the transformation of coal territories.

Due to the increased demolition of buildings in the Livoberezhnyi district, the sewer pipes in the area of Meotida Boulevard could not withstand, and the streets and basements of the buildings were flooded. Residents of Meotida Boulevard are freezing in their own homes. They tape the windows, but it doesn’t help. The temperature in the apartments is +1°C (+33,8°F).

Residents of Mariupol write that corpses of people killed by russians during the siege are still found in wells.

In the Luhansk Oblast, in the Svatove and Kreminna directions, the russian invaders are on the defensive.

The situation in Bilohorivka is the most difficult. The russians are shelling the village around the clock, but they are not succeeding.

The Armed Forces of Ukraine destroyed a russian “Alligator” helicopter in the Luhansk direction.

The russian military continues to shell Zaporizhzhia and settlements of the Zaporizhzhia Oblast, including using S300 missiles.

As a result of a night rocket attack by the enemy on the village of Novosofiivka (Zaporizhzhia Raion), private houses of civilians were damaged. According to preliminary information, two people were killed and three others were injured (among them a one-year-old child).

In Zaporizhzhia, an infrastructure object – a private enterprise – was damaged as a result of the missile hit. There was no information about the victims.

Due to the massive missile attack on Ukraine, a large part of consumers in one of the districts of Zaporizhzhia was temporarily cut off.

Today, as of 2 p.m., the russian military shelled Kherson 5 times. The enemy hit a high-rise building in Tavriyskyi microdistrict and residential districts along the Dnipro River. There were no victims. From November 20 to December 4, the russian military shelled Kherson 169 times. As a result, 19 people died, and 39 others were injured, including one child.

The russian army shelled an oncology clinic in Kherson. 46 windows and external wall cladding of some buildings were damaged. The steam boiler room of the facility was also partially damaged.

In the temporarily occupied territory of the Kherson Oblast, the occupiers are forcing locals to send their children to schools to study according to the russian curriculum by threatening to deprive them of parental rights. This was announced by the General Staff of the Armed Forces of Ukraine.

Over the past day, the Armed Forces of Ukraine repelled 13 attacks by the russian military.

People are holding on, trying to evacuate.

Demining works are ongoing in Kherson Oblast. The explosive workers of the National Police destroyed 1,250 dangerous objects. They have already examined 523 hectares of territory, from which 4,200 explosive items were seized. Pyrotechnicians of the State Emergency Service examined the territory of 753 hectares, discovered and neutralized 7,300 explosive objects. This is reported by the Kherson Oblast Military Administration.

The notification system is being restored in Kherson. Therefore, the residents will hear one siren at a time. If there is an air alert, a lot more sirens will be sounded.

In the temporarily occupied Skadovsk Raion (Kherson Oblast), the russian military strengthened the police regime. People were forbidden to move between settlements, and movement within their borders was allowed only during the day.

The russian military continues to loot the temporarily occupied settlements of the Kherson Oblast. The invaders also shelled the liberated territory of the oblast 46 times.

The occupation authorities want to build new settlements on the section of the Arabatska Strilka spit, located in the captured Genichesk Raion (Kherson Oblast).

As of 8:00 a.m. on December 5, no shelling was recorded on the territory of the Mykolaiv Oblast.

In the Mykolaiv Oblast, the restoration of the destroyed water main and the construction of “Points of Invincibility” are continuing. People are rebuilding their own homes, volunteering, and working for a common victory in any circumstances.

Before the full-scale war, up to 500 people lived in the village of Blahodatne (Mykolaiv Oblast). As of December 4, 2022, there is no one left here. People were forced to evacuate from the settlement under russian shelling. They moved on foot so that the russian military would not notice the cars.

A soldier from the Poltava Oblast died as a result of mortar shelling near Bakhmut. On December 3, they said goodbye to Serhii Pastukh in the village of Savyntsi of the Myrhorod Raion. The soldier died on November 28

Serhii Mishchenko, a soldier and father of many children from the Poltava Oblast, died. In battles, he destroyed 35 units of enemy equipment. Serhii Mishchenko with the call sign “Buhor” was the chief sergeant-commander of the 45th separate artillery brigade. On December 1, the soldier’s life ended. He died while performing a combat mission in the village of Kovalivka of the Svatove Raion of the Luhansk Oblast.

Vitaly Kravchuk from the Poltava Oblast died in the Russian-Ukrainian war. Vitaly Kravchuk was from the Zavodske community. A soldier died on December 1 in the area of ​​Lyman 1 settlement of the Kupiansk Raion of the Kharkiv Oblast.

Soldier Viacheslav Kushch from Kremenchuk was mobilized on February 24. Unfortunately, on June 26 near the village of Sulyhivka in the Kharkiv Oblast, he died as a result of his injuries.

A chai of invincibility points has been launched and is operating throughout the oblast. They have heat, water, and electricity. Communities should provide these points with amenities as much as possible. Along with the addresses of invincibility points, this link allows you to find pharmacies, shops, gas stations and banks that will work even during long-term blackouts of electricity, heat, and water.

Another Invincibility Point was opened in the city of Kalynivka of the Khmilnyk Raion. The rescuers of the Kalynivka Raion have set up a Point of Invincibility, where you can warm up, drink a glass of hot tea or coffee, and charge your phone.

The Point of Invincibility tent was set up near the Kalynivka Technological College. Kalynivka rescuers will be on duty here around the clock. The point of invincibility is equipped with a generator and a boiler for heating.

Military counterintelligence officers of the Security Service of Ukraine, together with operatives and investigators of the Rivne Raion Police Department, exposed a 68-year-old russian woman, a native of the Russian Federation, who publicly distributes materials with pro-Russian narratives, demonstrating her anti-Ukrainian position and promoting the ideas of the “Russian peace” through the banned in Ukraine social network “Odnoklasnyki”. The woman is an employee of one of the institutions of higher education in Rivne.