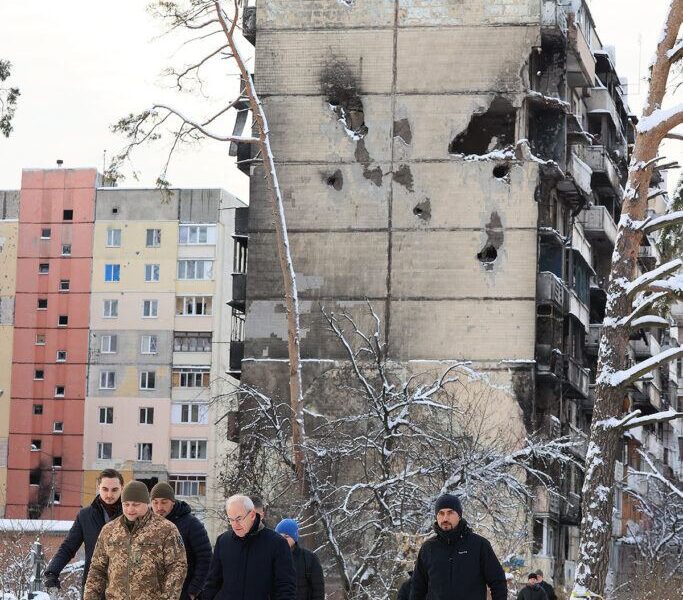 Operational information from the regions of the Active Community network 06.12.2022

The two hundred and eighty-sixth day (286) day of the heroic resistance of the Ukrainian people to a russian military large-scale invasion continues.

The two hundred and eighty-sixth day (286) day of the heroic resistance of the Ukrainian people to a russian military large-scale invasion continues. 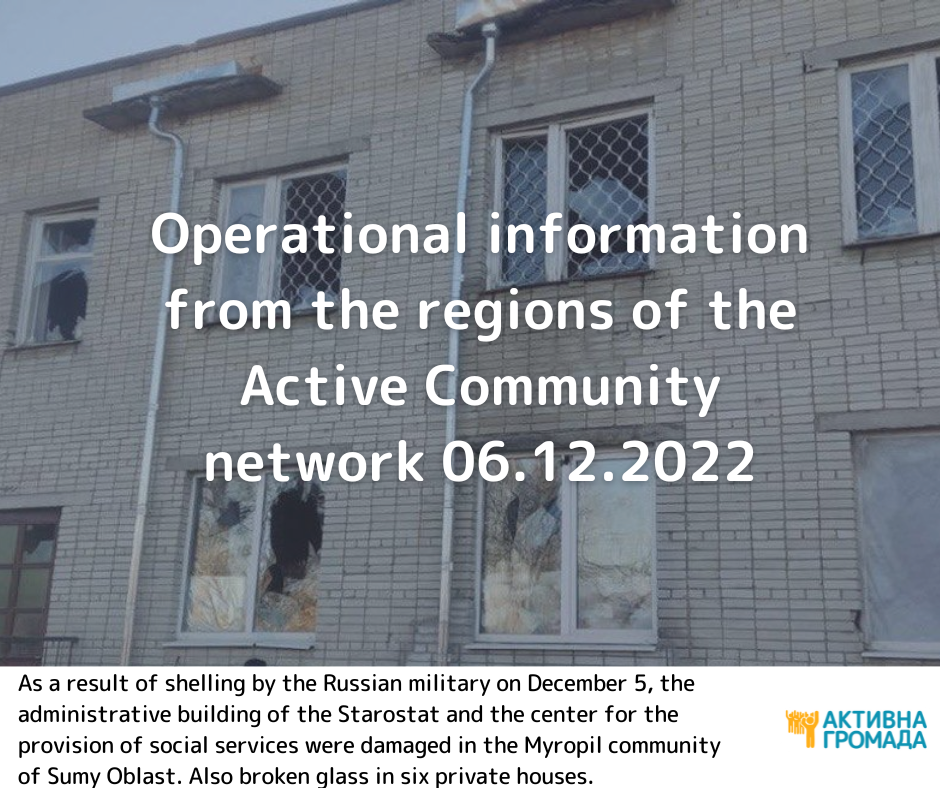 Prime Minister of Moldova Natalia Gavrilița paid a working visit to Kyiv. She also visited Bucha and Irpin, which suffered from the russian aggression.

A Kyiv resident, who publicly supported the actions of the aggressor country, was served a notice of suspicion. The man repeatedly posted anti-Ukrainian publications on his social network page, justifying and recognizing the legitimacy of the armed aggression of the russian federation against Ukraine, as well as the actions of the russian army in the temporarily occupied territories of our country. The supporter of the “Russian world” turned out to be a 67-year-old resident of the capital, a native of the Sumy Oblast.

A photo of people working in the Kyiv subway during a massive air raid alert has appeared online. 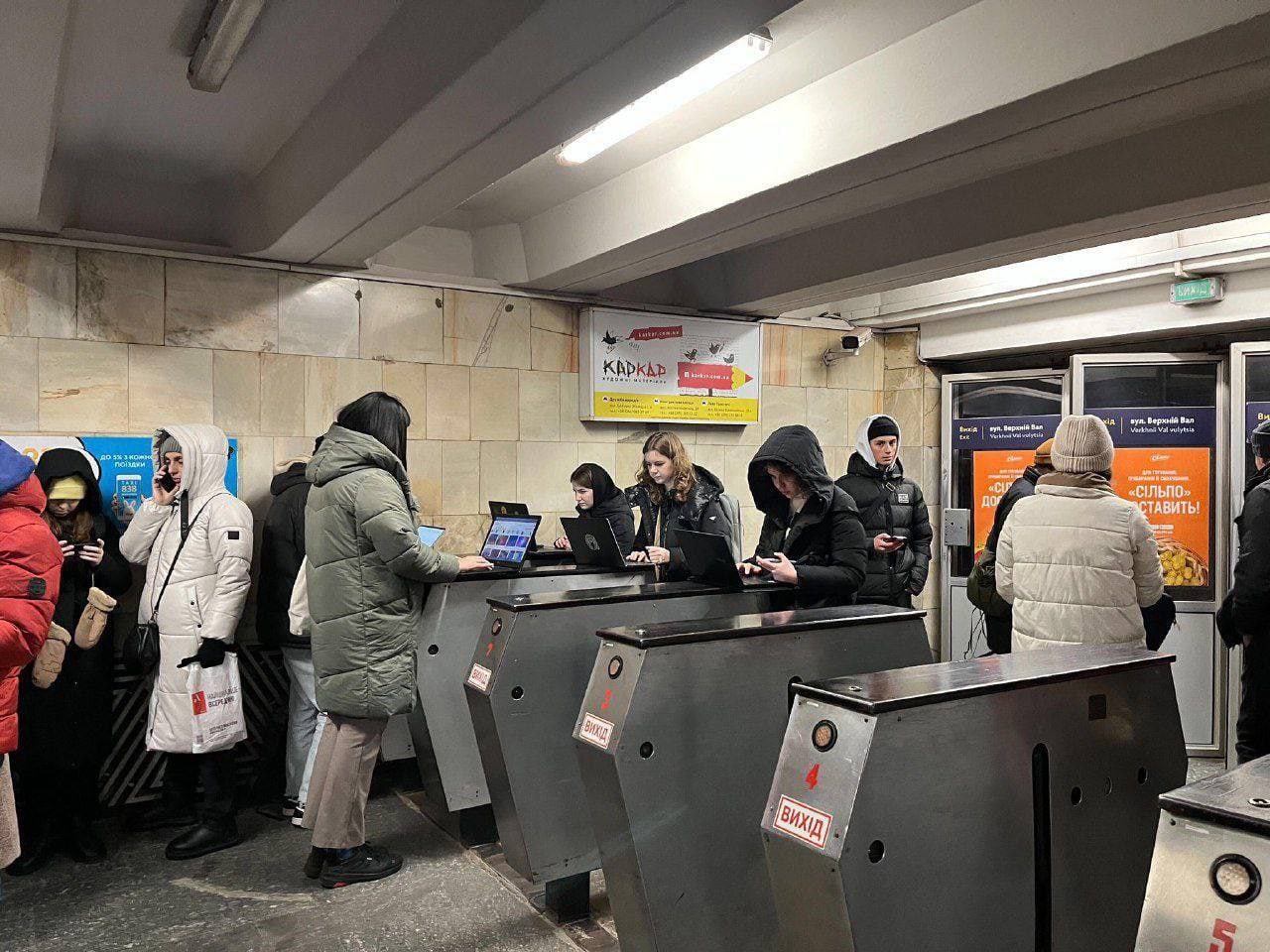 As a result of yesterday’s attack by the russians in the Kyiv Oblast, power facilities were hit. The liquidation of the consequences is currently underway. According to the decision of Ukrenergo, emergency power outage schedules are in effect in the oblast.

Teodoro López Calderon, the Chief of the Defense Staff of the Spanish Armed Forces, visited Irpin. 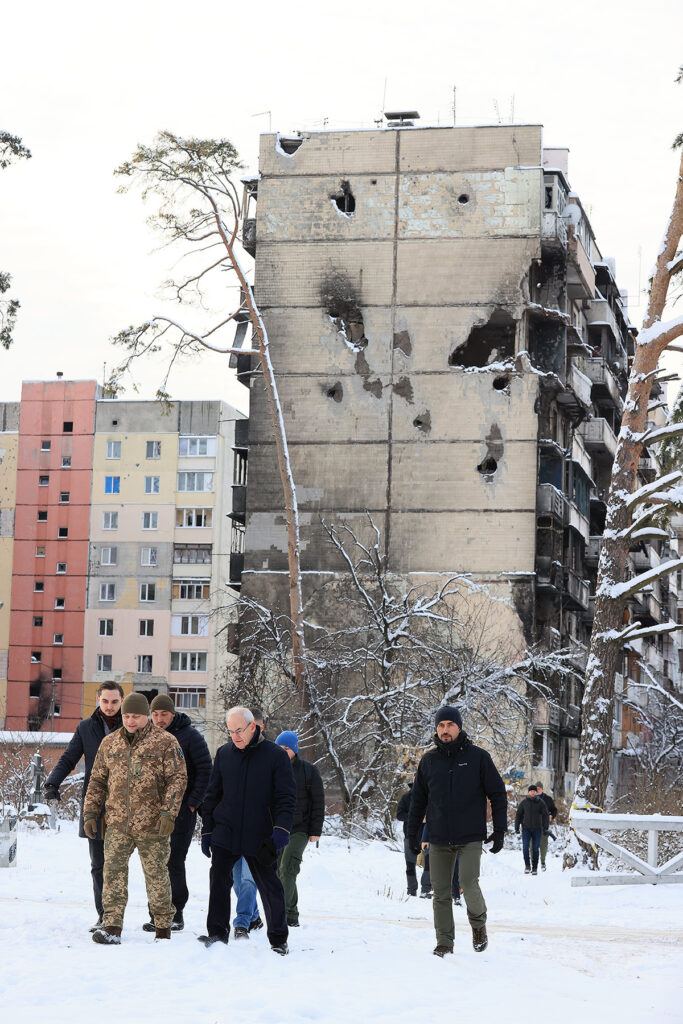 In Bilohorodka, a girl was poisoned with carbon monoxide as a result of improper operation of a gasoline generator. Rescuers handed the victim over to emergency medical personnel and she was hospitalized into the Boyarka Central Raion Hospital.

Yesterday, residents of Chernihiv said goodbye to their fellow countryman Oleksandr Sukach, who was killed in action in the Luhansk Oblast.

Today in Chernihiv, on the occasion of the Day of the Armed Forces of Ukraine, celebrations were held with the participation of the city and oblast leadership, the military, clergy, and the public. 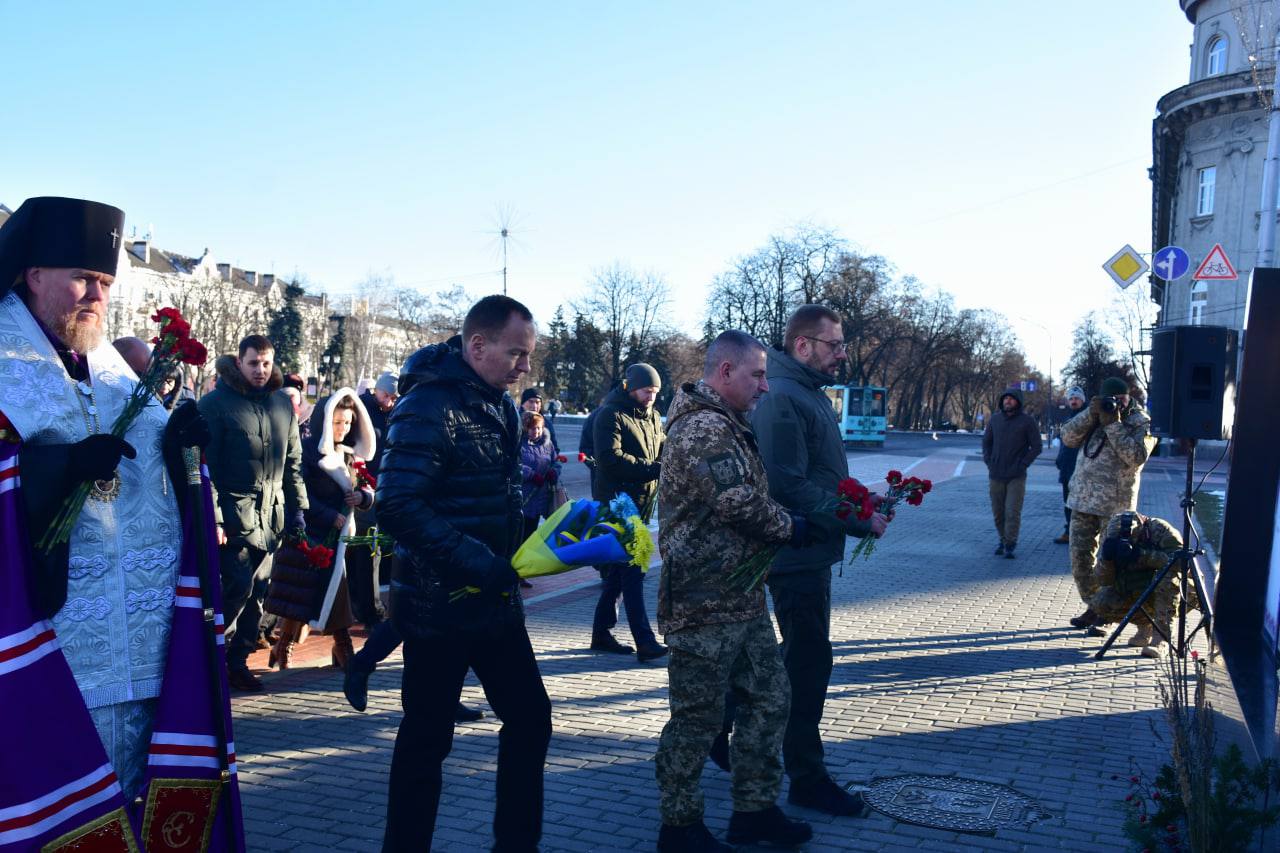 The russian military shelled the Hlynsk Hermitage monastery in the Shalyhyne community. They fired 15 MLRS rockets at the border territory. The administrative building and outbuildings were damaged. Two cows were killed by shrapnel, three more animals got wounded.

As a result of the shelling of the Myropillia community by russian troops on December 5, the administrative building of the starosta and the center for the provision of social services were damaged. Windows in six private houses were smashed. One house is beyond repair. The family that lived there was not affected, because they temporarily moved to Sumy.

A resident of Shostka was sentenced to 15 years in prison for high treason. He collected data on the places of deployment of the Armed Forces of Ukraine.

The Chuhuiv, Kharkiv and Kupiansk raions are under occupiers’ artillery fire again. As a result of the russian shelling a man was killed in in the village of Obukhivka in the Kupiansk Raion. Also, private households, outbuildings, and warehouses were damaged.

Voluntary evacuation from the Kupiansk Raion to safer places in the oblast continues. The local authorities, together with volunteers, have already evacuated 217 people, and there 68 more pending applications.

Works on restoration of buildings damaged by the occupiers continue in the Kharkiv Oblast. The repair of the Kharkiv Oblast Trauma Hospital, which was destroyed as a result of two bombings and a missile attack, has been completed by more than 55%. In total, 184 windows, ceilings and lateral reinforced concrete slabs were damaged in the hospital. In addition, all indoor premises were damaged and medical equipment was destroyed. Now specialists have replaced all the damaged support panels, completed the repair of all ceilings. The next step is to repair the windows. The works should be completed by the end of December.

Today in Kharkiv, they said goodbye to the writer Volodymyr Vakulenko, who was killed by the russian military. 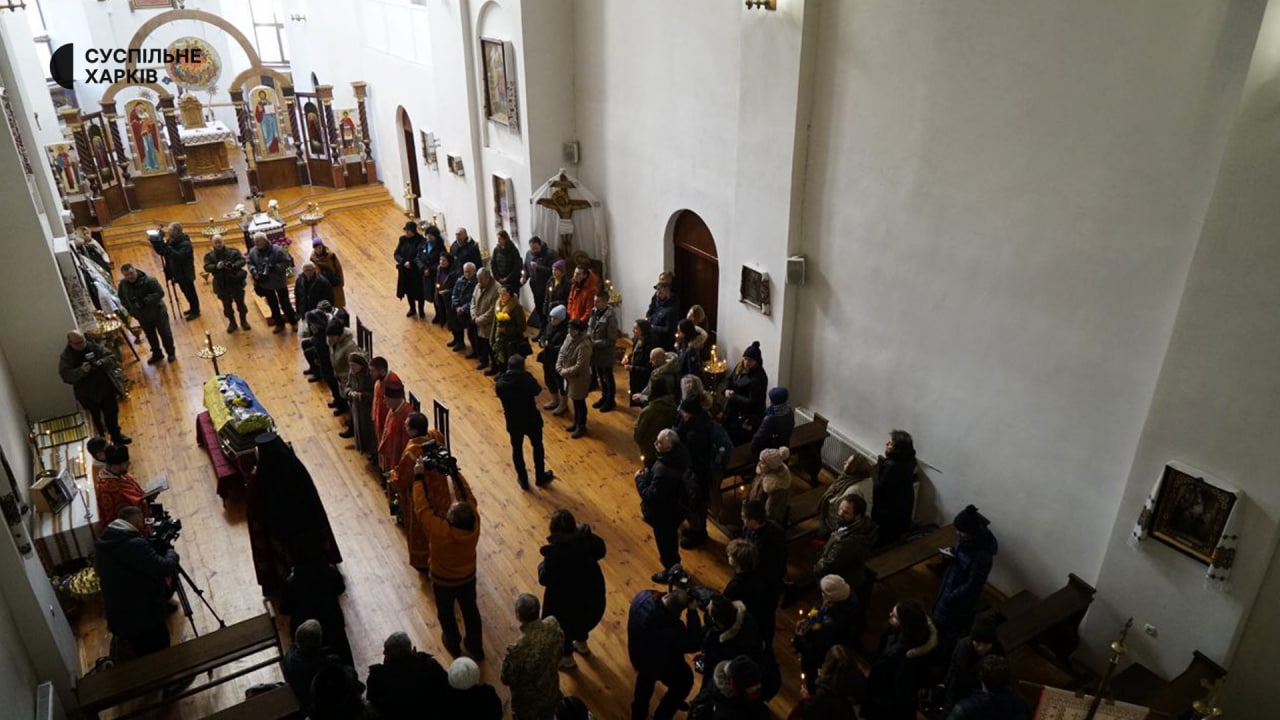 Almost 1,500 IDPs from the oblast were accommodated in 12 hostels in Kharkiv.

On December 5, the russians wounded 9 civilians in the Donetsk Oblast: 4 in Ivanivske, 3 in Bakhmut, 1 in Maksymilianivka, and 1 in Toretsk.

In total, since the beginning of the full-scale russian invasion, 1,237 civilians of the Donetsk Oblast have been killed by russian missiles, and another 2,691 have been wounded. The number of victims in Mariupol and Volnovakha is currently unknown.

On the Day of the Armed Forces of Ukraine, Volodymyr Zelenskyi presented state awards to our defenders. The awarding ceremony took place in the Donetsk Oblast.

A new batch of military stamps from Ukrposhta was cancelled today in the Donetsk Oblast. This time, the stamps are dedicated to the Armed Forces of Ukraine and are called “Weapons of Victory”.

The russian federation continues attempts to advance in the area near Avdiivka.

During the day, russian troops shelled the settlements in the east of the Pokrovsk Raion: the towns of Avdiivka, Krasnohorivka, and Kurakhove (infrastructure facilities were damaged there), as well as the villages of Karlivka and Maksymilianivka, and also damaged power lines in the Maryinka community. 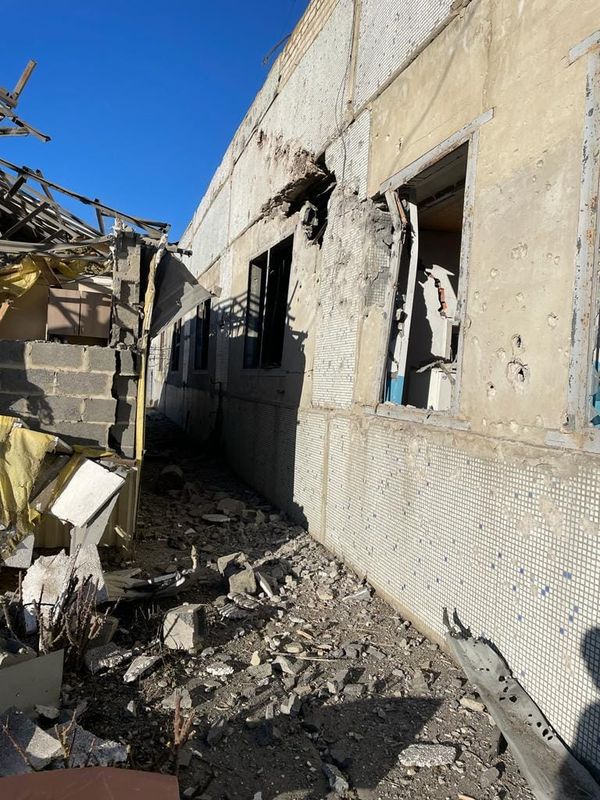 In the afternoon, the city was shaken by powerful explosions. Officially, the destruction was not reported, but on social networks, the townspeople wrote about the damage to the educational institution and industrial facilities.

About 50 hits were recorded in the Lysychansk direction in the settlements of Torske and Zarichne (Lyman community).

Due to the blackout in the northern region of the oblast, there are problems with the power supply of boiler houses. As of the evening of December 6, the boilers partially resumed operation.

On the occasion of Volunteer Day in Kramatorsk, local volunteers who have been working for the well-being of the townspeople since the first days of the full-scale war were awarded.

In the Bakhmut and Avdiivka directions, the enemy is concentrating its main efforts on conducting offensive actions, trying to improve its tactical position. 20 settlements of the Donetsk Oblast, including Bilohorivka, Soledar, Bakhmutske, Bakhmut, Klishchiivka, Bila Hora, Druzhba, Avdiivka, Pervomaiske, Nevelske, Krasnohorivka, Mariinka and Novomykhailivka, were shelled by tanks and the entire range of artillery. The enemy hit by combat aircraft the areas of the settlements of Spirne, Kamianka and Mariinka.

7 people were injured in the Horlivka direction: 4 in Ivanivske, 2 in Bakhmut and 1 in Toretsk. Private houses were damaged in Ivanivske. The amount and scope of the damage is established.

Occupiers are preparing to destroy more houses in the center of Mariupol. Residents were warned that houses on 104, 106, 108, 110, 112 Myru Avenue will be demolished.

In the Svatove and Kreminna directions, the Armed Forces of Ukraine are advancing deep into Luhansk Oblast.

Most of the bed fund of medical institutions in the fake “Luhansk people’s republic” was repurposed to provide assistance to wounded servicemen of the russian federation. Hospitals are full of russian soldiers. Because of this, planned hospitalizations and treatment of the civilian population had to be stopped. In Novopskov, a military hospital was set up even in the maternity ward.

Yesterday, the enemy directed cruise missiles of the Kh-22, Kh-555, Kh-59 type, which were fired from Tu-22m3, Tu-95ms and Su-35 aircraft, to the south of Ukraine. Surface and underwater missile carriers attacked with Kalibr-type sea-based cruise missiles from the Black Sea. Soldiers of the Air Command “South” (Armed Forces of Ukraine) shot down 15 cruise missiles, seven of them – over the Mykolayiv Oblast.

Yesterday, the enemy fired artillery at the water area of the Ochakiv community. There were no casualties.

Also yesterday, the enemy launched a rocket attack on the Olshanske community. As a result, the administrative building, residential and commercial buildings were damaged. There were no casualties.

JSC “Mykolaivoblenergo” has updated the schedules of hourly power outages in Mykolaiv and the regions of the oblast. All settlements are affected by power outages, but they will last less.

More than half a hundred soldiers were awarded in the Cherkasy Oblast on the occasion of the 31st anniversary of the National Armed Forces of Ukraine.

The Cherkasy sculptor, graphic artist Dmytro Burian organized a mini-exhibition in the dugout on the front line. The exhibition is dedicated to the Day of the Armed Forces of Ukraine. The portraits depict men. All of them are Heroes who defended their country. There are also portraits of those who are no longer among the living. They died in battles with the russian invaders. 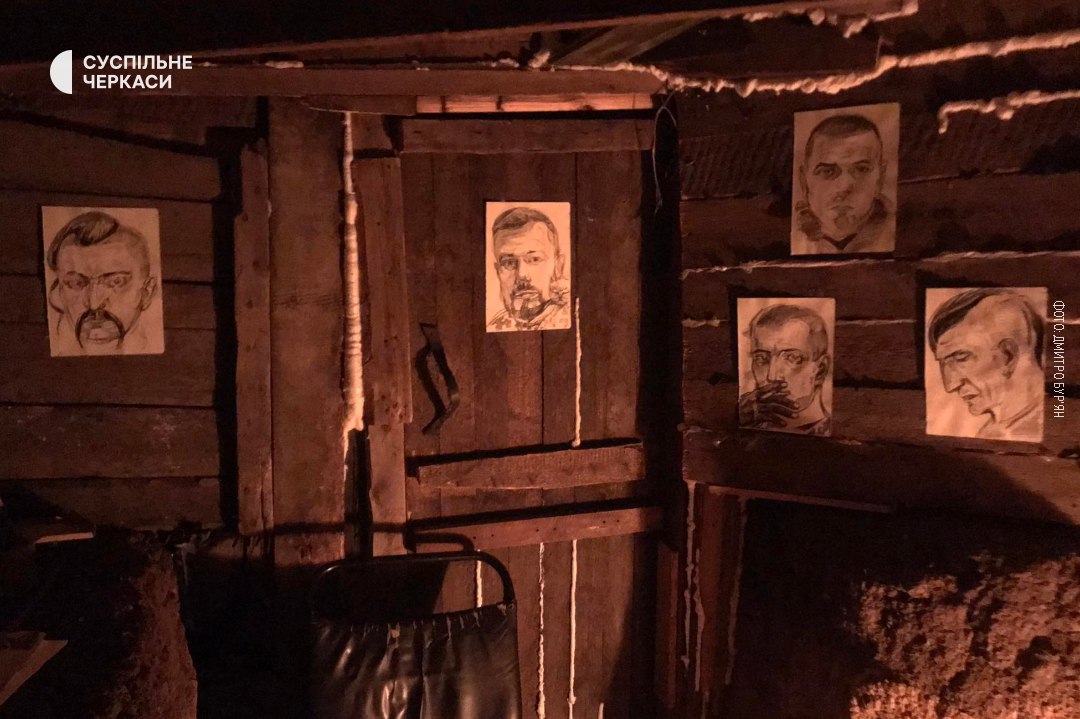 5,280 sets were handed over to displaced children of the Rivne Oblast by the UNICEF International Charity Fund in cooperation with the Ministry of Reintegration of the Temporarily Occupied Territories. In particular, the Varash Raion has already received four hundred sets, the Dubno Raion has already got almost six hundred and Rivne has 1,607 sets. Each children’s set includes a jacket, sweater or sweatshirt, thermal underwear, pants, socks, boots, hat, scarf and gloves.

In Rivne, immigrant children together with their relatives and local residents made a dream candle. Such a master class was arranged for them by representatives of the NGO “Creative Center” and the NGO “Bearers of Peace”. The participants of the master class were children from Avdiivka, Kostiantynivka, Sloviansk, Izium, the Kyiv Oblast. There were also residents of Rivne. In addition, the participants of the master class made candles for the Ukrainian military and recorded a video greeting for them.

In Chernivtsi, on the occasion of the Day of the Armed Forces of Ukraine, the mayor presented awards to the relatives of the fallen soldiers. In particular, 26 soldiers were awarded the medal “To the glory of Chernivtsi” posthumously. Mothers, fathers, wives, children of the dead soldiers came to receive it.

“Art-Oborona” (“Art-Defence”). Under this name a charity exhibition and sale of paintings was opened in Chernivtsi. As part of the “Angels of Light” project, more than a hundred paintings by Ukrainian artists have been displayed for sale. The organizers dedicated it to the artists who gave their lives for their native land. The goal is to raise money for two crossovers for the 80th and 10th brigades.Photo