Operational information from the regions of the Active Community network 13.12.2022

The two hundred and ninety-fourth day (294) day of the heroic resistance of the Ukrainian people to a russian military large-scale invasion continues.

The two hundred and ninety-fourth day (294) day of the heroic resistance of the Ukrainian people to a russian military large-scale invasion continues. 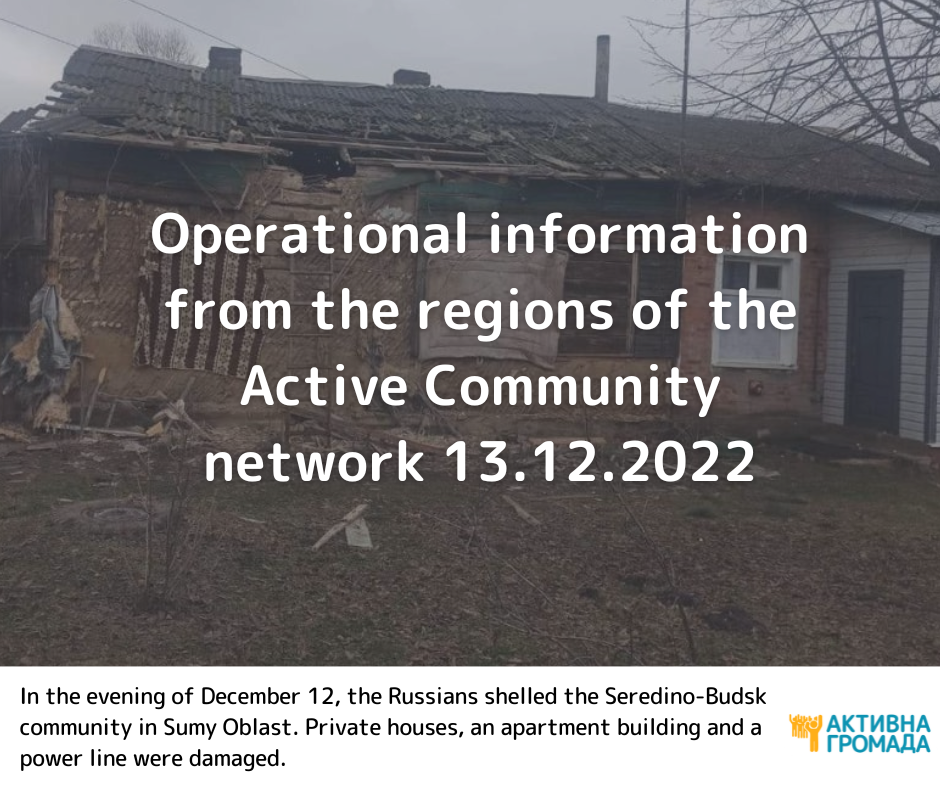 The situation with electricity supply in Kyiv is improving, but restrictions account for more than a third of consumption. 40% of electricity goes to critical infrastructure, said Yasno director Serhii Kovalenko. At the same time, electricity supply is gradually increasing, and there should be fewer hours with possible outages.

In Kyiv, electrical substations are being fortified in case of enemy shelling. Now energy engineers are trying to make additional concrete structures for protection, stronger than the blocks.

The mayor of Kyiv, Vitalii Klitschko, showed the restored houses in Obolon and Solomyanskyi districts.

More than 550 high-rise buildings were restored in the Kyiv Oblast at the expense of the state and local budgets, as well as other sources of financing. Currently, more than 250 buildings are in the process of restoration.

A soldier from Zhytomyr Oblast, commander of the 72nd separate mechanized brigade battalion, Major Andrii Verkhoglyad, was posthumously awarded the title of Hero of Ukraine.

A shower on wheels for infantry soldiers and an SUV for special forces were purchased by volunteers from the Zhytomyr Oblast. Money was collected for more than a month. For another week, the volunteers were looking in Germany for exactly such a car, which was ordered by the military from the Ivan Bohun Brigade.

More than 250 potato dumplings were made by children and employees of one of Zhytomyr’s kindergartens for wounded servicemen. The action “Dumplings for the Unbreakable” on the Day of Andrew the First-Called was held in four kindergartens in Zhytomyr.

The number of victims of war crimes committed by russians in the village of Yahidne has increased to 352. During the interrogations and investigative actions, the law enforcement officers identified five more victims. This number is not final yet , because the pre-trial investigation is ongoing.

Today, near the village of Shestovytsa, explosive devices were defused.

In the evening, the russians fired again at the Seredyno-Buda community. An apartment building and a power line were damaged. 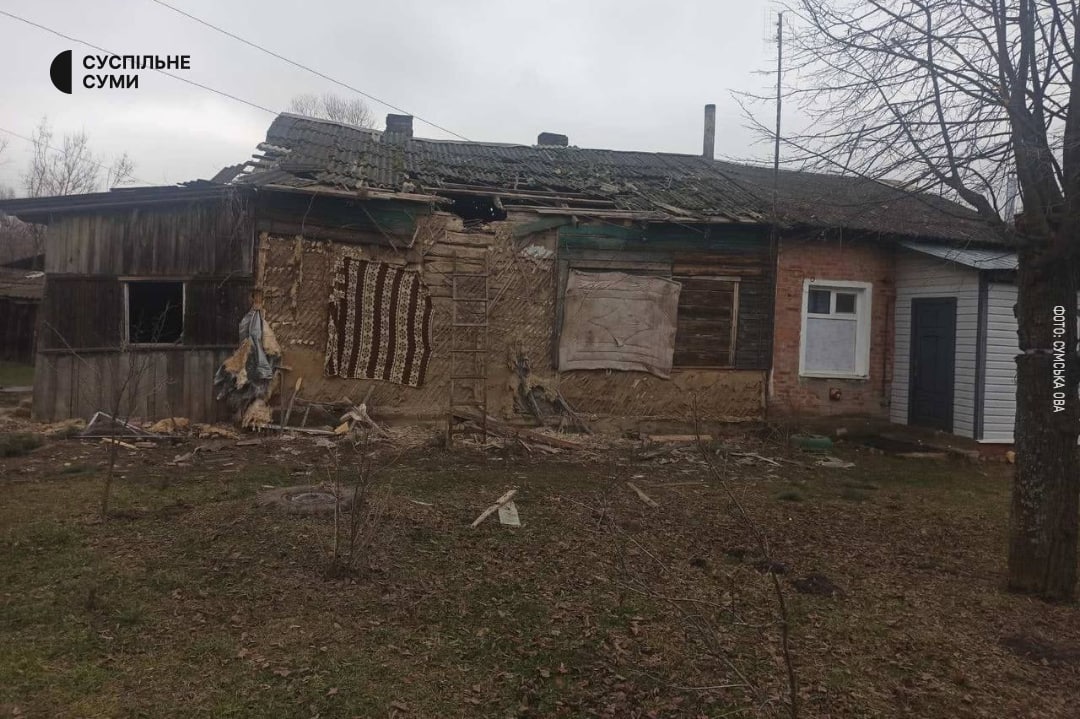 The occupiers continue to shell the border settlements of the oblast. Last day, Kharkiv, Chuhuiv, Izium and Kupiansk raions were hit by mortar and artillery fire.

In the Kupiansk direction, the enemy fired tanks and the entire spectrum of artillery in the area of Kyslivka, Kotlyarivka, Tabaivka and Berestove. According to preliminary information, there were no casualties or injuries.

At night, the occupiers launched a missile strike with the S-300 system on the city of Kupiansk. The rocket hit the two-story administrative building, causing a fire on an area of 400 square meters. The building is completely destroyed. There were no casualties.

In the Lyman direction, the enemy fired tanks, mortars, tube and rocket artillery at the settlementes of Terny, Yampolivka and Torske (Donetsk Oblast).

During December 12, the russians killed 3 civilians of Donetsk Oblast: 2 in Hirnyk and 1 in Chasovyi Yar. Another 16 people in the oblast were injured.

In the Donetsk direction, the Kurakhove community was the most affected in the previous day. In Hirnyk, 2 people were killed, 12 were injured, 9 high-rise buildings and a farm building were damaged. In Kurakhivka, the premises of the enterprise were damaged. Periodic shelling of Mariinka and Georgiivka was also recorded. There were no casualties.

In the Lysychansk direction, about 40 hits were recorded in Torske and Zarichne of the Lyman community.

Kramatorsk again suffered an enemy strike. Russians hit the industrial zone and the building of the Institute of Technology and Management. There is no information about casualties, but the exact consequences are yet to be established. The educational buildings of the Donbas State Machine Building Academy were also damaged.

This is the second time these higher educational institutions have suffered from russian aggression. The residential buildings located nearby, a bus station building and a supermarket were also damaged.

In Horlivka directon, russians were actively shooting at Bakhmut: a residential building and the Center for Youth were damaged, the building of the college completely burned down. Sporadic shelling took place on the outskirts of the Toretsk and Soledar communities.

Vuhledar came under fire in Volnovakha direction – 4 houses were damaged, there were no casualties.

In Luhansk a local maternity hospital is used for treatment of wounded russians. There are too many wounded invaders.

Severodonetsk remains without heat, only some apartments are connected to electricity.

The Russian shells hit a school, a stadium, medical institutions, power lines, an infrastructure facility and private and apartment buildings.

The Russian invaders withdrew their troops from Novomykolaivka and Mykhailivka in the temporarily occupied Skadovsk raion of Kherson region.

The building of the Center for reintegration of homeless and released persons “Nadiya” in Kherson was damaged due to shelling by the russian troops. A woman who passed by died on the spot, the Center reported.

The Russian troops shelled Tavriisky district in Kherson, the cars in the parking lot and a gas pipeline are damaged. According to preliminary data, one person was killed and three wounded.

In the de-occupied territory of Kherson oblast, “Points of Unbreakability” were opened in each police department, which receive visitors around the clock.

1320 food parcels, more than 2000 hygiene kits and 1276 stoves from the Red Cross were delivered to Kherson oblast.

The car of collaborator Buliuk exploded in the temporarily occupied Skadovsk. He was taken to Simferopol hospital with injuries, the driver died on the spot.

Yesterday the enemy struck at the water area and locality of the Ochakiv community. As a result, one person was wounded. The residential buildings were damaged and destroyed.

Also, yesterday at 4.30 pm a locality of the Kutsurub community came under enemy fire. As a result, an infrastructure facility was damaged. There were no casualties.

In Mykolaiv, Pervomaisk, Voznesensk and Bashtanka raions the day and night were relatively calm.

International organizations are helping to set up a dormitory for displaced people.

Housing for displaced persons is being organized in the Znamyanka community. Currently, the rest room, the children’s playroom, and the furnishing of the home with household appliances and furniture are in progress.

Volodymyr Makogon and Maksym Fedorov from Poltava Oblast died in the russian-ukrainian war.

Deputies talked with the military about the secrecy of the equipment purchased under the «Poltava Resistance» program. The soldiers were told why they refuse to blindly vote for the allocation of funds within the program.

In the Poltava community, proposals for renaming the streets of the second stage have been accepted. You can submit your own proposals from December 12 to December 26, inclusive, by filling out a Google form.

Poltava Oblast returned to the +4/-2 blackout schedule. This was done because, for the third day in a row, the Oblast has received higher daily electricity consumption limits from Ukrenergo – up to 470 MW. Therefore, most residents of the Oblast are provided with electricity according to the schedule of hourly outages.

Rivne Oblast received another aid from Poland, Italy and France. The Varkovychi community received four generators from the Mokoboda commune of the Republic of Poland. Another charitable aid arrived in Dubno from Italy from the Association of Ukrainians in Verona “Malve di Ucraina”. Rivne received a 100 kW diesel generator from the French charity Protection Civile.

The volunteer headquarters of the Mizoch settlement council prepares home-made delicacies – dumplings, for Bakhmut. They also baked a cake, wove a net, and made a small oven-stove.

Ukrenergo has increased the regulatory limit for the use of electricity for the Khmelnytskyi Oblast. The situation has improved significantly. The lights are turned off one at a time for 4 hours.

At the meeting of the Advisory Council on the Protection of Cultural Heritage of the Khmelnytskyi Oblast, the city council’s proposal was supported and a decision was made to dismantle the symbols and the inscription on the monument «Fighters for Soviet power in honor of the 50th anniversary of October».

Construction of a modular town is underway in Chernivtsi, which is designed for 80 families: almost 400 immigrants will live here.

Employees of the municipal utility company «Chernivtsiteplokomunenergo» make boilers using the company’s old pipes. They are handed over to points of invincibility, heating and to the military at the front.

«Ridni barvy [Native Colors] 4.5.0». Artur Novikov’s personal exhibition with this name has opened in the Chernivtsi Oblast Art Museum. 4.5.0 – this abbreviation of numbers in military slang means «everything is calm». The artist is from Kramatorsk. Currently, he defends the Motherland from the enemy in the ranks of the Armed Forces of Ukraine. Peacetime painting and collages from works from the war – this is the content of the exhibition.