Operational information from the regions of the Active Community network 16 October, 2022

The high-rise building on Lobanovskyi Street, which was shelled by the russians on February 26, is being rebuilt in Kyiv. 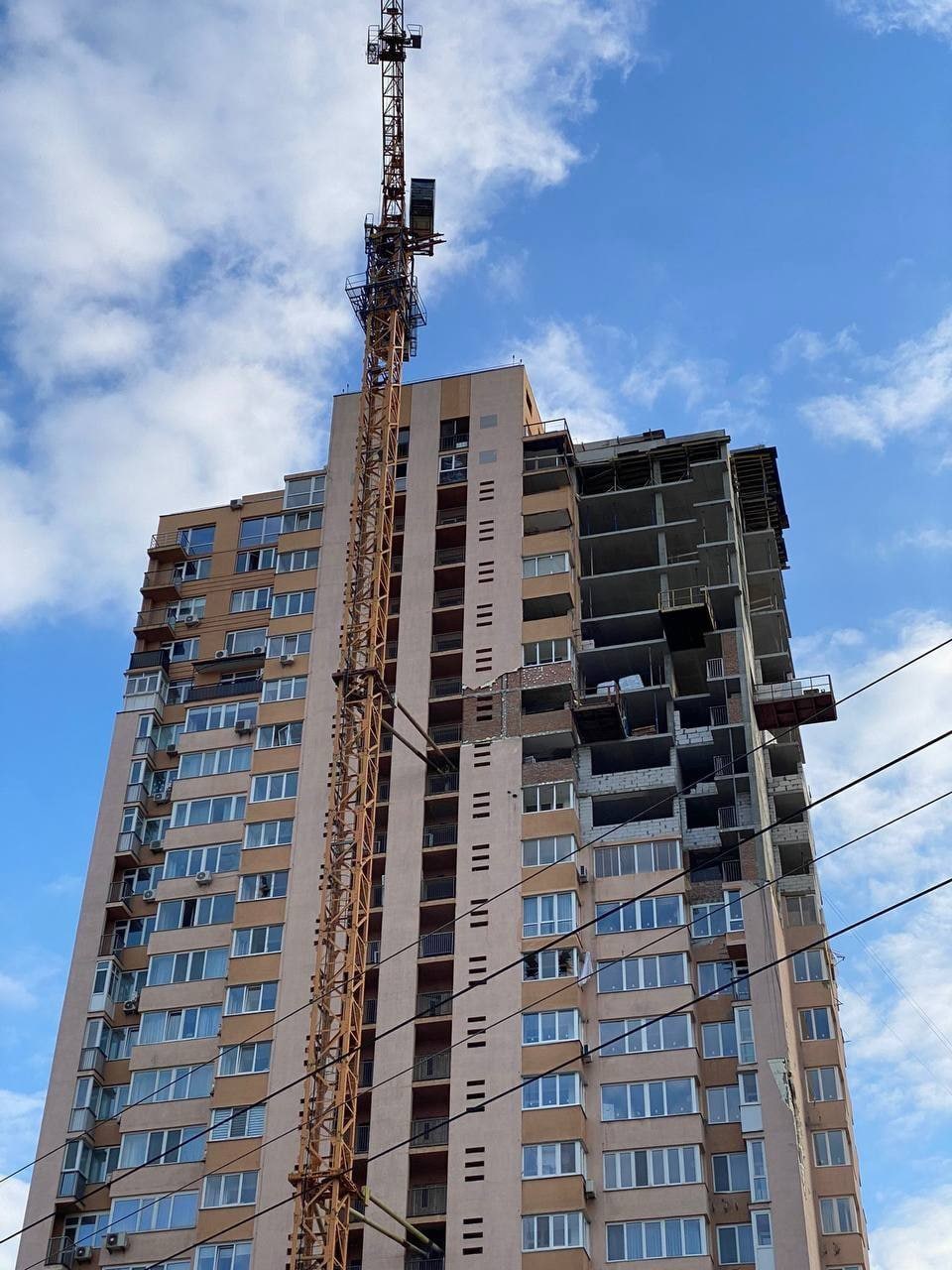 In Irpin, the dismantling of the house 12-14-16 on Hostomel highway has already been completed. 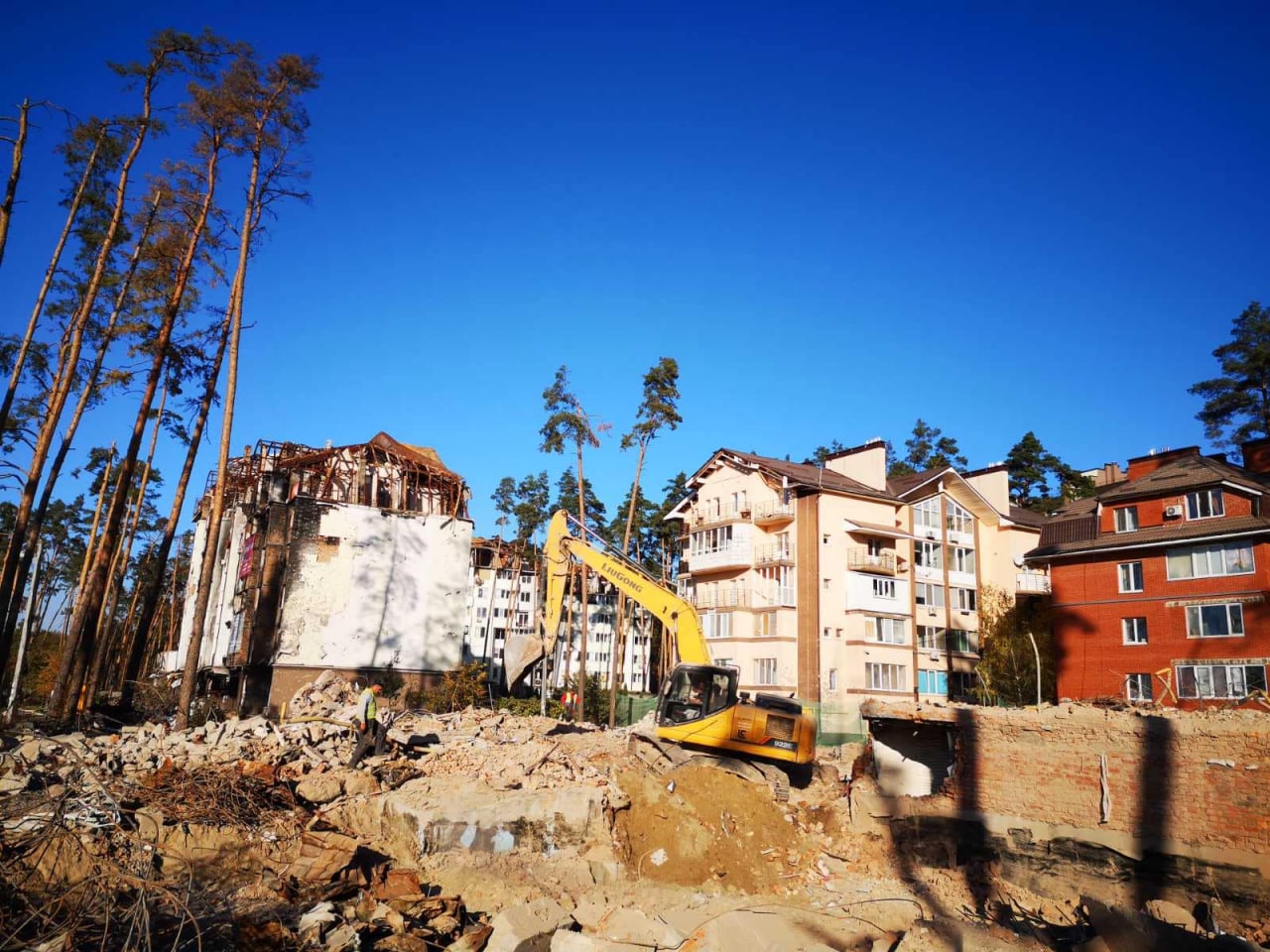 The story of a serviceman with the call sign “Champion”, who participated in the liberation of Irpin and Bucha from the invaders, was presented at the passenger railway station of Bila Tserkva.

An exposition of stylized weapons dedicated to the Day of Defenders of Ukraine was created in Pushcha-Vodytsia. 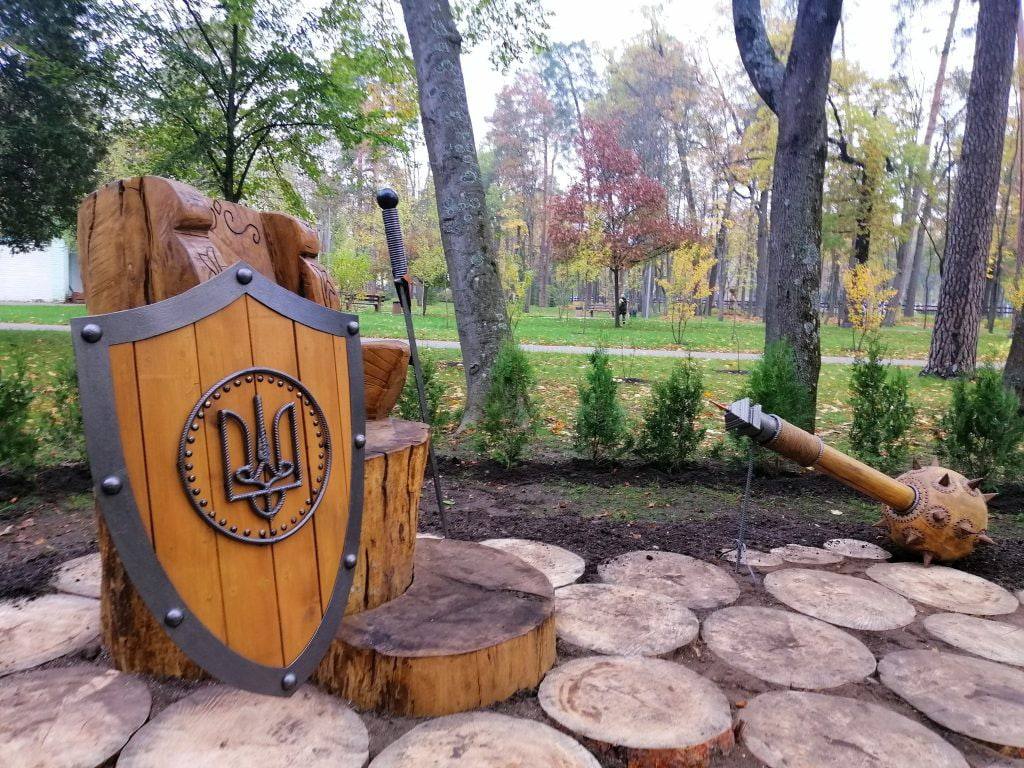 Borys Kharchuk, a paratrooper of the 95th Zhytomyr Brigade, was awarded the title of Hero of Ukraine, and the 95th Brigade was presented with the ribbon “For Courage and Bravery” to the Battle Flag. 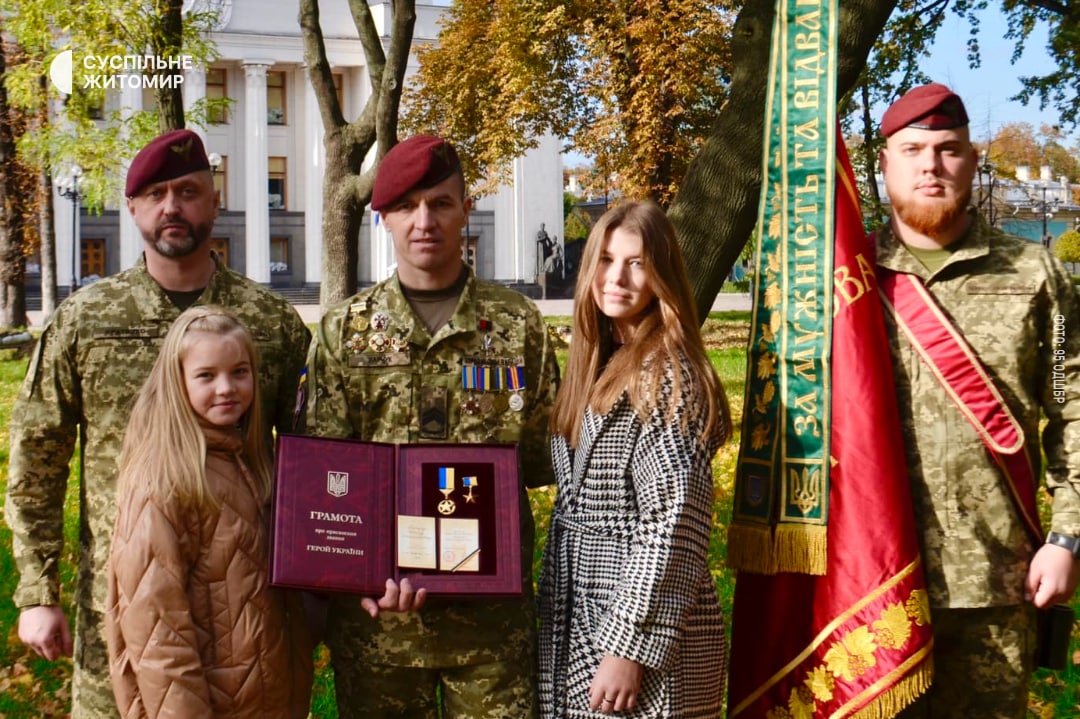 In Radomyshl, Zhytomyr Oblast, the Alley of Glory was opened with portraits of 25 their fellow countrymen who died for the independence of Ukraine during eight years of war.

For the Day of Defenders of Ukraine, Yuriy Milovanov created a new running route through Zhytomyr in the form of the “Armed Forces of Ukraine” pattern. The 17-kilometer route added to the Zhytomyr resident’s collection of running patterns.

The photo exhibition “Metaphor of War ” by Maria Volkova opened in the Kmytiv Museum of Fine Arts named after I. Bukhanchuk as part of the “Basement” project. The photos capture the states, feelings, and, most importantly, the horrors of the ruined life of modern cities such as Kharkiv, Bucha, Borodianka, Horenka, Irpin, and Hostomel. The photos are black and white. Yesterday, the russians shelled the Horodnia and Semenivka communities. In the first half of the day, the russians twice fired mortars and tube artillery at the territory of the Horodnia community. 16 explosions were recorded. After 2 p.m., the enemy fired mortars at the border area of the Semenivka community. Eleven 120 mm mortar shells hit the Ukrainian territory.

Yesterday, the russians shelled seven communities in the Sumy Oblast. A total of 104 explosions were recorded.

The russians shelled the communities of Bilopillia, Rychkivka, and Mykolaiivka around 8 a.m., almost 30 explosions were recorded in total. They were fired from a mortar.

Around 10 in the morning, the Shalyhyne community came under enemy mortar shelling.

Around noon, the russians fired six rockets from a russian Mi-8 helicopter at Velykopysarivka community.

At the same time, explosives were dropped from a drone on one of the villages of the Krasnopillia community. And at 4:00 p.m., mortar shelling from artillery and mortars began.

After 1:00 p.m., the russians shelled the Esman community with a mortar.

Yesterday, the enemy shelled settlements near the demarcation line and the border with the russian federation in the Chuhuiv, Kharkiv, Izium and Kupiansk raions. Three people were hospitalized with injuries in the Kupiansk Raion: 2 men aged 36 and 48 and a 69-year-old woman.

The scientists reached the Radio Astronomy Observatory named after S. Braude in the de-occupied village of Volokhiv Yar near Chuhuiv. The premises of the observatory suffered significant damage, the occupiers removed and destroyed the equipment.

Demining and restoration of critical infrastructure continues in the oblast. During the day, the pyrotechnic units of the State Emergency Service defused 555 explosive objects.

Occupied Donetsk came under fire on October 16. The explosions and fire near the “city administration building” happened in the morning. The occupying authorities of Donetsk accuse the Ukrainian military of shelling.

In the Kramatorsk direction, russian troops fired from tanks and artillery of various calibers along the entire contact line in the direction of such settlements as Bilohorivka, Charivne, Mala Tokmachka, Novoyehorivka, Rozdolivka, and Serebrianka.

The bodies of six more civilians who died during the occupation of the city by russian occupiers were discovered in Lyman.

An evacuation flight was sent from Sloviansk to Nice. 48 residents of the city can spend the winter in this city. People are provided with accommodation and food, and will receive all the necessary assistance. This became possible thanks to cooperation with charity organization “Save Life”.

The team of the AUI “Active Community” held an art therapy event “We meet autumn” for young residents of Kramatorsk. Together with the coordinators, the participants, with the help of their parents, made pumpkin crafts. Children were also entertained with exercise and games.

The russian army struck the city of Avdiivka, the villages of Karlivka, Orlivka in the east of the Pokrovsk Raion.

The Armed Forces repulsed enemy attacks in the Avdiivka direction.

Over the past day, the enemy has been shelling the Bakhmut and Avdiivka areas from tanks, mortars, barrel and rocket artillery along the demarcation line.

On October 15, a person died in Bakhmut. Three more people in the Donetsk Oblast were injured: two residents of Orlivka and one of Bakhmut.

In Mariupol, the queue for free bread consists of hundreds of people. In principle, the nearest point where you can buy bread is almost three kilometers away, so people line up and wait for hours.

More than 11,200 houses, 479 industrial enterprises, 167 educational institutions and 64 hospitals were damaged or completely destroyed by russia in the Luhansk Oblast.

The occupiers undermine access roads towards Svatovo and Kreminna, some bridges have already been blown up to delay the offensive of the Armed Forces. They charge a large number of personnel and equipment to these areas.

In Rubizhne the occupiers evict the local population from their settlements and station their military there.

On October 15, after ten o’clock in the evening, the russian military once again shelled the village of Komyshuvakha. In the center of the settlement, houses on two streets were damaged. There are no dead or injured. 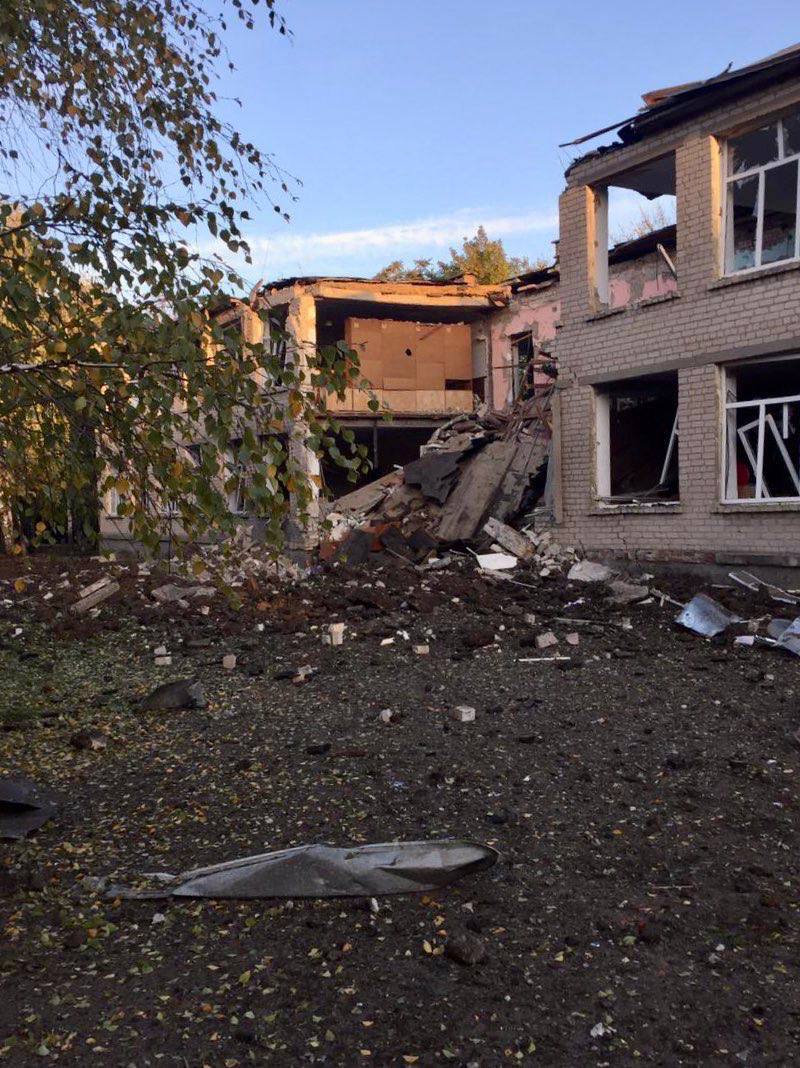 During the past day in Zaporizhzhia, the Defense Forces inflicted fire damage on the occupiers in Marfopil, Tokmak, Pology and Kamianka-Dniprovska. As a result of pinpoint strikes by Ukrainian artillery, ammunition depots were destroyed and more than 100 russian servicemen were injured.

In the direction of the Southern Bug river, the russian military shelled more than 25 settlements along the dividing line – in particular, Biloghirka (Kherson Oblast).

Also, the Ukrainian military launched about 160 fire strikes against the positions of the russian army and the areas where the enemy’s manpower and equipment were concentrated. Two ammunition depots were destroyed in the Beryslav Raion.

On October 16, Pavlo Abramovych from Kakhovka, and Serhiy Shylov from Gornostaivka returned. The men were kidnapped and illegally detained by the russian military. Both are now in a safe place.

The enemy attacked the Mykolaiv Oblast from the coastal missile complex “Bastion” with one cruise missile of the “Onyx” type from the temporarily occupied Crimea.

Yesterday, the enemy fired a 120-caliber mortar at the water territory of the Ochakiv community. There were no casualties.

Also, one person was injured yesterday during enemy shelling of the Voskresenske community. A residential house and the administrative building of the railway station were damaged.

Yesterday, shelling was heard in the vicinity of the Ingulka community. There were no injuries or damage.

Yesterday, the Shyroke community came under enemy fire. As a result, significant damage was recorded to three buildings, outbuildings and garages. There were also hits on open areas and roads.

The villages of the Berezneguvatу community located on the dividing line remain under constant fire from the russians. Yesterday, the enemy shelled the outskirts of one of the settlements. Also, in another settlement, a fire broke out in an economic building as a result of artillery shelling.

That night, the Nikopol and Marganets communities came under the attack of multiple launcher rocket systems “Grad” and heavy artillery. A man was injured. In Nikopol, almost 30 high-rise buildings and private houses, 13 commercial buildings, an industrial enterprise, 8 cars, gas pipelines and the electricity network were damaged. More than 1,500 families were left without electricity. 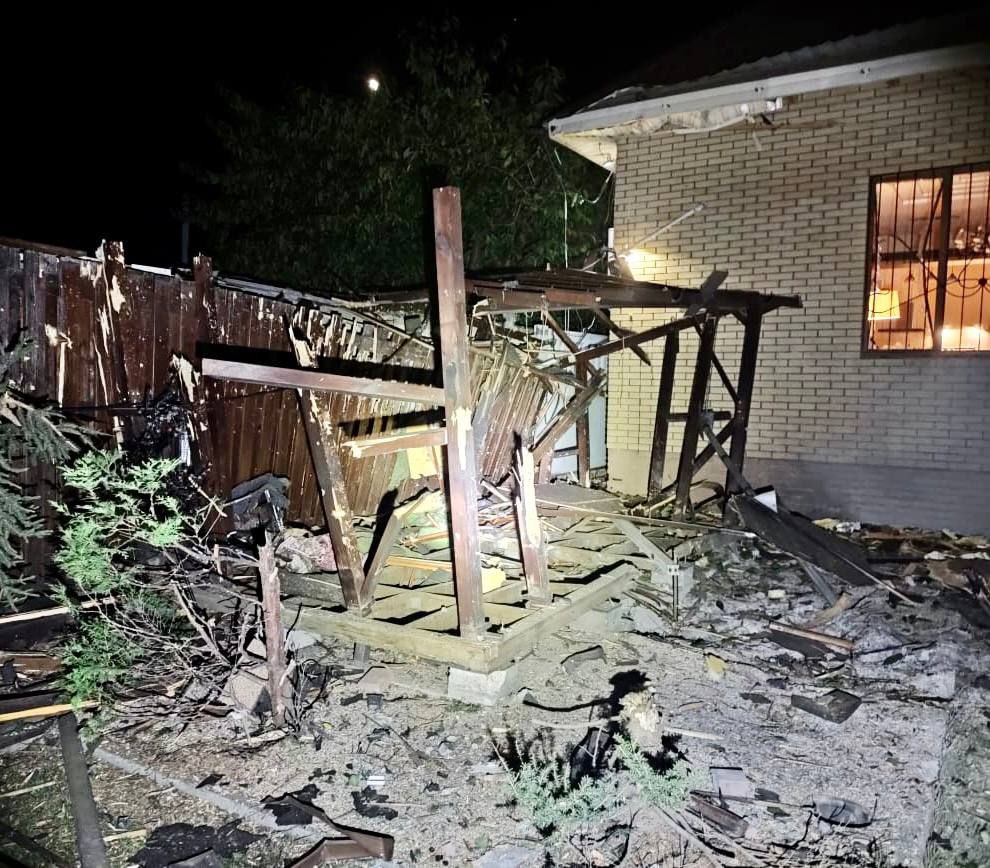 In Dnipro, at the “Sicheslavska Pokrova” festival, funds are being collected for an armored personnel carrier for the military unit of the Ukrainian army. The action take place in the open air. Handicrafts and goodies are sold, a charity auction is held, Cossack entertainment and a concert are organized.

For a month, 10-year-old volunteer Yulia Doroshenko from Dnipro sold souvenirs on the street that she made herself: hairpins, bracelets, magnets and clay figurines. The girl collected money to help the air command “East”. In total, the girl collected more than 6,500 hryvnias. This money was used to buy auto parts. The salesman, when he heard this story, made a 20% discount on auto parts.

The Dnipro educational and production enterprise of the Ukrainian Society of the Blind has resumed work after a break of several months.

On October 5, while defending Ukraine, Andriy Kuyavskyi from the village of Zhuravne (Poryk headman county, Khmilnyk community), died at the front. The defender of Ukraine, born in 1973, was buried in his native village. He died during artillery shelling near the city of Orihiv (Zaporizhzhia Oblast) on October 5.

The original way to congratulate Ukrainian defenders on the holiday was invented in the village of Salnyk. There, 2,022 dumplings with potatoes were molded and handed over to the military stationed on the territory of the community. The number of dumplings is symbolic – it predicts victory in 2022. 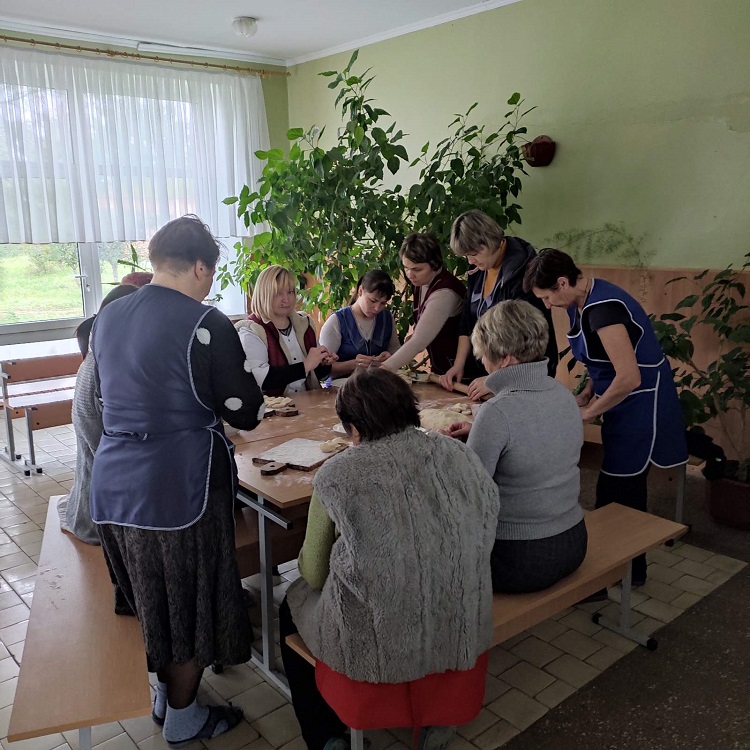 The oblast department of education allowed principals to independently determine the format of school work from October 17, taking into account the security situation in the region. This applies not only to general secondary education institutions, but also preschool, vocational and higher education. Each educational institution must notify its students or their parents about the decision.

In the Khmelnytskyi Museum-Studio of Photographic Arts, an informational and educational exhibition “UPA (Ukrainian Insurgent Army) – the answer of the unconquered people” was opened. The presented works tell about the heroic page of the national liberation struggle of the Ukrainian people.

Romania restored the section of railway tracks from the settlement of Valya-Vysheululi (Romania) to the Ukrainian border and the Berlebash station in Zakarpattya Oblast. Such works became the next step after the restoration of the 19.3 km connecting section from Rakhov city to the state border. This railway branch can help increase exports from Ukraine, improve international connections with Romania, and in the future – launch passenger trains from Ivano-Frankivsk to Uzhhorod.

In the Zakarpattya Oblast Scientific Library, a master class was held on the creation of talismanic angels for defenders. Adults and children made macrame yellow and blue angels that will be sent to the front. This is not the first time amulets for warriors have been made in the library. Various master classes are held within the framework of the TATOhub project. This hub has been operating in Uzhhorod since July. During this time, 23 events were organized there.