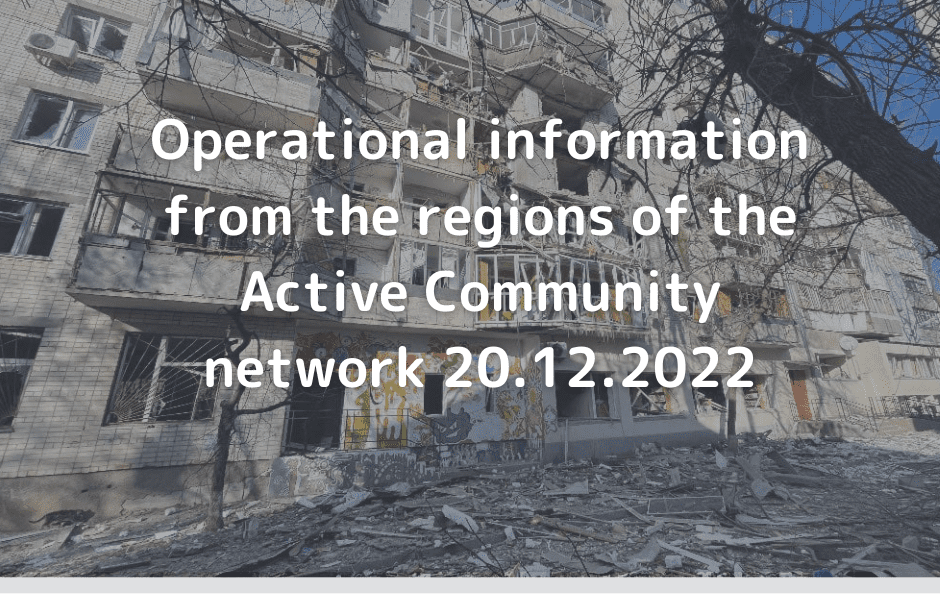 Operational information from the regions of the Active Community network 20.12.2022

The three hundred and first (301) day of heroic resistance of the Ukrainian people to the large-scale Russian military invasion continues.

The three hundred and first (301) day of heroic resistance of the Ukrainian people to the large-scale Russian military invasion continues. 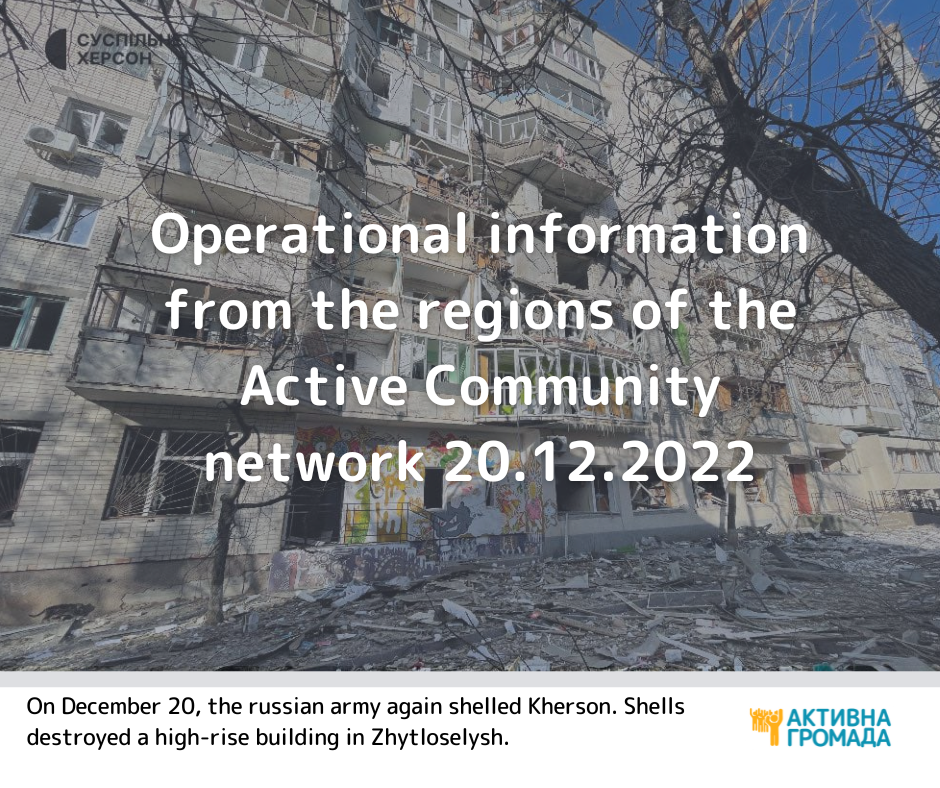 “Ukrenergo” applies more significant restrictions in Kyiv. Therefore, 10 boiler houses in the capital are currently without stable power supply. As a result, heat supply interruptions may occur in 144 residential buildings of the city. Power engineers and heat engineers work around the clock.

The level of Internet access in Kyiv has dropped by half today.

Concrete blocks at checkpoints were turned into fairy-tale characters and placed throughout Kyiv – this initiative was launched by the company “Concrete by Kovalska”. Each of them has a QR code with a link to the quest: you need to find 10 magical characters on the streets of the city to receive gifts. You can also donate to the “Children of Heroes” Fund, which provides psychological assistance to the children of parents killed in the war. 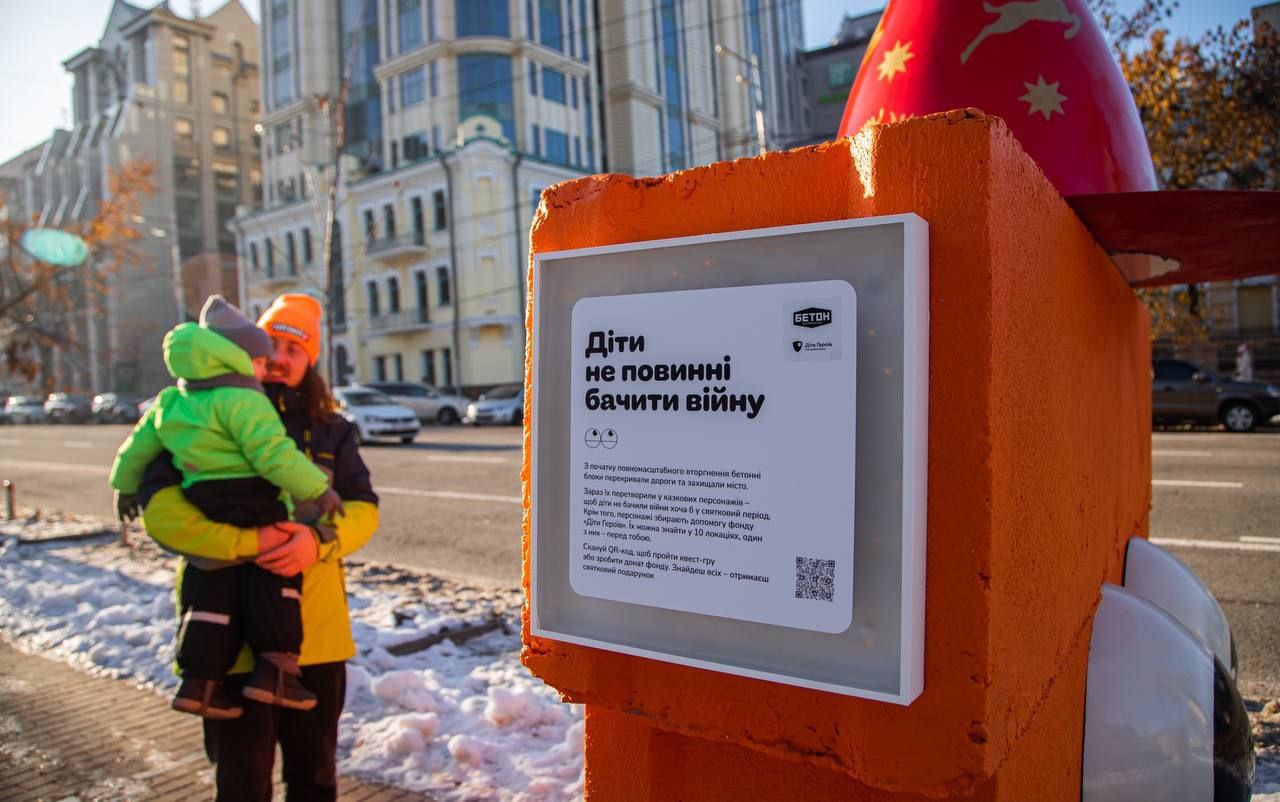 The situation with power supply in the Kyiv Oblast remains critical. After the recent drone and missile attacks by the russians, the restoration of the power supply continues. The most difficult situation is in the Bucha, Vyshhorod, Obukhiv and partially Fastiv raions. In total, there are more than 30 communities there.

In some settlements of the Kyiv Oblast there is no power supply for 13-18 and even more than 26 hours now. The situation is difficult, but power engineers are doing their best.

Ambassador Extraordinary and Plenipotentiary of the Republic of Lithuania to Ukraine, Valdemaras Sarapinas, and Commercial Attaché of the Embassy of Lithuania, Thomas Matulevičius, visited Irpin. The guests, together with the First Deputy Mayor of Irpin, Andrii Kravchuk, and the Head of the City Department of Education and Science, Oleh Bilorus, visited the kindergarten “Radist” (Joy) – one of the preschool institutions of the community most affected by the russian aggression. 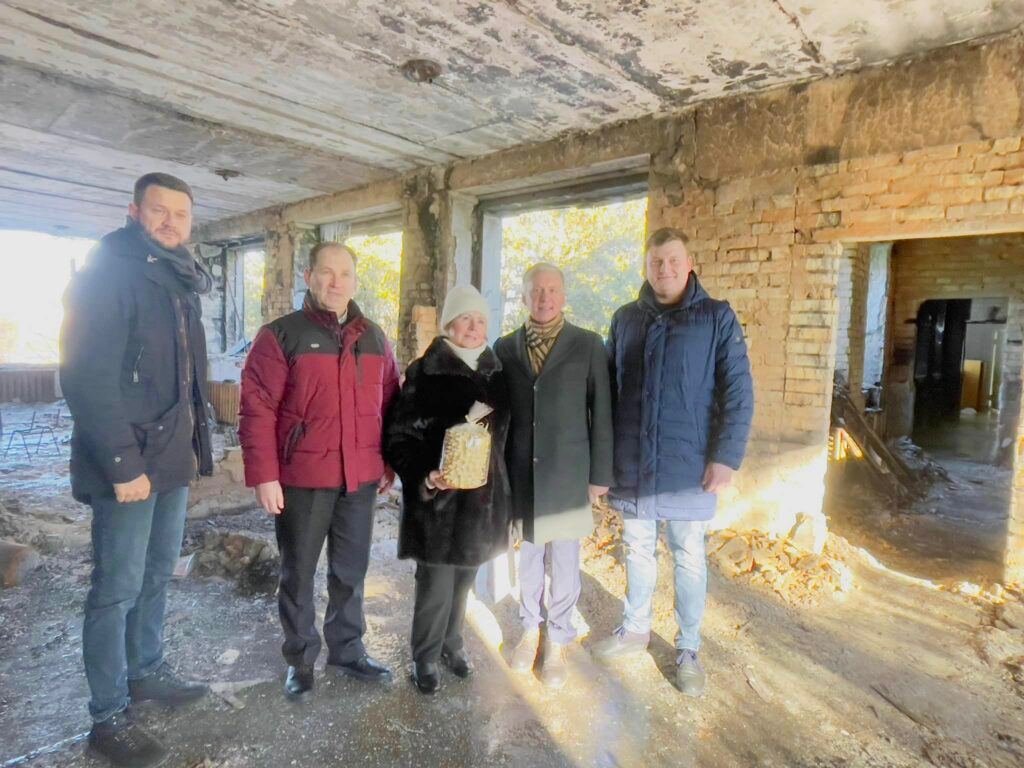 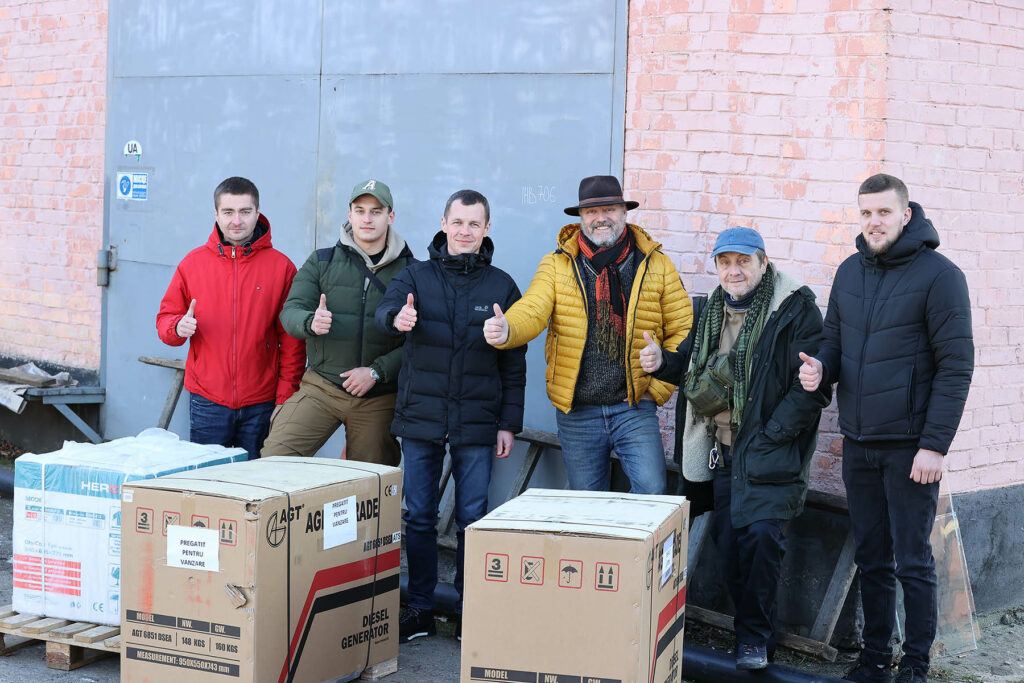 On December 20, in Zhytomyr, in the St. Michael’s Cathedral, they said goodbye to serviceman Volodymyr Andriychuk. He was a member of the Anti-Terrorist Operation (ATO), and since the beginning of the full-scale war, he went to the front to join the assault brigade of the Armed Forces of Ukraine. He was killed in action in the Kharkiv Oblast.

Three entrepreneurs from Zhytomyr sell keychains with the wreckage of the russian Su-25 aircraft – they want to transfer the money raised to buy necessary things for the 95th Detached Air Assault Brigade.

In the border areas of the Chernihiv Oblast, the Security Service of Ukraine (SBU) found hidden arsenals left behind by the russian military. Among the seized items there are dozens of boxes with artillery rockets and rounds for anti-tank weapons.

407 unemployed people joined the “Recovery Army” in the Chernihiv Oblast. Currently, the program of organizing community service works is active in 17 territorial communities of the oblast. More than two million hryvnias have already been spent on the wages of the unemployed involved in such works from the Fund of compulsory state social insurance in case of unemployment.

Yesterday, the Russians carried out 83 attacks on settlements of the Sumy Oblasts. 7 communities of the oblast came under fire.

The Velyka Pysarivka community was hit 6 times with self-propelled artillery systems from the territory of russia.

The Khotyn community was shelled twice by russian artillery. A total of 34 shells exploded in the border area.

Grenade launchers and machine guns were fired at the Shalyhyne community.

The russian military twice dropped explosive devices from drones on the territory of the Krasnopillia community and also fired from self-propelled artillery systems.

After the shelling of the Znob-Novhorodske community, the workshop of the local lyceum caught fire, also three cars, a tractor and a bus were damaged.

The enemy continues shelling the civilian population of the Kharkiv Oblast in the border settlements of the Kharkiv, Chuguiv, and Kupiansk raions. In addition, the enemy launched rocket attacks on the Izium Raion.

Vovchansk and the villages of the Vovchansk community were under occupiers intense fire. They are Starytsia, Gatyshche, Vovchanski Khutory. Previously, there were no casualties.

The occupiers carried out artillery strikes on populated areas of the Kupiansk Raion, including Kupiansk. A residential building was burning in the village of Dvorichna.

Today, around 2:00 a.m., a large-scale fire broke out at a civilian object of industrial infrastructure in the Izium Raion as a result of missile strikes by the occupiers.

On December 19, the russians killed 3 civilians of the Donetsk Oblast: two people in Bakhmut and one in Zalizne. Another five people in the oblast were injured.

In total, since February 24, russian missiles have killed 1,271 civilians in the Donetsk Oblast, and another 2,762 people have been injured. The number of victims in Mariupol and Volnovakha is currently unknown.

In the Donetsk direction, shelling of Marinka and the outskirts of the Ocheretyne and Kurakhove communities was recorded. There are no casualties.

Today, the heads of the military administration of the Pokrovsk community handed over the UAZ passenger car to the representatives of the 109th territorial defense brigade. The car is worth 210,000 hryvnias and it was purchased from the local budget. It is an off-road, roomy, 5 seats vehicle .

In the Bakhmut and Avdiivka directions, the enemy continues to conduct assaults. It fired tanks, mortars and rocket artillery at our positions in the areas of thirty settlements. In particular, these are Verkhniokamianske, Berestove, Yakovlivka, Soledar, Hryhorivka, Bakhmutske, Bakhmut, Chasiv Yar, Klishchiivka, Andriivka, Kurdiumivka, Avdiivka, Krasnohorivka, Marinka, and Novomykhailivka of the Donetsk Oblast. 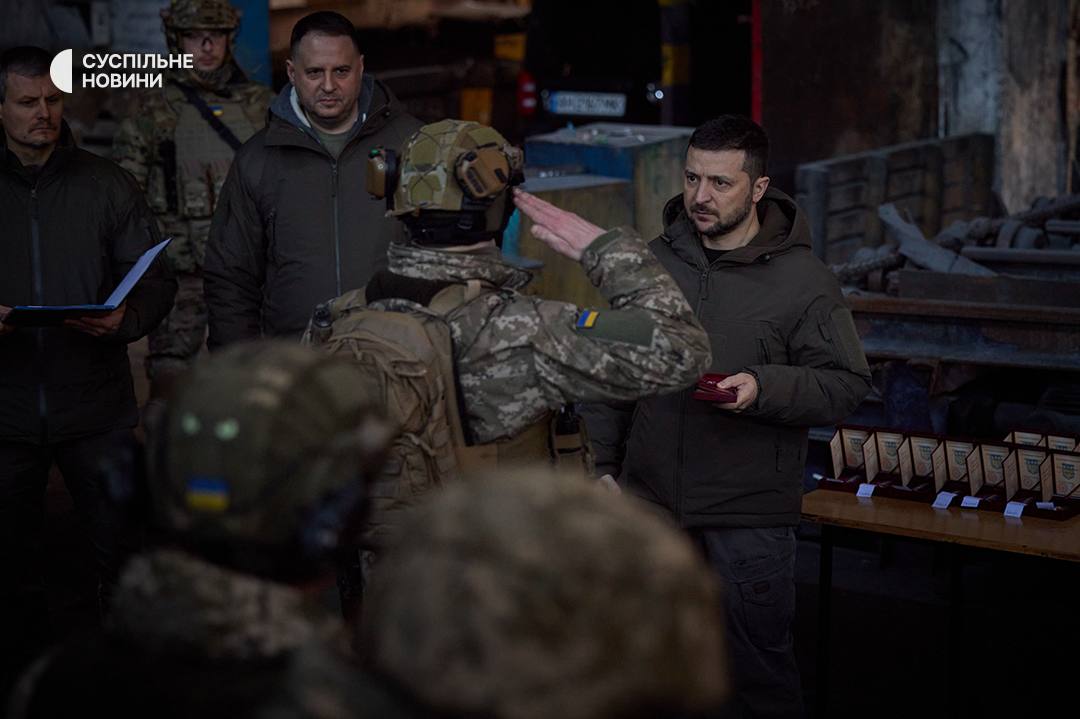 In the Volnovakha direction, Vuhledar and its outskirts are under fire. One house was damaged. Information about the victims was not received.

Residents of the building at 66 Morsky Boulevard, wrote a complaint about “repairs” by builders from the Moscow Oblast. The windows have not been replaced, and the roof continues to leak. But the occupation authorities replied that everything was done and the house is “ready”.

Residents of occupied Sieiverodonetsk report that under the guise of repair work, russians are opening their apartments – both empty and occupied.

Average consumer prices for food products in the communities of the Luhansk Oblast under occupation are significantly higher than in the territory under the control of the Government of Ukraine. 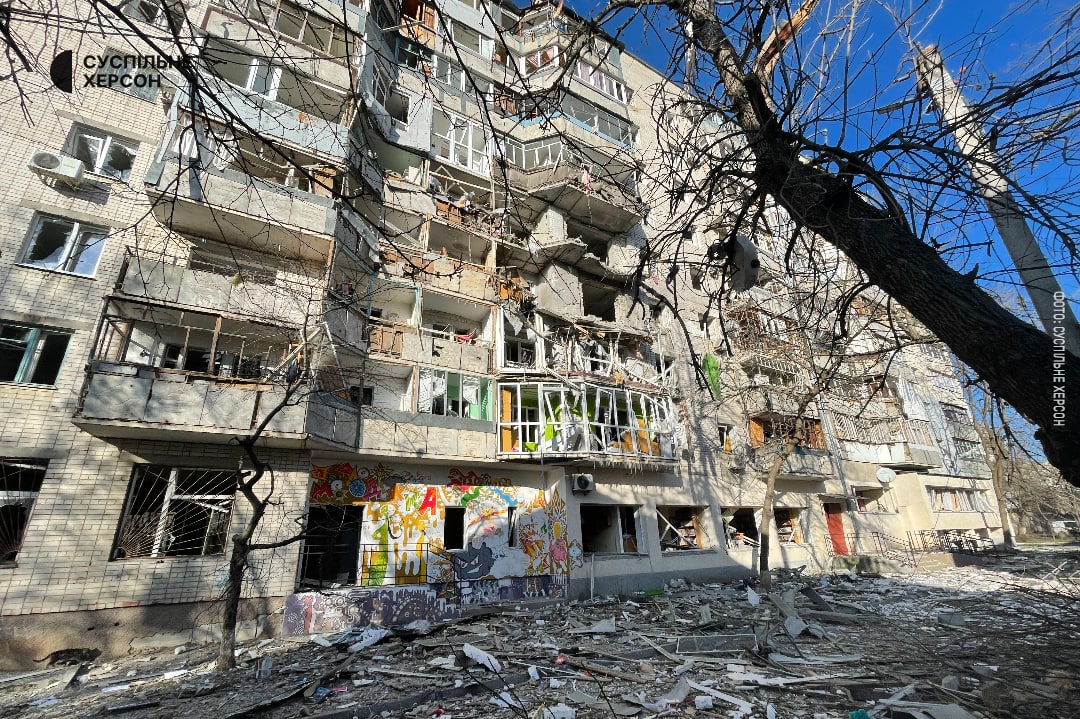 In the temporarily occupied Henichesk of the Kherson Oblast, activists of the “Yellow Ribbon” movement distribute leaflets against passporting. They remind that a russian passport is a legal reason to mobilize Ukrainians into the russian army. 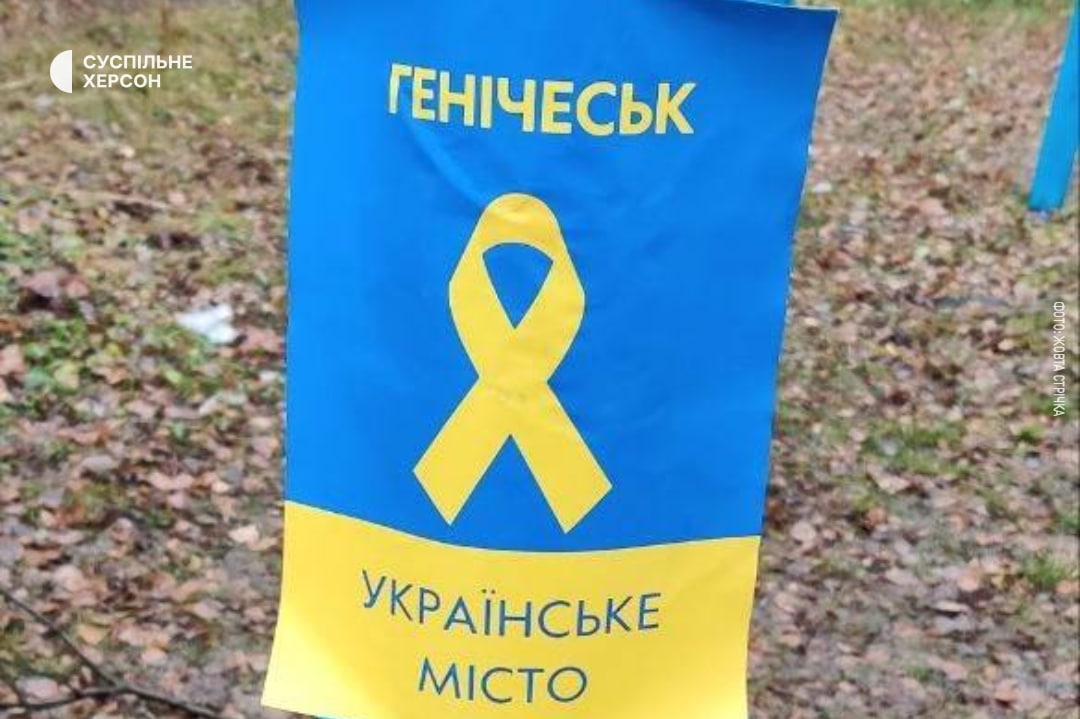 Modular platforms were delivered to Arkhangelsk and Borozenske in the Kherson Oblast, where medical workers will be based. Cabinets were received from the international organization Doctors Without Borders. 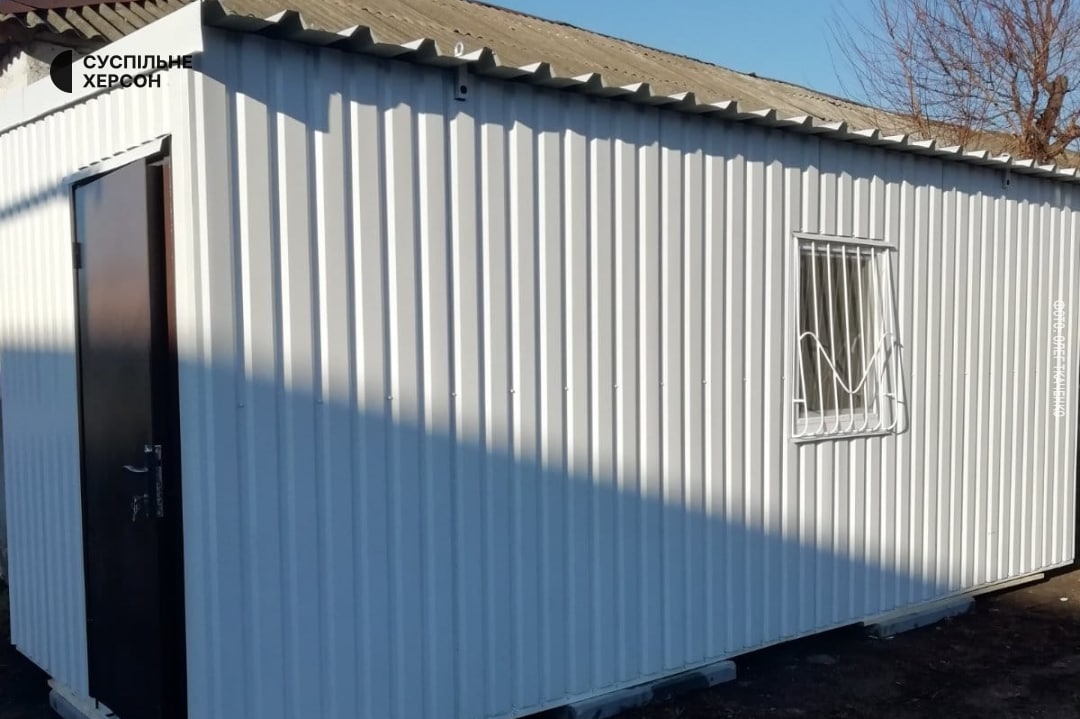 In the Kherson community, mass events on holidays were abandoned due to the danger of shelling. But they started the campaign “Chain of Goodness” so that children could receive gifts for the holidays.

Yesterday, the enemy conducted artillery fire on the water area of Ochakiv community. There were no casualties.

Also yesterday, the enemy shelled the populated areas of the Kutsurub community. There were no casualties either. The consequences and the damage are being clarified.

A delegation from Romania arrived in Odesa. The deputy mayor of Odesa met with the advisers of the mayor of Constanta, a sister city of Odesa. They discussed issues of international humanitarian aid and identified areas for further cooperation. The representatives of the Romanian delegation visited several “Points of Invincibility”, which are equipped with generators, received as part of humanitarian aid from Constanta, and the city’s humanitarian center.

An online meeting with specialists of the Israeli Coalition on work with psychological traumas was held in the Odesa City Hall. Since 2014, specialists of this organization have been working in Ukraine and have developed a number of training programs on psychological assistance to the population. Among them are doctors, psychologists, psychiatrists and social workers. The parties discussed the possibility of cooperation in the medical, security, educational and pedagogical spheres.

There are already 311 “Points of Invincibility” operating in Poltava Oblast. In them, people can warm up, recharge their gadgets, and get access to the Internet. These points also have children’s corners. In addition, a Telegram bot @nezlamnistbot was created for quick search.

The people of Poltava received a modern mobile clinic from the UN Population Fund. From now on, specialists of the oblast hospital will go out in this car to carry out examinations of the residents of the communities. The car is equipped with oxygen and a generator, so it can work in blackout conditions. There are also an ultrasound, an EKG, a colposcope and equipment for determining the level of sugar in the blood, an examination for HIV, hepatitis B and C.

The first “modular town” for internally displaced persons began to be established in Poltava. Six one-story buildings designed to house 528 people are to be placed in it. There will also be a parking lot for 76 cars, a children’s playground, places for rest and street lighting. The total cost of construction and installation works is 34 million 200 thousand hryvnias, according to documents in Prozorro [Ukrainian electronic system of public procurement].

Poltava Oblast received another batch of humanitarian aid. The International Committee of the Red Cross donated 264 folding beds and more than 2,000 pillows for internally displaced persons living in compact housing in local communities. Earlier, the ICRC handed over 1,154 folded beds with mattresses, 2,400 pillows, 490 mattresses and 4,000 towels. These are the basic necessities for people’s everyday use. Also, 200 first aid kits from UNICEF will be sent to the IDPs in the communities of Poltava Oblast.

In Cherkasy, 18 servicemen donated blood to support the All-Ukrainian campaign “Your blood can fight. Become a donor.”

Children’s winter clothes, products and diapers – such humanitarian kits were given to internally displaced persons with children in Kanev. The distribution of kits lasted for three days. During this time, more than two hundred families have applied. 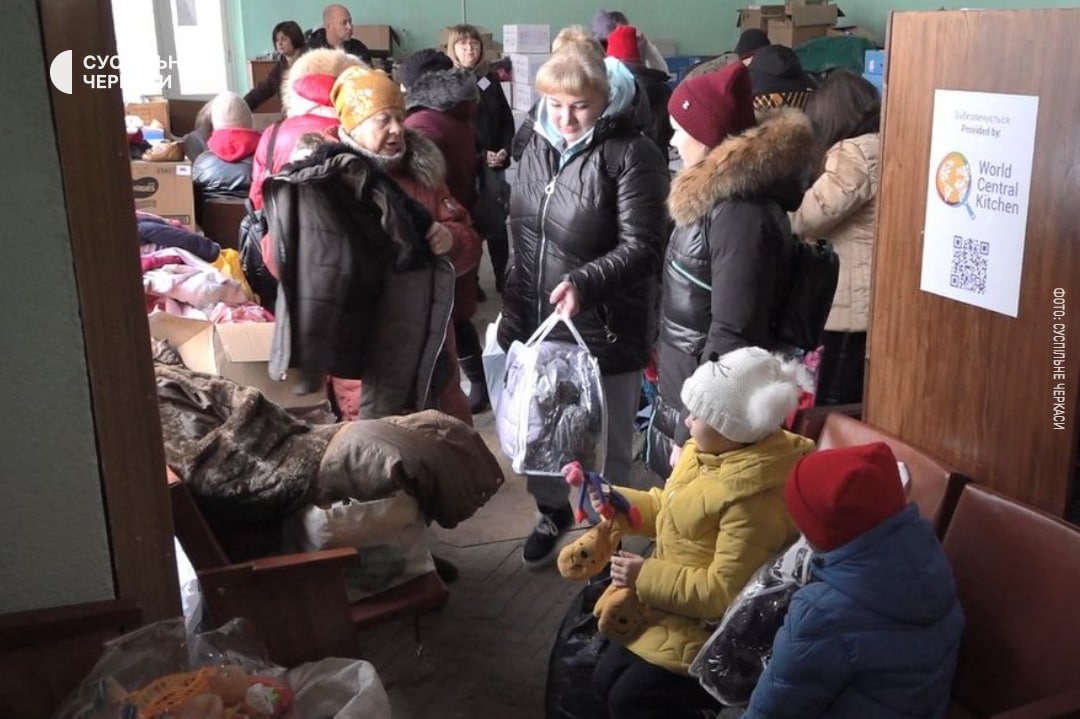 The premiere of the documentary theater “Cafe “Motivation” took place in Cherkasy. The actors are ordinary Ukrainians who told their real stories. The coordinators of the AUI “Active Community” helped them prepare the play. To date, such performances have already taken place in more than 10 Ukrainian cities. The peculiarity of the Cherkasy performance is a positive, resourceful finale that motivates and inspires.

A solemn farewell to two Heroes took place in the Rivne Oblast. Defender of Ukraine Oleksandr Golysh was buried in Mala Lyubasha community. A soldier died on December 14 near the settlement of Avdiivka (Donetsk Oblast).

In the Klevan community, people met and escorted the fallen defender of Ukraine, Oleksandr Kotyuk, through a living corridor of honor. A serviceman died on December 12 during hostilities in the settlement of Soledar (Bakhmut Raion, Donetsk Oblast).

Three thousand food kits (22.81 tons of products) were handed over by the community of Khmelnytskyi Oblast to the residents of the Kherson Oblast over the past week. Also, 10 wagons of food (226.44 tons) were sent for the needs of Luhansk Oblast.