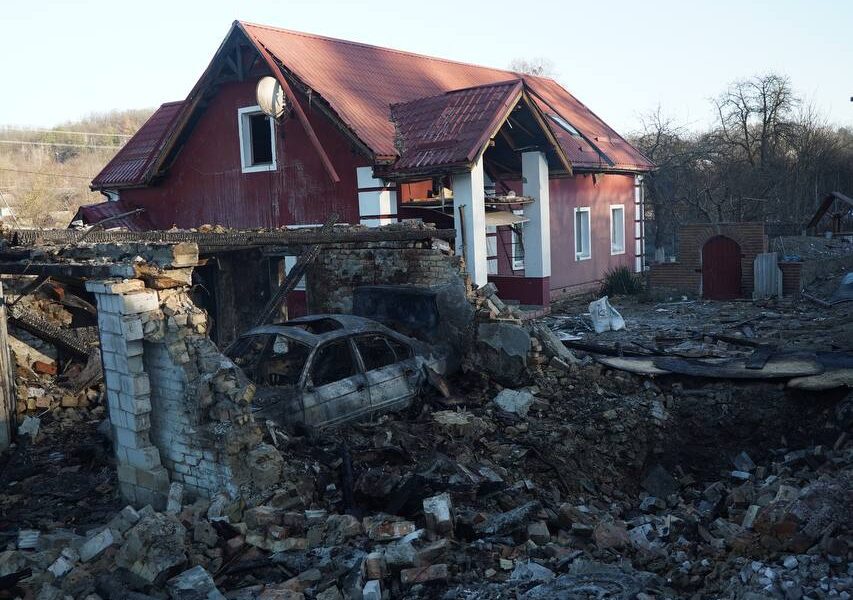 Operational information from the regions of the Active Community network 19.12.2022 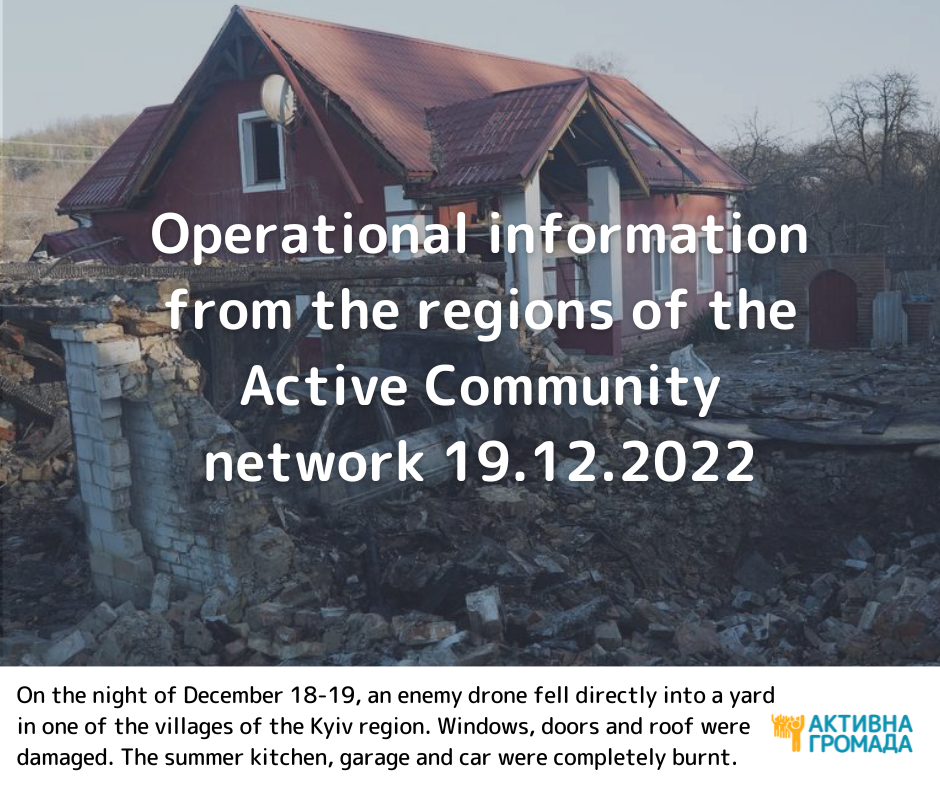 Today the enemy attacked the capital. More than 20 enemy UAVs were spotted in the airspace of Kyiv, about 15 of those were destroyed by the Air Defense Forces. Their debris damaged the roadway in the Solomianskyi district, as well as the windows of a high-rise building in the Shevchenkivskyi district. Critical infrastructure facilities were also damaged, utility workers have already managed to restore the operation of most boiler houses. The water supply system of the capital is operating normally. 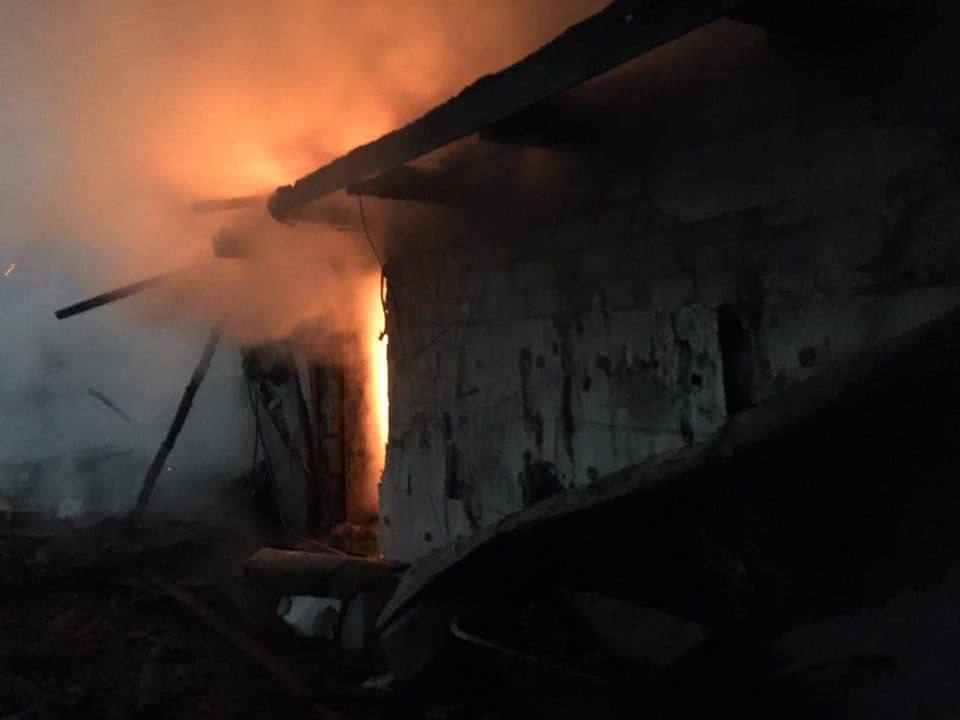 Tomorrow, two metro stations of the capital will be re-opened, “Maidan Nezalezhnosti” and “Khreshchatyk”, and the passage between them. These stations have been closed since the beginning of the large-scale russian invasion.

As a result of the night attack by Russians, the Obukhiv, Vyshhorod and Bucha raions are partially de-energized. Only critical infrastructure facilities have been restored.

At night, an enemy drone fell directly into a yard in one of the villages in the Kyiv Oblast. Windows, doors and the roof were damaged. The summer kitchen, the garage and a car were completely burnt down. The blast wave also damaged the house across the street. Commissions are already working at the sites of the damaged houses and recording the extent of damage. 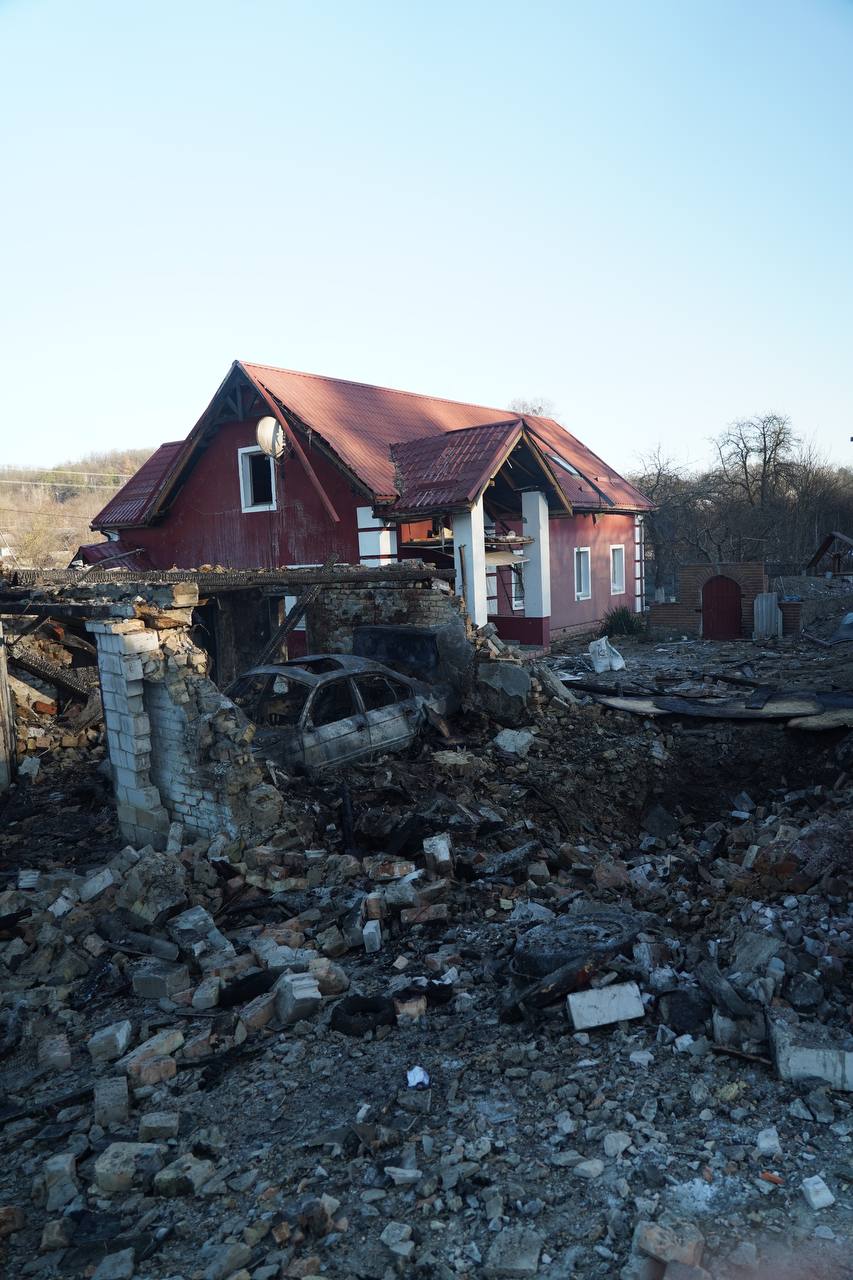 Students of 100 educational institutions of the Kyiv Oblast were taught the rules of mine safety. The training is organized within the framework of the project of the Democracy Fund at the US Embassy in Ukraine, which, in partnership with the Kyiv Oblast Military Administration, became the initiator of this humanitarian event. The training is conducted primarily in communities that were under temporary russian occupation or in the territories where hostilities took place.

In Zhytomyr, a memorandum of cooperation between the Oblast Military Administration and the Office of the United Nations High Commissioner for Refugees was signed. During the meeting, the participants discussed the possibilities of reconstruction and construction of housing for the residents of the Zhytomyr Oblast, who suffered from the full-scale invasion of the russian federation of Ukraine.

The staff and students of Lyceum No. 14 in Zhytomyr sent thermal underwear, socks, gloves and goodies to the soldiers. They collected almost 90 thousand hryvnias in just one week. These funds were used to purchase 120 sets of thermal underwear, socks and 60 pairs of gloves for defenders. Thus, the institution decided to give their warmth to the military and congratulate them on the holidays

Educators of the Zhytomyr community transferred 300 sets of thermal underwear to the soldiers of the 95th Brigade. Parents’ community and teachers of the city joined the action “Warm the defender you’re your warmth”

Today, the russians shelled the Semenivka community. The enemy presumably fire tube artillery to shell the area of the village of Karpovychi. The military recorded eight explosions.

The area of the village of Tymonovychy came under fire of, presumably, tube artillery. There, too, eight explosions were recorded.

Yesterday, 26 strikes were launched from the territory of russia using various weapons against settlements in the Sumy Oblast. There were no injuries.

Today at 7 a.m. the russian military shelled the Znob-Novhorodske community with mortars.

The enemy continues shelling the settlements of the Kharkiv Oblast, which are located not far from the border with the russian federation and the line of contact. The Kupiansk Raion suffers the most from shelling.

In the village of Dvorichna, a private house and outbuildings were damaged as a result of russian shelling. There were no casualties.

Also during the day, the enemy fired at the areas of Vovchansk of the Chuhuiv Raion, Strilecha and Hlyboke of the Kharkiv Raion, Novomlynsk of the Kupiansk Raion, and other settlements.

Mine clearance continues in the de-occupied territories of the oblast. During the day, pyrotechnics of the State Emergency Service defused 218 explosive devices.

On December 18, the russians killed three civilians in the Donetsk Oblast: two in Bakhmut and one in Torske. 4 more people in the oblast were injured.

Since the beginning of the full-scale russian invasion of Ukraine, 1,268 civilians have been killed by enemy missiles in the Donetsk Oblast, and another 2,757 have been injured.

In the Lysychansk direction, one person died in Torske (Lyman community).

Due to the low voltage, boiler houses cannot work fully. An emergency stop of some of them is reported.

Two branches of Privatbank are reopening, which will greatly facilitate access to banking services.

Almost 400 kilograms of gingerbread houses from Saint Nicholas were received today by the children of Sviatohirsk Community (the villages of Dolyna, Yatskivka, Rubtsi and Khrestyshche). Volunteers handed over these sweet treats for them.

In the east of the Pokrovsk Raion, Mariinka and the outskirts of Kurakhivka were shelled during the night, and Avdiivka came under artillery fire in the morning. There was no information about the victims. 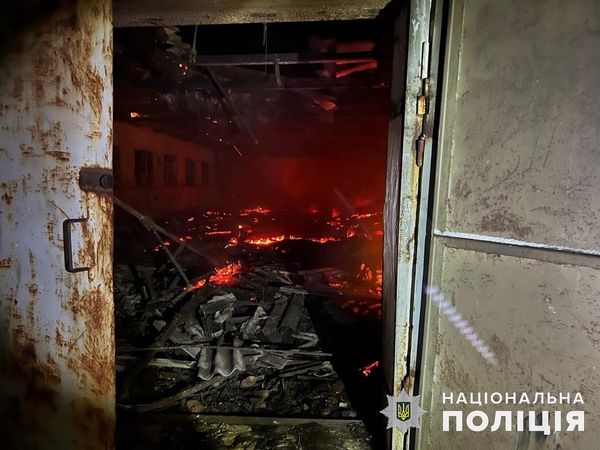 Officials and volunteers of the city’s military administration began distributing sanitary kits from the NGO “Cluster of Industrial and Craft Manufacturers of Ukraine” to residents of Avdiivka in mid-September. In addition to Avdiivka, this humanitarian aid is also provided to Avdiivka people in Pokrovsk and Myrnograd.

Today, on Saint Nicholas Day, the Pokrovsk city military administration organized a festive and entertaining event for the students of the “Myloserdya” [“Mercy”] rehabilitation center for persons with disabilities.

In the Horlivka direction, 2 people died and 3 were injured in Bakhmut. 2 private houses were damaged in the city. In Siversk, as a result of shelling, the administrative building was destroyed. In Paraskoviivka (Soledar community), a private house was also destroyed.

In the Svatove and Kreminna directions, the advantage is on the side of the Armed Forces of Ukraine. The russians are on the defensive there.

In Bilohorivka, the Ukrainian military is on the defensive, the enemy is unable to advance.

This morning, the russian occupiers shelled the center of Kherson again. They hit the building of the oblast military administration. A hole from a projectile hit can be seen in one of the walls. Probably, the shelling was carried out from “Grad” multiple launch rocket systems. There were no casualties or injuries.

On December 19, as a result of russian shelling, an administrative building caught fire in one of the city’s neighborhoods. The projectile hit the building and exploded on the first floor. The fire was extinguished. 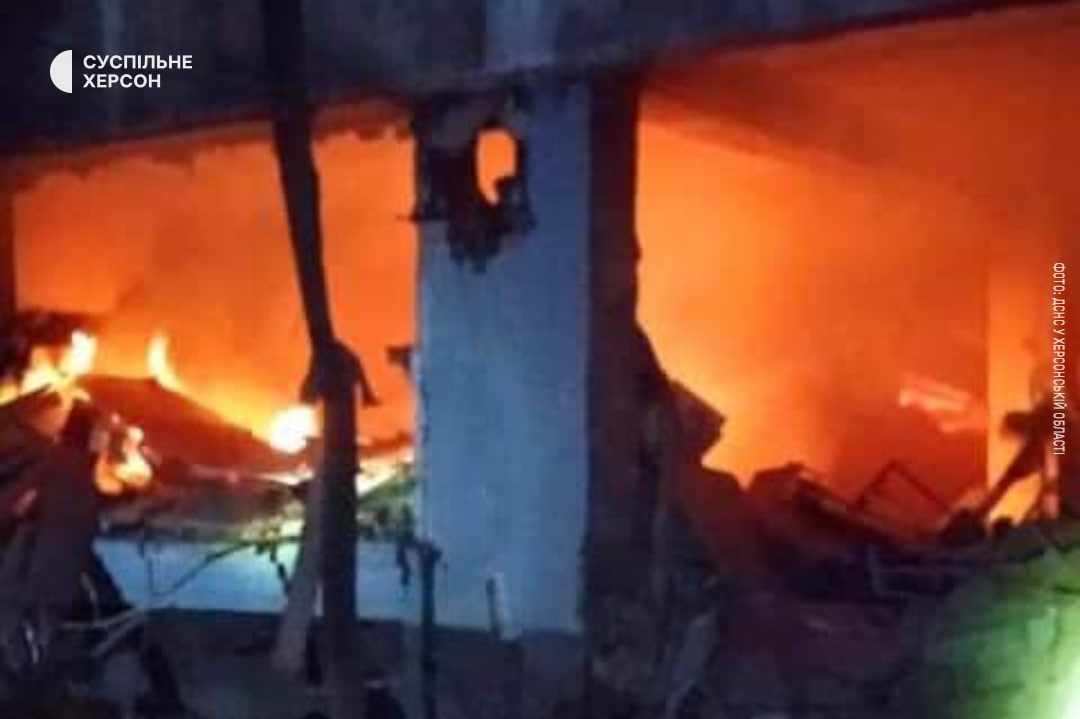 A solemn farewell was held in Kherson for the conductor of the oblast philharmonic Yuriy Kerpatenko, who was killed by the russian military. He was shot in his own apartment for refusing to cooperate. Yuriy refused to organize a concert for the Day of Music for the occupation authorities. The date of death on the plaque is September 27, 2022. The conductor was buried almost three months later. The investigation is still ongoing. 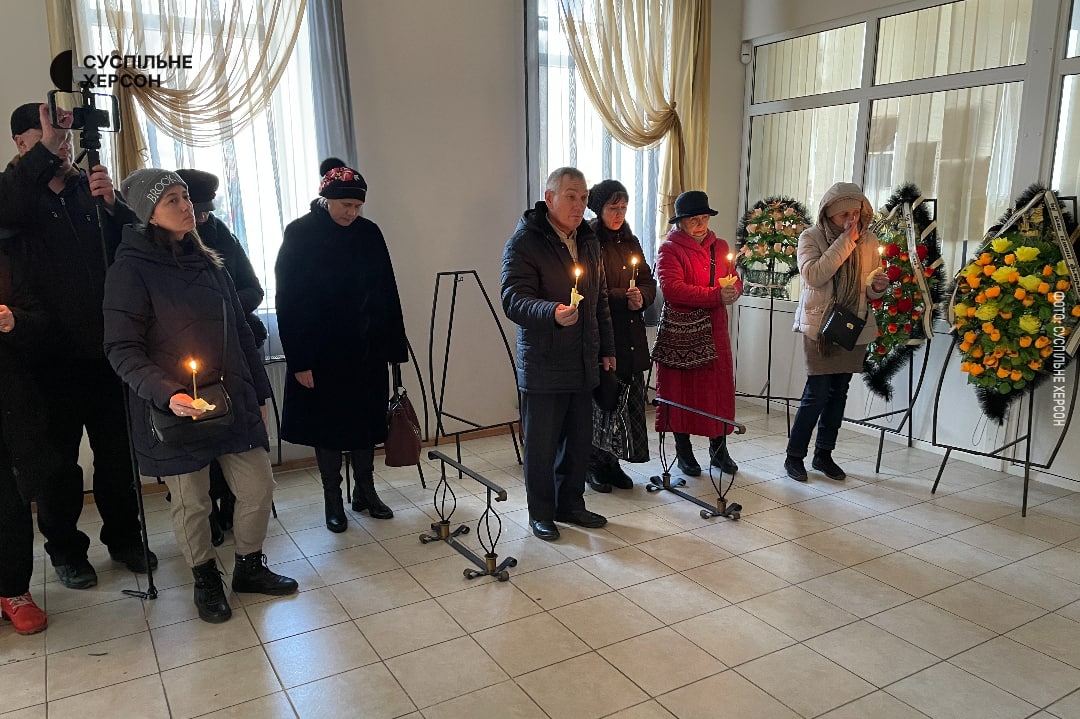 The Security Service of Ukraine has established the identity of an official-collaborator who is setting up water supply to russian military bases in Crimea. He turned out to be the former head of the Lower Dnipro Basin Water Resources Department.

10,894 explosive objects were neutralized by the pyrotechnic units of the State Emergency Service in the de-occupied settlements of the Kherson Oblast since the beginning of demining of these territories.

In Kherson, 36 out of 46 boiler houses resumed operation. 880 out of 1,156 residential buildings were connected to the centralized heat supply system.

Yesterday, the enemy shelled the water area of ​​Ochakiv community with multiple rocket launchers. There are no casualties.

A charity concert and fair in support of the Armed Forces of Ukraine was held in the City Palace of Culture in Svitlovodsk of the Oleksandria Raion. Local choreographic groups joined the concert. During the concert and the fair, the organizers raised UAH 35,800. The funds will be used to help the military.

In Kropyvnytskyi, on St. Nicholas Day, festive illuminations were lit on 12 trees dedicated to hero cities, the Armed Forces of Ukraine and volunteers.

More than 60 tons of aid from 15 communities of the Rivne Oblast were sent to the Donetsk Oblast to the liberated city of Lyman. Eight trucks were completely filled with grocery sets, vegetables, conservation vegetables, medicines, hygiene products, as well as building materials for restoration work. Help was unloaded at the Lyman volunteer headquarters. Also, part of the aid was delivered to the local hospital and firefighters.

The educational family of the Varash community prepared greetings and gifts for the defenders on the eve of St. Nicholas Day. Homemade stuffed cabbage rolls, pancakres, meat dishes, pies with various stew fillings and necessary items were given by general secondary and preschool education institutions for their military compatriots in the east of the country. In particular, the Varash Lyceum No. 2 prepared “dry” borscht, socks, underwear and gingerbread, which the children of the institution painted in the heating station.

The charity run “Rivne St. Mykolas Run 2022” gathered more than 200 participants. The traditional event, the fifth in a row, took place in the Park of Glory. The organizers will direct part of the money from the registration fees to the Armed Forces and Territorial Defence Forces. A festive hat is mandatory for participation. The exact number of participants and the amount raised during the race will be announced by the organizers after everything is counted

Today, parents of displaced aged 5 to 8 received gifts for St. Nicholas’ Day. The Residence of the Miracle Worker began its work in the exhibition hall. Various cultural events will be held there for children. The community decided not to deprive the children of the holiday, despite the war.

Bukovyna said goodbye to the brave soldiers who fought for Ukraine’s independence: on their last journey, senior soldiers Anatoly Drebit were held in the village of Vikno, Viktor Ursul in the city of Sokyriani, Serhiy Godniuk and Valentyn Chupak in the city of Novoselytsa. Glory and eternal memory to Heroes.

Mykola Myhovych’s son has been fighting in the Donetsk Oblast for almost ten months. At the age of 27, he is already a platoon leader. In order to support his son and his siblings, the father, together with the residents of the village of Babyn, in the Kelmentsi Raion, bought a jeep for the front line.

In schools of Chernivtsi, the length of lessons has been shortened. Parents were asked to dress their children warmly. This was done so that they would spend less time in educational institutions and not freeze. After all, it is cold in most schools due to the fact that the boilers that provide heat to the buildings are not working because of the power outage.