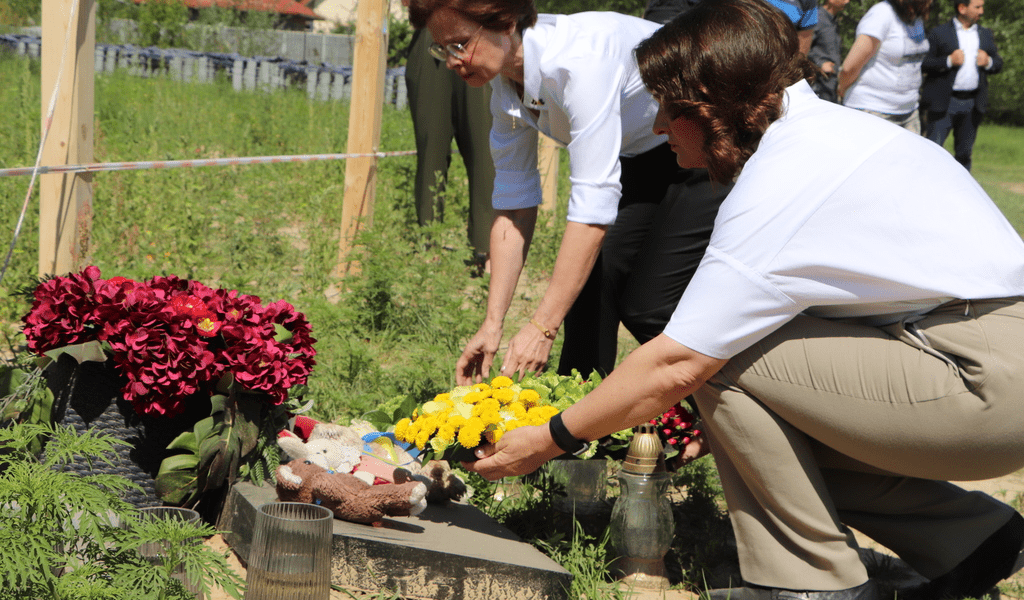 Operational information from the regions of the Active Community network 23 July, 2022

As part of the First Ladies and Gentlemen Summit, the First Ladies of the Republic of Latvia, Andra Apine-Levite, and the Republic of Lithuania, Diana Nausėdienė, visited Kyiv Oblast. They visited Bucha and Irpin, as well as the Irpin Multidisciplinary Intensive Care Hospital. It was this health care facility that worked all the time during the fighting and provided qualified assistance to the residents of the hromada. The representatives of Latvia and Lithuania expressed their support for Ukraine. 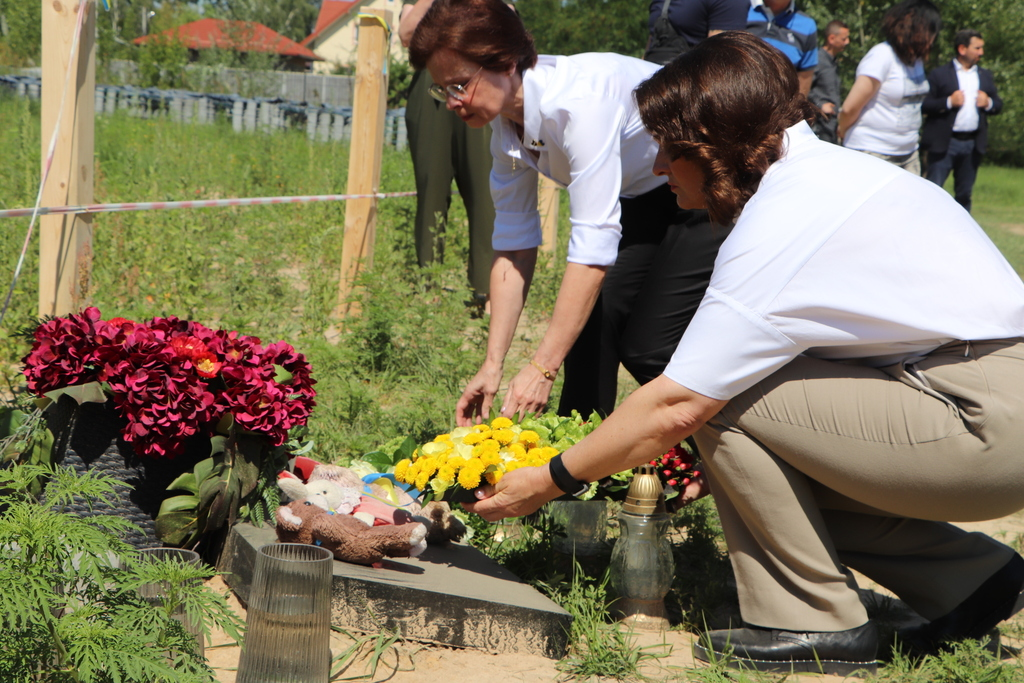 Modular-type community areas in the city of Bucha, Borodianka and Makariv have already been established and are functioning on the territory of the region. Modular houses in these localities cover the need for a temporary settlement of more than 1,000 people.

A tractor exploded on an anti-tank mine in the vicinity of the village of Andriyivka, Buchansky district, during agricultural work. The tractor driver did not receive any injuries. Rescue services are on site.

A well-known chess coach from Zhytomyr, 91-year-old Leonid Novofastovsky, donated 28 thousand hryvnias, collected by chess fans to print his next book on the development of the chess movement in the Zhytomyr Oblast, for the needs of the Armed Forces of Ukraine.

The Humanitarian Headquarters of Zhytomyr Oblast Military Administration handed over almost 12,000 mattresses for arrangement of places for internally displaced persons.

The coordinator of the All-Ukrainian Initiative “Active Community” conducted focus groups on the challenges of IDPs.

Residents of Mena urban hromada appealed to the deputies of the city council to suspend the activities of the Ukrainian Orthodox Churches, which were previously called the Moscow Patriarchate.

More than three hundred Chernihiv citizens gathered in the morning in the Central Park of Culture and Recreation to take part in the sports flash mob “Running for Azovstal” in support of the Mariupol garrison. The run was organized at the request of the wives and relatives of the fighters of the Azov regiment.

After 21:00, the russians shelled the Krasnosilka hromada with mortars.

In the morning, the russians began shelling the border region from their territory. About 20 artillery hits were recorded in the Yunakivka community. Then the shelling of the Myropil hromada began, 10 hits were counted. After 7 a.m., the russians shelled the Bilopillia hromada with a grenade launcher – two hits. Later it became known that a farmer died from a shrapnel wound due to russian artillery fire.

They also fired mortars at the outskirts of one of the settlements of the Khotin hromada.

In the morning, there was an explosion in Shostka at one of the city’s enterprises. The explosion was not related to hostilities. Five people were injured by the explosion. One person died in the hospital from burn injuries. Two more were hospitalized. Two of the victims underwent chemical treatment of their wounds and were allowed to go home.

Operational situation at 10 a.m. on July 23. The russians do not stop shelling populated areas of the Donetsk Oblast. At night and early in the morning, artillery bombarded Avdiivka. They hit a transport infrastructure facility in Kostyantynivka. At about six in the morning, they opened heavy artillery fire at Toretsk, damaging at least five private houses and killing a local resident. The situation remains tense throughout the oblast. The enemy is waging a war of elimination of both people and infrastructure. 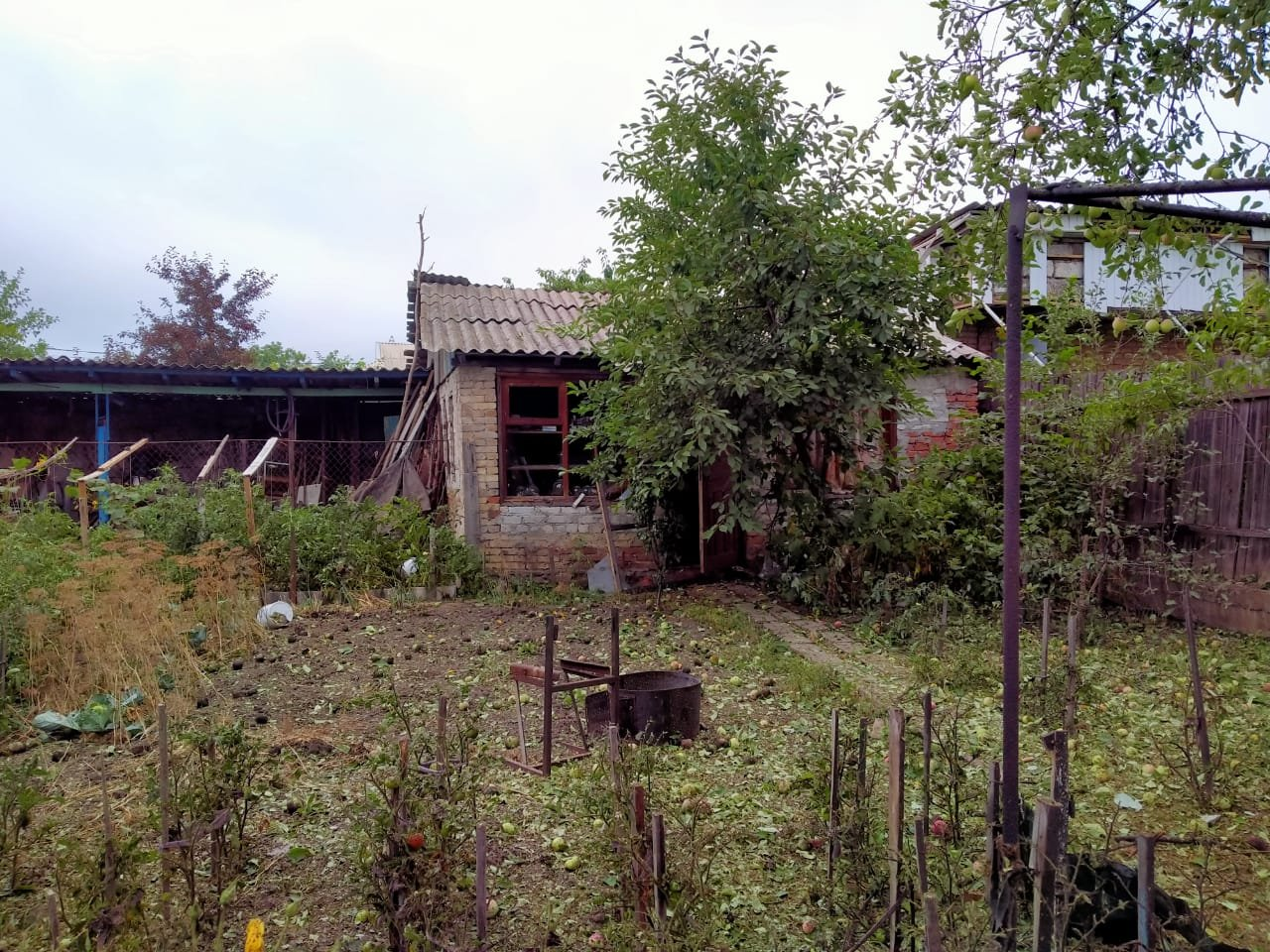 In the Kramatorsk sector, the enemy fired from tanks, tube and rocket artillery near Verkhniokamianske, Starodubivka, Pyskunivka, Siversk, Bilohorivka, Hryhorivka, Spirne, and Vyimka. Ukrainian defenders successfully repulsed the assaults in the direction of Verkhniokamianske and Siversk.

On July 22, the russians wounded 9 civilians of the Donetsk Oblast: 3 in Bakhmut, 2 in Sloviansk, 2 in Lastochkyne, 1 in Novomykhailivka, and 1 in Siversk.

Since the beginning of the russian invasion of Ukraine, as a result of shelling and bombing in the Donetsk Oblast, 637 civilians have been killed, and another 1,650 wounded.

The situation in the Avdiivka direction has not undergone any significant changes. At night and in the morning, the enemy fired artillery and also carried out airstrikes near Krasnohorivka and Kamianka.

The past day in the Pokrovsk community was relatively quiet. No facts regarding casualties and destruction were recorded during the day.

Dmytro Osipov, a talented Pokrovsk student of the pivotal school, is the only ninth-grader in the Donetsk Oblast who made it to the finals of the competition-defense of the works of the Small Academy of Sciences and took 2nd place for a holographic multimedia teacher.

In the Bakhmut sector, the occupiers shelled the districts of Yakovlivka, Soledar, Bakhmut, Pokrovske, Bakhmutske and Novoluhanske with artillery. Airstrikes were also carried out near the latter.

The enemy again conducted assaults in the direction of Pokrovskу and the territory of the Vuhlehirsk TPP, but again suffered losses and retreated.

Three civilians were wounded by the enemy in Bakhmut.

The coordinator of the AUI “Active Community” helped in the arrangement of the charity auction.

On the night of July 23, Rashist troops shelled the Nikopol and Kryvorizky raions. There is damage to electricity networks and gas pipelines, agricultural machinery is damaged.

Brigade fighters from the Dnipropetrovsk oblast captured an enemy tank.

Since the beginning of the full-scale war in the Dnipropetrovsk oblast, almost 4,000 pieces of ammunition have been destroyed.

136 migrant doctors were employed at the Dnipro hospital.

The head of the Dnipro Terrodefense Center, Gennady Korban, had his foreign passport confiscated upon entering Ukraine at the checkpoint.

In Dnipropetrovsk Oblast, more than 10,000 homes without electricity due to bad weather and shelling were restored.

A running flash mob was held in Dnipro in support of the defenders of Mariupol.

The oblast coordinator of AUI “Active Community” gathered people and participated in a focus group on the situation of forcibly displaced persons in Dnipro.

The enemy fired 13 missiles (8 sea-based Kalibr missiles and 5 Kh-22 missiles from TU-22 M3 aircraft) at the Kropyvnytskyi raion of the Kirovohrad Oblast. The occupiers targeted infrastructure facilities outside the city. In particular, the military airfield “Kanatove” and one of the facilities of “Ukrzaliznytsia”. As a result of the attack, three people died – a military man and two employees of the departmental security. Nine more servicemen were injured.

Rescue and pyrotechnic units are working on the spot. Currently, part of one of the micro districts remains without electricity in the regional centre. Oblenergo emergency crews are working on solving the problem.

The head of the Kirovohrad Oblast Military Administration, Andrii Raykovych, once again called on citizens not to ignore the alarm signals and to immediately take shelter. 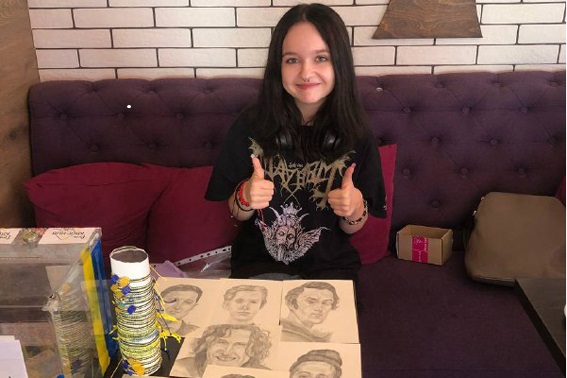 Today, in the Palace of Culture “Svitlopilskyi” in Alexandria, a farewell was held for Pavel Bordyugov – a military pilot who died while protecting his native land from the enemy. Eternal glory and honour to the Hero!

Almost 67% of parents are “in favor” of online learning in schools – results of a poll in the Poltava community. The format of the educational process will be clear from the situation in the city before the beginning of the school year.

At the meeting of the executive committee, a decision was made to hand over 330 turnstiles and 130 first-aid kits, which were provided by the International Solidarity Fund, to the military.

Poltava region received a new batch of humanitarian aid for medical facilities weighing about half a ton. These are international kits for emergency medical assistance, designed for 10,000 people for three months. They were developed by the WHO and are intended for priority needs in health care. The kits contain analgesic, antipyretic, anti-inflammatory drugs, tablet and injectable antibacterial drugs, medical products, dressing materials, as well as consumables necessary for the treatment process, surgical and therapeutic patients.

On July 23, near the Holy Assumption Cathedral, an exhibition of creative works by the masters from the educational and production pottery workshop of the Opishnyan Art Lyceum will be held.

It starts at 16:00. The program of the event includes: pottery master classes; making charms from fabric; exhibition and sale of ceramic products and textile products of the creative team of the lyceum; studio about the world of ceramics “Colors of Ukrainian ceramics” by Anatoly Shcherban. All funds from the sale and master classes will be transferred to the needs of the Armed Forces of Ukraine.

Oleksandr Loza, a 47-year-old Ukrainian soldier from the Khorolsk community of the Poltava region, died near Kramatorsk. 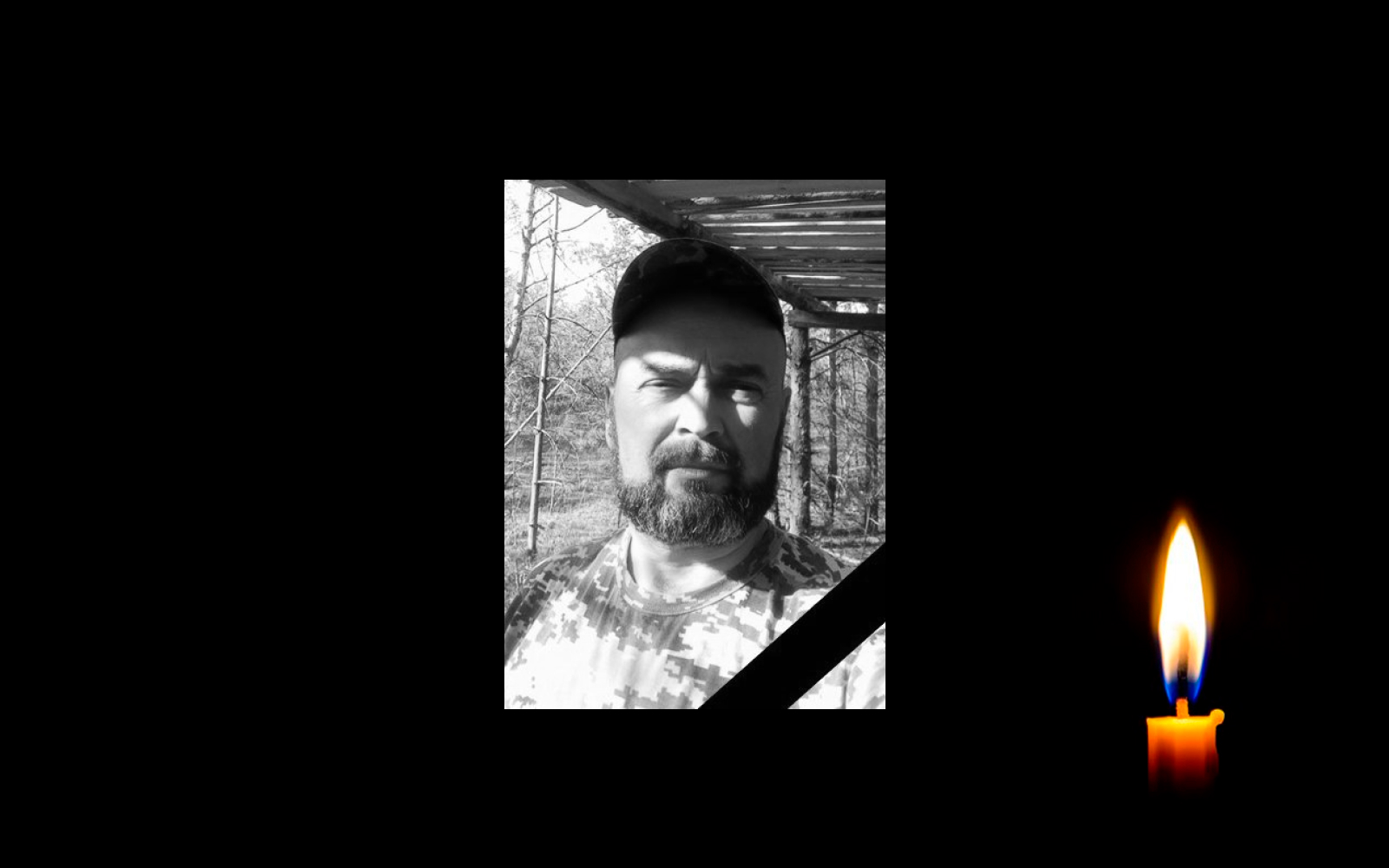 The team of the Ukrainian Initiative “Active Community” of Poltava held an art therapy event “Paper fantasies” for families of internally displaced persons on the premises of kindergarten No. 59.

The past day passed peacefully in the Khmelnytskyi community.

A revolver, ammunition for it and a sawn-off shotgun were found by the police at the home of a resident of the Khmilnytskyi district during a search.

Today, the people of Khmelnytskyi said goodbye to the defender of Ukraine, who died in the battles for Mykolaiv Shurk Serhiy Bohdanovych. 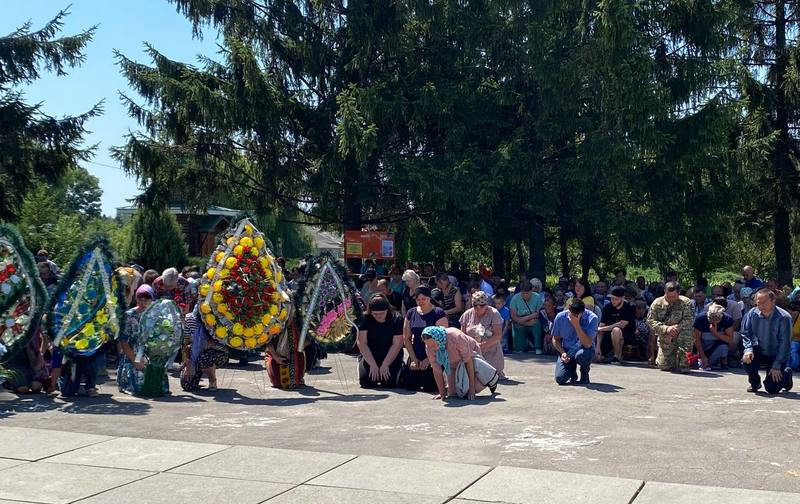 The coordinator of the Ukrainian Initiative “Active Community” of Khmilnyk and Khmilnytskyi district was preparing for the next event.

The general situation is relatively calm, as of 16:30 there was one air raid siren.

Soldiers of the Armed Forces of Ukraine patrol the border with Belarus. Representatives of the territorial defense patrol are on duty at checkpoints.

The Head of the Rivne oblast military administration, together with the Head of the National Police of Ukraine, visited one of the towns in the Rivne oblast, where they plan to relocate patrol police officers from the Donetsk and Luhansk oblasts. Premises for them have already been found. They discussed its arrangement. It is important not only to carry out repair work there but also to find housing for police force’s families.

A sports charity flashmob “Running for Azovstal” took place in Rivne. The event was organized by the “Azovstal” Association of Defenders’ Families. Those willing to join and run in support of the “Mariupol” garrison gathered on the morning of July 23 in Taras Shevchenko Park. In general, according to the calculations of the organizer Yulia Bondarchuk, 70 participants ran in support of the “Mariupol” garrison.

Local deputies handed over medicines, dry rations, anti-mosquito protection and goodies to the Ukrainian soldiers in the east.

At the Zdovbytsky Lyceum, camouflage nets are woven for the needs of the Armed Forces of Ukraine.

Humanitarian aid for internally displaced persons (clothes and shoes) is distributed on the premises of the Zdovbytskyi Lyceum.

A local volunteer gave donated powdered milk and sweets for the soldiers.

In the morning, an air warning signal sounded in the region for more than an hour, but currently, the situation is calm and under control.

Assistance for forced migrants was handed over to the Khotynsk community. These are mattresses, bed linen, blankets, and pillows. They arranged 35 beds for internally displaced persons in the Khotyn Children’s and Youth Sports School.

Mykola Daskalyuk, a resident of the Brusnytsk community, donated a night vision device to the soldiers at the front.

In Chernivtsi, the public organization “Let’s Do It, Ukraine” has set up a shelter for displaced people who volunteer. Five bedrooms and a work area were created in the house. https://suspilne.media/260376-u-cernivcah-oblastuvali-prihistok-kovorking-dla-volonteriv-z-insih-regioniv/

Since the beginning of the war, Bukovina has received four tranches of medical supplies from the Government of Bavaria, with a total value of about 250,000 euros.