Operational information from the regions of the Active Community Network April 24, 2022

The 60th day of the Ukrainian people’s heroic struggle against the russian military invasion goes on. 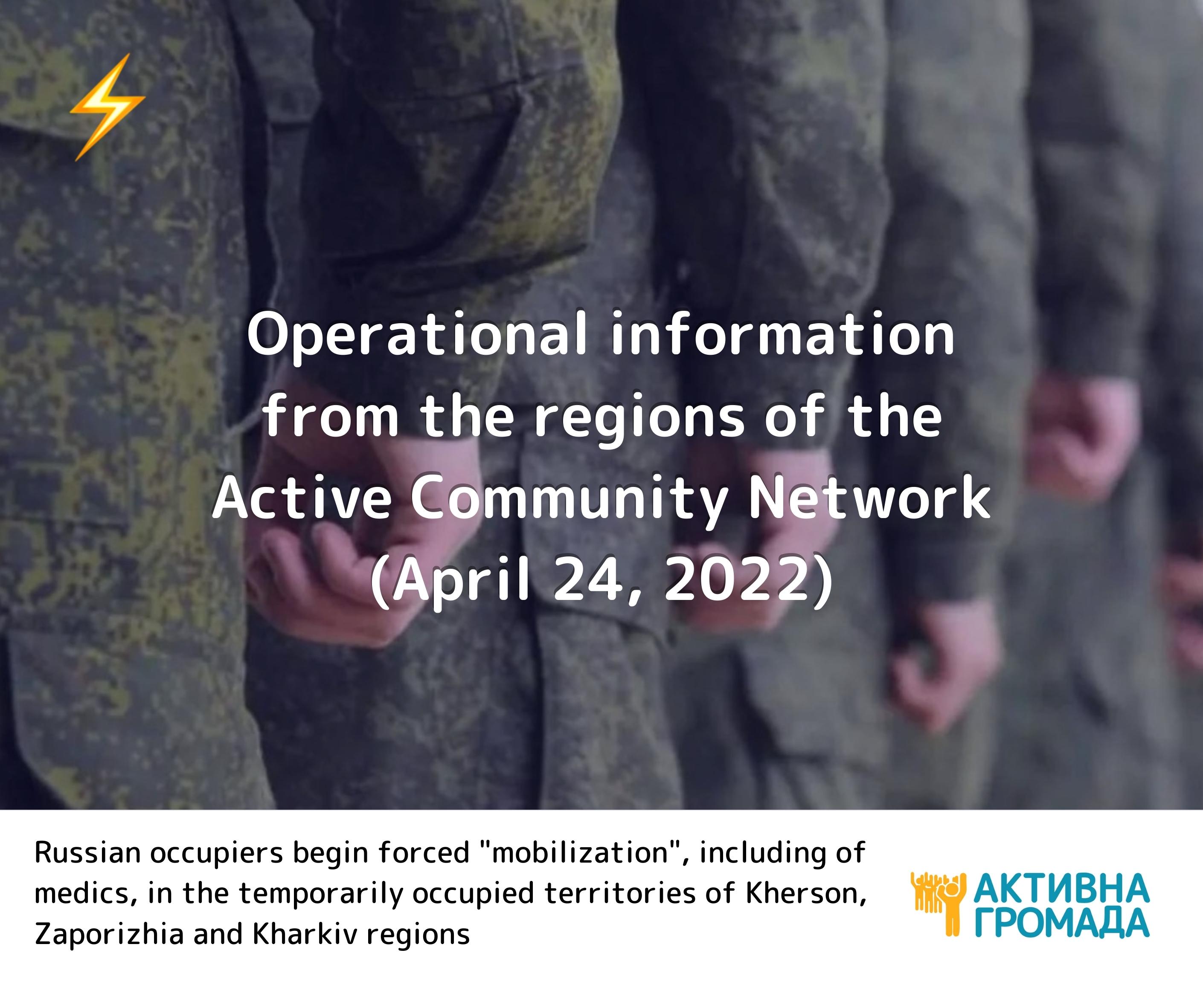 The 60th day of the Ukrainian people’s heroic struggle against the russian military invasion goes on.

Russian occupation troops offensive in the East Operation Area continue to aim to defeat the Joint Force group, establish complete control over the territory of Donetsk and Luhansk oblasts, and ensure a land bridge to the temporarily occupied Crimea.

There has been no active enemy engagement in the north of Ukraine.

In the Kharkiv Oblast, the transfer of the enemy’s armaments and equipment into the area of Kupiansk continues. The invaders persisted with the partial siege of Kharkiv and tried to inflict fire damage to Ukrainian units and critical infrastructure facilities.

Aggressor units boosted their offensive and assault efforts in the areas of Pashkove, Dovhenke, and Velyka Komyshuvakha. The enemy has not seen any success and has had to retreat to previous objectives because of losses.

In the Donetsk and Luhansk oblasts, the enemy continues beefing up their control and air-defense systems. Ukrainian troops’ positions are under mortar, artillery, and MRL shelling along the whole LoC. The invaders also use their task air force to deal with strikes from above. The enemy has tried storming in the direction of Lyman and Yatskivka, though without success. The invaders have taken over a part of Zarichne. They have also tried entrenching in the western, northwestern, and eastern parts of Rubizhne, but with no luck. The russians began advancing towards Orikhove and Nyzhne.

Russian occupation troops continue assaulting and shelling the area of Azovstal Mill in the Mariupol direction. Airstrikes have been made against certain individual civil infrastructure facilities. The invaders have attacked towards Vremyivka but, with losses sustained, had to retreat to their earlier positions.

The russian invaders are limiting rights and freedoms and, specifically, the right of free movement of peaceful civilians on the temporarily occupied territories of Ukraine.

There have been two air raid alerts within the past 24 hours. Since the start of their engagement, blast technicians have defused 360 UXOs since April 23rd and 21789 UXOs. After the invasion, Bucha is coming to life: people have come to the local church to bless Easter bread.

The situation is calm in the Oblast. The Oblast has welcomed the holy fire from Jerusalem. The transfer took place on Soborna Square near the Memorial to Defenders of Ukraine during the war with the russian aggressors. The memorial light with a part of the fire from the Holy Sepulchre has been accepted by the children who evacuated to the Oblast from the east.

The situation in the Oblast is under control. The Prosecution Office has presented suspicion in bombarding Ukraine to a russian airman Krasnoyartsev detained in Chernihiv. He earlier confessed to killing a civilian who chased him with a garden fork after he had catapulted from the downed jet.

The last farewell was bid in the village of Slobidka on Easter Eve to Oleksiy Rotach, a Ukrainian serviceman. He died on April 21st in Dnipro hospital after being seriously wounded during the fight with the enemy on March 26th.

Sumy Oblast Military Administration informs that the provocation shellings of Bilopillya, Nova Slobidka, and Putyvl communities neighboring the border with russia continues. Today, the artillery shelling from the russia side of the village of Atynske, Bilopillya community has left the local psychoneurological border house without windows or doors. Private households have been damaged in the village of Boyaro-Lezhachi, Nova Slobidka community. No casualties have been reported.

Parents of the Sumy Cadette Corpse alumni are protesting against the institution transfer to Khmelmytskyi: they deem the military school is not ready for the transfer and say it amounts to winding it up. The parents held a meeting at the Cadette Corpse on April 23rd.

The russian invaders shelled Chuhuiv, leaving three wounded, among them the mother with 12 y.o. child.

In the course of the fighting in the area of ​​the settlement of Marinka and most other combat areas, the enemy had no success. The Armed Forces of Ukraine repulsed the enemy. Representatives of the Territorial Defense Forces patrolled the city.

This Easter morning, the lives of two girls from the Ocheretyno community were cut short. The invaders ruthlessly destroyed the house on Myr (Peace) Street, where their family lived. The children were 5 and 14 years old.

The Donetsk Oblast Prosecutor’s Office reported the detention of a traitor to the Motherland. The pre-trial investigation established that in April 2022, a 28-year-old resident of Pokrovsk voluntarily collaborated with the occupation army of russia. The perpetrator sent messages from his account on the social network “Vkontakte” to a russian army representative, which contained information about the location of military personnel and military equipment of the Armed Forces Of Ukraine in certain areas of the Donetsk Oblast.

Over the past day, the russians fired 12 times at peaceful houses of the inhabitants of the Luhansk Oblast residents. The towns of Hirske, Zolote, Lysychansk, and Severodonetsk suffered damage. In Rubizhne, a private building was engulfed in flames at night. In Severodonetsk, five houses and the national police building were destroyed simultaneously.

In the Luhansk Oblast, the russians destroyed at least seven Orthodox churches, the Bismillah Islamic Cultural Center in Severodonetsk, and the Baptist prayer premises in Metiolkine. The trunk gas pipeline was cut off in the Hirske community, and the transformer substation was on fire.

The Head of the Popasna City Military-Civil Administration has collected and now is organizing the delivery of humanitarian aid to Popasna. It is transported to those community settlements, which can be reached more or less safely. People are given food, water, and Easter cakes.

Russian invaders began to forcibly mobilize not only the military but also doctors in the temporarily occupied territories of the Zaporizhzhia Oblast. The russians use civilian trucks to transport military cargo and use stolen agricultural equipment for military needs.

In occupied Berdyansk, the russians, in addition to inspecting cars, check pedestrians: they write down their passport data, inspect personal belongings, and examine their bodies for tattoos. Berdyansk residents report that local Telegram channels receive messages from russian phone numbers. They contain misinformation that the Armed Forces of Ukraine (AFU) are allegedly preparing to shell and bombing of peaceful settlements in the area. Probably, the russians are planning provocations to blame later the Ukrainian soldiers. The invaders are spreading a fake message that the United States organizes provocations at chemical facilities in Ukraine. Among the potential targets is the Zaporizhzhia Nuclear Power Plant. The russians may cause damage to this nuclear facility.

Over the past day, the russian military carried out artillery shelling of several settlements. It is known about the destruction in Zaliznychne and Staroukrainka and the people killed in Kamianske. Due to the danger of artillery shelling near Orikhiv, the Zaporizhzhia Oblast Military Administration asks to refrain from traveling in this direction.

The number of people abducted by russian terrorists is increasing in the Zaporizhzhia Oblast. It is known that 182 civilians were held hostage, and 100 of them have already been released.

The Operational Command “South” reported that in the Kherson Oblast, the Ukrainian military took control of eight settlements from the positions of observation posts. Also, the Ukrainian forces defeated the russian units that had accumulated in the Kyselivka area to further advance on Posad-Pokrovske. Having suffered significant losses, the russian troops retreated towards Chornobaivka.

Last night, the AFU shot down two russian cruise missiles, which were fired from the Black Sea and headed in the direction of the port of Pivdennyi in the Odesa Oblast.

There are already more than 160000 refugees in the Dnipropetrovsk Oblast. Yesterday, russian occupation troops fired missiles at the Pavlohrad Raion. One rocket hit the railway infrastructure. A 48-year-old man was killed. Eight buildings were destroyed. Three cars and one truck were buried and ruined under the rubble. The blast shattered the windows and blocked the door of the nearby residential building. Two missiles hit an industrial enterprise. As a result, the production building was destroyed, and the traction substation was damaged.

The day passed quietly. The situation in the community is under control. Soldiers of the Armed Forces of Ukraine (AFU) guarded the Oblast’s borders and military facilities. Territorial Defense Forces fighters were on duty at checkpoints and patrolled the city with police. The regional coordinator of AUI “Active Community” provided food assistance to citizens and was on duty at the St. Nicholas the Wonderworker Humanitarian Center at the Parish of the Nativity of St. John the Baptist of the Ukrainian Greek Catholic Church.

There were two air alarms in Poltava. Poltava patrol officers handed over almost 300 Easter cakes and drawings from children to their colleagues in Kharkiv.

The humanitarian headquarters, located in the Center for Culture and Leisure, treated the children living in the city’s kindergartens with delicious Easter cakes. Almost 400 cakes were distributed. Shops, pharmacies, and cafes are open in Poltava. Transport runs on schedule. Festive services in churches and temples took place without extraordinary events and violations.

In the city, sirens twice sounded the air alarm. In the first case, according to the Air Command “West” of the Air Force of the AFU, it was a missile threat due to a raid by strategic enemy aircraft from the Black Sea. The second alarm also warned of missile danger from the Black Sea.

The general situation was relatively calm, and there were no air alarms. The AFU patrol the border with belarus, and Territorial Defense Forces patrol and are on duty at checkpoints.

Citizens are united and help volunteer headquarters financially and immaterially. The Head of the Rivne Oblast Military Administration and the mayor of the Rivne community congratulate the citizens on Easter.

“Buy a helmet – help the military” – under this slogan in Uzhhorod, artists launched a flash mob “Antidote”. The money raised will be used to purchase modern protective equipment.