Operational information from the regions of the Active Community network August 21, 2022

The one hundred seventy-ninth (179) day of the heroic resistance of the Ukrainian people to a russian military invasion continues.

The one hundred seventy-ninth (179) day of the heroic resistance of the Ukrainian people to a russian military invasion continues. 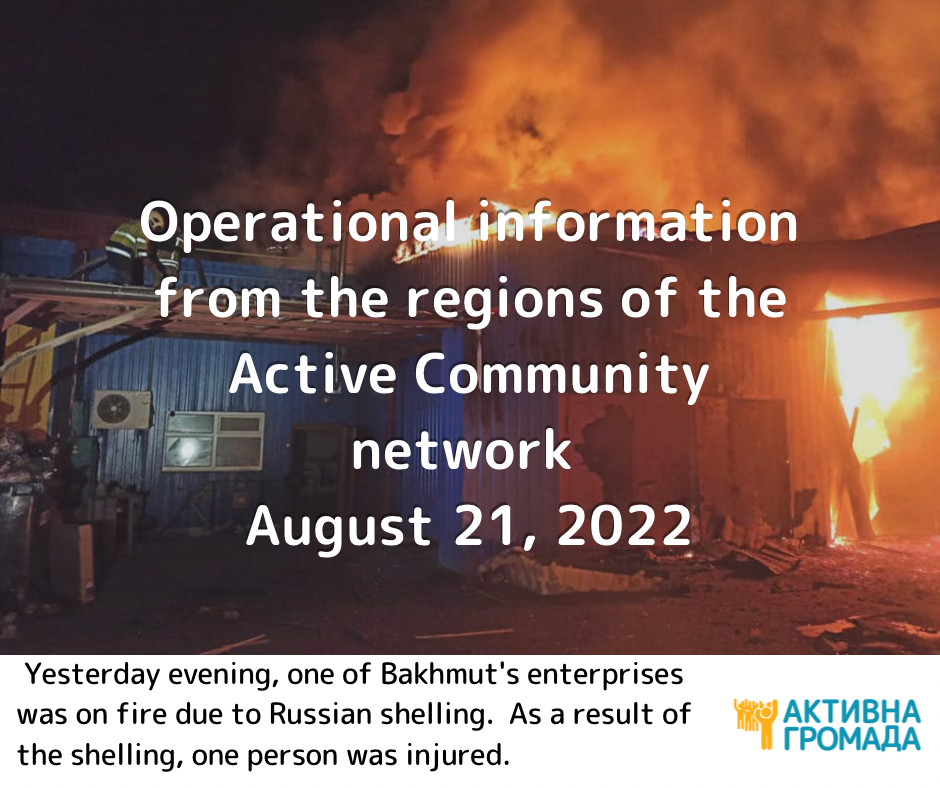 In the capital city, near the Arsenalna metro station, Kyiv Mayor Vitaliy Klitschko, together with the mayors of 8 European cities, opened a new art installation that symbolizes the unity of Kyiv and Kharkiv. This art installation was created to be placed on the central square of Kharkiv to mark the day of the city. Due to the constant shelling of Kharkiv by the russians, it is now impossible to install this piece of art there. So, the authors proposed to decorate the public space of Kyiv with giant drops. The mayors of 8 European cities on behalf of the Eurocities political platform expressed their support for Ukraine and Kyiv. The heads of the cities also assured that they were ready to help Ukrainians in the struggle for independence and in the reconstruction of Ukrainian cities that had been mutilated by the russian aggressor.

In the Kyiv Oblast, they continue to document the crimes committed by the army of russian invaders on our lands. The Maidan Museum team is also engaged in this work. They collect different things at Lyceum No. 2 in Hostomel, which confirm the presence of the occupiers in the territory of the Kyiv Oblast. These items will be used as an evidence base, after which they will be museumified.

An undetonated BM-21 “Grad” rocket was found on the territory of the Pushcha-Vodytsiaт Forestry. 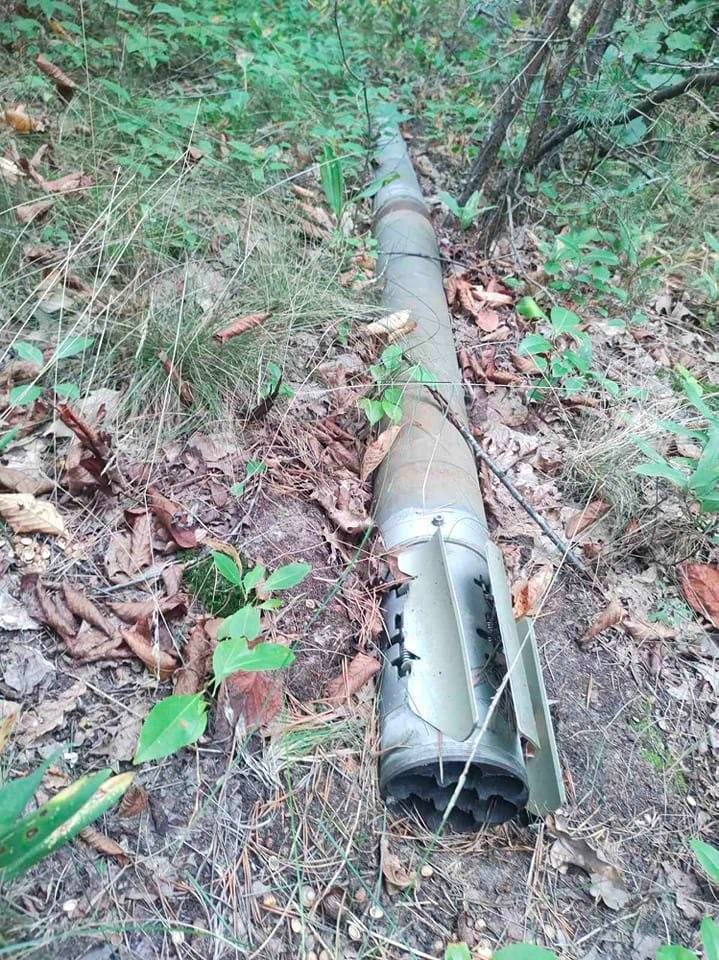 Yesterday, on the occasion of the World Humanitarian Aid Day, the Irpin City Council presented certificates of appreciation to numerous volunteers and philanthropists who helped and continue to help the residents of the community during the war.

Within two weeks, more than a hundred houses and buildings of the social sphere, damaged by russian shelling, were restored in the Zhytomyr Oblast, namely, private and multi-story buildings, cultural institutions and other social buildings.

The Security Service of Ukraine reported about another female collaborator from the Zhytomyr Oblast. In recent days, seven local residents have been exposed for openly supporting a full-scale russian invasion, calling for the surrender of Ukraine and justifying its so-called “defascization”. In particular, a resident of the Korosten Raion convinced her fellow villagers that the rashists had come “to protect and liberate”. Meanwhile, her son defends Ukraine on the front line.

The coordinator of the AUI “Active Community” was preparing for the art therapy, which will take place on August 22.

On August 20, the Chernihiv Oblast said goodbye to soldier Ihor Brahyda, who was killed in action in the Donetsk Oblast.

The russians shelled two communities in the Chernihiv Oblast with tube artillery and mortars. Three russian mines of 120 mm caliber exploded on the territory of the Semenivka community. The shelling was conducted from the russian settlement of Lomakovka.

The Novhorod-Siversk community was fired upon from the russian village of Sluchovsk. The enemy opened fire from tube artillery, the border guards recorded four hits.

On August 20, the russian military shelled four communities in the Sumy Oblast: Buryn, Bilopillia, Khotyn, and Znob-Novhorodske. At almost 3 p.m., the Buryn community was shelled from the russian territory. The shelling was carried out using tube artillery; 4 hits were recorded. Artillery shelling resumed at 17:25 – 4 more hits.

After 4 p.m., the russians started firing mortars on the Bilopillia community, 4 hits were recorded. From 4:40 p.m., 12 more mines were fired.

10 shots were fired on the territory of the Khotyn community after 4:30 p.m.

No enemy shelling was recorded in Kharkiv last night, however, the russian occupiers launched missile attacks at the oblast.

At around midnight, missiles were launched from Belgorod targeting the village of Rohan, Kharkiv Raion. One missile hit an unfinished private house, causing a fire. Two people were injured.

Two missiles hit the village of Dokuchaievske, Kharkiv Raion, damaging the outbuildings of the educational institution. A fire broke out in an open-air area.

Over the past day, the enemy continued to shell the civilian population of the Kharkiv Oblast. The Kharkiv, Bohodukhiv and Izium raions were under fire. Private houses and outbuildings were damaged, garages and office buildings were on fire.

Search operations continued at the site of a missile hitting a three-story residential building in the Saltivskyi district. The bodies of 3 more victims were found. This brings the total number of deaths from this strike to 18.

During the day, the russian occupiers tried to storm the positions of the Armed Forces of Ukraine in all sectors in the Donetsk Oblast: Avdiivka, Bakhmut, Kramatorsk, and Sloviansk. Everywhere the russians suffered losses and retreated.

The Ukrainian military in the Donetsk sector hit a cluster of russian occupiers and destroyed two russian tanks, an infantry fighting vehicle, a vehicle with ammunition, and a self-propelled artillery mount.

The enemy carried out an offensive reconnaissance in the direction of Pasika – Bohorodychne, had no success and withdrew.

In the Kramatorsk sector, the enemy carried out shelling from tube and rocket artillery near Siversk, Hryhorivka, Verkhniokamianske, and Ivano-Daryivka.

The russians launched an offensive in the direction of Berestove – Ivano-Daryivka, but were unsuccessful.

On August 20, the russians killed 4 civilians of the Donetsk Oblast: 2 in Heorhiivka, 1 in Avdiivka, and 1 in Paraskoviivka. 2 more people were wounded.

Since February 24, the russians have killed 755 civilians of the Donetsk Oblast, and wounded another 1,943.

On August 21, in the Pokrovsk community, they said goodbye to Ukrainian serviceman Yevhen Prokhorov, a combat medic of the 1st mechanized platoon of the 4th mechanized company of the 2nd mechanized battalion of the A0536 military unit.

Every day the occupiers bombard the settlements of Avdiivka, Kurakhovo, and Maryinka in the east of the Pokrovsk Raion, using missiles, tanks, air bombs, and artillery.

The past day in the Pokrovsk community was relatively quiet. No casualties or destruction were recorded.

During the day, power lines and equipment were damaged in another 29 settlements of the Avdiivka Military-Civilian Administration; power supply was restored in five settlements

Evacuation from the front line. Residents from Avdiivka and Ocheretyno are evacuated in armored vehicles.