Operational information from the regions of the Active Community network August 25, 2022

The one hundred eighty-third (183) day of the heroic resistance of the Ukrainian people to a russian military invasion continues.

The one hundred eighty-third (183) day of the heroic resistance of the Ukrainian people to a russian military invasion continues.

In Kyiv, the name of the Prime Minister of Great Britain, Boris Johnson, was engraved on a plaque on the Alley of Courage.

Last night, the Motherland Monument was lit up in the colors of the Ukrainian flag. 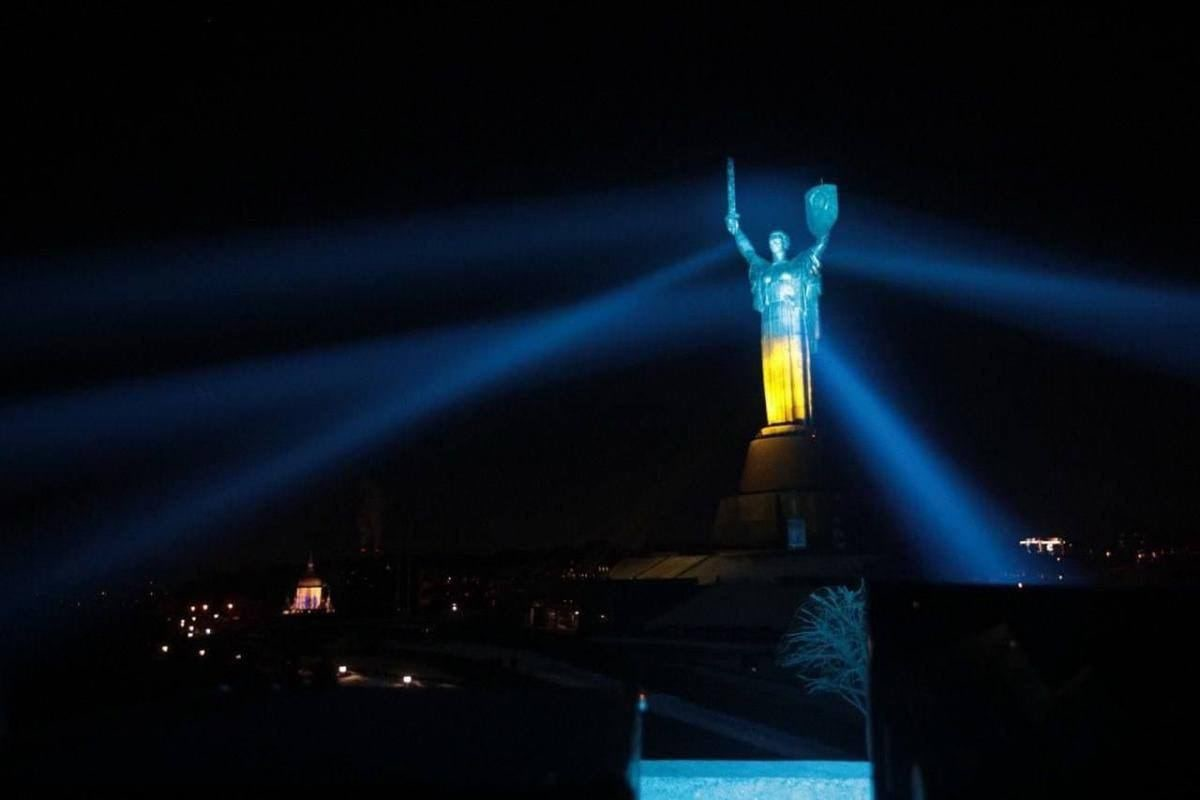 At night, the enemy launched a missile attack on one of the communities of the Vyshhorod Raion. Two hits were recorded. There were no casualties or wounded among civilians. There were neither fires nor destruction of residential buildings or infrastructure facilities. 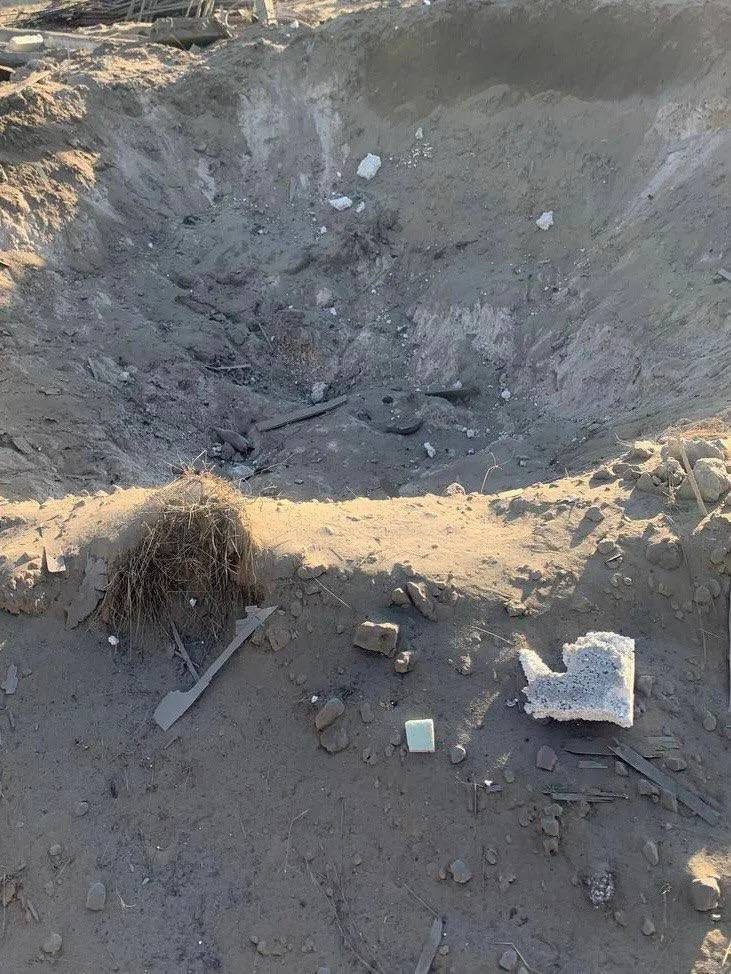 In the Bucha and Vyshhorod raions, disposal of the remnants of explosive items is ongoing.

In Irpin, on Poltavska Street, the drinking water purification and deferrization plant was restored and put into operation. This strategic facility was fired upon and disabled by the russian invaders during hostilities on the territory of the community.

Enterprises of the Kyiv Oblast are resuming production and exports more actively than in other regions. The biggest difficulties for businesses in the Kyiv Oblast are the safety of work, the lack of fuel, and transportation of raw materials or goods across the territory of Ukraine.

Yesterday, despite the increased danger of missile attacks, the Minister of Foreign Affairs of Portugal, Juan Gomez Cravinho, and the Ambassador Extraordinary and Plenipotentiary of Portugal to Ukraine, António Vasco Alves Machado , visited the Zhytomyr Oblast on a working visit. The head of the Zhytomyr Oblast Military Administration, Vitaliy Bunechko, together with his first deputy Natalia Ostapchenko, Mayor of Zhytomyr Serhiy Sukhomlyn, and representatives of specialized structural divisions of the oblast military administration met with their foreign partners. Despite the constant air strikes, they discussed an extremely important issue – the restoration of the infrastructure of the Zhytomyr Oblast damaged as a result of missile attacks. 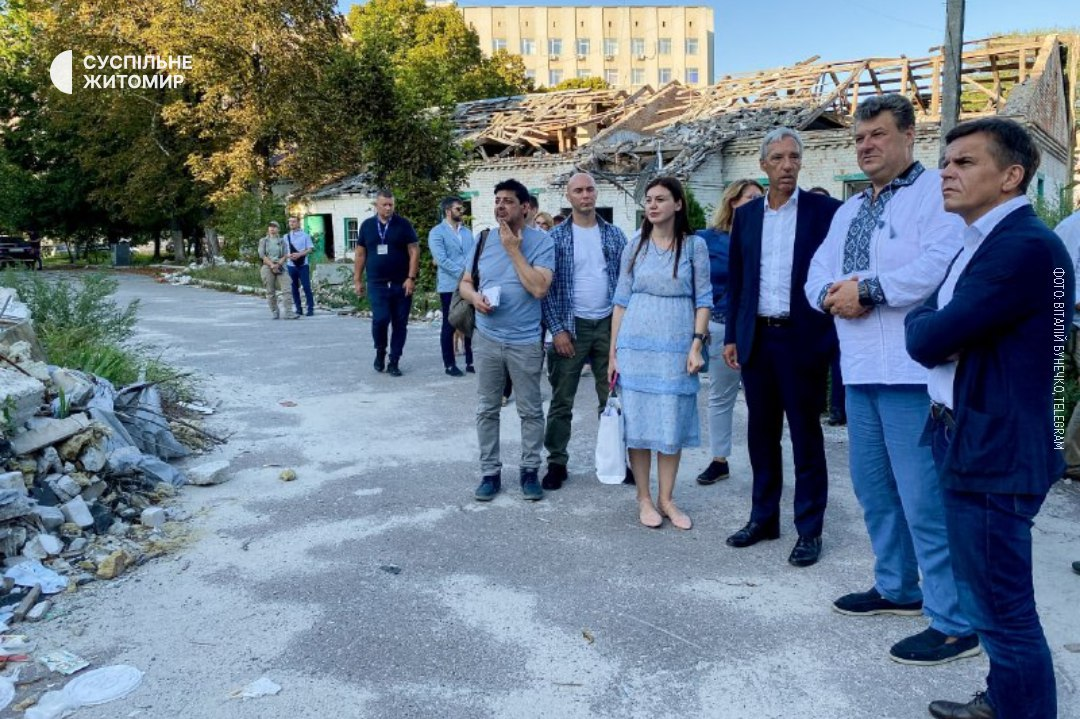 In Zhytomyr, they said goodbye to 33-year-old soldier Maksym Lishchynskyi, who was killed in action on August 18 in the Donetsk Oblast.

A grenade was found tied to a tree in the Korbutiv forest. There were no casualties, because the people who discovered the find observed all the rules for handling explosive items.

Yesterday, two enemy “Orlan” drones were shot down by the Ukrainian military several dozens of kilometers away from Chernihiv.

During the day, the russian military shelled the border communities of the Sumy Oblast. Around 10 a.m., 7 explosions were recorded in the Bachivsk area of the Shostka Raion. The enemy fired tube artillery. At 12 p.m., there were 5 explosions in the Znob-Novhorodske territorial community, probably resulting from firing an 82 mm mortar.

After 3 p.m., the shelling of the Esman community began: three hits from tube artillery.

Also, in the afternoon, a russian drone was shot down on the territory of the Shostka Raion.

This morning, the russian military shelled the Velyka Pysarivka community in the Sumy Oblast. The fire came from tube artillery. As a result, a fire broke out. 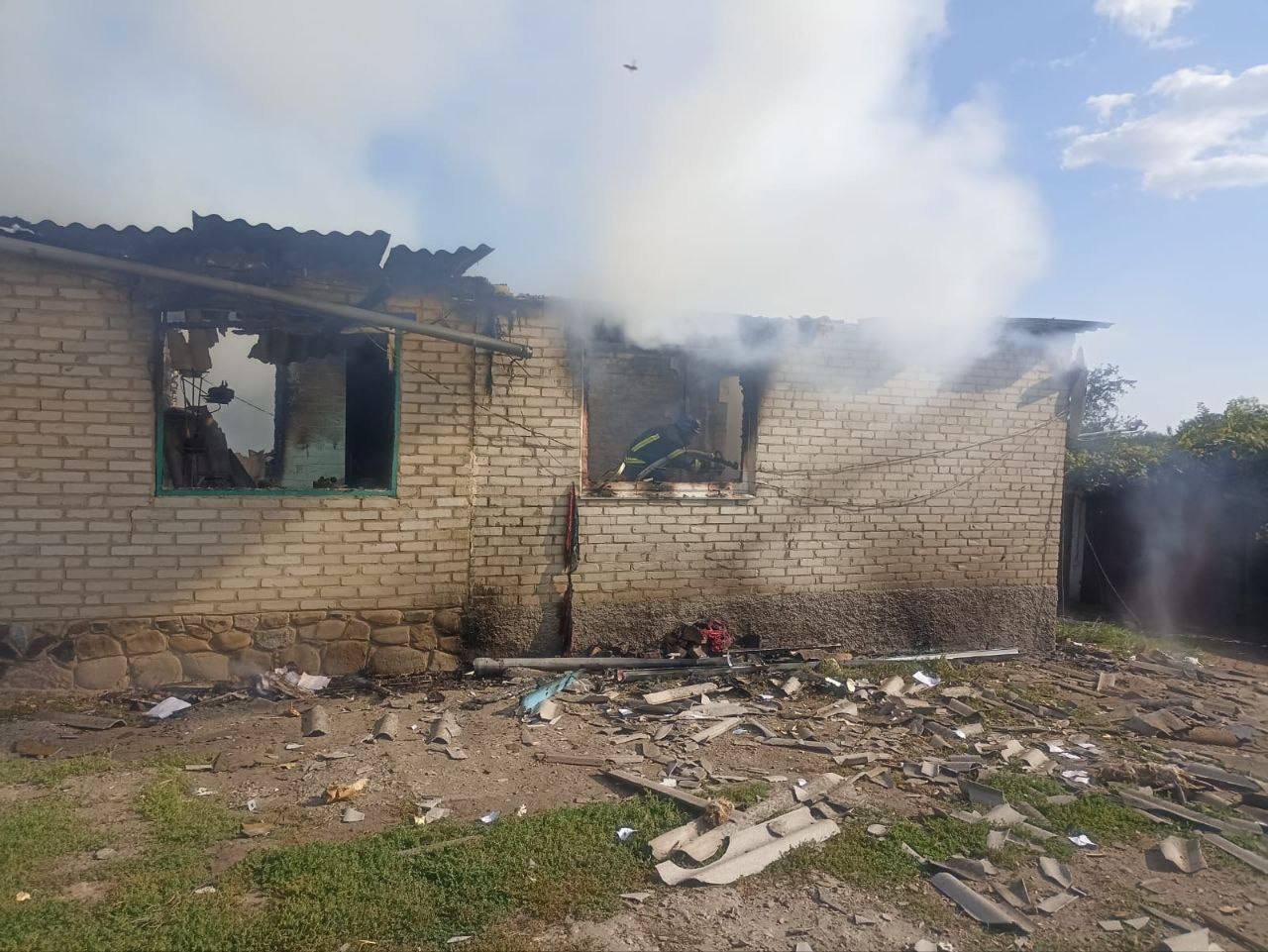 During the past day, the enemy shelled the city of Kharkiv, as well as the Kharkiv and Bohodukhiv raions of the oblast.

At about 9 a.m. on August 24, the russians shelled the Shevchenkivskyi district of Kharkiv. An educational institution was damaged.

The settlement of Mala Danylivka in the Kharkiv Raion was most intensively shelled by the enemy. Private houses and outbuildings were damaged, several fires broke out. 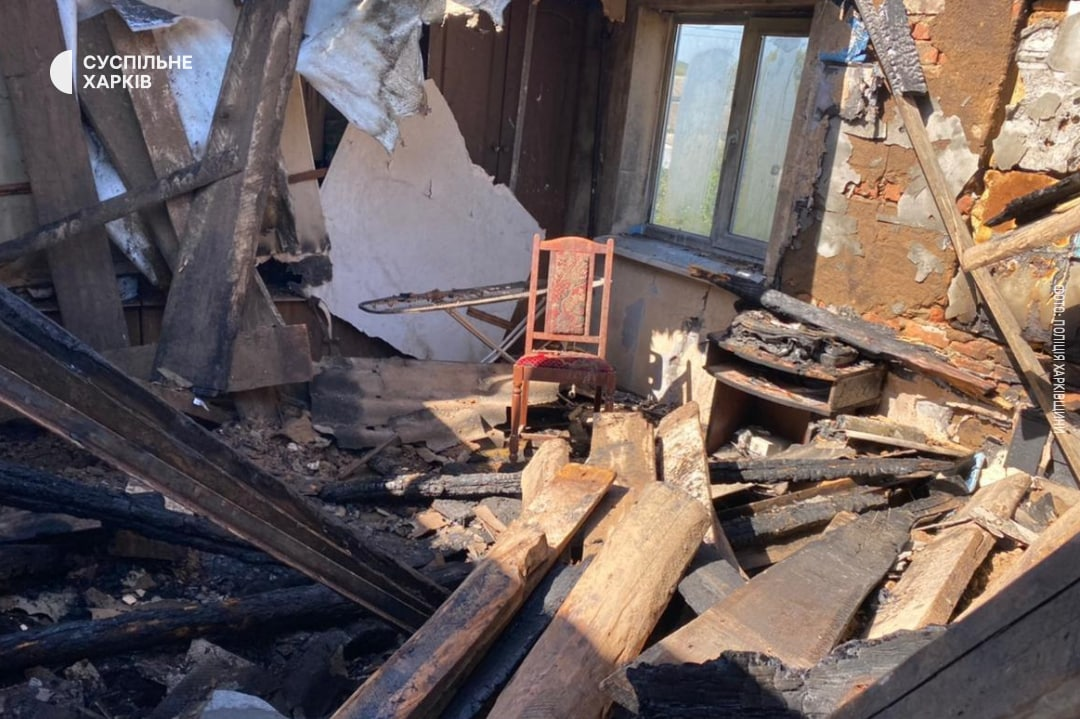 In the Kharkiv and Bohodukhiv raions, grass was burning in large open areas due to shelling.

During the day, 2 civilians (men aged 39 and 48) were hospitalized with injuries in Malia Danylivka.

Today, the russians shelled the village of Lebiazhe in the Chuhuiv Raion. An enemy shell hit a residential building. A 62-year-old man was killed. His 41-year-old wife was wounded and hospitalized. Doctors assess her condition as stable.

In the Kramatorsk sector, shelling from tanks, tube artillery, and multiple rocket launchers was recorded near Spirne, Ivano-Daryivka, Zvanivka, Serebrianka, and Siversk.

In the Avdiivka sector, the enemy inflicted fire damage on the Pokrovsk, Netailove, Pervomaiske, Orlivka, Vodiane, Novobakhmutivka, Shumy, and New York areas. Enemy aircraft operated near Maryinka, Krasnohorivka, and Nevelske. The enemy tried to launch an offensive in the direction of Pisky – Pervomaiske, but had no success and retreated.

On August 24, the russians killed 3 civilians of the Donetsk Oblast, namely in Soledar. 1 more person was wounded.

Since February 24, the russians have killed 762 civilians of the Donetsk Oblast, and wounded another 1,953.

Explosions were heard in the city again around 4 o’clock in the morning. No damage was reported. Neighboring Sloviansk also came under fire. In the area of Darwin Street, 3 powerful explosions sounded, which damaged 4 high-rise buildings. There were no casualties.

The city authorities announced the planned departure of evacuation trains on August 26. 2 trains are scheduled to leave for Lviv and Kropyvnytskyi (with accommodation of IDPs in the Kirovohrad Oblast).

The situation in the community is complicated due to emergency situations in the power and water supply networks. Today, there was no power supply in the city and the region for about half an hour.

The coordinator of the AUI “Active Community” received a batch of medical supplies from foreign partners, which was immediately transferred to the oncological dispensary of the city.

The past day in the Pokrovsk community was relatively quiet. The facts of the casualties and destruction over the past day were not recorded.

Residents of the village of Krasnohorivka received food packages.

Humanitarian support for residents of the Maryinka community continues. Despite the danger of the enemy shelling, the delivery of humanitarian food packages to citizens who remain at home continues.

In the Bakhmut sector, the areas of the settlements of Bakhmut, Soledar, Vesela Dolyna, Maiorsk, Shumy, Zaitseve, Bilohorivka, Kodema, and Yakovlivka were subjected to shelling by the enemy. The enemy used aviation to inflict strikes near Soledar and Zaitseve. The invaders unsuccessfully tried to lead an offensive in the direction of Travneve – Kodema.

The russians turn Bakhmut into ruins. Every day there are series of shelling and casualties. The city was on the front line and remains one of the hottest spots in the oblast. Nevertheless, local residents believe in the Armed Forces of Ukraine and are convinced that the invaders will not enter the city.

On the Independence Day of Ukraine, Ukrainian flags fluttered over occupied Mariupol and the village of Nikolske of the Mariupol Raion. This was reported in the Telegram channel of the Mariupol City Council.

Mariupol residents are not going to participate in the occupiers’ pseudo-referendum.

Civilians found a landmine in the Veselka Park. And russian sappers had already reported three times that the park had been demined.

The russians carried out airstrikes near three settlements.

The russian invaders took to russia all 200,000 tons of grain harvested in the fields in the Lugansk Oblast.

Enemies continue to set fire to fields in the Kherson Oblast. There is a constant smoke screen and air pollution. Russians engage in looting, go from house to house, check documents and personal belongings.

If possible, people leave the city. The situation is becoming increasingly critical. Currently, Skadovsk is left without water and electricity. ATMs and banks are not working. There are fewer and fewer products in stores. Communal institutions and local occupation authorities are operating, there are all new and unknown people. Some cafes are open, but the city is empty. Air alert sirens sound constantly – day and night.

The coordinator of AUI “Active Community” together with volunteers visited the elderly, compiled new lists of products and medicines for humanitarian aid.

Last night, the city was attacked by enemy rockets of the multiple-launch fire system “Smerch”. The blow was aimed at the port infrastructure.

At night at 03:30, the enemy struck with missiles of the S-300 type. It is known about hitting the private housing area. As a result, a private house was set on fire. Several houses were also damaged.

Yesterday morning, the enemy fired at a private agricultural enterprise in the village of Kotlyareve (Shevchenkove community). Due to the fall of ammunition and their fragments, the repair workshop caught fire. As a result of the fire, agricultural machinery and the roof of the workshop were destroyed.

During yesterday’s day, the village of Novomykolaivka (Pervomaisk community) was under enemy fire. As a result of shelling, farm buildings were partially destroyed, and open areas outside the settlement were also hit. There were no casualties.

On the evening of August 24 and until the morning of August 25, there were enemy shellings outside the settlements of the Shyroke community. Around 11:00 p.m., the village of Chervona Dolyna came under fire. The hits were in agricultural buildings of households.

Shelling of the Berezneguvate community continues. Thus, as a result of enemy shelling in the morning of August 25, a residential building was destroyed in the village of Berezneguvate. There were no casualties. Also, during the past day, the enemy shelled the adjacent territories of the villages of Lepetikha and Kavkaz.

Acting the deputy mayor of Odesa, Oleg Bryndak, noted that 2022 was supposed to be the year for Odesa to implement large-scale infrastructure projects in various sectors. It was planned to implement joint projects of the city and the state: the restoration of architectural monuments, the creation of an urban park, the further modernization of the infectious disease hospital, the reconstruction of the Ivanovo overpass. It was planned to launch the “North-South” continuous tram route this year.

People are united and active, volunteer, take part in charity events. The situation is tense due to the threat of rocket attacks.

The enemy struck the village of Chapline with 8 “Iskander” missiles. Railway infrastructure and residential buildings were hit. The rocket hit 4 carriages of the train. 25 people died, including 2 children. More than 30 people were injured. Private houses, a railway station and a post office were destroyed. 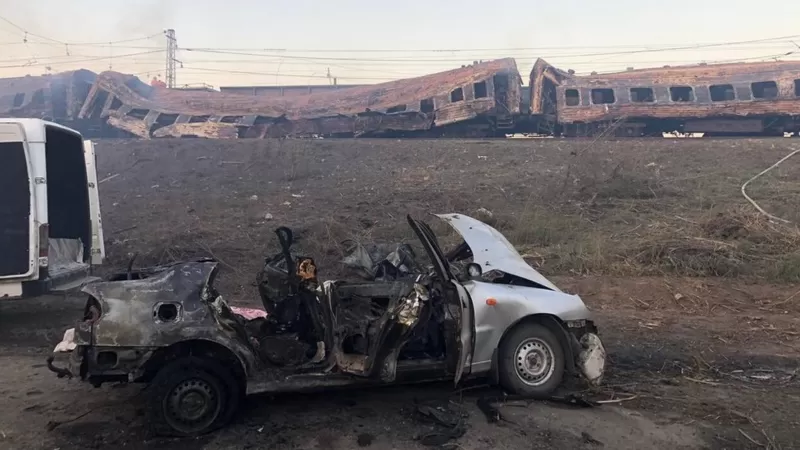 During the night, the enemy struck the Synelnikovo Raion for the fourth time and hit the Velikomykhailivka community. 8 people were injured. Among them are 3 girls, the youngest is only 2 years old. All the injured are in hospital. Several residential buildings were damaged in the community. There was a fire in one of the yards.

At night, the russians fired multiple-launch fire systems “Uragan” and “Smerch” across the Kryvyi Rih Raion. The enemy hit the Apostolove and Shyroke communities, damaged the power grid in the village of Koshove. One of the districts of Kryvyi Rih is littered with dangerous cluster shells after night shelling.

The Nikopol Raion was shelled during the night from multiple-launch fire systems “Grad” and barrel artillery.

A resident of Dnipro will be tried for treason. In March, the collaborator received a task from the russian special services. He was supposed to film locations of the Armed Forces of Ukraine and the National Guard, military equipment and infrastructure.

The Novopokrovsk community (Dnipro Raion) received 550 IDPs, 212 of them are children. Humanitarian aid is given to people twice a month. Locals harvest from the “Gardens of Victory” and prepare for winter. 550 linden trees were also planted in the community.

In Dnipro, a “Center for Helping the Rescued” was opened. Help will be provided here to all those affected by russian aggression. Victims of violence will also be accepted.