Operational information from the regions of the Active Community network August 28, 2022

The one hundred eighty-sixth (186) day of the heroic resistance of the Ukrainian people to a russian military invasion continues.

The one hundred eighty-sixth (186) day of the heroic resistance of the Ukrainian people to a russian military invasion continues. 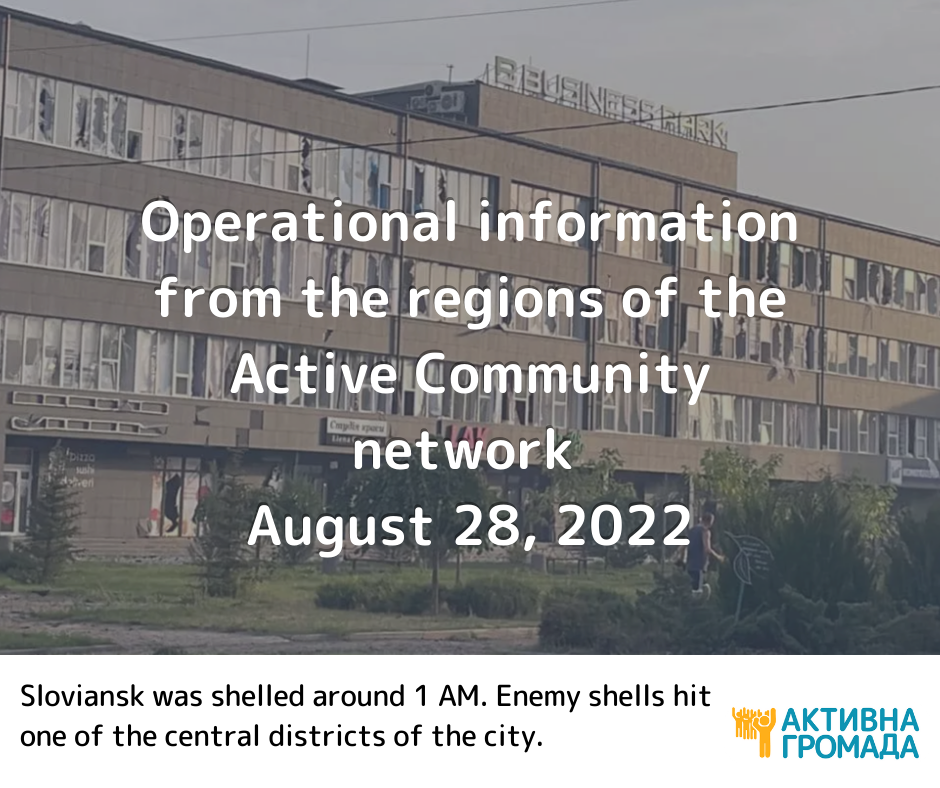 The city authorities of Kyiv want to finish renaming the objects of the capital? Which have soviet and russian names, by the end of September this year.

A 430-meter-long flag of Ukraine was unfurled in Kyiv. About 100 people gathered for the “United Ukraine” action. The flag was unfurled across the Park Pedestrian Bridge to Trukhaniv Island. The organizer of the action is Oleksandr Kniha, general director, artistic director of the Kherson Mykola Kulish Academic Theater.

Yesterday, russian troops shelled the border of the Chernihiv Oblast. The territory of the Novhorod-Siversk community came under fire from tube artillery and mortars: 20 and 23 explosions were recorded, respectively.

After 12 p.m., the russians shelled the border area of the Semenivka community. A herd of cows of a local agricultural enterprise suffered losses. Also, a house on the outskirts of the border village caught fire as a result of the shelling.

In Pryluky, they said goodbye to Yuriy Klymenko, a 28-year-old combat medic of the 95th detached air assault brigade. He was killed on August 22 in the Donetsk Oblast during a combat mission.

Yesterday, during the day, the russian military fired more than 220 shells and mines on the border areas of the Sumy Oblast. The territories of the Khotin, Myropillia, Bilopillia, and Krasnopillia communities of the Sumy Raion, as well as the Znob-Novhorodske community of the Shostka Raion, and the Nova Sloboda community of the Konotop Raion came under fire.

Today, around 6 p.m., the village of Iskryskivshchyna, Bilopillia community, was shelled with mortars from the territory of the russian federation. A total of 42 explosions were recorded. The hit was in the central part of the village, where the premises of the former school caught fire, the dormitory of the vocational school, a workshop, a post office, and a shop were also damaged.

On August 26, they said goodbye to defender Vitaliy Berdin in the village of Vilne, Okhtyrka Raion. The man fought in the Donbass since 2014, serving under a contract. On August 19, he was killed in action in the Kharkiv Oblast.

Yesterday, the russian occupiers shelled Zolochiv of the Bohodukhiv Raion and the urban-type settlement of Donets of the Izium Raion with MLRS. In Zolochiv, a shell hit a residential building. A 52-year-old woman was killed. A 49-year-old man was wounded in Donets.

Over the past day, the russians shelled at least 15 settlements in the Kharkiv Oblast with multiple rocket launchers. Airstrikes were carried out near Husarivka and Pervomaiske.

At night, the russians attacked Zolochiv, Kharkiv Oblast. No one was killed or wounded. According to preliminary data, the army of the russian federation fired from the Grad MLRS. A rocket hit the garage, five houses and a car were also damaged.

On the night of August 28, the russian army attacked the Kharkiv Raion of the Kharkiv Oblast. A missile hit the area near a children’s camp, which is now closed. The administrative building, the residential building and the canteen were damaged. As a result of the shelling, a crater was formed. According to preliminary data, the occupiers fired a S-300 missile into the city. There are no dead or wounded.

Life goes on in Kharkiv. The Kharkiv Frontier Jazz Fest took place yesterday. The event was held in an updated format that brought together academic and jazz musicians.

In the Donetsk Oblast, the Ukrainian military successfully repelled russian offensives in five sectors – Sloviansk, Kramatorsk, Bakhmut, Avdiivka, and Novopavlivka, forcing the occupiers to retreat in each of those sectors.

During August 27, the russian occupiers shelled five populated areas of the Donetsk Oblast 16 times. They fired at residential areas with missiles, artillery, MLRS, and S-300 air defense systems. As a result of shelling, 15 civilian facilities were destroyed or damaged, including eight high-rise buildings, a machine-building plant, and a railway.

Repair crews eliminated the consequences of missile attacks on the village of Chaplyne, in the Dnipropetrovsk Oblast, and repaired the evacuation trains from the Donetsk Oblast. After a one-day pause as a result of the Chaplyne tragedy and the necessary restoration work, our brave conductors, accompanied by medics, evacuated 492 people.

Kramatorsk came under fire in the middle of the night – the russians targeted the railway infrastructure and damaged residential buildings near the railway. Information about the victims has not yet been received.

Sloviansk was shelled around 1 AM: 8 high-rise buildings were damaged, one of the shells hit the schoolyard. There were no casualties.

The head of the military administration of Sloviansk met with the military and presented gratitude from the community to the soldiers defending the city. The situation remains alarming. Evacuation from the city continues.

The humanitarian cargo was transferred to the shelter, which plays an important role in the evacuation process. Thousands of people from Soledar, Siversk Bakhmut and other hotspots of the oblast found temporary shelter here.

The enemy shelled the settlements in the east of the Pokrovsk Raion of Nevelske, Krasnohorivka, Maryinka, and Avdiivka from tanks, barrels and rocket artillery.

Tonight there was a rocket attack on the territory of the Kurakhiv community outside the population centres. There were no casualties among the civilian population.

On the occasion of the 31st anniversary of Ukraine’s Independence Day, 5137 participants from 55 countries of the world performed the National Anthem of Ukraine together, thus setting a world record. Among the record holders there were representatives of the Avdiivka city military administration, as well as servicemen of the Armed Forces of Ukraine, who perform combat missions near Avdiivka.

The occupying power of the so-called “LPR” prepared a manual for teachers with recommendations for conducting the first lesson on the topic “My History” in schools. The manual contains a detailed lesson plan and incorporates all the narratives of russian propaganda about the history of Ukraine.

During the day of August 27th and the night of August 28th, the russian army shelled settlements in the Mykolaiv and Bashtan raions of the oblast. One person was injured.

Yesterday at 10:00 and at 10:30., the village of Olenivka and the village of Lyubomirivka of the Shevchenkiv community came under russian shelling. One person was injured. At approximately 15:00, farm buildings were damaged as a result of shelling in the village of Pervomaiske of the Pervomayska community. There were no injured.

Yesterday around 16:30 there was the shelling of the village of Shiroke in the Shirokiv community. As a result, two residential buildings and agricultural buildings in households were destroyed. No one was injured.

Also, on August 28th in the morning, approximately at 4:00 a.m. and 6:00 a.m., the village of Shiroke was shelled outside the settlement.

In the morning, the russian army once again shelled the village of Shevchenkove, Mykolaiv raion. As a result of shelling by russian troops, one house was destroyed, and another residential building caught fire.

Shelling of the territory and nearby settlements of the Berezneguvat community continues. According to preliminary information, there are no victims. Damage information is being updated.

The city authorities report that the situation is generally under control, but the threat of rocket attacks remains.

People are united and active, volunteer, and take part in charity events. The situation is tense due to the threat of rocket attacks.

The coordinator of the Ukrainian Initiative “Active Community” provided information to citizens about receiving psychological, social, and humanitarian assistance.

Air raid sirens sounded in the community. Currently, the situation is calm and under control.

Kropyvnytskyi volunteers will make bourjuki(heaters) for the Armed Forces of Ukraine, metal is needed so they collect consumables materials. Kropyvnytskyi Krop:hub told: “Although we believe in our Armed Forces of Ukraine and in the fastest victory, we have to prepare. In just a few months, the war in the trenches will be very cold and raw, so we need heaters! And a lot.”

The book “From Lyshnevsky to Vinkovsky” by Volodymyr Polishchuk, a local historian and researcher of the history of Kropyvnytskyi and the Kirovohrad region, was presented in the Chyzhevsky library.

Dmytro Lunin, together with regional council deputy from “Servant of the People” Fahraddin Mukhtarov, handed over the three SUVs purchased by the latter to the Poltava military. These cars have increased cross-country ability, in camouflage colors. 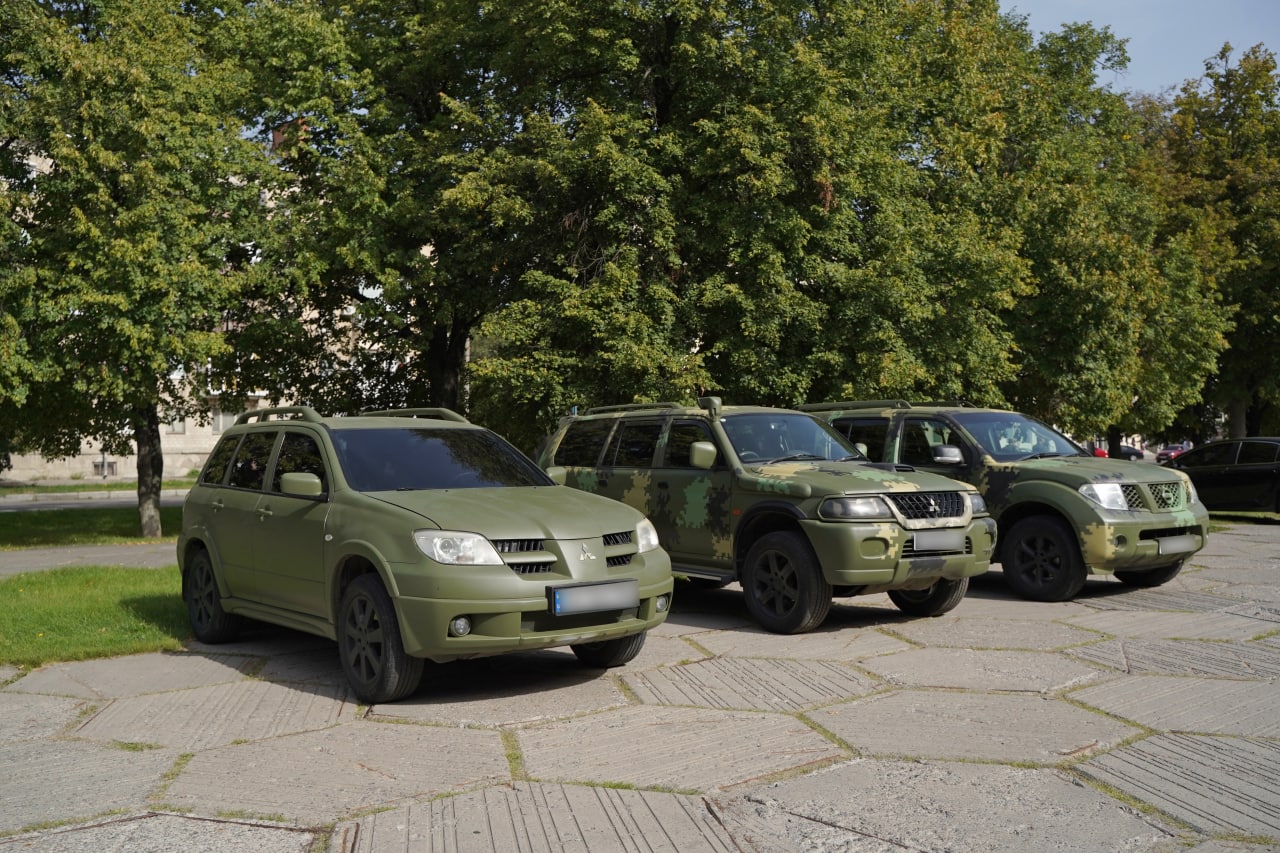 Families of people who died as a result of a rocket attack on the “Amstor” shopping center received help from the regional budget – 50 thousand hryvnias per family. The specified payment has already been transferred to personal bank accounts.

With the assistance of the Ministry of Reintegration from the Government of Poland, 1,000 aid kits were delivered to the region, each of which includes a folding bed, mattress, sheet, pillow, pillowcase, blanket, and towel. This assistance is needed to accommodate evacuated people from the Donetsk region. 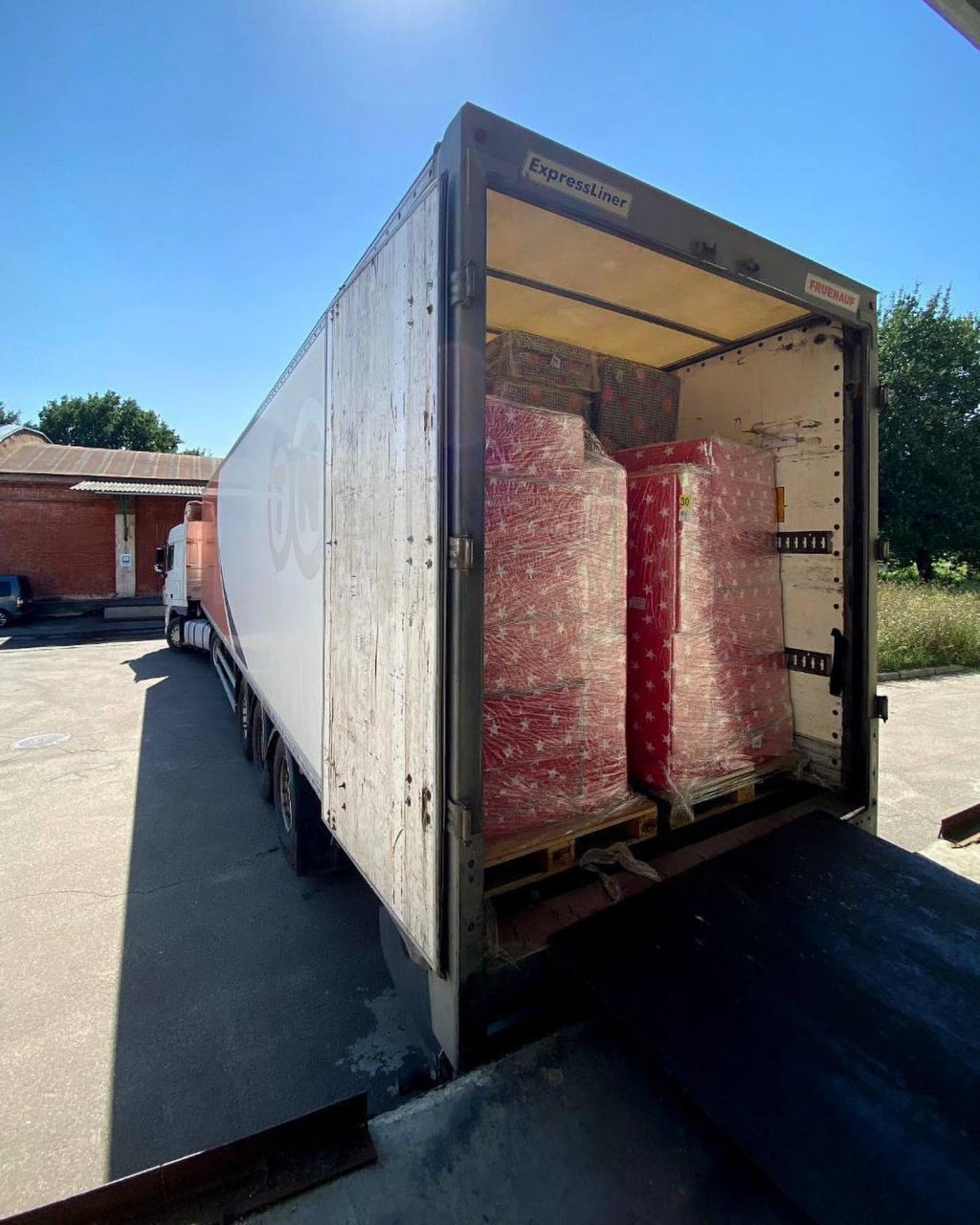 Humanitarian aid from various organizations continues to arrive in the region. Received another batch of medicines. The British organization The MENTOR Initiative handed over 175 thousand dollars worth of medicines. 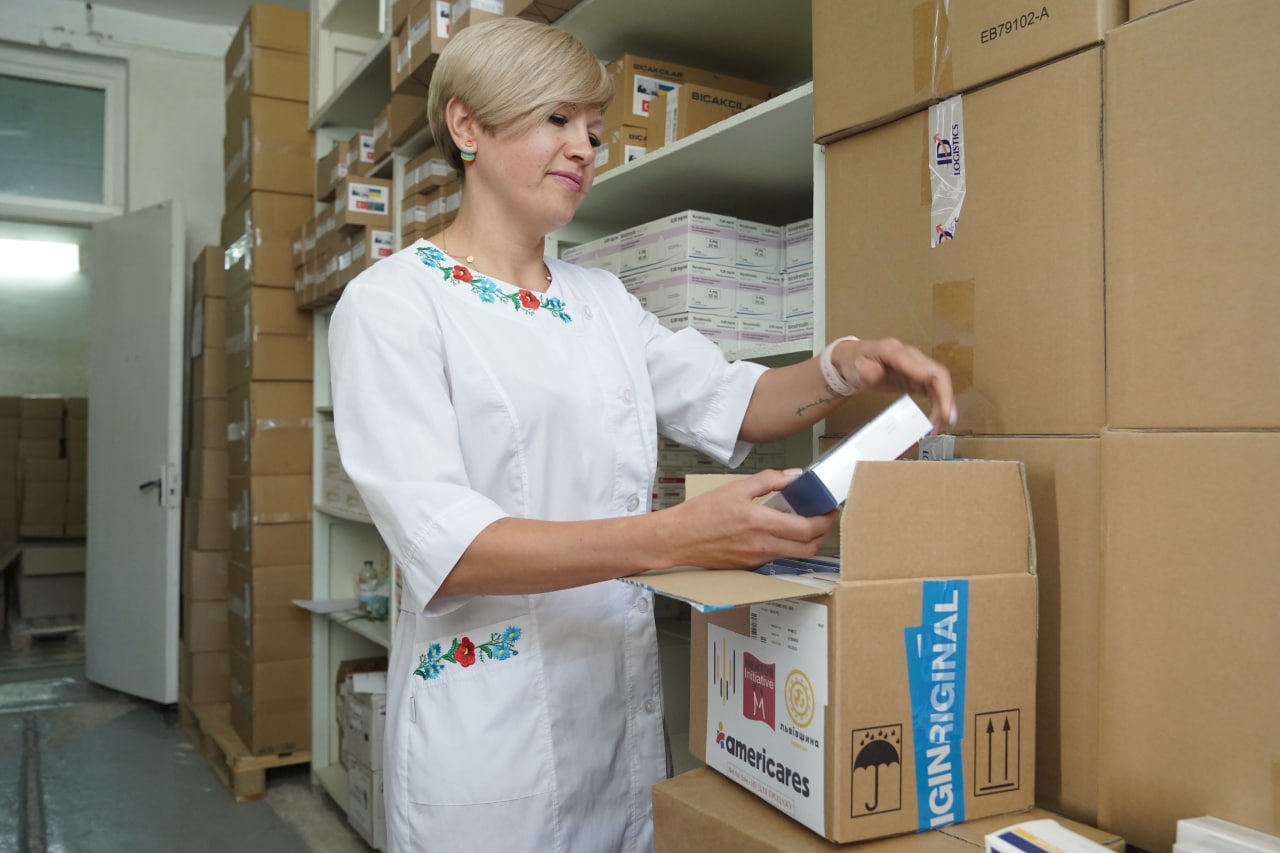 A regional conference of educators was held. A maximally safe environment and minimally stressful training is a joint task with communities. Children should have equal access to education. Educators are real fighters who hold their front.

A russian man who came to the Poltava Region to tell about “Banderas and nationalists” was taken under night house arrest. In the Novoorzhitskyi Lubensky District, he was convincing that “Putin will come – it will be better”, but the people “surrendered” him to the Security Service of Ukraine.