Operational information from the regions of the Active Community network. January 14, 2023 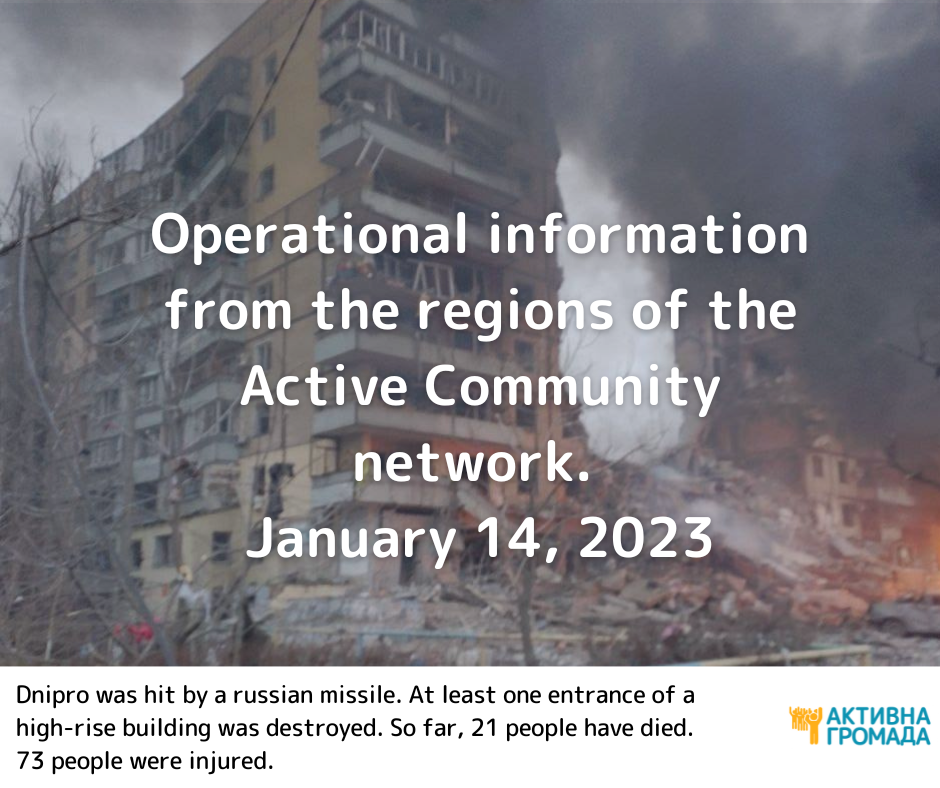 Today, as a result of an enemy attack, fragments of a rocket fell on a non-residential area in the Holosiivskiy district of the capital. There are no casualties.

In the Darnytskyi district, a car was damaged by a fragment of a rocket.

Debris of the downed rocket fell on the territory of the Pirogovo Museum. No one was hurt. All services promptly arrived at the scene. 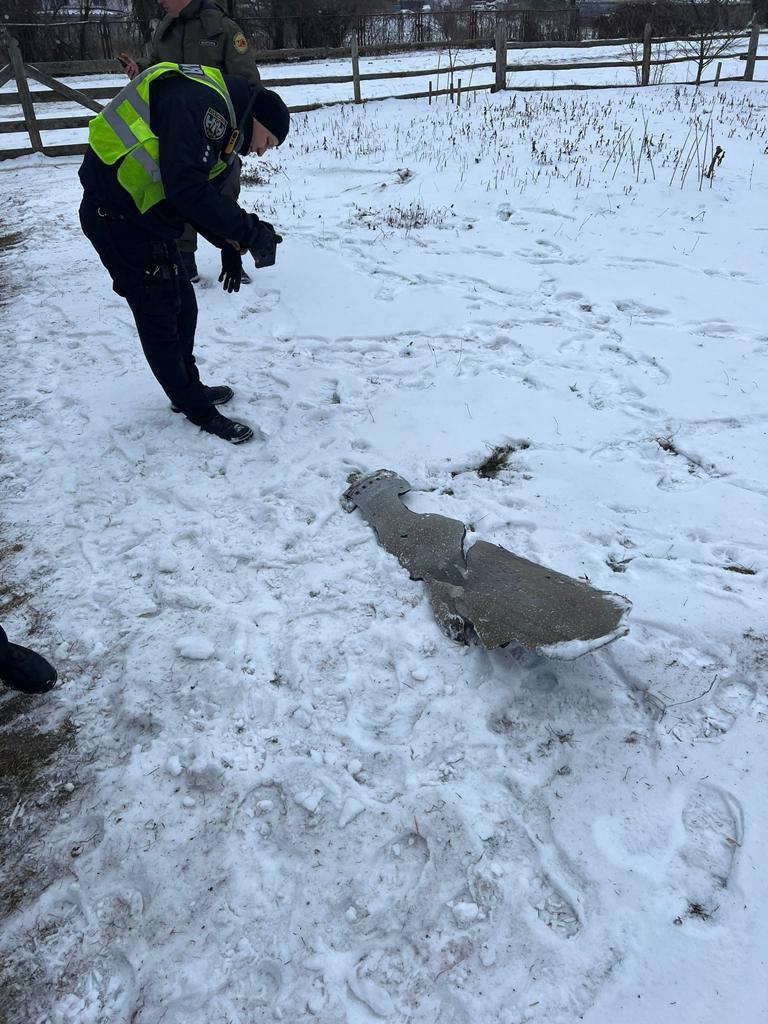 Today, Kyiv received 10 more modern city buses from Latvian partners. A few days ago, on the 10th of January, they left Riga and arrived in Kyiv this morning. Also in the buses – humanitarian aid collected by citizens of Latvia for Ukrainians – generators, blankets, food products.

Around 6 a.m., explosions were heard. A fire broke out at one of the critical infrastructure facilities. As a result of the enemy attack, 18 private houses were damaged. Damaged roofs and windows.

In the village of Kopiliv, during the morning attack, a residential building was hit. Windows were broken in residents’ houses.

As part of cooperation with the Ukrainian platform UNITED24, the head of the American international company UBER, Darya Khosrovshahi, visited Irpin.

Almost 400 residential buildings were damaged by the russians in Zhytomyr. To date, about a hundred of them have been restored – these are buildings with minor damage. Residents of 25 completely destroyed neighborhoods are waiting for compensation for destroyed housing.

A legal guide for immigrants was presented in Zhytomyr. The compilation includes extensive information on services and mechanisms for providing assistance in quarantine and martial law. This includes the issue of assigning social benefits, provision of public services, provision of special statuses, children’s rights, payments to pensioners, issues of housing and others.

Yesterday, the russians carried out 55 strikes on the border settlements of Sumy Oblast.

The russians shelled the Esman community with mortars and the “Hrad” rocket salvo fire system. The house and several yards of the residents were damaged.

The Bilopillya community was shelled with mortars. In the village of Pavlivka, a school, a private house and power lines were damaged.

The russian military launched a missile attack from a helicopter in the Krasnopil community. And later, they dropped three explosive devices from drones.

This morning, the enemy launched a rocket attack on Kharkiv. 2 “arrivals” of S-300 missiles in the Industrial district have been previously recorded. Emergency services are on site. The extent of the destruction and the number of victims is being clarified.

Last day, the occupiers continued to shell the civilian population of the border towns and villages of the Kupyansk, Chuguyiv and Kharkiv raion of the Oblast. Kupyansk, Vovchansk, Dvorichna, Hryanikyvka, Strelecha, Ohirtseve and other settlements were under enemy fire.

Private houses were damaged as a result of shelling from an anti-aircraft missile system in the village of Dvorichna in the Kupyansk raion. 2 women died, another was injured and was hospitalized in a moderate condition.

In addition, a 29-year-old man and a 49-year-old woman were wounded in the Kupyansk district due to shelling. Doctors assess their condition as moderate.

Demining works are ongoing in the Oblast. 75 explosive objects were neutralized during the day.

On January 13 russians killed 1 civilian in Donetsk oblast – in Bakhmut.

Another 3 people were wounded in Donetsk Oblast.

Since February 24 russians have killed 1300 civilians in Donetsk oblast and wounded 2845 more. The number of casualties in Mariupol and Volnovakha is currently unknown.

In the east of Pokrovsk raion 2 people were wounded in Kurakhove. Six multi-storey buildings and 17 private houses were damaged in the town, and one of the shells hit the territory of a utility company. photo –

In Avdiivka during the night there were sporadic hits in the old and central parts of the city, and in the morning there was a massive shelling of the old city.

The Pokrovsk community is becoming more energy independent. Two two-kilowatt gasoline generators were received from the GEM Foundation, which was delivered by representatives of the NGO “Quality of Life”. The received equipment will be transferred for the autonomous work of social workers and for the needs of the municipal enterprise “Municipal Law Enforcement Service” for the uninterrupted operation of video surveillance systems.

Four schools in Pokrovsk received bulbs of tulips and primroses from the Netherlands. They were provided by the Charitable Educational Project “Flowers4school” and the Association of Flower Growers of the Netherlands and Ukraine.

Over 200 attacks on Ukrainian positions were registered in Bakhmut’s direction over the last day. Russians are unable to break through the Ukrainian defense and keep losing people in the assaults.

A building of an enterprise in Kostiantynivka was damaged in the Horlivka’s direction. The situation in the Soledar community is tense – Soledar, Rozdolivka, and Paraskoviivka are under fire. No information on casualties was received.

In the Volnovakha’s direction, Vuhledar, Novoukrayinka, and Bohoyavlenka came under fire, there were no casualties.

According to witnesses, russian occupants are looting local enterprises. Thus, a budget-forming enterprise was operating in the Olhyne community. Today, the quarries are flooded with water. Furniture and equipment were marked by the russian military and taken away in early January. The official version is that the enterprise was relocated to Donetsk.

Some houses in Volnovakha are supplied with gas, water, and electricity. Prices for food, according to local residents, are very high. The city is in ruins, looting is rampant.

If the russian military detains a local during curfew, they are taken to the commandant’s office for the whole night. The next day she is assigned to community service.

In the Lysychansk’s direction, Siversk, Torske and Zarichne of the Lyman community were shelled. The extent of destruction is being established.

Due to prolonged power outages, there are interruptions in water and heat supply.

According to the dispatcher of the “Kramatorskteploenergo” LLC, the heat and power plant has stopped working. More than 400 apartment buildings may be left without heating.

The build-up of the enemy’s presence in the Black Sea continues. Another surface missile carrier was spotted on combat duty. The total number of “Calibers” aimed at Ukraine is 36 missiles.

In the morning, the russian military attacked Zaporizhzhia again with S-300 missiles, this time from a new location near Enerhodar. One of the industrial enterprises was destroyed. In total, over the past day, the enemy fired more than 90 times at 18 communities on the front line using artillery, missiles, and aviation. The use of incendiary munitions was recorded. Fortunately, none of the residents were injured.

The heroic town of Orikhiv is under constant shelling.

In the temporarily occupied Melitopol, russians removed the monument to Ukrainian writer Taras Shevchenko at night.

“Enerhoatom reports that the occupants changed the legal address of Zaporizhzhia NPP, subordinating the station to moscow in a fake way.

In the morning, the enemy attacked Ochakiv and the Ochakiv community with anti-aircraft guns. As a result, the windows in the high-rise building were damaged, and the garage and two cars caught fire. As a result of rocket hits, a fire broke out at one of the civil infrastructure facilities. According to preliminary information, there are no victims. The information is being clarified.

Also, in the morning, as a result of enemy shelling, a residential building was damaged in the settlement of Kutsurub community. Previously, there were no casualties.

Representatives of the new Danish government arrived in Mykolaiv. Danish Minister for International Development Dan Jorgensen personally came to see the destruction of the city as a result of shelling by russian troops. Dan Jorgensen highlighted the main directions of Denmark’s aid to Mykolaiv.

Yesterday, the russian army shelled the Mylove community of Beryslav raion. It hit the school, there was a fire. 84 square meters burned. 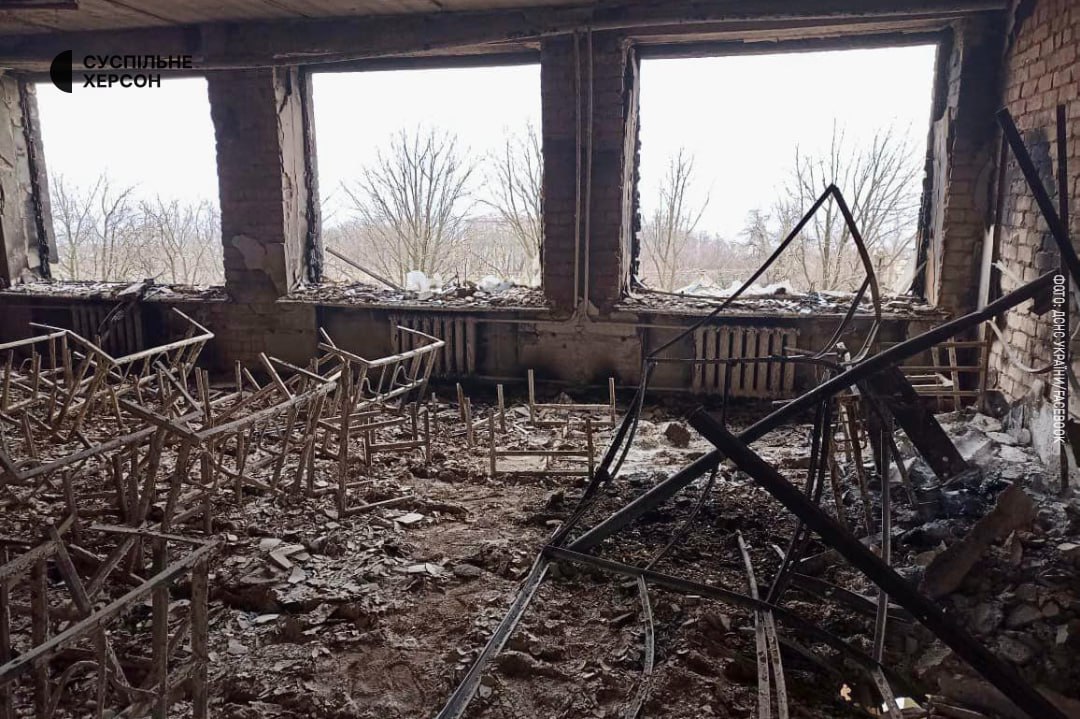 Yesterday, 42 people were evacuated from the Kherson Oblast, including two children. In particular, 18 people left for Khmelnytskyi by train.

In the temporarily occupied cities of the Kherson Oblast, activists of the civil movement «Zhovta strichka [Yellow Ribbon]» continue to oppose the russian occupation. Currently, an educational campaign is being held on how to avoid being forced to obtain a russian passport in Genichesk. 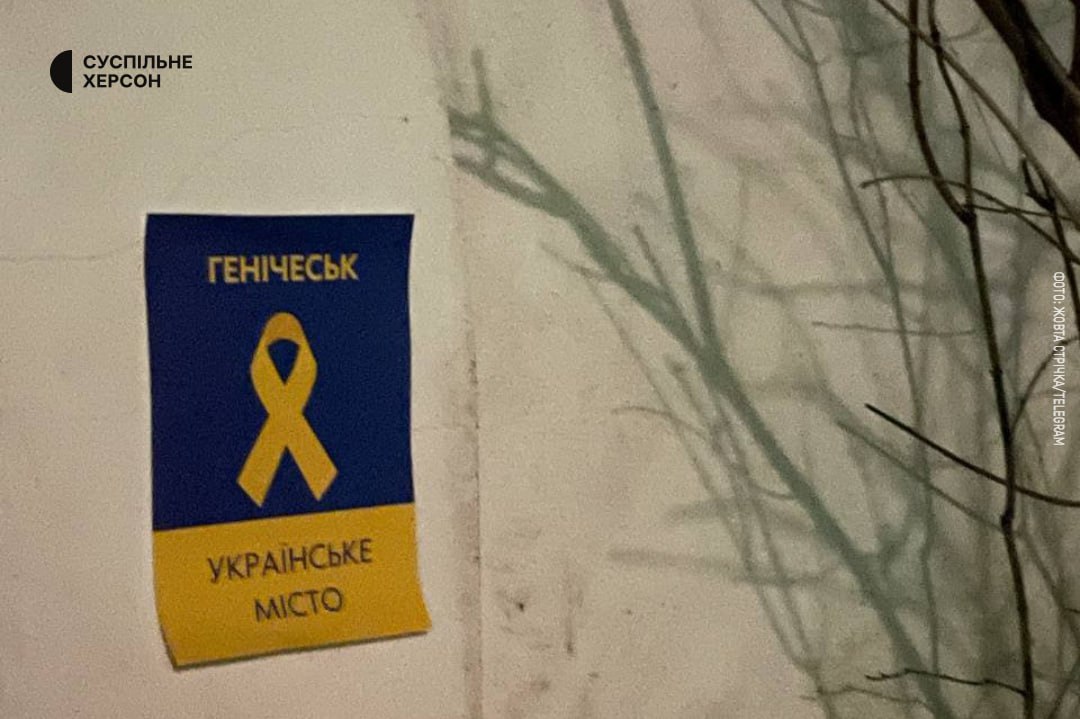 Dnipro was hit by a missile. At least one entrance of a high-rise building was destroyed.

As of 18:00, it was known about 21 dead. 73 people were injured, including six children. All were hospitalized. 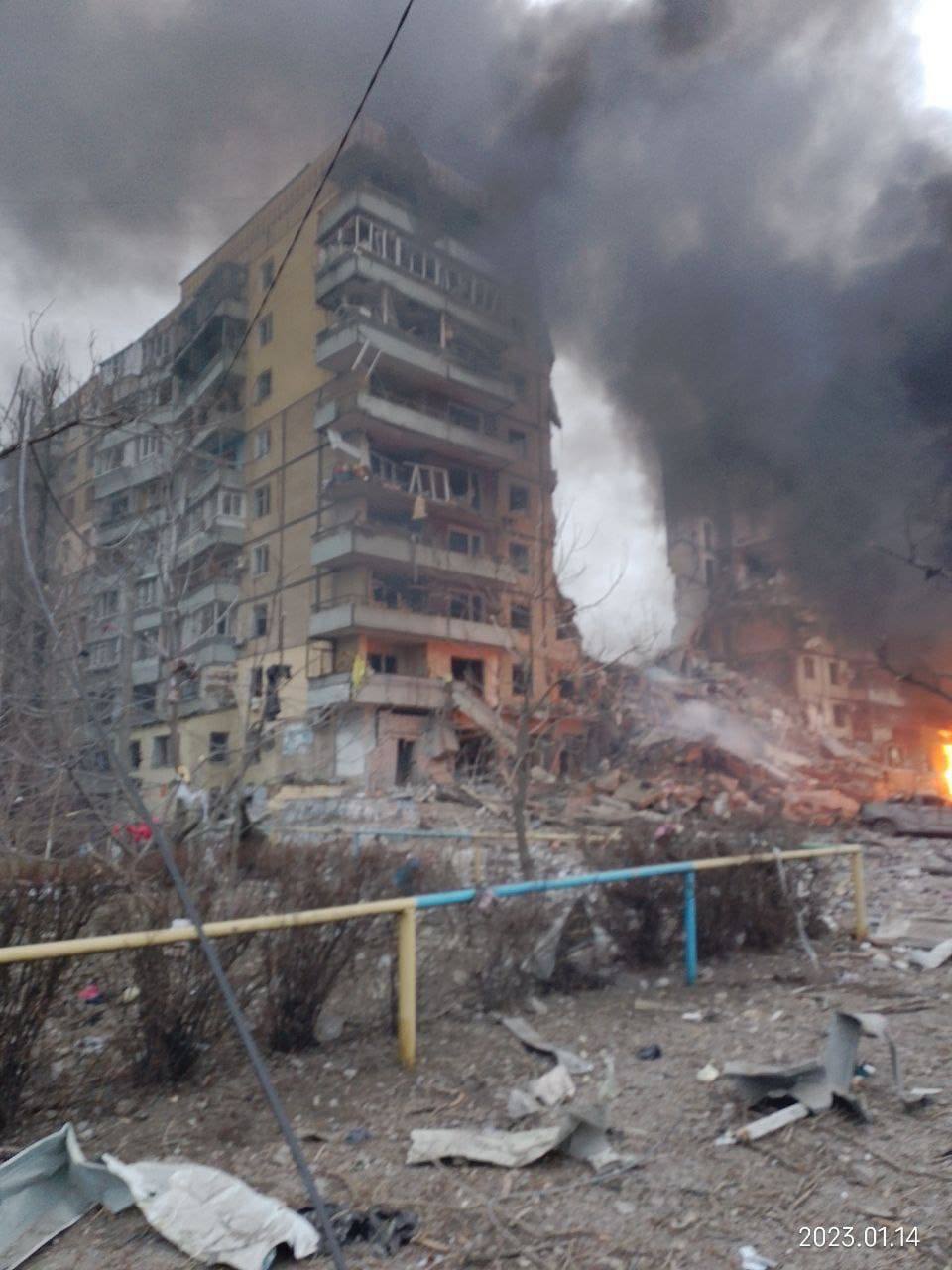 Today, January 14, on the Alley of Honorable Military Burials of the Far Eastern Cemetery, the residents of Kropyvnytskyi carried out the last journey of junior sergeant Hryhoriy Bezai. Eternal memory to our defenders.

Two soldiers from the Poltava Oblast died while performing combat missions in the area of ​​the village of Rozdolivka in the Bakhmut raion. Volodymyr Losyna and Oleksandr Chichynyov died on January 12. Both soldiers were 42 years old. Bright memory to the Defenders.

Another batch of humanitarian aid arrived in the Oblast. 28 tons of flour, 3.5 tons of rice, 2.3 tons of oatmeal and 4.3 thousand liters of oil. The products will be handed over to Oblast healthcare institutions. In particular, the Sklifosovsky and Maltsev hospitals, the regional anti-tuberculosis dispensary and the infectious disease hospital.

A modern infectious disease department will soon be opened in Myrhorod Intensive Care Hospital. The renovation of the two-story building is almost completed. The wards are equipped with oxygen supply, each has a separate bathroom. During the past year, the hospital was replenished with high-precision equipment, including diagnostic equipment. The medical facility is equipped with autonomous heating, a powerful generator, and there is a supply of fuel and water. In addition, a shelter is equipped in the basement of one of the buildings.

The russian military fired on an energy infrastructure facility in Ivano-Frankivsk Oblast. According to preliminary information, there were no injuries or deaths.

In Khmelnytskyi Oblast, 348 settlements were cut off due to weather conditions. Most of the damage to electrical networks was in Horodok, Derazhnya, Dunayivtsi, Yarmolyntsi, Volochysk, Starokostyantyniv, Stara Syniava raions and in the Khmelnytskyi territorial community.

In Rivne, on January 14, they said goodbye to 30-year-old senior soldier Ivan Klimchuk on Independence Square. The man died on December 19 near Bakhmut, in Donetsk Oblast, during enemy assaults.

In the Rivne Oblast, schoolchildren gave the collected money to the Armed Forces. The eleventh-graders of the Smordviv Lyceum traditionally gather at the nativity scene for Christmas, sing and congratulate the villagers, and the collected money is later used to celebrate the graduation evening. This year they decided to do it differently. As a result, it was possible to collect more than 15 thousand hryvnias.

Zakarpattia volunteers are raffling off a t-shirt with the signature of General Valery Zaluzhny. 500 tickets worth 100 hryvnias each will be raffled off. The money earned will be used for the needs of the Armed Forces.

Free educational tours for children in the «Aquarium» exotarium are organized by the «Happy Children» public organization. With the support of partners, it is possible to attract forced migrants and local children. Workshops on various topics are held for children, as well as meetings with a psychologist. Activities will continue for three months.