Operational information from the regions of the Active Community network September 2, 2022

Today, the Minister of Foreign Affairs of Denmark, Jeppe Kofod, visited Kyiv. Denmark agreed to participate in the restoration of infrastructure facilities in the Mykolaiv Oblast. 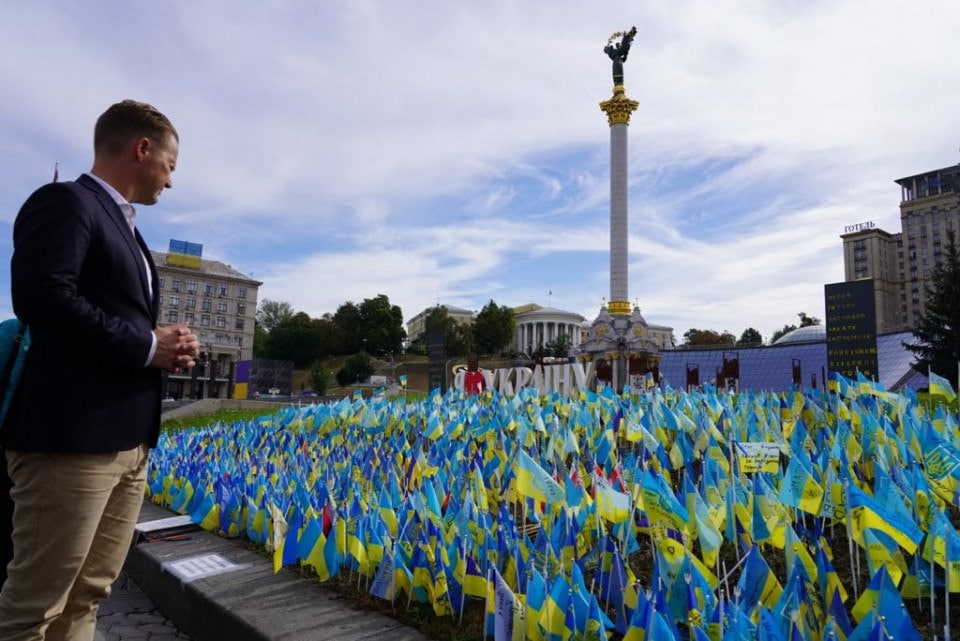 A bust of Pushkin was demolished in the Kyiv Pushkin Gymnasium.

Kyiv residents handed in 48,000 books in russian for waste paper. The municipal bookstore “Syaivo knyhy” continues to collect publications for recycling in order to purchase a motor vehicle for the military.

The Minister of Foreign Affairs of Denmark, Jeppe Kofod, and the President of the Inter-Parliamentary Union, Duarte Pacheco, visited the Bucha Raion yesterday. The President visited the de-occupied territories: Makariv, Andriivka, Borodianka, and Irpin. In Irpin, the high-ranking official visited the House of Culture destroyed by the invaders and the “graveyard” of civilian cars, which were shot at by the russian army during the evacuation of the civilian population.

During the visit, the distinguished guests were also shown the Antonov airfield and the AN-225 Mriya aircraft destroyed by the russian army. There was also a presentation of special equipment that Ukraine received from the Government of Denmark for the needs of the State Emergency Service. 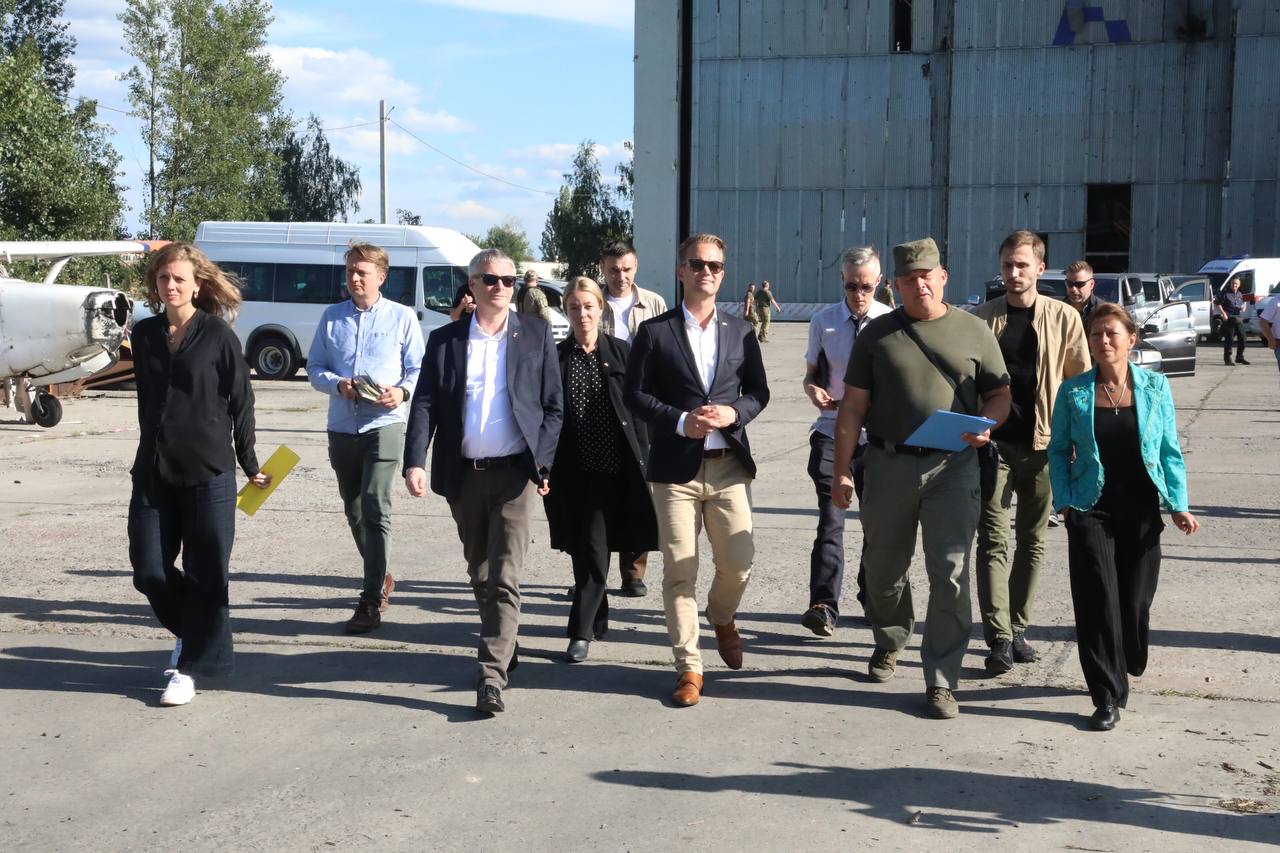 Volodymyr Nitychuk, who was killed in action in eastern Ukraine, was escorted on his final journey in Irpin today.

Also today, in Irpin, they said goodbye to Nazariy Drashpul, who died from shrapnel wounds near Pavlivka, Donetsk Oblast, covering his four brothers-in-arms with his body.

Oleksandr Grebinets, a Hero from Novohrad-Volynskyi, was killed at the front. Eternal rest in peace and glory to the warrior who gave his life for the independence of Ukraine! Sincere condolences to his family and friends!

During the next exchange, 14 defenders returned from captivity, among them fighters of the 30th brigade. 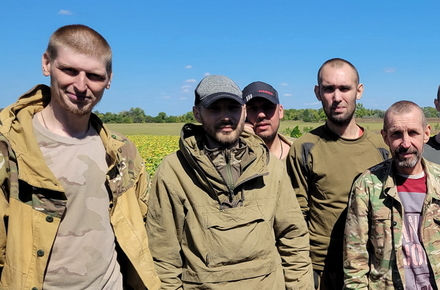 The coordinator of the AUI “Active Community” communicated with internally displaced persons on the matters of humanitarian and psychological assistance.

The russians shelled the Novhorod-Siversk community with tube artillery on September 1. Shelling continued from 9 to 10 in the morning. As a result, the building of the local medical center was damaged by projectile fragments. Border guards recorded 22 explosions resulting from the shelling carried out from the russian village of Sluchovsk.

In Chernihiv, they began to restore a house on Remisnycha Street, which was shelled by the russians at the end of February. Ceilings will be repaired and damaged window units will be replaced.

Today, near Shestovytsia, the State Emergency Service carried out demining.

During the preparation of a story about the consequences of shelling in the village of Senkivka, Chernihiv Oblast, explosives were dropped from a drone on the ICTV Facts film crew.

As a result of the shelling of the Krasnopillia community, two cars, a garage and a residential building in the village of Maiske were damaged.

During the day, the russians carried out 7 attacks on five communities of the Sumy Oblast: in addition to the Krasnopillia community, they also shelled the Nova Sloboda, Znob-Novhorodske, Esman, and Kyrykivka communities. More than 100 explosions were recorded.

A forest fire broke out in the Krasnopillia community as a result of the shelling. After 10 a.m., the russians opened fire on the territory of the community with tube artillery and mortars. A total of 35 explosions thundered.

Last night, the occupiers launched missile attacks on the Kholodnohirskyi district in Kharkiv. 2 missiles hit the ground; some cars and premises were damaged, including a sports complex.

In the oblast, the occupiers launched artillery strikes at the Kharkiv, Izium, Bohodukhiv, and Chuhuiv raions. Private houses were damaged, several fires broke out in open-air areas.

During the day, 3 women were hospitalized in the oblast, namely in the Izium Raion. A 63-year-old man was killed as a result of shelling in the Kharkiv Raion.

The swimming pool and the boxing club, which opened in February 2022, were destroyed by russian shelling at the Lokomotiv sports complex in Kharkiv on the night of September 2.

In the Chuhuiv community, russian invaders fired at the premises where the emergency medical aid teams stay, as well as the vehicles parked near the building.

In the Donetsk sector, the enemy is concentrating its main efforts on conducting offensive operations in the Bakhmut and Avdiivka areas. In the Kramatorsk and Novopavlivka sectors, the occupiers are trying to improve their tactical situation, and are firing heavily at Ukrainian troops. Attempts are being made to constrain the actions of units of the Defense Forces of Ukraine and prevent them from being redeployed to other sectors.

In the Kramatorsk sector, the enemy fired mortars, tanks, tube and rocket artillery in the areas of the settlements of Bohorodychne, Hryhorivka, Donetske, Verkhniokamianske, Ivano-Daryivka, Rozdolivka, and Vesele.

The enemy launched an airstrike in the area of the Verkhniokamianske settlement.

In the Avdiivka sector, the enemy carried out shelling from the available types of weapons in the areas of the settlements of Krasnohorivka, Avdiivka, Vesele, Opytne, Vodiane, Tonenke, Pervomaiske, and Karlivka.

Ukrainian defenders successfully repelled the attack of enemy units in the areas of the settlements of Opytne, Pervomaiske, and Nevelske.

The enemy’s assaults, which the russians tried to carry out in the direction of the settlements of Avdiivka and Krasnohorivka, were also repelled.

On September 1, the russians killed 4 civilians of the Donetsk Oblast: 2 in Toretsk, 1 in Velyka Novosilka, and 1 in Avdiivka. Another 10 people were wounded.

Since February 24, the russians have killed 790 civilians of the Donetsk Oblast, and wounded another 2008 people.

298 educational institutions of the Donetsk Oblast started the academic year in the online format.

106 thousand pupils and students “sat down” at virtual desks.

The past day in the Pokrovsk community was relatively calm. No facts were recorded regarding casualties and destruction during the day.

In the Donetsk Oblast, by decree of the President of Ukraine № 620/2022, four more military administrations were created in the Pokrovsk Raion: Pokrovsk, Myrnogradsk, Dobropilsk, and Selydivsk.

Residents of Pokrovsk housing quarter №28 received a generator as a gift for their activity.

Preparation for winter continues: in the Pokrovsk community, firewood is being collected for vulnerable categories of the population.

A resident of Novogrodivka (Pokrovsk Raion) will be tried for spreading content justifying the actions of the occupiers. The investigation established that in March-April, the man actively reposted videos on a social network banned in Ukraine with statements about the alleged non-involvement of the russian army in the bombing of Mariupol, and other content about the “liberation” of civilians from the “Nazis” by the occupiers. An indictment under Part 2 of Article 436-2 of the Criminal Code of Ukraine has already been sent to the court (distribution of materials containing justification, recognition as legitimate and denial of armed aggression of the russian federation against Ukraine).

During the meeting with the IDPs, the coordinator of AUI “Active Community” talked about the legislative acts that were adopted by the Verkhovna Rada of Ukraine in the interests of the internally displaced persons.

In the Bakhmut direction, the enemy fired mortars, tanks, barrel and jet artillery at the areas of the settlements of Sukha Balka, Yuryivka, Bakhmutske, Mayorsk, Zaytseve, Soledar, Bakhmut, Yakovlivka, Bilogorivka.

The russians carried out airstrikes in the areas of Zaitseve, Vesela Dolyna, Soledar, Bakhmut, and Yakovlivka settlements.

Units of the Armed Forces of Ukraine repelled the enemy’s offensive in the direction of the settlements of Bakhmutske and Bakhmut, Vesela Dolyna and Mayorsk.

Yesterday, gauleiter pushylin visited the first-graders accompanied by a bodyguard.

Residents of Mariupol received gifts from the occupiers in the form of diaries with russian symbols.

New photos from the Mariupol Museum of Local History were shown on the network. 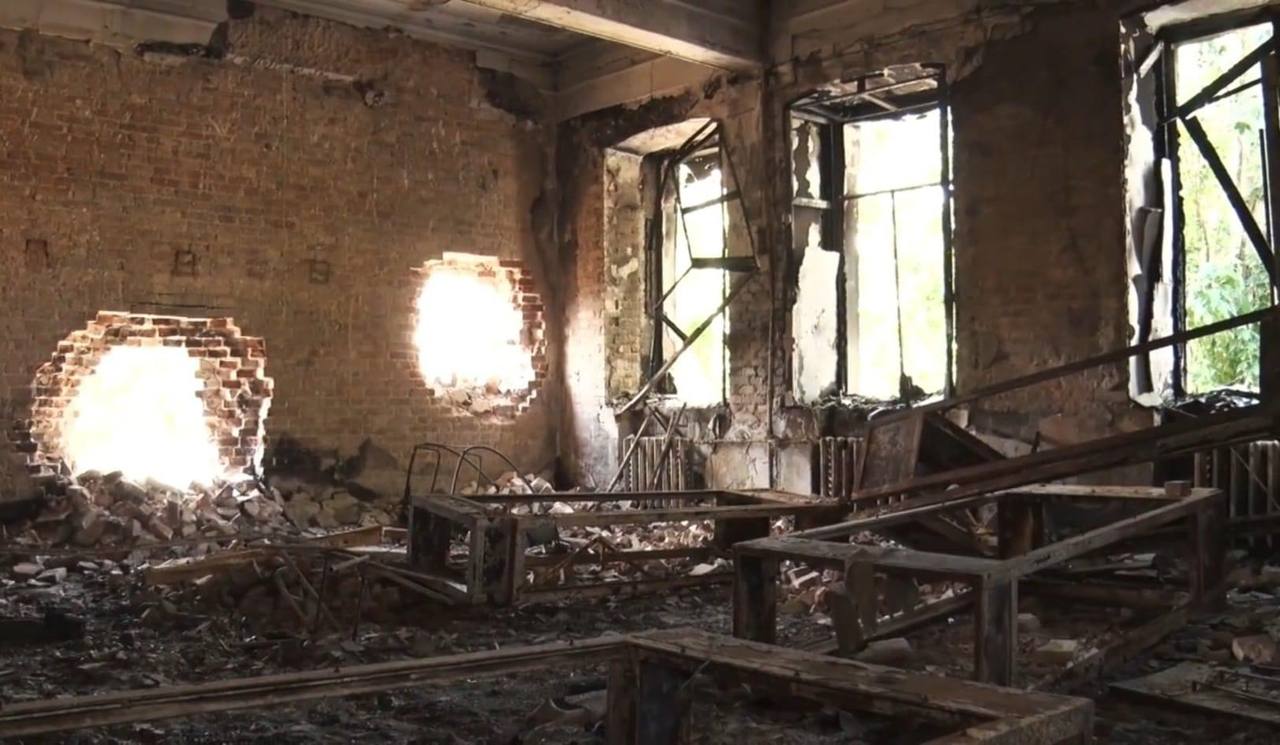 Yesterday, the enemy carried out a bombardment of the Mykolaiv Raion with high-explosive five-hundred-kilogram aerial bombs. One person was injured.

During the past day, the enemy shelled Lyubomyrivka, Ternovi Pody, Tsentralne and Vavylove (Shevchenkove community). Also, at 10:05 p.m., the village of Zelenyi Gai was hit by russian artillery shelling, as a result of which three residential buildings caught fire.

At night at 11:45 p.m., the enemy shelled the village of Novomykolaivka (Pervomaisk community). Commercial buildings were partially destroyed.

At midnight, September 2, enemy shelling took place on the outskirts of the village of Kostyantynivka (Pervomaisk community).