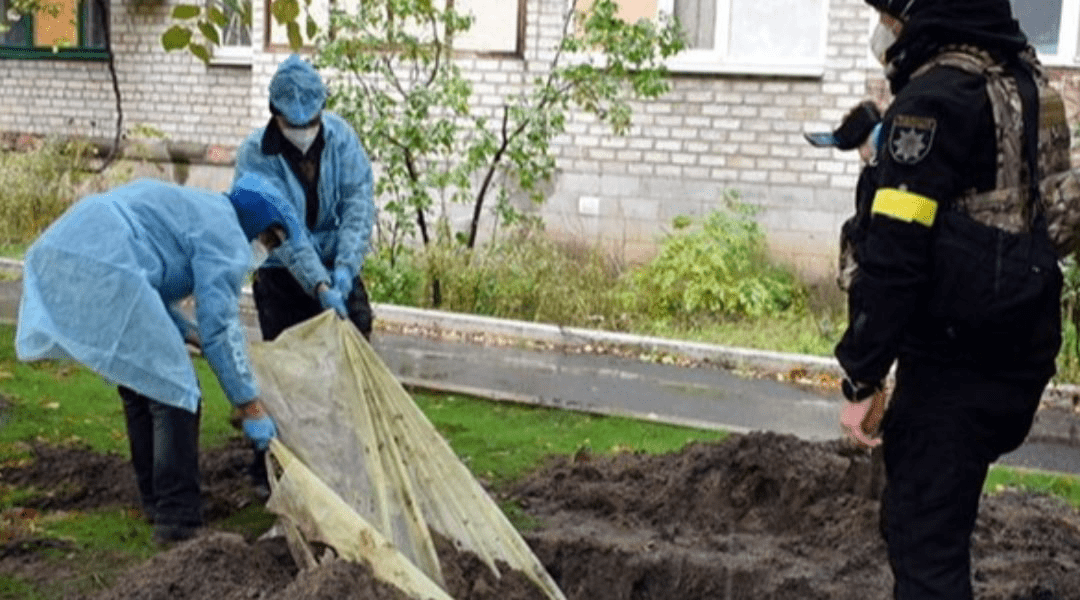 Operational information on the regions of the Active Community network 28.11.2022

The two hundred and seventy-eighth day (278) day of the heroic resistance of the Ukrainian people to a russian military large-scale invasion continues.

The two hundred and seventy-eighth day (278) day of the heroic resistance of the Ukrainian people to a russian military large-scale invasion continues. 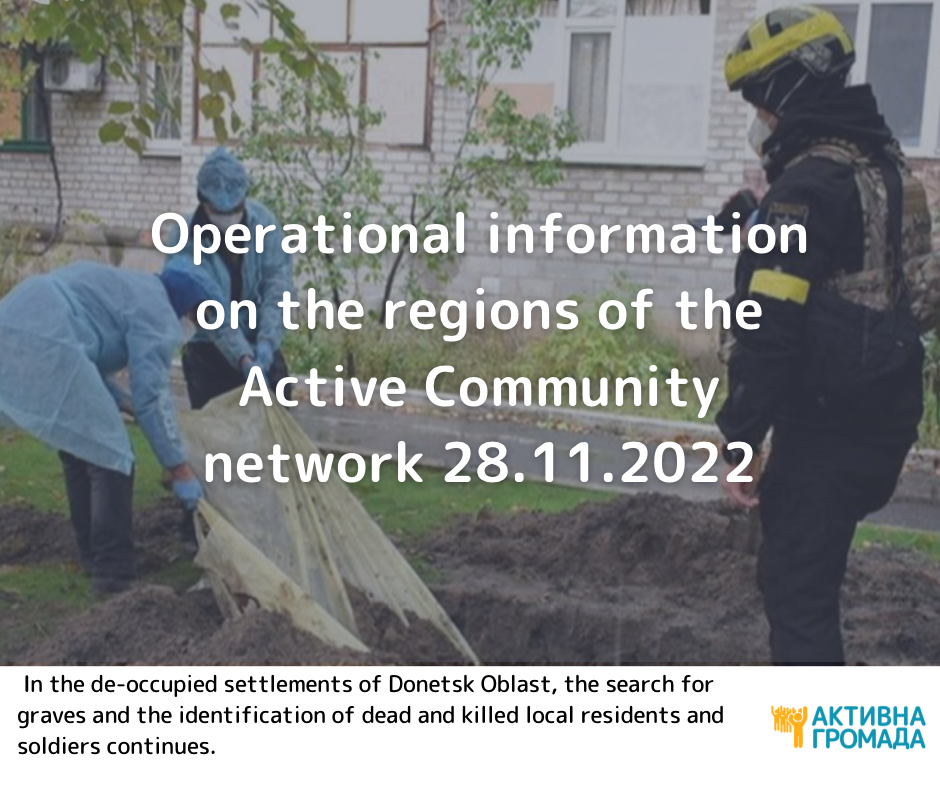 According to the decision of «Ukrenergo», emergency shutdowns of electricity supply continue in the Kyiv Oblast. About 40% of the Oblast is currently without power. These are the consequences of a massive missile strike that happened last week. In addition, due to bad weather and frostbite, line breaks and emergency shutdowns were recorded in the Kyiv Oblast. Energy workers are working non-stop and doing everything to restore electricity and return to planned shutdowns with a schedule.

The heads of foreign affairs of Estonia, Finland, Iceland, Latvia, Lithuania, Norway and Sweden came to Kyiv. On the agenda is the discussion of further support for Ukraine.

The police showed enemy shelling of the capital on November 23 through the eyes of patrolmen, a powerful explosion occurred a few tens of meters from them. They heroically ran straight to its epicenter to help the victims.

A residential building on Mezhova Street in Vynogradar is being restored after being hit by a russian rocket. 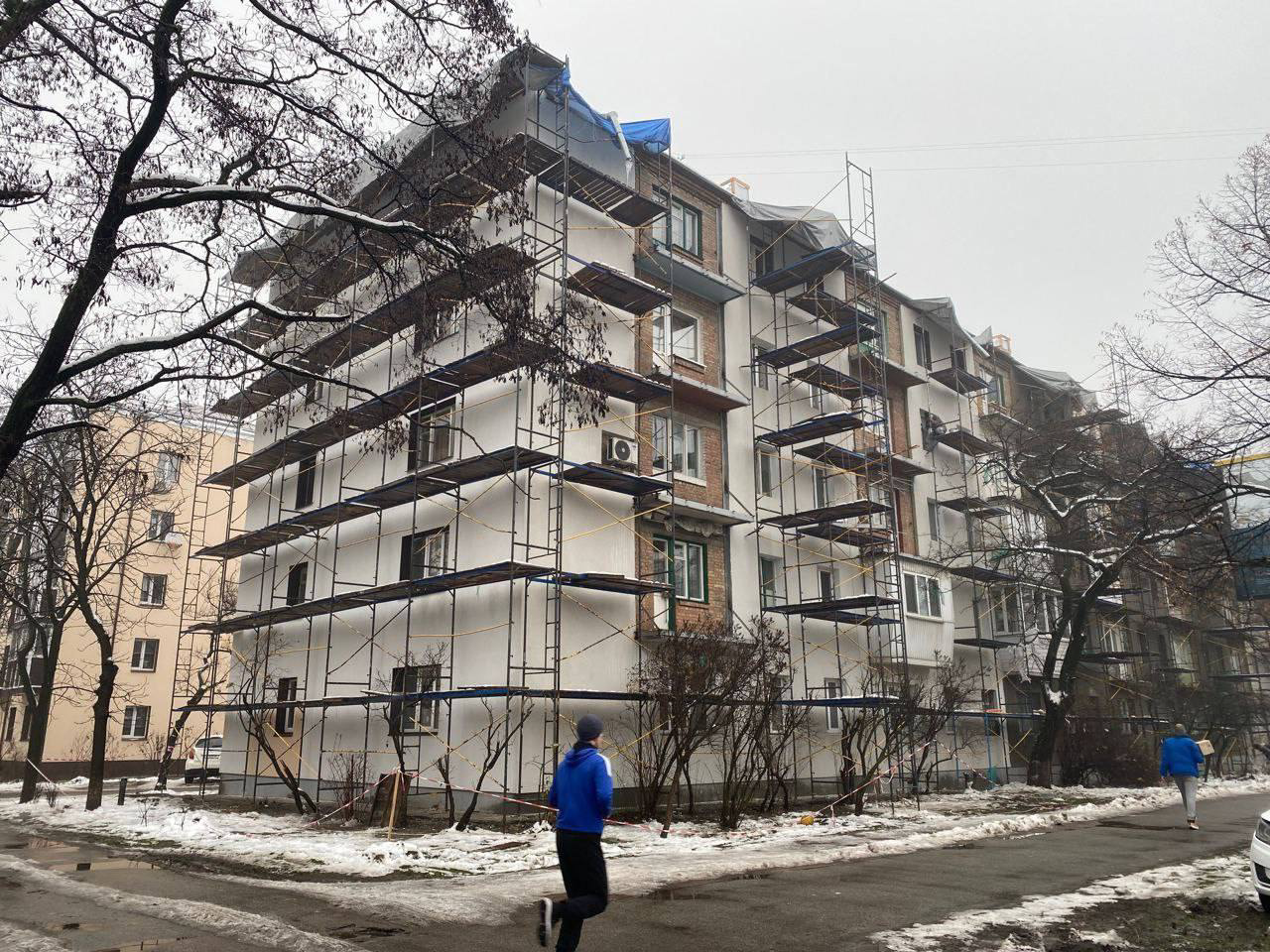 The Prime Minister of the Kingdom of Belgium, Alexander de Croo, visited Kyiv Oblast yesterday. He visited the place of mass burial of people who were killed and tortured by the russians, near the church of St. Andrew the First-Called Apostle in Bucha. They also visited the village of Borodyanka, which was almost completely destroyed after the russian occupation. The Prime Minister of Belgium emphasized that he admires the resilience and will of Ukrainians. 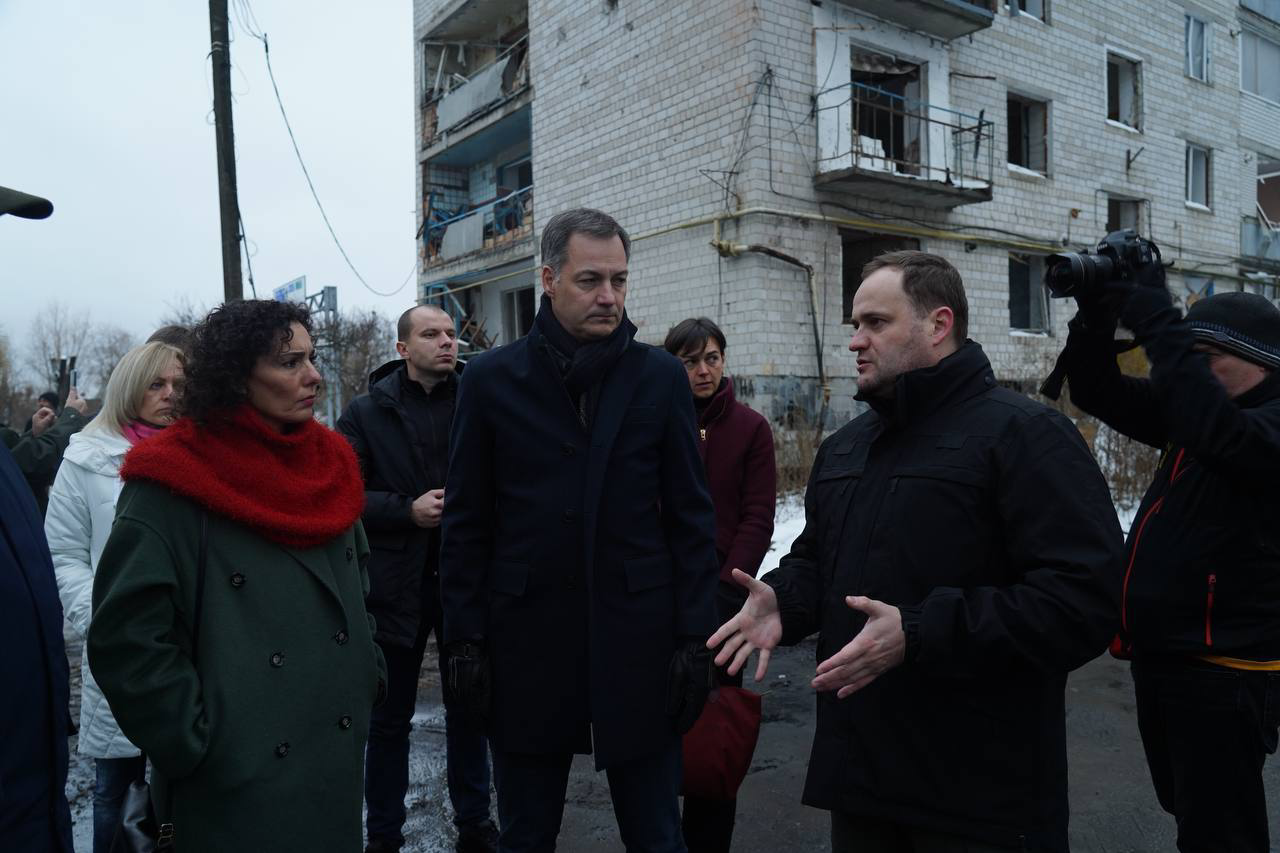 Another wounded woman died in the hospital as a result of a russian missile strike on a high-rise building in Vyshgorod. The number of victims has increased to seven. In total, the number of victims of the attack at that time was 42 people in the Kyiv Oblast. 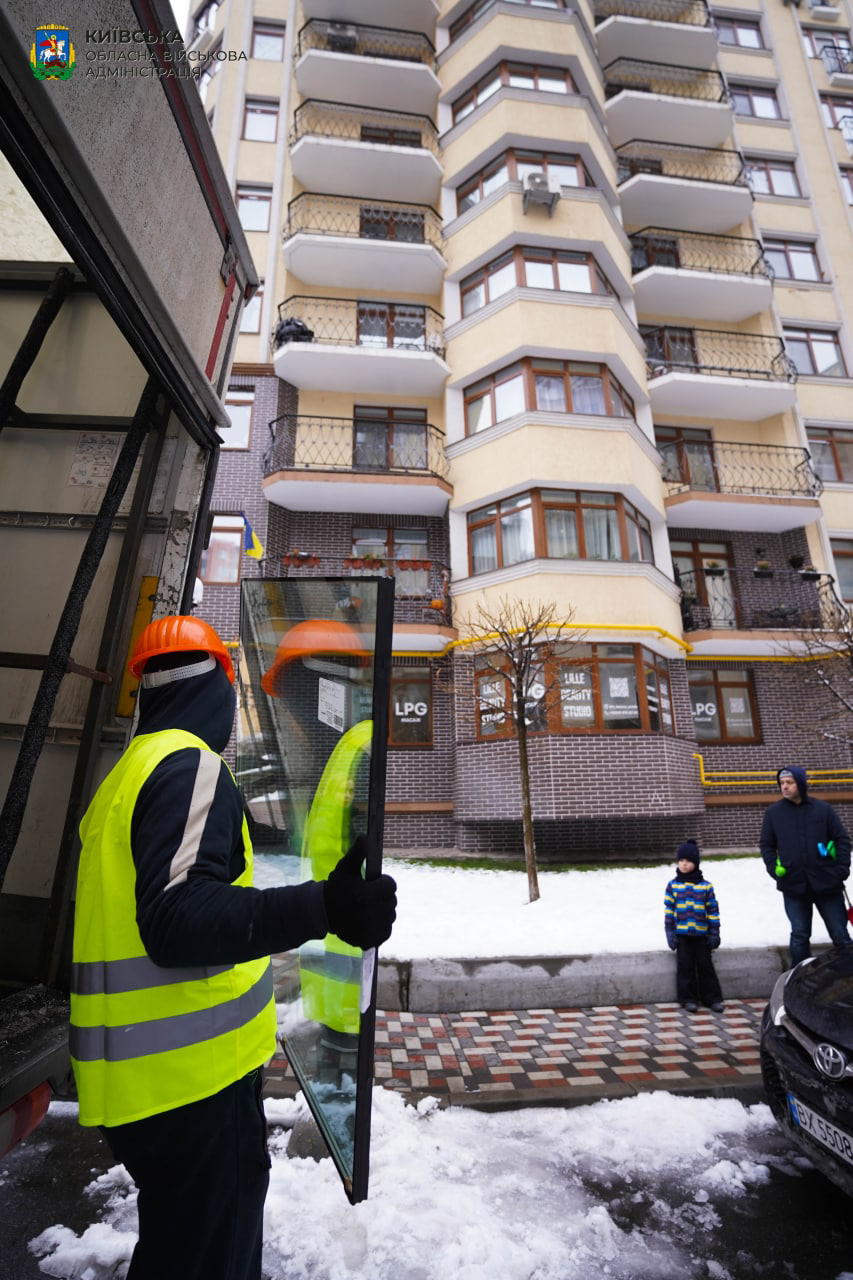 Another 24-hour heating point is being set up in Irpin – it will be located in Mama’s Square in the Synergia microdistrict.

74 wood stoves for cooking and heating were delivered to Irpin from Germany. The next day, they will be handed over to those associations of co-owners of multi-apartment buildings (OSBB) that do not yet have oven-stoves in case of long-term power outages.

Inhabitant of Irpin, whose house was destroyed during the hostilities, made a watch from fragments of russian shells and presented it to the mayor Oleksandr Markushin.

Teenagers from Belgium donated a bus for a school in the Kyiv Oblast. Six teenagers collected 50,000 euros, found a used bus, bought it and gave it to an educational institution in Bohdanivka.

In Zhytomyr, a grenade launcher training was held for civilians. The main goal of the training is to teach people who have never held a weapon in their hands to use anti-tank grenade launchers and destroy enemy equipment.

Police stations and fire departments of the Zhytomyr Oblast are ready to help residents of the Oblast in case of an emergency. In the event of a long-term power outage, police units and the State Emergency Service will work as additional «Punkty nezlamnosti [Points of Invincibility]».

In Zhytomyr, the memory of the soldiers of the UPR army who died in the battle near the village of Bazar in Zhytomyr Oblast was commemorated. The action has been held annually since 2010 at the initiative of the national scout organization «Plast».

Over the past week, the State Emergency Service discovered and seized 237 explosive objects in Chernihiv Oblast.

Over the course of a day, pyrotechnicians of the State Emergency Service destroyed 32 explosive objects in Sumy Oblast. Ammunition was discovered on the territory of Konotop and Okhtyrka raions.

Today, emergency shutdowns were introduced in Oblast in addition to scheduled power outages.

In the Oblast, the russians are constantly attacking the Kupyansk, Chuguyiv and Kharkiv raions with missiles and artillery. There are hits in private households, an educational institution in the Kupyansk raion. At around midnight in the village of Bezmaitezhne, as a result of a missile strike by a S-300 air defense system, an explosive wave damaged the lyceum building. No casualties.

Mine danger in the Oblast remains high. Yesterday, 2 men were injured as a result of an ammunition explosion: a 56-year-old and a 62-year-old man were hospitalized.

The de-occupied areas of Kharkiv Oblast received humanitarian aid from the Elena Zelenska Foundation. With the assistance of the First Lady of Ukraine, liberated communities of 4 raions of the Oblast received means for heating and autonomous power supply of electrical devices.

In particular, benefactors donated: 100 generators with a capacity of 3.5 kilowatts, almost 100 heaters, 100 oven-stoves, mobile chargers, electric sheets, more than 4,000 sleeping bags, etc. The aid is distributed among the communities most affected by the occupation in the Kharkiv, Kupyansk, Izyum and Chuguyiv raions of the Oblast. The leadership of the communities will distribute aid, including to the new “Punkty Nezlamnosti [Points of Invincibility]”.

A fire broke out near an oil depot in temporarily occupied Donetsk. 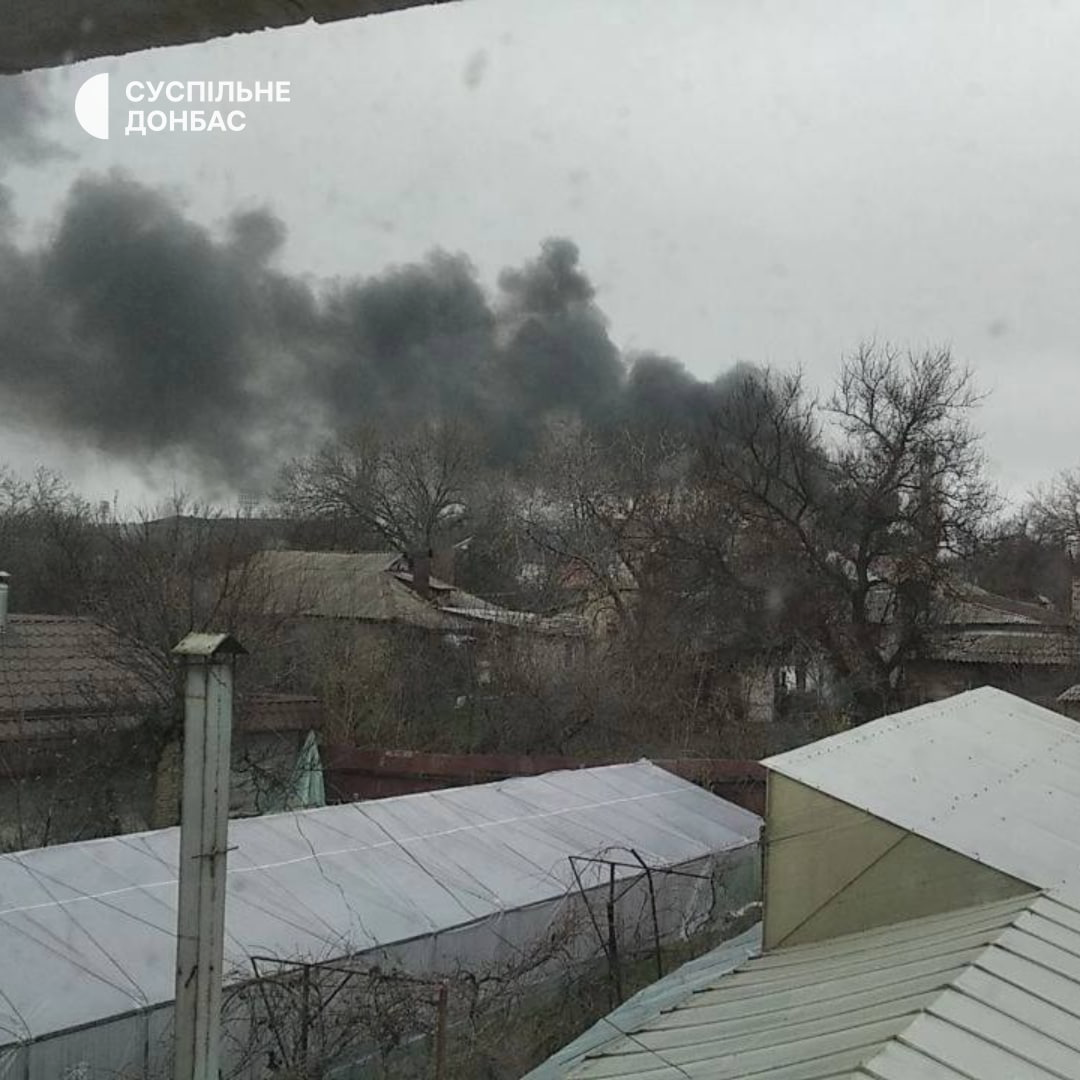 In the de-occupied settlements of Donetsk Oblast, the search for graves and the identification of dead and killed local residents and soldiers continues. As of the 28th of November, law enforcement officers discovered 165 burials. 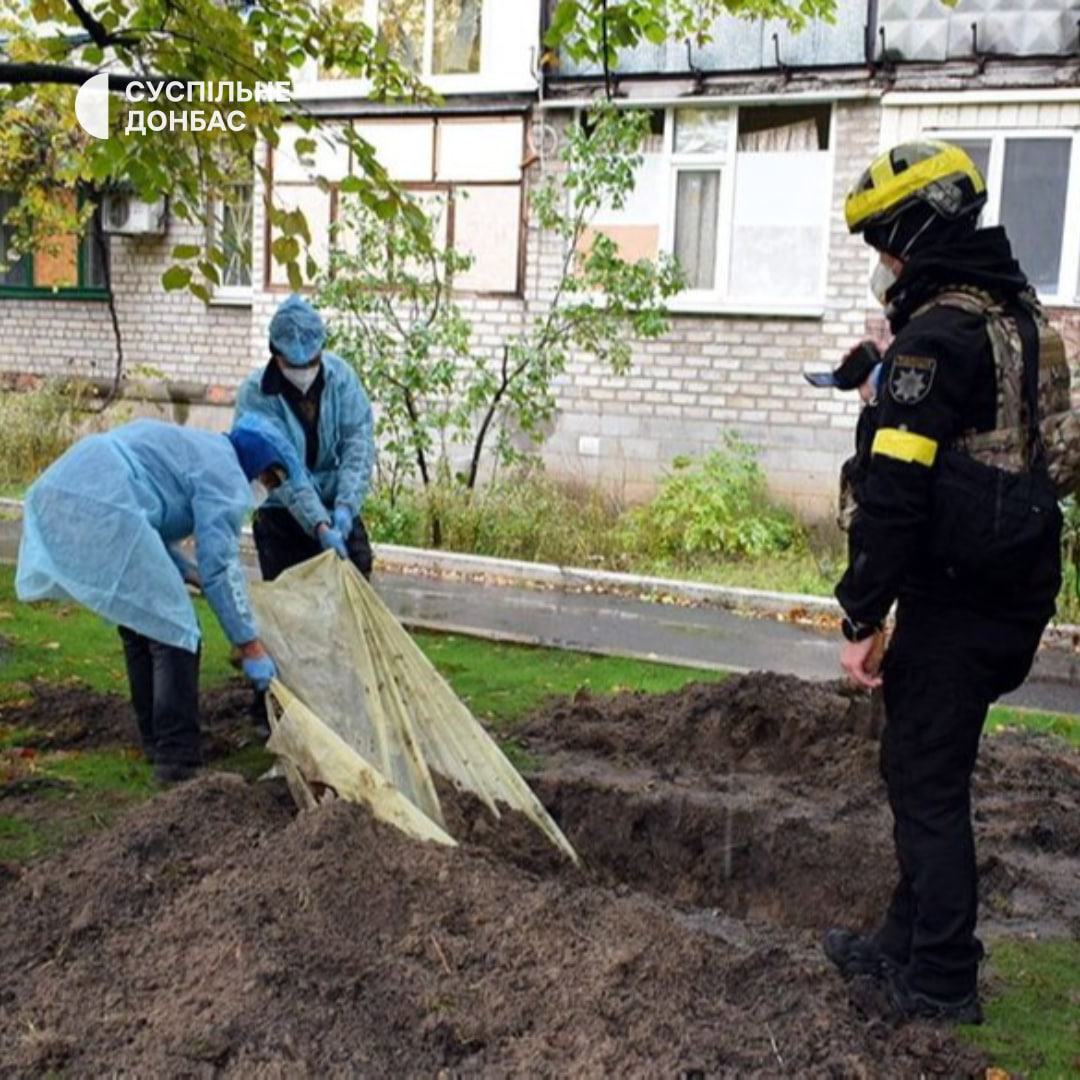 In the Donetsk Oblast, since the beginning of the full-scale invasion, 184 children were killed and 255 were injured by the shelling of the russian army.

Since the 24th February, the russians have killed 1,230 civilians of Donetsk Oblast, wounded another 2,646. The number of victims in Mariupol and Volnovakha is currently unknown.

In the north of the region, massive shelling of Toretsk and Zarichne in the Lyman community continues, and there was also a lot of noise on the outskirts of the Toretsk community – the consequences of the shelling are being established.

In the east of the Pokrovsk raion, the cities of Avdiivka, Krasnohorivka, Kurakhove, the villages of Karlivka, and Maksimilianivka were attacked by the enemy.

The occupying forces of the russia carried out artillery shelling of a residential area in the city of Kurakhove. As a result of the attack of the invaders, 3 people were injured, two of whom died in the hospital. The children’s playground and 4 apartment buildings were also damaged by shells, the windows of which were blown out by the blast wave.

In Pokrovsk, members of the association of people with disabilities received humanitarian aid.

Svitlana Ostrovska, a history teacher of secondary school #9, passed all the selection stages of the competition and in the final among the 12 best teachers of Ukraine, she took 2nd place in the “Fundamentals of Jurisprudence” nomination.

In the central part of the raion, shelling of Vugledar and the vicinity of Vodyanyi was recorded.

The occupiers began to destroy the historical center of Mariupol. A square of almost 5.5 kilometers along the perimeter was completely destroyed. They have already erased 1,356 high-rise buildings from the city map. Now they plan to demolish another 914 houses.

A photo of the courtyard of Mariupol school #41 appeared on the Internet. The occupiers simply threw textbooks and books from the library into the street.

Today, russian troops shelled the Kherson community five times. Houses were damaged, fires broke out in some places. And they also hit the power lines that feed the city. One person died.

The patrol police detained a man in Kherson who was allegedly collecting data on shelling of the city and could pass it on to the russian military.

In the Kherson Oblast, a coordination headquarters for evacuation was created. The structure is temporary and is designed to allocate resources more efficiently and help as many people as possible.

The executive committee of the Skadovsk City Council received more than 180 statements about the seizure of housing by russian occupiers. The most such facts were recorded in Skadovsk — 26% of all applications.

Residents of temporarily occupied Henichesk are boycotting the occupation authorities. Activists of the “Yellow Ribbon” movement remind russians that Genichesk is Ukraine.

Yesterday, the enemy struck the water area of ​​the Ochakiv community. There are no casualties.

Also yesterday, the enemy carried out artillery fire on the coastline of the Kutsurub community. There were no injuries or damage.

The availability of base stations of mobile operators in Kirovohrad region exceeds 90% of their total number. This was reported by the State Special Communications Service.

Kirovohrad oblast delivered about 40 tons of cargo to Kherson per day. Building materials, repair tools, everything necessary for electricians are being delivered by brigades and units of the State Emergency Service from Kirovohrad oblast. Food, medicines, hygiene products were also delivered.

Tetyana Nazarenko, director of the Kirovohrad Regional Center for Folk Art, member of the “Active Community” team of Kirovohrad oblast, serves as a combat medic in the Army of the Armed Forces of Ukraine. Now she is fighting for independence on the front line. 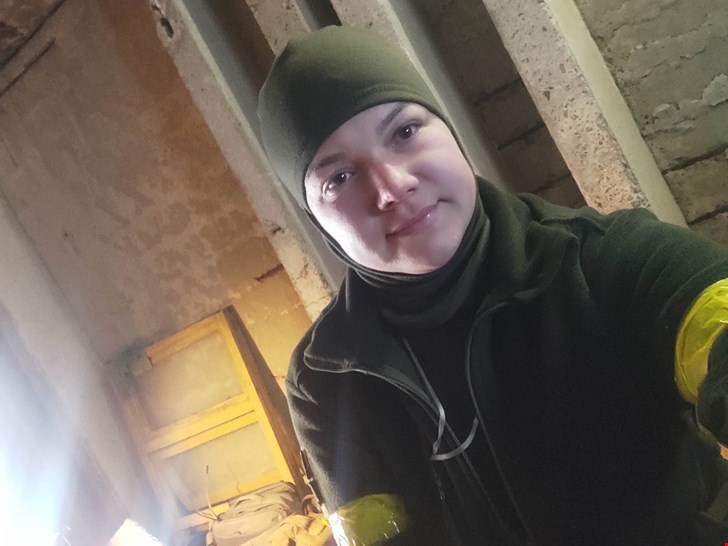 In Khmelnytskyi, they said goodbye to a soldier of the 86th terrorist defense battalion Ruslan Konopelko . In February, he volunteered for the army. The heart of the Hero stopped due to a serious illness at the front line in Kherson oblast. Ruslan Konopelko was 41 years old.

The municipal management companies are preparing for a difficult winter. Thus, they have purchased one hundred and fifty generators for residents of high-rise buildings. The generators are designed to recharge phones and power banks. An algorithm has been developed to determine when and to what locations they will be delivered in case of power outage for more than a day.

In Kamianets, the city budget will reimburse up to 50% of the cost of generators purchased by residents of apartment buildings. Such programs are currently successfully operating in Kyiv and Lviv. The program budget is more than UAH 5 million.

In Kamianets-Podilskyi, there are 8 round-the-clock “Points of invincibility”, 7 of them are already equipped with generators. There are visitors at the points every day.

For the safety of residents and to avoid accidents, street lighting in the city works until 19:00. It is during this period that there are most pedestrians on the street.

Ukrainians in Germany are making trench candles for our military. Those who have been living in the country for several years, as well as immigrants who came from Kyiv, Kharkiv, Kherson and other cities join in. Not indifferent Germans bring boxes and metal cans, they also send materials from Poland. In total, almost 200 trench candles have already been made. 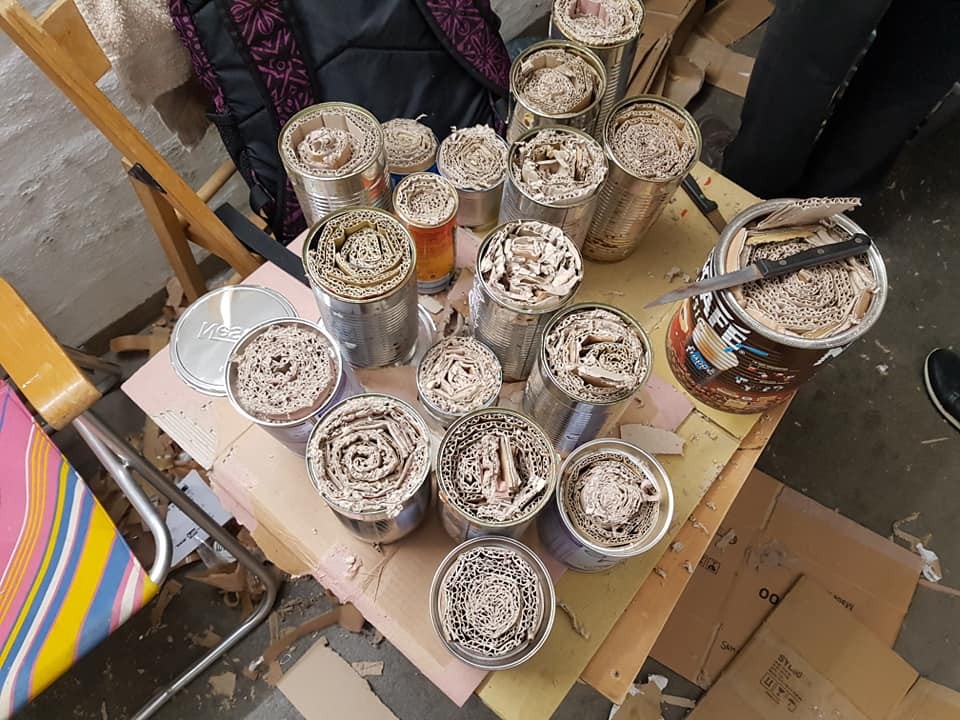 The library in Rivne delivered children’s books to the liberated inhabited localties of Kharkiv oblast. The readers of the regional library for children, local writers and one of the local publishing houses joined the initiative to collect Ukrainian books. In total, 350 Ukrainian-language books were collected. This initiative was launched by the Kharkiv Literary Museum as part of the After the Occupation project. It was supported in different parts of the country, including Rivne oblast.

The rehabilitation and strengthening in the “Power of the Carpathians” was organized for IDP families in Zakarpattia. This project was implemented by the NGO “Happy Children”. During 4 shifts, 119 people were rehabilitated. These are 45 women and their children who left their homes because of the war. Most of them have husbands defending Ukraine at the front line. Additional 5 families from the de-occupied territories of Chernihiv oblast were added to the fourth shift.

Today the 19th Travelling International Human Rights Documentary Film Festival Docudays UA started in Zakarpattia. It began in Lviv and will visit 22 oblasts of Ukraine. And for the first time – abroad. The theme of this year’s Travelling Docudays UA is “State of Emergency”.

Another charity match called “Football for Victory” took place at Uzhhorod’s stadium “Avangard”, with the help of which the stars of show business and the main sport in the country and the world raised funds for the needs of the Armed Forces of Ukraine.

Last modified: 29 Листопада, 2022
← Previous Story: UKRAINE: War should not take away a child’s holiday!
→ Next Story: Operational information on the regions of the Active Community network 30.11.2022