The light machine gunner, who shot down a missile over Kyiv on December 16, received the “Steel Cross”. On behalf of the Commander-in-Chief of the Armed Forces of Ukraine Valeriy Zaluzhnyi, Kyiv Mayor Vitaliy Klitschko personally presented the honorary badge to 25-year-old Oleh Vasylyshyn. 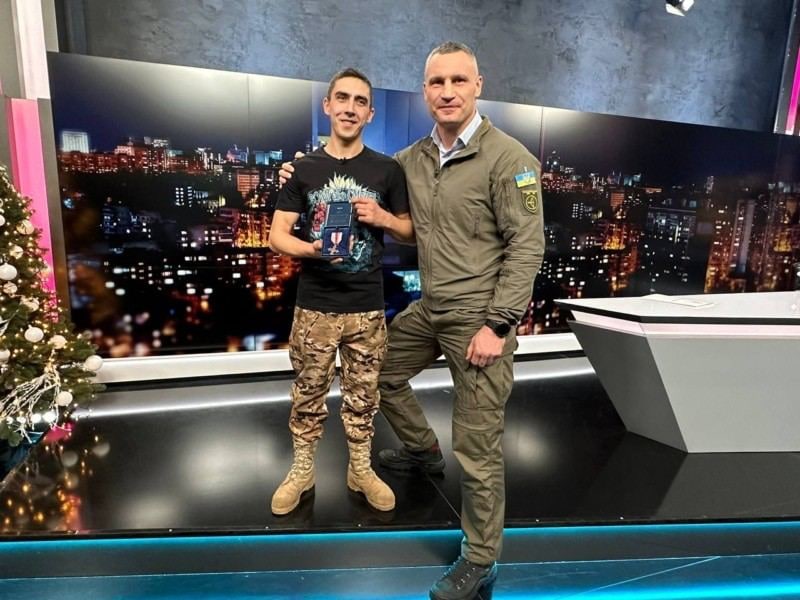 The most difficult situation in the power grid of the country remains in Kyiv and the oblast.

Rescuers teach children safety rules in the Solomianskyi district. The State Emergency Service employees explained to the little Kyiv residents the rules of fire safety to be observed at home and during the educational process, what they must do in case of detection of suspicious and/or explosive items, as well as the procedure for actions in case of an “Air Raid Alert” signal. 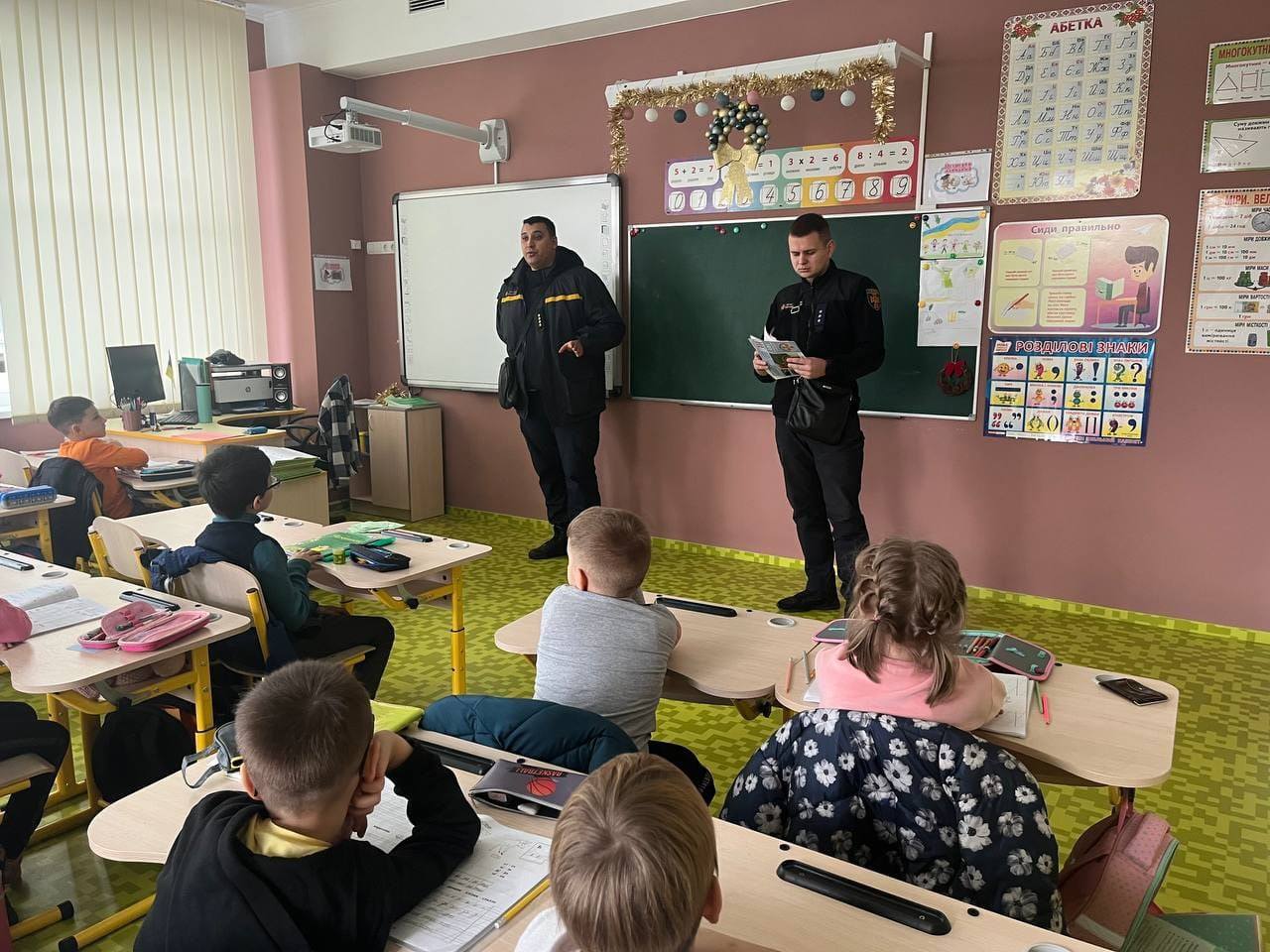 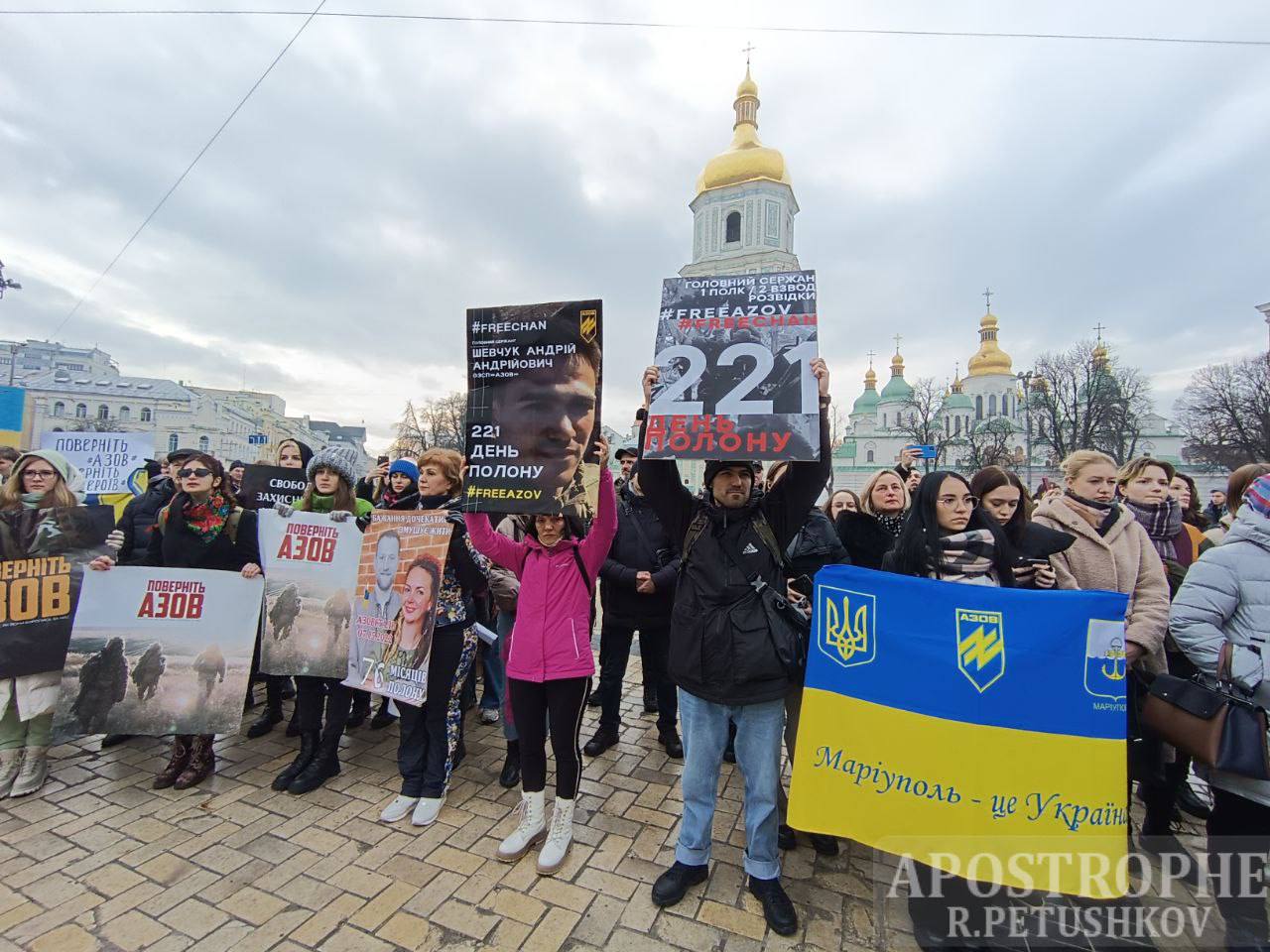 As part of the “Christmas Light for Hope” project, Gerry Hofstetter is planning a light-art tour in Kyiv and the oblast. 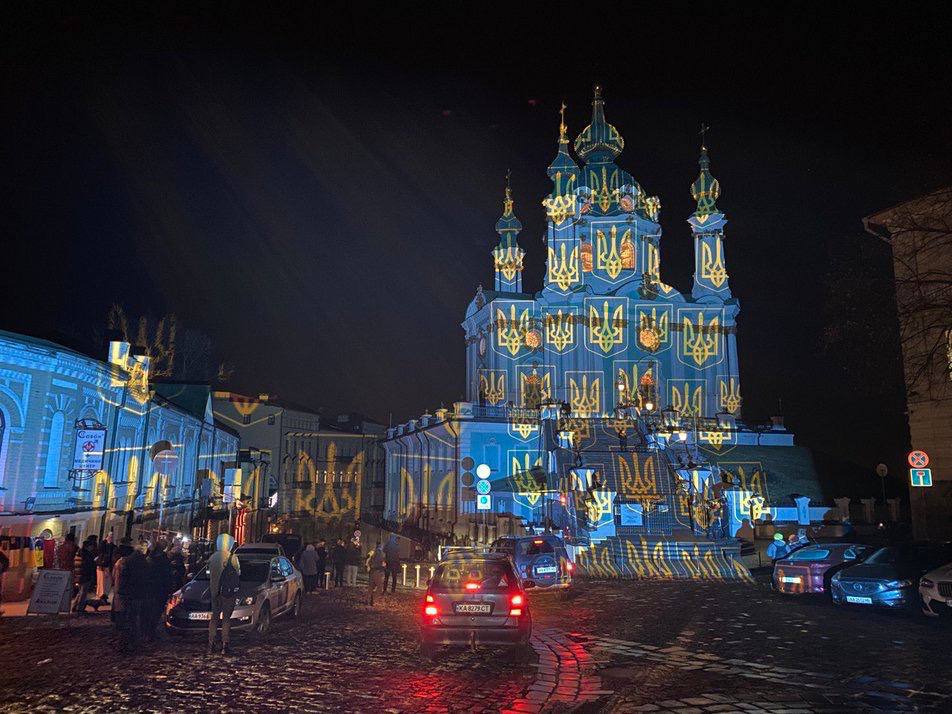 In honor of Christmas, the sculptures of the baby founders of Kyiv were dressed up as little angels with the words “AFU” (Armed Forces of Ukraine) and “Power engineers” on them. 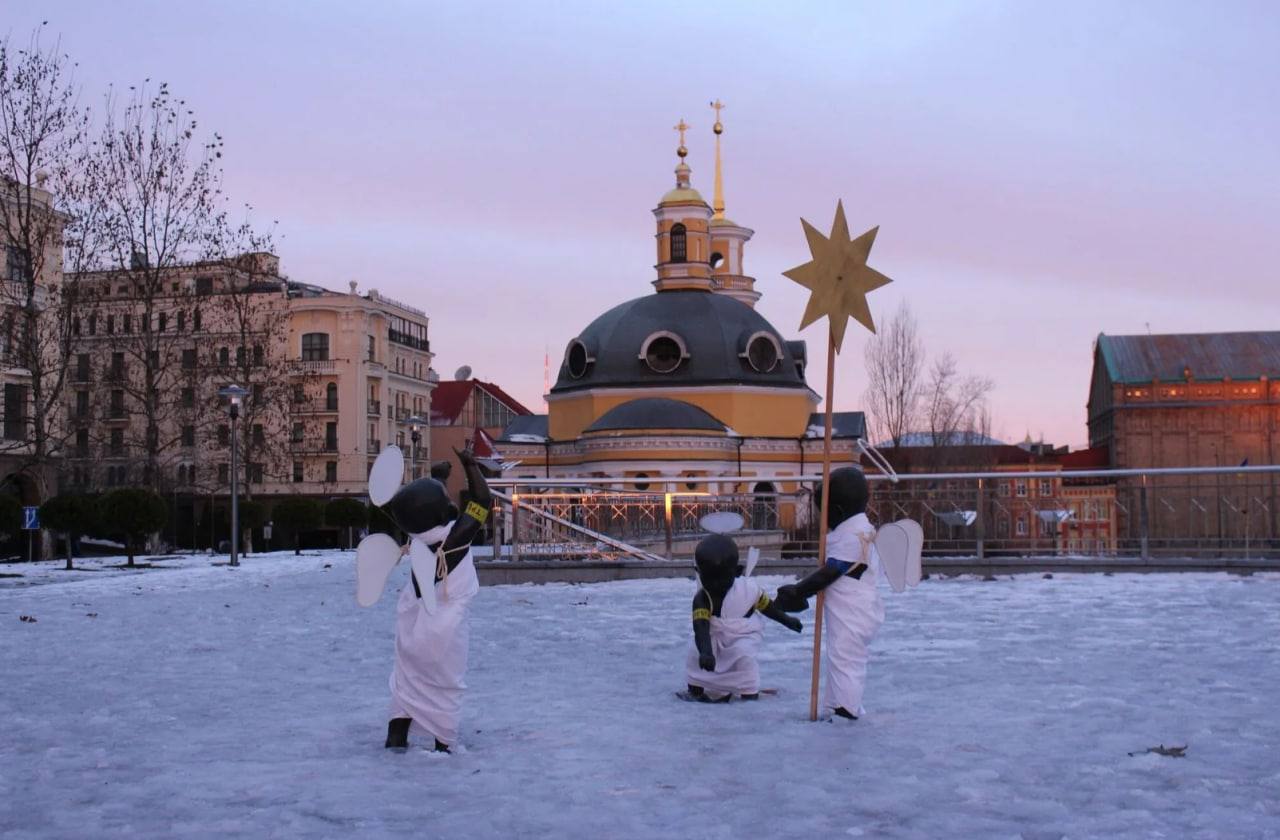 Portugal donated 50,000 euros for the reconstruction of the “Borodianka-Center” rehabilitation center in the Kyiv Oblast, which were collected from the sale of solidarity stamps.

WBO, WBA, IBO and IBF heavyweight champion Oleksandr Usyk (20-0, 13 KOs) donated 13.8 million hryvnias to the fund for the reconstruction of the village of Moshchun in the Kyiv Oblast. 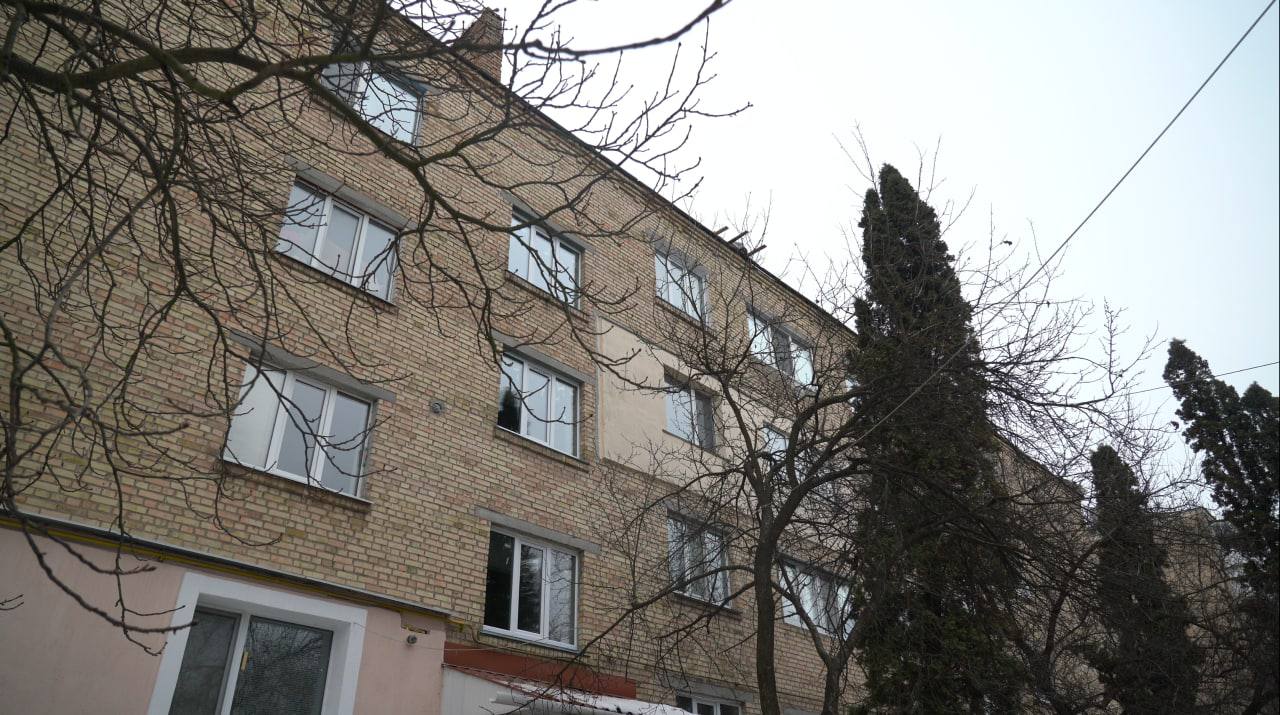 In the Zhytomyr Oblast, the SBU served a notice of suspicion to the legal adviser of a regional state institution for his justifying the occupation of part of the territory of Ukraine by russia.

In Zhytomyr, a 54-year-old local resident, who organized the importation of foreign cars from abroad with zero customs clearance under the guise of humanitarian aid for the needs of the Armed Forces of Ukraine, will face trial.

Humanitarian aid from the Red Cross Society was delivered to Zhytomyr for the Barashi community of the Zviahel Raion. This targeted aid will be handed over to the families of the war victims, internally displaced persons, and persons with Group 1 disabilities living in the community.

In Zhytomyr, water utility workers are finalizing the connection of generators to be ready for blackout. Generators for 500 and 800 kW were tested.

Chernihiv said goodbye to Ihor Sokorynskyi, who was killed in action near Bakhmut.

On the occasion of the Day of Power Engineer, President of Ukraine Volodymyr Zelenskyi honored six power engineers from the Chernihiv Oblast.

Yesterday, russians fired 45 times at the Krasnopillia and Esman communities in the Sumy Oblast.

Over the past day, the enemy continued to shell the civilian population of towns and villages of the border areas of the Kharkiv Oblast and settlements near the line of contact.

Yesterday at around 6 p. m., as a result of hostile shelling, a residential building, outbuildings and garages were damaged in the village of Dvorichna, Kupiansk Raion, causing fires.

This morning, russians launched mortar attacks on the Kupiansk Raion. The occupiers hit a private household in the village of Podoly.

On December 23, the russians killed two civilians in Donetsk Oblast – in Kurakhove. Another 5 people in the oblast were injured.

During russia’s full-scale war with Ukraine, enemy rockets killed 1,281 civilians in Donetsk Oblast and injured another 2,785. The number of victims in Mariupol and Volnovakha is currently unknown.

In the Lysychansk direction, 2 houses were destroyed: in Torske (Lyman community) and in Pereizne (Zvanivka community).

In the east of the Pokrovsk Raion, numerous shellings of the Mariinka community, especially the town of Mariinka, were recorded.

In Kurakhove, two people died and two were wounded as a result of russian shelling the previous day.

In Uman, a cycle of events for the Christmas and New Year holidays continues. They were organized by the Avdiivka City Military Administration together with the NGO “Plast – National Scout Organization of Ukraine” and the NGO “Power of Ideas”. The initiative was supported by the city authorities, the department of labor and social protection of the population of the Uman City Council and the socialhub “Avdiivka. Free people. So it was, so it will be.” 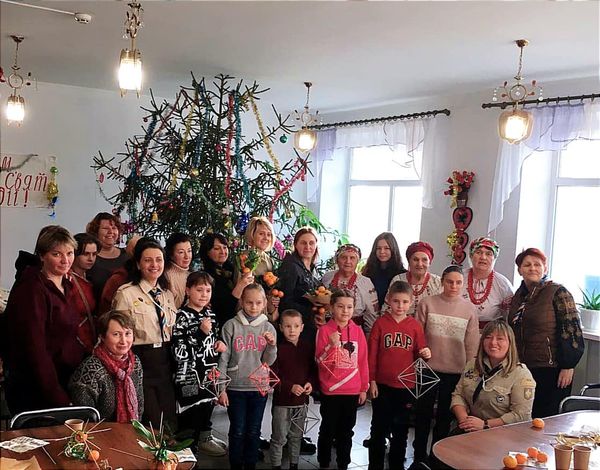 In the Bakhmut direction, the enemy shelled the areas of twenty-five settlements of the Donetsk Oblast with tanks, mortars, tube and rocket artillery. Among them are Spirne, Berestove, Soledar, Bakhmut, Klishchiivka, Chasiv Yar, Stupochky, Bila Hora, Dyliivka and Opytne.

In the Horlivka direction, one house in Toretsk was damaged. The enemy shelling also took place near Rozdolivka, Yakovlivka and Bakhmutske (Soledar community).

Units of the Armed Forces of Ukraine repelled the attacks of the occupiers in the areas of the settlements of Andriivka in the Luhansk Oblast and Yampolivka, Rozdolivka, Bakhmutske, Bakhmut, Pivnichne, New York, Krasnohorivka, Vodiane and Mariinka in the Donetsk Oblast.

In the Volnovakha direction, during the day, periodic artillery shelling of Vuhledar took place. There was no information about the victims.

In Mariupol, the occupiers demolished 38 buildings in the Livoberezhnyi [Left Bank] district. Among them were two kindergartens, a school and a children’s rehabilitation center. Now housing for the military will be built here.

During December, more than 60 fires occurred in the city. Because of this, 9 people died, including one child. Fires occur due to the absolute unpreparedness of housing and the lack of normal electricity supply to buildings. Through broken and unrepaired roofs, water enters the houses. This causes a short circuit in the wiring. As a result, fires start in apartments. This is evidenced by data from the official correspondence of collaborators.

Thousands of dolphins washed ashore in the National Natural Park “Tuzlivski Lymany” in Odesa. They died from Russian shelling and the noise caused by the explosions.

A charity fair “Christmas-Fest FOR VICTORY” is held in Odesa. Visitors can expect a concert by famous modern bands and artists. In addition, people are offered to buy rare handmade items: author’s wooden puzzles, collectible coins and stickers, Ukrainian postcards, New Year’s socks, jewelry, toys, candles, New Year’s decor, paintings and much more.The proceeds will go to the needs of the Armed Forces of Ukraine.

In the morning, russian troops shelled the center of Kherson. Currently, 58 people are known to have been wounded as a result of shelling, 18 of them are in serious condition. The number of dead and injured in Kherson is being clarified. The State Emergency Service reported that as a result of the shelling of the city center from the multiple launch rocket systems, 6 cars were damaged. Firefighters extinguished the fire within 40 minutes.

During the day, the russian army shelled four communities in the Beryslav Raion: Beryslav, Novovorontsovka, Mylove and Novooleksandrivka communities.

Russian military abducted 21-year-old student of Kherson State University, Halyna Yeltsova. The girl was taken from her own home in Henichesk Raion a month ago. Her location is still unknown.

The Security Service of Ukraine detained an accomplice of the russian occupiers in the Kherson Oblast. The collaborator headed a fake utility company in Chornobaivka and was engaged in quartering russian soldiers in the village.

A “Safety for Children” class was opened in Kherson. There, Kherson schoolchildren will be taught the rules of self-defense. The first lesson on the basics of life safety has already taken place.

Yesterday, the enemy carried out artillery strikes on the water area of ​​Ochakiv community. There are no casualties.

On December 24, an action was held in Mykolaiv in support of prisoners of war, missing during the hostilities and their families. Wives, mothers and friends of Ukrainian soldiers took part in the event. 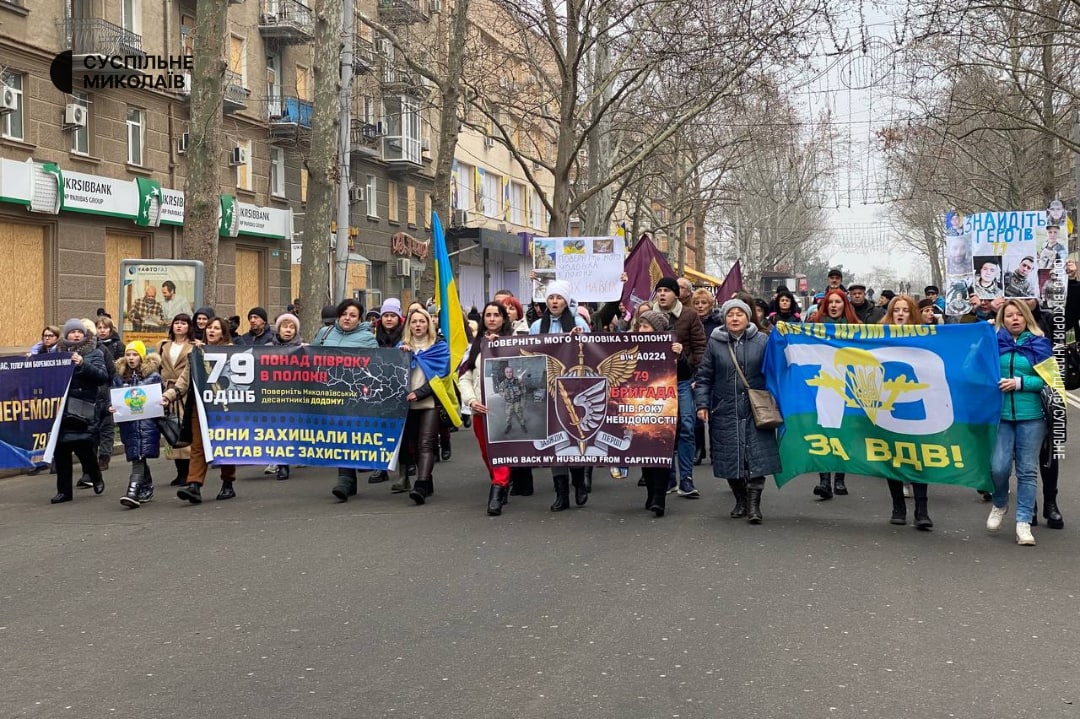 On December 24 and 25, more than 80 additional police patrols will work in the Kirovohrad Oblast.

After handing over 15 tons of books in russian to waste paper collection points, they raised money for a car for the military in Kropyvnytskyi.

Half a hundred generators and clothes for the military were brought to Khmelnytskyi from Lithuania. The humanitarian cargo arrived from the sister city of Šiauliai. The cost of assistance is 100,000 euros.

More than 26 thousand hryvnias were collected during charity screenings of the film “Strong” in Khmelnytskyi. With this money, volunteers purchased a Starlink station for the military of the 36th Separate Rifle Battalion. We will remind you that the main character of the autobiographical film is veteran Kateryna Lutsyk. Currently, she heads the public organization “Defense – Association of Volunteers”.

Every year on Christmas Eve, Scouts from all over the world spread the fire lit at the birthplace of Jesus Christ. It is a symbol of warmth, peace and harmony, peace of mind, love for people and the world. The ceremony of handing over the Bethlehem flame took place in T. Shevchenko Park. Representatives of the patriotic organization “Plast Khmelnytskyi” handed over the Blessed Flame to the city leadership, representatives of the clergy, chaplains of military units, and the entire Khmelnytskyi community.

A number of festive events have started in the Khmelnytskyi Regional Literary Museum. They are united by the theme “Unbreakable spirit of the New Year”. The first meeting took place with the writer Maria Demianiuk. She presented her new books for young readers.

Oleksandr Shvets, a senior sergeant from Kamianets-Podilskyi, died in the war. He was 45 years old. Bright memory of the warrior. 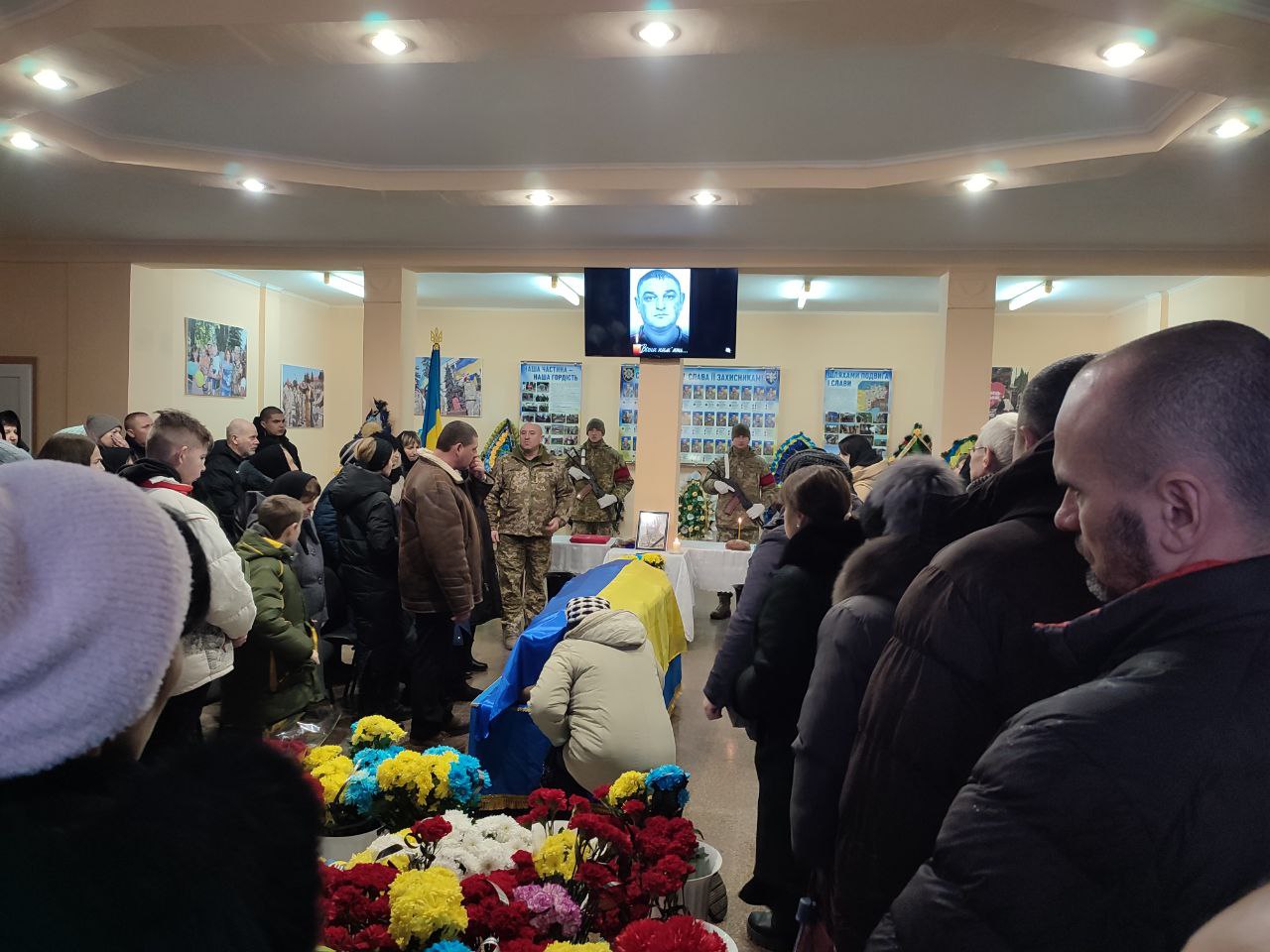 Employees of the Department of Social Protection spoke about the social initiatives planned for next year and the benefits for the families of fallen combatants that are in effect today. In addition to state aid, payments from the city budget of UAH 25,000 to children under 18 years old and UAH 3,000 to children of deceased persons awarded the title of “Honorary Citizen of the City of Kamianets-Podilskyi” are provided. Free meals for children in schools and kindergartens are also planned, in addition to the state – 50% discount on communal services, reimbursement of funds for the installation of monuments, etc. This year, 60 children of fallen soldiers and those currently participating in hostilities had the opportunity to rest in Lithuania. Next year, it is planned to provide children with trips abroad, and widows with vouchers for sanatorium-resort treatment and financial assistance of 10,000 hryvnias to mothers for Mother’s Day.

A volunteer medical patrol works in the Vyzhnytsia community of the Chernivtsi Oblast. The medical team visits shelters where displaced people live and provides them with free medical services. In four months of work, the medical patrol covered more than 250 people.

In Chernivtsi, the library named after Ivasiuk collects books for Ukrainian military personnel who are in hospitals. Anyone can donate books

In Uzhhorod, hot lunches were distributed to those in need. It is provided by the non-governmental organization “Quality of Life Foundation” together with the Uzhhorod City Council and the special emergency rescue squad of the State Emergency Service of the Zakarpattia Oblast.

Uzhhorod photo artist Kateryna Kish created a series of works that reveal the state of mind and its reflection in the language of art. And the war prompted this. Visitors to the artistic performance “Feelings” in Uzhgorod could experience visual art by taste, touch and smell.