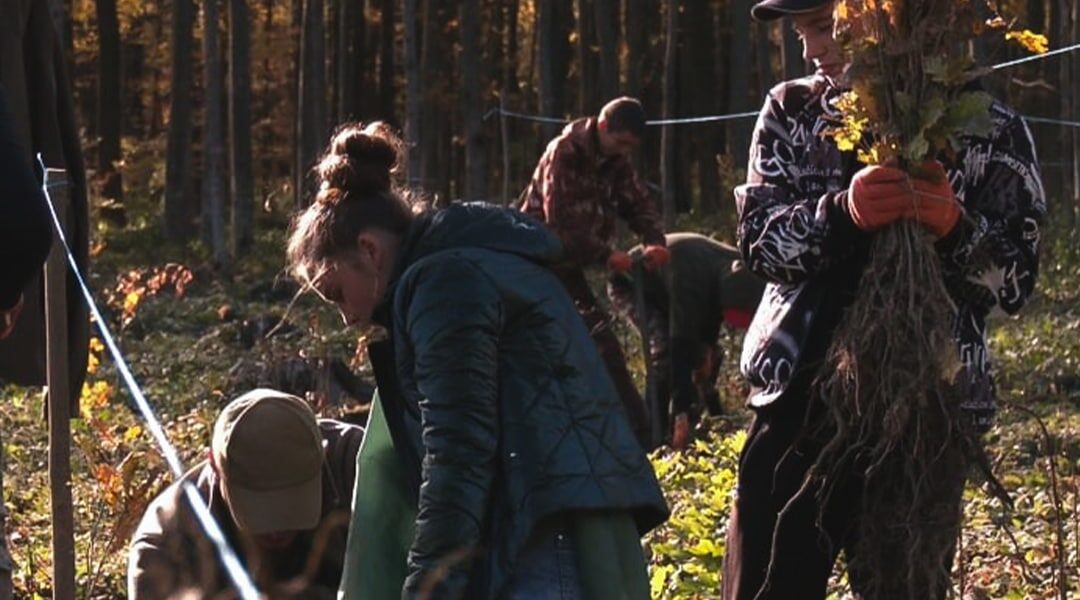 Operational information from the regions of the Active Community network 29 October, 2022

The “Active Community” initiative was launched by activists of the “Republika” Institute after the Euromaidan (2014), which focused on the activation and involvement of Ukrainians in the decision-making process. The goal for 2025: to activate and involve at least 1% of citizens in making decisions and promoting reforms in Ukraine on a systematic basis for the well-being of Ukrainian communities. Today we work in 30 communities in Ukraine.

Today in Kyiv, on the Maidan, they said goodbye to the commander of the marines Maksym Tokarev. 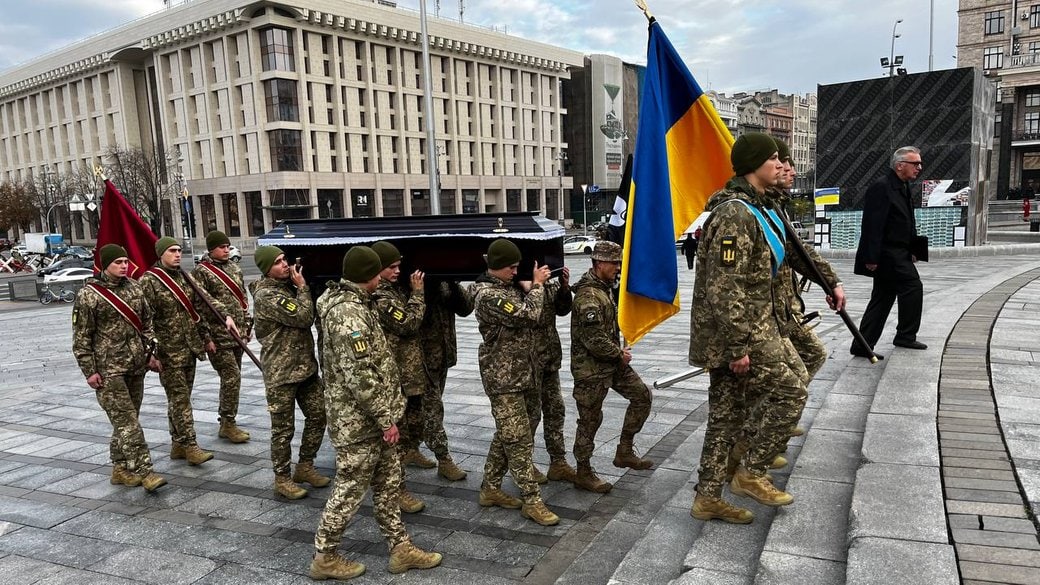 In Zhytomyr, the deputy director for educational work of one of the city’s lyceums was announced the suspicion. The woman publicly supported russia’s armed aggression against Ukraine and accused Ukrainian defenders and the Ukrainian authorities of starting and supporting the war.

The photo project “Angels of Sport” was presented in Zhytomyr. These are photos and stories about almost a hundred sportsmen who died defending Ukraine. Among them is Vitaliy Morozov, a master of sports from Zhytomyr.

Volunteers of the “Desna” public organization will glass the houses of those who suffered from russian shelling in February-March in the Bobrovytsia neighborhood for free. In total, they plan to repair nine houses in a week, for which they collected almost 200 000 UAH.

In Pryluky, they said goodbye to senior soldier Serhii Yevtushenko, who died in the Donetsk Oblast.

During the past day, the enemy shelled populated areas of the Chuhuiv, Kharkiv and Kupiansk raions of the Kharkiv Oblast.

As a result of shellingan economic building was damaged in Vovchansk and residential buildings in the village of Dvorichna. Fire broke out. 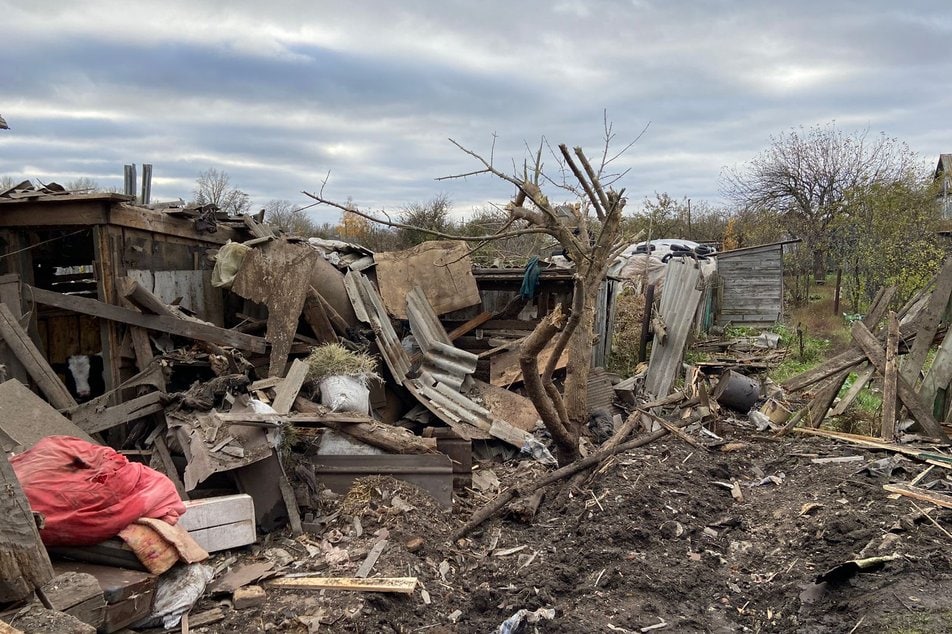 Two women aged 43 and 40, as well as a 60-year-old man were injured in the Kupiansk Raion.

Demining continues in the territories liberated from the enemy. During the day, the pyrotechnic units of the State Emergency Service defused 413 explosive objects.

Four residents of the Donetsk Oblast are suspected of passing on information about the Ukrainian military, border guards and police to the russian occupiers. Men face imprisonment for 8 to 15 years.

On October 28, the russians killed three civilians of the Donetsk region: two in Kurdшumivka and one in Pivnichne. It also became known about 8 wounded yesterday.

Since the day of the full-scale war, russian missiles have killed 1,115 civilians living in the Donetsk region, and wounded another 2,491. The number of victims in Mariupol and Volnovakha is still unknown.

In the Lysychansk direction, mass shelling occurred again in Torske and Zarichne of the Lyman community. The consequences of shelling are being clarified.

Avdiivka was subjected to numerous shelling in the old and central part of the city. Information on the victims and extent of destruction is being clarified.

In the Ocheretyne community, there were shellings in the Vodiane, Nevelske and Pervomaiske raions. At least two houses were damaged in the last one.

The russians also fired on the outskirts of Marinka community. There are no casualties.

Two residents of Pokrovsk were sentenced to imprisonment because they collected information about the location and functioning of infrastructure facilities in the city. Yes, they took photos of government buildings, military facilities, bridges, video surveillance cameras, electric substations, railway timetables, etc. The information was transmitted via messenger to the phone of the mobile operator of the so-called “DNR”. The woman was sentenced to 5 years, the man to 6 and a half years of imprisonment.

Starosta districts of the Pokrovsk community received a humanitarian cargo of bottled water from the French charitable foundation “ACTED”. Each starosta district will receive 10 tons of drinking water.

On October 28, three civilians were killed in the settlements of Kurdiumivka and Pivnichne, and eight more people were injured as a result of shelling by the russian army. 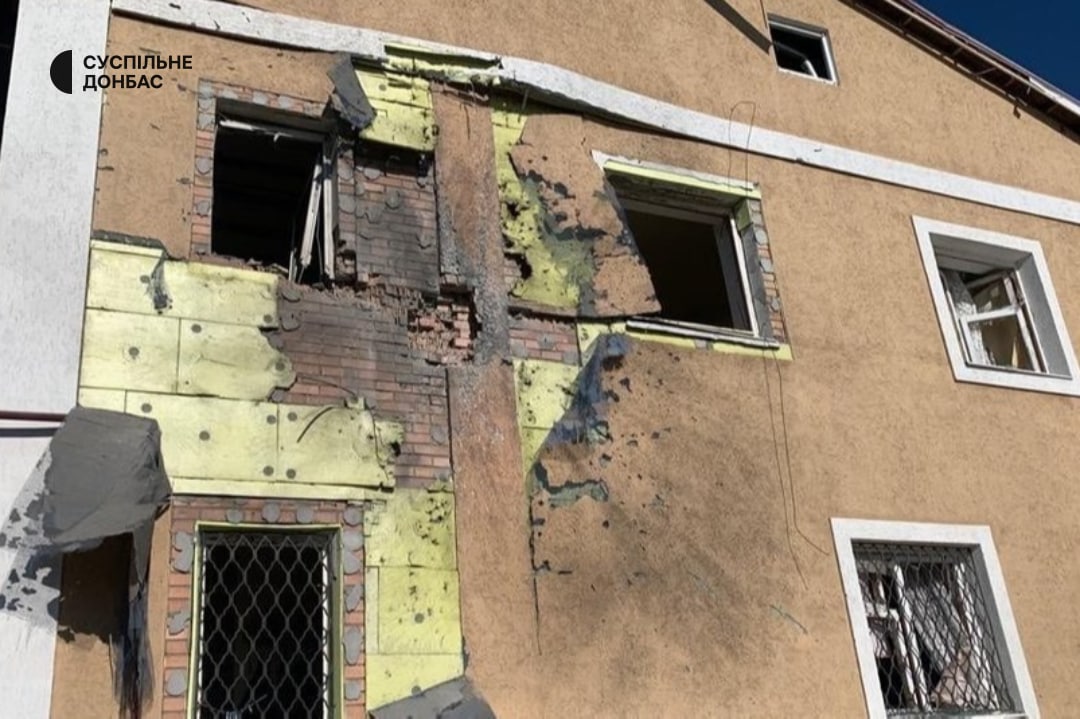 The Svatove-Kreminna route in the Luhansk Oblast is under full fire control of the Ukrainian military. The spokesman of the Eastern Group of Forces (Armed Forces of Ukraine), Serhii Cherevatyi, informed the Suspilne Media about this.

Over the past day, on October 28, the russian military shelled 12 settlements in the Zaporizhzhia Oblast. 14 reports were received about the destruction of civil infrastructure objects. In particular, the enemy once again fired on the settlements of Polohy and Vasylivka raions. As a result of the shelling, high-rise buildings were affected, roofs of houses were broken, facades were damaged, and the courtyard areas were gutted. In some places, houses were completely destroyed.

As a result of the occupiers’ aggression, two civilians were injured. They were hospitalized in a medical facility.

This afternoon, the russian military attacked Zaporizhzhia with missiles again, hitting critical infrastructure facilities. Fortunately, there were no casualties. As a result, an industrial building was destroyed.

The Security Service of Ukraine announced the suspicion of a resident of Mariupol, who assumed the pseudo-position of “head of the military-civilian administration” of the temporarily occupied city of Prymorsk.

Another exchange of prisoners was held in Zaporizhzhia Oblast. It was possible to free 52 Ukrainian officers, medics, sergeants and soldiers. Among them are 12 soldiers of the National Guard of Ukraine (including 2 “Azov” fighters), 18 – of the Naval Forces, 8 – of the State Border Service of Ukraine, 9 – of the Territorial Defense, 3 soldiers of the Armed Forces of Ukraine and 2 civilians.

During the day of October 29, russian troops launched 4 missile strikes and up to 25 air strikes, carried out more than 70 attacks from multiple launch rocket systems. Areas of more than 35 settlements were hit. Among them are Davydiv Brid and Mala Seidemynukha in the Kherson Oblast.

The russian military forces evict residents of one of the villages of the Kherson Oblast, which is located near the oblast center. They were given two days to “evacuate”. At the same time, the occupiers set up additional roadblocks on the so-called “evacuation” routes to the temporarily occupied Crimea: they conduct a thorough inspection and check of civilians.

In Beryslav, the russian soldiers en masse change into civilian clothes and settle in the homes of local residents.

During the day, on October 28, law enforcement officers opened 20 criminal proceedings and registered six facts of violations of the laws and customs of war by the russian military in the Kherson Oblast. In particular, it is about arbitrary settlement and robbery of local residents.

Yesterday, the enemy shelled the settlement of Halytsynove hromada. As a result, four people were injured. The power line was also damaged. Within an hour, the power supply was restored.

According to the Operational Command “South”, on October 28, the enemy shelled the Ochakov port water area with mortars. There were no casualties.

Enemy shelling of the territory and settlements of the Berezneguvate community, located on the dividing line, continues. Information on victims and damage is being clarified.

Yesterday, the settlement of Shyroke community came under fire. As a result, two residential buildings were destroyed, and three more were damaged (windows were broken by fragments and roofs were damaged). There were no casualties.

In the Black Sea, the russian fleet has a total of nine ships and boats (including one large landing ship, two surface ships and one submarine, which are carriers of two dozen high-precision cruise missiles of the “Kalibrr” type).

2.5 million liters of water were delivered to the people of Mykolaiv by the volunteers of the organization “Mykolaiv will drink”. Every week, starting in May, caring Odesa residents load 150 tons of drinking water and take it to Mykolaiv. 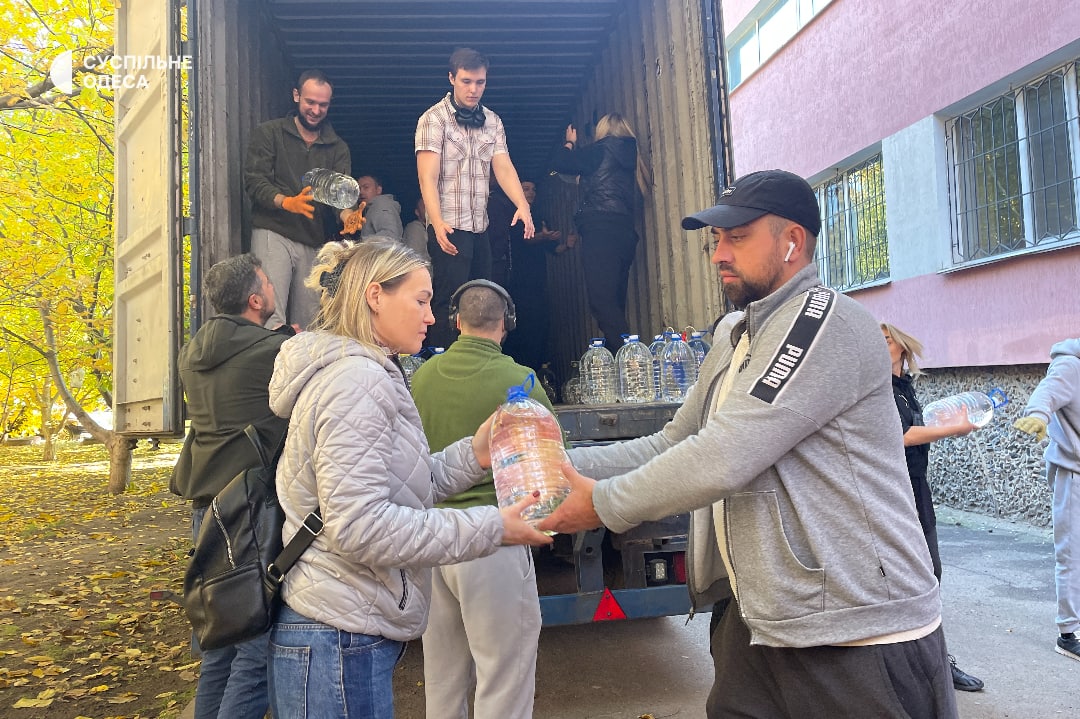 In Izmail, the city in the Odesa Oblast, city council members voted to move the monument to the russian general Suvorov to the museum. This will be done when the appropriate documentation is prepared.

Last night 3 communities came under fire: Nikopol, Marhanets, and Myrove. In Nikopol, fragments of enemy shells wounded a 39-year-old man. He is now in a moderate condition in the hospital. A gas station operator’s room was destroyed, and 10 garages were damaged. In the city, 8 high-rise buildings and private houses, several shops, a hotel, a furniture factory, another gas station, a tire repair shop, a bus stop, a gas pipeline, and a power grid were damaged. 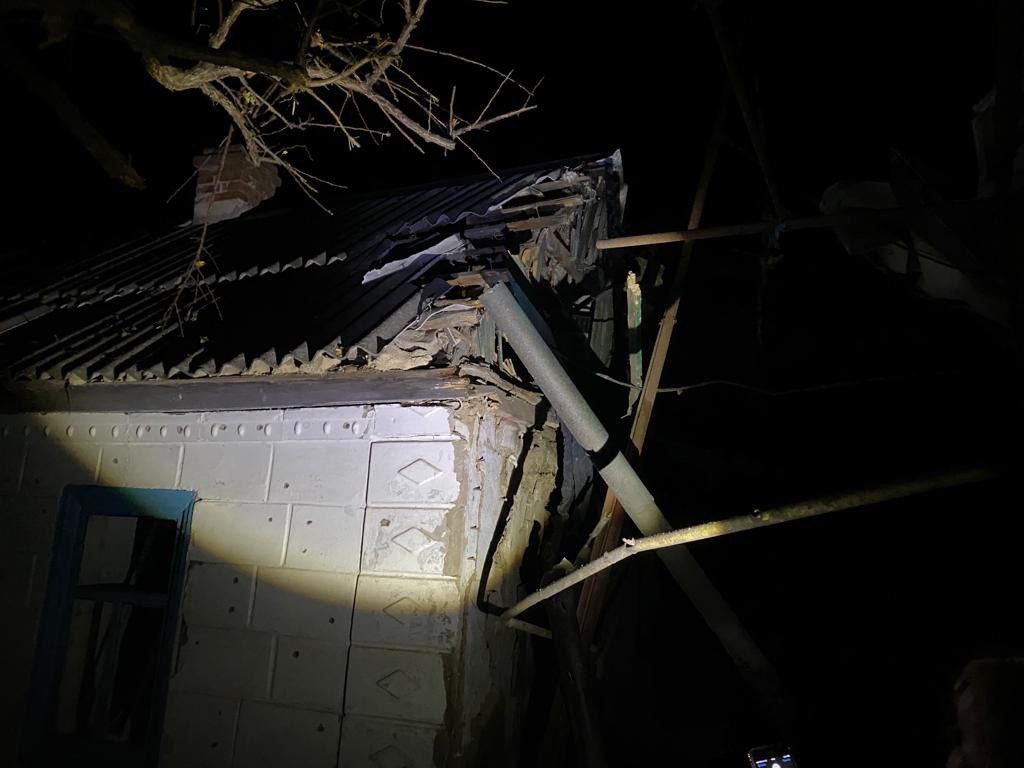 The SBU (Security Service of Ukraine) detained a russian agent in the frontline areas of the Dnipropetrovsk Oblast. He was spying on the positions of HIMARS and long-range M-777 howitzers in the southern sector. In addition, the offender adjusted numerous missile strikes on Nikopol, in particular on energy infrastructure facilities, and “reported” to the occupiers about the consequences of aerial attacks.

The “Epolets” band performed a charity concert in Dnipro. The goal of the charity fund “For Heroes”, which organized the band’s concert tour, is to raise 16 thousand dollars for vehicles for the Armed Forces of Ukraine. Earlier, concerts were held in Vinnytsia, Ternopil, and Lviv. Half of the amount has already been collected.

Three soldiers from the Kirovohrad Oblast fell in the war defending Ukraine from russian invaders. In the Bobrynets community, they said goodbye to Ihor Ivashchenko, born in 1969. On October 18, the life of soldier Yevhen Kostenko from the town of Dolynska was cut short. A native of the city of Svitlovodsk, soldier Oleh Pishnyi, was killed in the battles for Ukraine. The funeral was held in Uzhhorod, where the man had been living with his family for a long time. 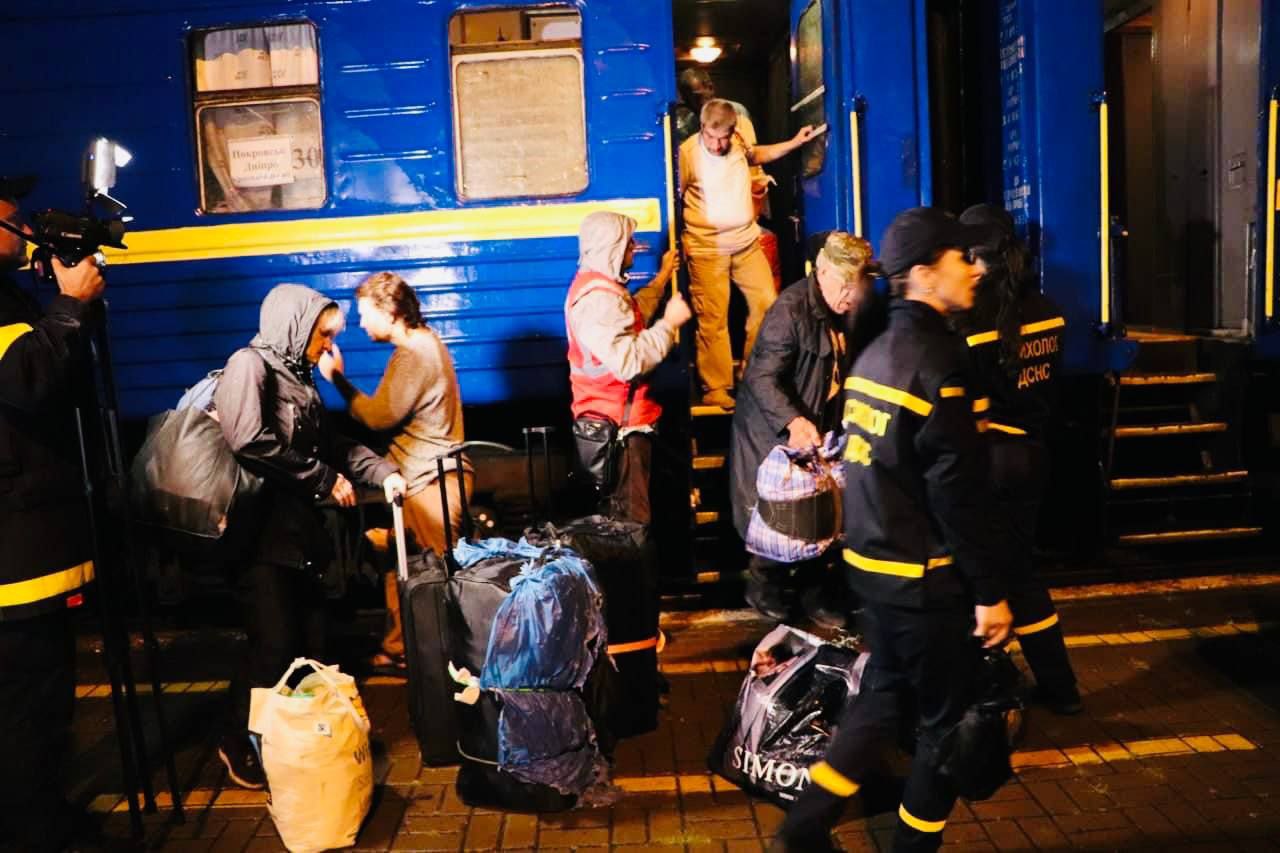 In the Koziatyn community of the Khmilnyk Raion, on the basis of the Center for Professional Development of Pedagogical Workers, Ukrainian language courses for local residents and internally displaced persons were launched.

Ukrainian defenders will enjoy apples from the church garden of Druzhne, a village in the Kalynivka community of the Khmilnyk Raion. This year, the orchard brought a rich harvest of apples, so they decided to use them to their advantage. Some of the apples have already been sent to the soldiers. Fruits will also be delivered to wounded soldiers undergoing treatment in medical institutions.

Liubomyr Lukach, a fighter from the village of Tysmenychany of the Ivano-Frankivsk territorial community, was killed in action on October 22 in the Donetsk Oblast. He served as a senior sergeant in the Armed Forces of Ukraine.

Vasyl Pohorilyi from Obertyn, Ivano-Frankivsk Oblast, was killed in the battle with the russian occupiers. He went to the front as a volunteer. Vasyl Pohorilyi is survived by his parents.

A warrior of the 10th detached mountain assault brigade “Edelweiss”, Ihor Kalyn from Kolomyia, was killed in the russian-Ukrainian war. He was a scout. He was killed on October 28 while performing a combat mission in the Donetsk Oblast.

Residents of the Bolekhiv community planted 2,460 trees in the local forestry as part of the “Let’s create forests together” campaign. Schoolchildren, students and employees of relocated enterprises joined the initiative. 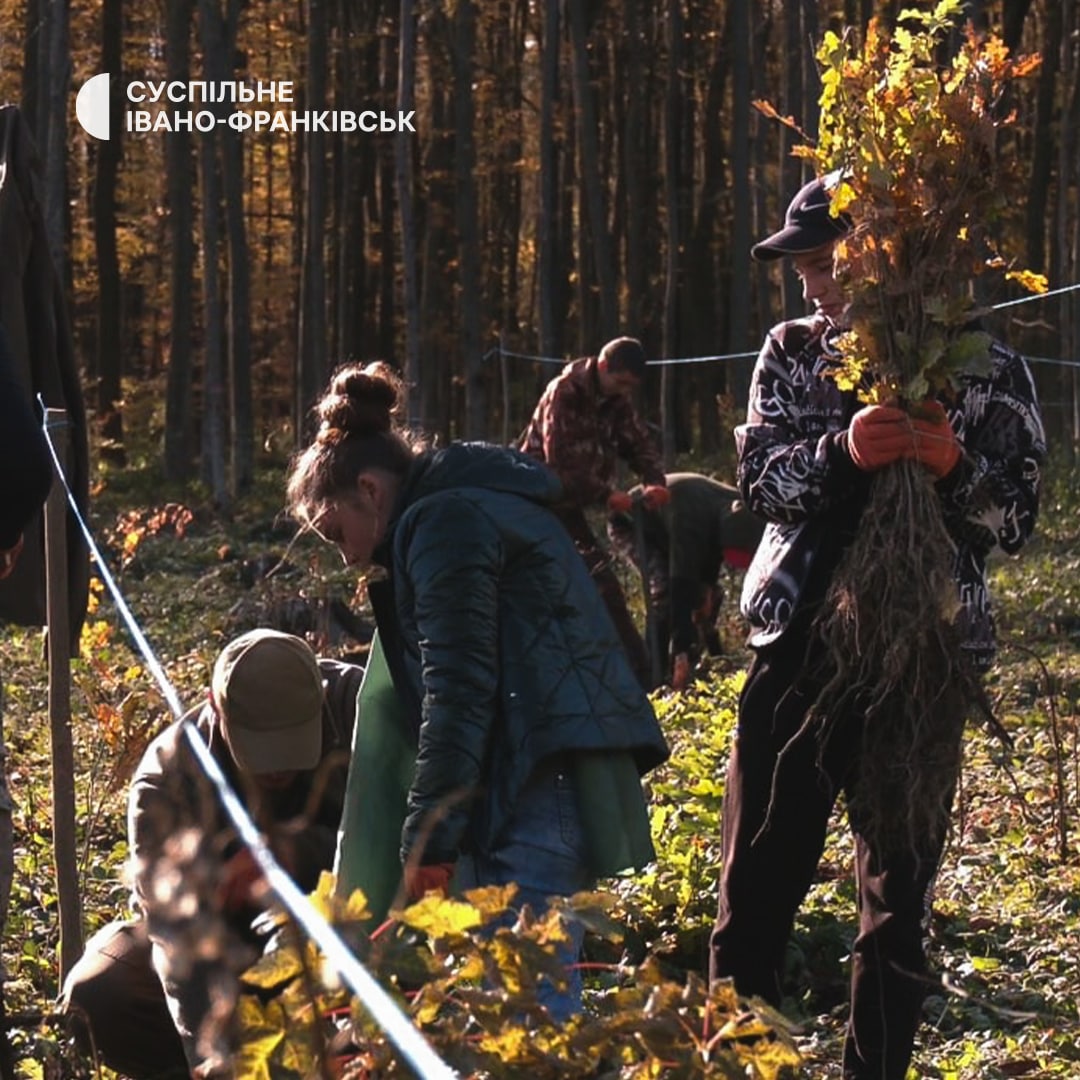 In the Rivne Oblast, the planned power outages announced for the weekend have been canceled. Rivneoblenergo company will supply electricity to the population without restrictions. This will be done in the test mode for two days.

In the center of Rivne, volunteers held a campaign “Winter tires for Banderamobiles”, where they collected used tires, rims and raised money in order to deliver the necessary items to the soldiers on the front lines. The event was organized by members of the charity community “Responsible Ukrainians”.

Yuvileina Street in Rivne, which is subject to decommunization, was decided to be named after the fallen soldier Vitaliy Mahel, who was one of the leaders of the Territorial Defense Forces. The proposal of the commission has to be considered by the city council.

On October 28, Ukrzaliznytsia presented an updated train schedule, which includes 14 new flights, including 4 international trains to Chisinau, Przemyśl, Chelm and Vienna, 4 new Intercity+ flights introduced in 2022, as well as 58 optimized flights across Ukraine and abroad border, including Transcarpathia.