Operational information from the regions of the Active Community network. January 11, 2023

The three hundred and twenty-second (322) day of heroic resistance of the Ukrainian people to the large-scale russian military invasion continues.

The three hundred and twenty-second (322) day of heroic resistance of the Ukrainian people to the large-scale russian military invasion continues. 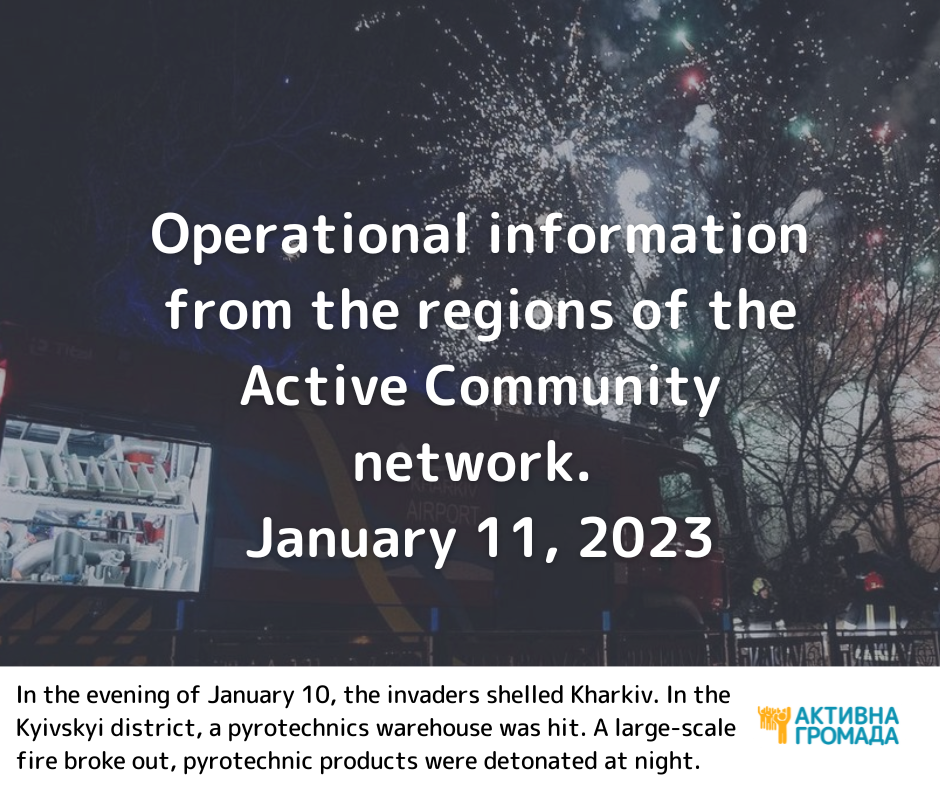 Mayors of four European capitals – Warsaw, Prague, Bratislava and Budapest – arrived in Kyiv. The details of the visit to the Ukrainian capital are not yet known.

The deputy head of the Kyiv City State Administration, Maryna Honda, said that Kyiv is preparing a program for the reintegration and rehabilitation of military personnel.

The Cabinet of Ministers made a decision on the arrangement of the National Military Cemetery on Bald Mountain in the Pechersk district of the capital.

Today, in the Bucha raion, pyrotechnicians carried out the liquidation of explosive objects.

Oleksandr Pavlyuk, the commander of the Kyiv Defense Forces and Means Group, said that in the north of Kyiv Oblast, sappers are mining the routes that the enemy can use in the event of a repeated attack. Paths are mined in order to prevent the occupiers from getting into the order of battle of the Ukrainian units, after which they can strike them with artillery.

In Zhytomyr, they said goodbye to two military men who died defending Ukraine. On the shield, the Heroes who laid down their lives for the freedom of Ukraine, Oleksandr Afanasiev and Serhii Halas, returned.

Vasyl Berdychevskyi, a volleyball player from Zhytomyr Oblast, died in the fighting in eastern Ukraine. The athlete was called up for military service in April 2022, commanding the airmobile platoon branch of the airmobile company of the airmobile battalion.

The teacher of the Zhytomyr choreographic ensemble «Sonechko» Oleg Hryban told how he volunteered in the Armed Forces and became a scout. On the first night in Bakhmut, he says, he counted 60 hits.

ME «Zhytomyrvodokanal» received a 400 kW generator from international organizations. In the event of a power outage, it will ensure the operation of the flushing pumps at the water treatment station.

Today, explosive devices were detonated near the village of Shestovytsia.

Chernihiv Oblast received help from the Danish company Rockwool in the form of three generators: two of 200 kW and one of 165 kW. Two generators are planned to be transferred to critical infrastructure facilities in Pryluky and Novgorod-Siverskyi in the event of a power outage to provide backup power.

During yesterday’s day, the russians made 33 strikes on settlements in two border communities of Sumy Oblast. Warehouses of a local farm were damaged in the Velyka Pysarivka community. The russians fired mortars at the Esman community.

Yesterday, around 11:00 p.m., the russian occupiers shelled Kharkiv, previously with the “Smerch” anti-aircraft missile system. In the Kyiv region, a pyrotechnics warehouse was hit. A large-scale fire broke out, pyrotechnic products were detonated at night. There were no casualties.

During the day, the enemy shelled the areas of more than 20 settlements in the Kupyan, Kharkiv, Chuguyiv and Bogodukhiv raion of the Kharkiv Oblast.

In particular, Kupyansk, Vovchansk, Dvorichna, Lopan, Krasne and other settlements were under fire. Private houses, commercial buildings and civilian cars were damaged. No casualties.

Investigators found the tail parts of the Smerch anti-aircraft missile defense system, which russia fired at Kharkiv on the 10th of January. The stabilizer block of one of the shells was seen near Kyiv metro station.

At night and in the morning, the russians fired mainly in the central part of the Oblast.

In the Donetsk direction, the Kurahovo community was once again the most affected. In Kurakhovo, the enemy targeted the enterprise — equipment and a garage were damaged. In Kurakhivka, a private house and a 2-story building were directly hit, another 3 houses were partially damaged – we are establishing information about the victims. In Avdiivka, chaotic shelling continued throughout the city during the night, and in the morning the russians launched 2 artillery barrages and launched a rocket attack – according to preliminary information, there were no casualties. In addition, shelling was recorded in Mariinka and Ocheretyn communities.

In the Horlivka raion, periodic shelling of the Chasiv Yar and Toretsk communities took place.

Late at night, in the direction of Lysychansk, the russians hit the Lyman with S-300 missiles, damaging the school. Fortunately, there were no casualties.

Since the 24th of February, the russians have killed 1,296 civilians of Donetsk Oblast, wounded another 2,840.The number of victims in Mariupol and Volnovakha is currently unknown.

The enemy hit the city – Avdiivka, the village of Netaylove. Avdiivka suffered the most attacks. The rashists hit the city 8 times with artillery and “Hrad”. There was no information about damage and casualties.

Volunteers from Great Britain visited Pokrovsk. In order to support the residents of the front-line region, representatives of the charity organization “Siobhans trust” together with volunteers from Zaporizhzhia ChF “M.P.I.A.” organized a free distribution of pizza in the Pokrovsk community.

On the 10th of January, the russians killed 1 civilian of Donetsk Oblast — in Bakhmut.

Residents of Mariupol write that their houses still lack not only heating, but also windows. The occupiers do nothing about it. People cover their windows with a film on their own to somehow keep warm.

There is still a danger of rocket attacks. The situation is tense, but under control.

On the occasion of the first anniversary of the creation of the Oblast Administration of the local Territorial Defense Forces “South” Acting Oleg Bryndak, Deputy Mayor of Odesa, presented honorary awards of the Odesa Mayor to the military at a solemn meeting.

In the park named after Taras Shevchenko opened a mobile exhibition that introduces the works of Ukrainian illustrators about the support of Ukrainians by the European Union during the war. The exhibition is organized as part of the communication campaign “Together we are Europe”, implemented by the EU Representation in Ukraine as part of the “Ukrainians about the EU” project. The exhibition has already been viewed by tens of thousands of people in different cities of Ukraine.

According to the “South” Air Command, at noon, on January 10, in Mykolaiv oblast, air defense forces shot down a russian unmanned aerial vehicle “Orlan-10”.

Yesterday, the enemy struck in the direction of Ochakiv with multiple rocket launchers. There were no casualties.

During the night, the enemy shelled the territory of the Kutsurub community with MLRS, launching more than 40 rockets. The consequences of the damage are being clarified. According to preliminary information, there were no casualties.

In Mykolaiv, Pervomaisk, Voznesensk, and Bashtanka districts the day and night were relatively calm.

Russians shelled Nikopol raion with heavy artillery 4 times. They directed more than 20 shells at peaceful towns and villages. They landed in the Chervonohryhorivka community, Marhanets, and Nikopol. A 26-year-old man was wounded. He was taken to the hospital.

In Marhanets several houses, an industrial enterprise, a gas station, a shop, a gas pipeline, and a power grid were damaged.

A collaborator was detained in Dnipro who was passing information about the location of Ukrainian air defense to the occupiers.

Dnipro artist Yulia Strukova draws cats and sells the paintings, raising funds for the Armed Forces. She has been doing this for more than 2 months. Today the community said goodbye to the defender of Ukraine, fellow countryman Dmytro Kostyshyn. A young man who loved Ukraine and gave his life for its future, for the future of each of us.

The Mayor said that at the session of the City Council, the deputies had adopted the budget for the current year. Of course, first of all, the funds will be used to support the military. This year’s budget already provides UAH 5 million for this purpose, and this amount will continue to increase. Much attention is paid to the social protection of the population, for which UAH 53.1 million has been allocated. And the major part of the funds is allocated to support vulnerable groups of the population.

For children who arrived in our city from the frontline territories, the SOS Civil Defense Headquarters conducted a neurography session, and even those who were skeptical about this new method of art therapy changed their minds at the end of the session.

Residents of Novomykolaivka village council of Kherson oblast received humanitarian aid from residents of Radove village of the Loknytsia community. Volunteers of the Church of Christians of Evangelical Faith together with fellow villagers collected 40 cubic meters of firewood and 600 gifts for the children of servicemen. They also handed over food, building materials, clothes, medicines, stoves, and hygiene products. In addition, the trucks delivered food sets, potatoes, carrots, cabbage, and other vegetables, as well as stoves to Chornobaivka, Antonivka, and Posad-Pokrovsky.

In Zakarpattia, 203 entrepreneurs received compensation from the state for the employment of IDPs in 2022. They provided jobs for 504 internally displaced persons. https://zakarpattya.net.ua/News/225245-Na-Zakarpatti-203-pidpryiemtsiv-otrymaly-vid-derzhavy-kompensatsii-za-pratsevlashtuvannia-pereselentsiv-u-2022-rotsi

The new season of TATOhub.Uzhhorod starts with a master class from historian and researcher of Kharkiv and Zakarpattia of the First World War, genealogist, and expert of the UAGenealogy community Anton Bondariev.