Operational information from the regions of the Active Community network January 8, 2023 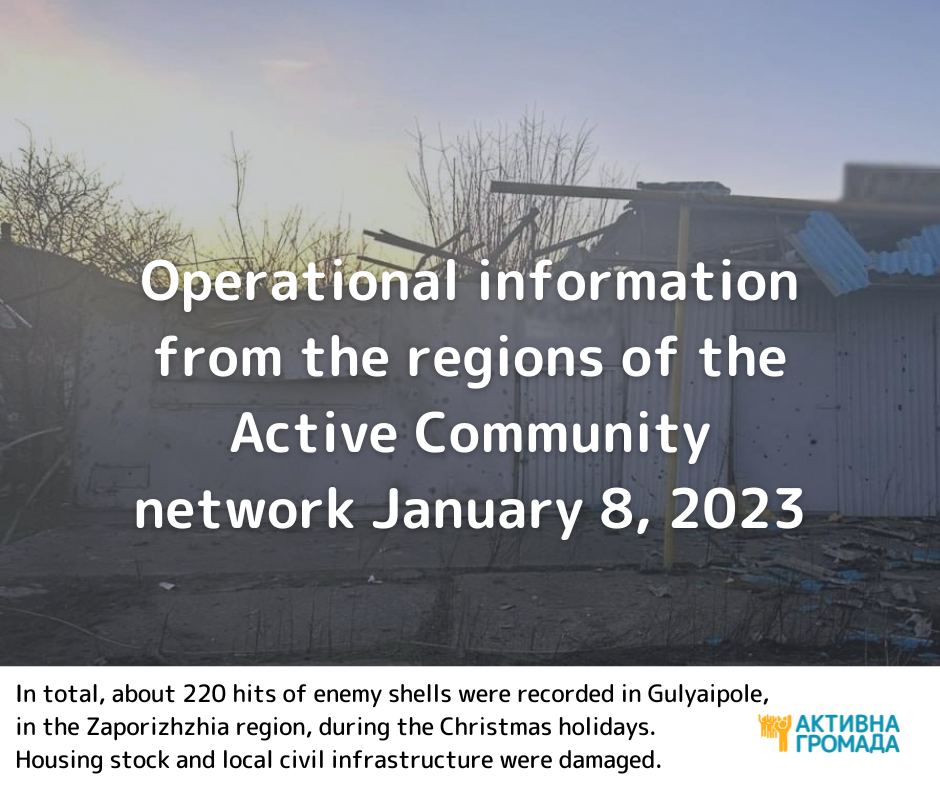 Due to the possible offensive of the invaders, several lines of defense about a thousand kilometers long have been erected around Kyiv. The Commander of the Kyiv Defense Forces noted that the russian occupiers are now preparing another powerful attack with the mobilized military, and the enemy should not be underestimated.

The street in the Dniprovskyi district of the capital, which used to be named after Mykola Lebedev, is now named after the defender of Ukraine Yuriy Popravka. In 2014, Yuriy was captured by terrorists. Since then, contact with him was lost. In February 2015, Yuriy Popravka was posthumously awarded the title of Hero of Ukraine and the Order of the Gold Star.

The Ivan Honchar Museum opened an online project in support of the Armed Forces of Ukraine. The exhibition can be viewed at the link.

Viewing is free of charge, and the museum calls for the nominal price of the ticket to be transferred to support the army and the restoration of Ukraine. The exhibition also has an English version.

In the Zhytomyr Oblast, up to 100 servicemen are involved in rehabilitation activities on the basis of sports schools and sections of the oblast. Currently, qualifying competitions for the All-Ukrainian “Invictus Games” are being prepared.

In a village in the Zhytomyr Oblast, a 6th grade student sold her paintings to help the Armed Forces of Ukraine. Evelina Popushoi transferred the collected 2,000 hryvnias for the needs of the soldiers..

Craftswomen of Zhytomyr have designed a sketch to embroider a four-meter “Towel of Victory of the Zhytomyr Oblast”. To choose the symbols, they considered examples of ancient towels of the Zhytomyr region, which are kept in the oblast museum of local lore. The towel is being prepared for the day of Ukraine’s victory in the war.

The Semenivka community of the Novhorod-Siversk Raion was subjected to artillery shelling by russians. There were no losses among the personnel or equipment.

In the Chernihiv Oblast, they said goodbye to four defenders of Ukraine who fell in the East: Valeriy Sabardin, Oleksandr Kalinich, Viktor Ovchynnikov, and Ivan Tabirtsa.

Yesterday, russians dropped two pieces of explosive ordnance from a drone into the yard of a resident of the Velyka Pysarivka community in the Sumy Oblast. The man was not injured.

In the evening, after 8 p. m., the russian military opened fire from a machine gun in the direction of the Shalyhyne community. In total, 16 bursts were recorded. There were no casualties or destruction.

Around midnight, the russian military attacked the Znob-Novhorodske community, firing self-propelled artillery systems. There were 26 hits. A fire broke out on the territory of a local enterprise.

The rest of the night passed without shelling from the russian federation.

Last night, the enemy launched two missile attacks on the town of Merefa, Kharkiv Raion. A civilian industrial facility was damaged. A 50-year-old civilian was killed.

In Dvorichna, a private residential house and the building of the State Emergency Service unit came under enemy fire. Also, 2 tank trucks and a rapid response fire engine were damaged. There were no casualties.

On January 7, the russians killed 1 civilian of the Donetsk Oblast — in Bakhmut.

Another 8 people in the oblast were wounded.

Since February 24, the russian military have killed 1,293 civilians in the Donetsk Oblast, and wounded another 2,831. The number of victims in Mariupol and Volnovakha is currently unknown.

In the east of the Pokrovsk Raion, russians were most active in shooting at the Kurakhove community. Damage was inflicted to the heating networks in Kurakhove, 3 private houses in Kurakhivka, utility premises in Vovchanka, 2 houses and a summer kitchen in Ostrivske. Artillery shelling of Maryinka continued throughout the night, and in the morning Avdiivka came under Grad MLPS shelling.

On Christmas Eve, the occupiers once again attacked one of the energy enterprises of the DTEK Energo company, which had already been subjected to terrorist attacks.

The Avdiivka NGO “SYNERGY PRO”, with the support of the Avdiivka City Military Administration, received ten gasoline generators from the Volyn Oblast Charitable Foundation “Caritas-Volyn”, which during power outages are already being used for the needs of citizens who remained in the city under Russian shelling, as well as to ensure the functioning of the community’s critical infrastructure facilities.

Two missile strikes on Kostiantynivka were registered, and the industrial zone was damaged there. Fortunately, there were no casualties.

In the Horlivka sector, 1 person was killed and 1 person was wounded in Soledar. Also, 2 houses in the community were damaged in Paraskoviivka.

After midnight, the enemy launched seven missile attacks on Kramatorsk. An educational institution, an industrial facility, and a garage cooperative were damaged. There were no casualties.

In the Lysychansk sector, Torske and Zarichne of the Lyman community were shelled close to 20 times. No casualties, the extent of destruction is being established.

The re-registration of vehicles in the so-called “LPR” is in no hurry. Currently, only a preliminary registration is organized for the issuance of registration documents, license plates, and driver’s licenses. However, in order to even get in this queue, and in the future, possibly, to receive the above-mentioned pieces of paper, those wishing to do so must present their passport of the russian federation.

The Odesa Oblast received 208 generators from the United Arab Emirates. They will be distributed among the districts and communities of the oblast.

Mark Kutsevalov, a Ukrainian comedian from Odesa and a member of the “Laughter League”, walked from Kyiv to Kherson and raised almost 2.5 million hryvnias. With this money, 123 Starlinks will be purchased to ensure communication in the de-occupied communities of the Kherson Oblast.

Despite the enemy’s promise to stop firing on the Orthodox Christmas holiday, the shelling continued. Therefore, the UN mission, which was delivering humanitarian aid to Orihiv, came under fire. No casualties have been reported.

In total, about 220 enemy projectile hits were recorded in Huliaipole during the Christmas holidays. The russians bombarded the city with tanks, mortars, and used multiple rocket launchers. Both housing stock and local civil infrastructure were damaged.

In Stepnohirsk, the Grad anti-aircraft missiles damaged warehouses at a local enterprise, and in Pavlivka, russian invaders damaged a private house.

On the night of January 7-8, the enemy attacked the southern outskirts of Zaporozhzhia once again, using cluster munitions. Warehouses and other auxiliary premises were damaged as a result of the missiles. There is no information about the victims. The relevant services continue to work on the disposal of cluster munitions.

In the temporarily occupied Melitopol and Pryazovske, the russians have stopped broadcasting all Ukrainian TV channels, only russian TV is broadcast. In Melitopol, a series of explosions was recorded at the Hydromash plant, where the russian invaders have placed another military base. The roar lasted for several hours, probably the ammunition detonated.

In the Zaporizhzhia Oblast, the enemy deployed units of the russian guard to punish those who refused to fight. So, it became known that on January 5, six people who wanted to surrender to the Defense Forces of Ukraine, were shot near Chistopilla- the General Staff of the Armed Forces of Ukraine reported

Yesterday, the enemy carried out artillery strikes on one of the settlements of the Kutsurub community. Residential buildings were damaged. There are no casualties.

In Mykolaiv, the Pervomaisk, Voznesensk and Bashtanska raions, the day and night passed relatively calmly.

During the day, two fires broke out in Antonivka as a result of russian shelling.

At night, the russian army fired incendiary munitions on Tavriyskyi micro-district in Kherson. Previously, there were no deaths, injuries or destruction of civil infrastructure.

During the past day, the russian army shelled the Kherson Oblast 19 times. Civilian infrastructure was damaged, one person was injured.

In the temporarily occupied Kherson Oblast, the russian occupiers stopped the broadcast of all Ukrainian TV channels. In particular, only russian television is shown in Hornostaivka, Kairy, Zavodivka and Marinske.

Russian troops are still present on the Kinburn spit, where they attack settlements on the opposite bank from. The weather also hinders the completion of the operation to de-occupy the peninsula.

In the Kherson Oblast, the Armed Forces of Ukraine hit the location of the russian army in Havrylivka Druga. About a hundred russian soldiers were wounded. The number of dead is being clarified.

Italian director Enrico Baraldi will tell in his documentary about the work of the Kherson Oblast Theater during the occupation. The film will show the realities, achievements and difficulties of Ukrainian theaters during the war.

A soldier from the 121st Territorial Defense Brigade of the Kirovohrad Oblast performed a Christmas carol that went viral on social media. The defenders of Ukraine are inspiring!

In the Poltava Oblast, billboards were installed in honor of the fallen fighters of “Azov”. Oleksandr Tantsiura (call sign Staryi) and Roman Dziuba (call sign Apollo) died in Mariupol. The fighters served together and died on the same day during a combat mission.

The President of Ukraine has imposed personal sanctions on Artemii Lebedev, the creator of the first Poltava logo. Among them are the ban on entry into the territory of Ukraine, the blocking of assets, the ban on participation in land sales and purchases, etc. These restrictions will be valid for 10 years.

Currently, the designer supports the war of the russian federation against Ukraine and even visited the occupied Enerhodar, Mariupol and Donetsk, calling it a “little trip”.

Food kits for internally displaced persons are distributed in the communities of the Poltava Oblast. The products were purchased at state expense. More than 67,000 such kits have already been issued to IDPs. For example, this week they were received by people with disabilities, pensioners, and women with children in Kotelva.

The Perinatal Center of the oblast hospital has an equipped shelter. Patients of all departments and staff can stay in it during air alarms. It is also possible to give birth in the shelter. There is a delivery room equipped with everything necessary for medical assistance to mothers and babies.

The project “For Children of the War” gave young Ukrainians from the frontline territories the joy of the holiday.

Sweets from CF “Hope Around the World” and animators made the holiday joyful and unforgettable. For children from the frontline areas undergoing psychological rehabilitation in Kamianets-Podilskyi, master classes were held at the rock climbing club. In addition, children were presented with board games.

Rivne held a solemn farewell to Andrii Samchuk and Bohdan Rokytskyi. The defenders gave their lives for the independence of Ukraine in different parts of the front, one in the Mykolaiv Oblast, and the other in the Kherson Oblast.

Caring residents of Diadkovychi community collected home-made meat dishes and sweet pastries for the Ukrainian defenders. One of the oldest residents of the community, 83-year-old grandmother Raisa from the village of Verkhivsk, joined in the cooking. The collected goodies were sent in two cars to fellow villagers who are protecting the country in the Donetsk direction.

In Zakarpattia, another international border checkpoint was opened for rail passenger traffic. The point operates on the basis of the Rakhiv railway station for citizens traveling to/from Romania by train.

A monument to the russian bolshevik writer Maksym Gorkyi was dismantled in the village of Bushtyno in Zakarpattia.

In Irshava, a camp was organized for children from Kharkiv Oblast who survived shelling and occupation. They arrived in Zakarpattia on January 4 and celebrated Christmas here. On January 7, the children made dumplings and sang carols, which were taught to them by their teachers for two days. About 150 young Ukrainians are resting in the camp, and they will stay in Irshava for one more week. An entertainment program and psychological rehabilitation were organized for them. The trip was organized by the “Kharkiv with you” foundation.