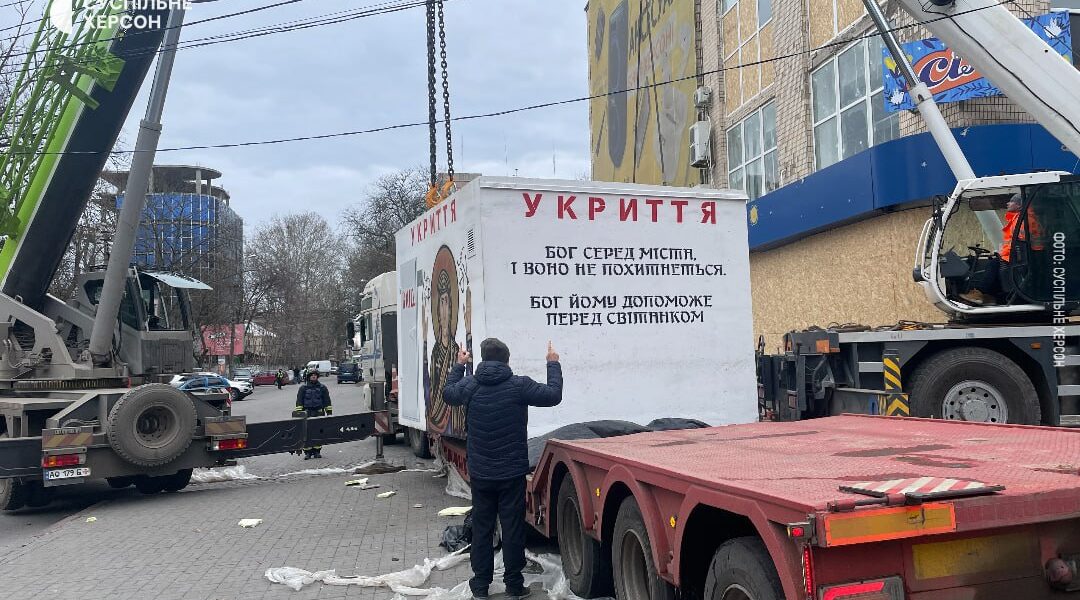 Operational information from the regions of the Active Community network January 9, 2023 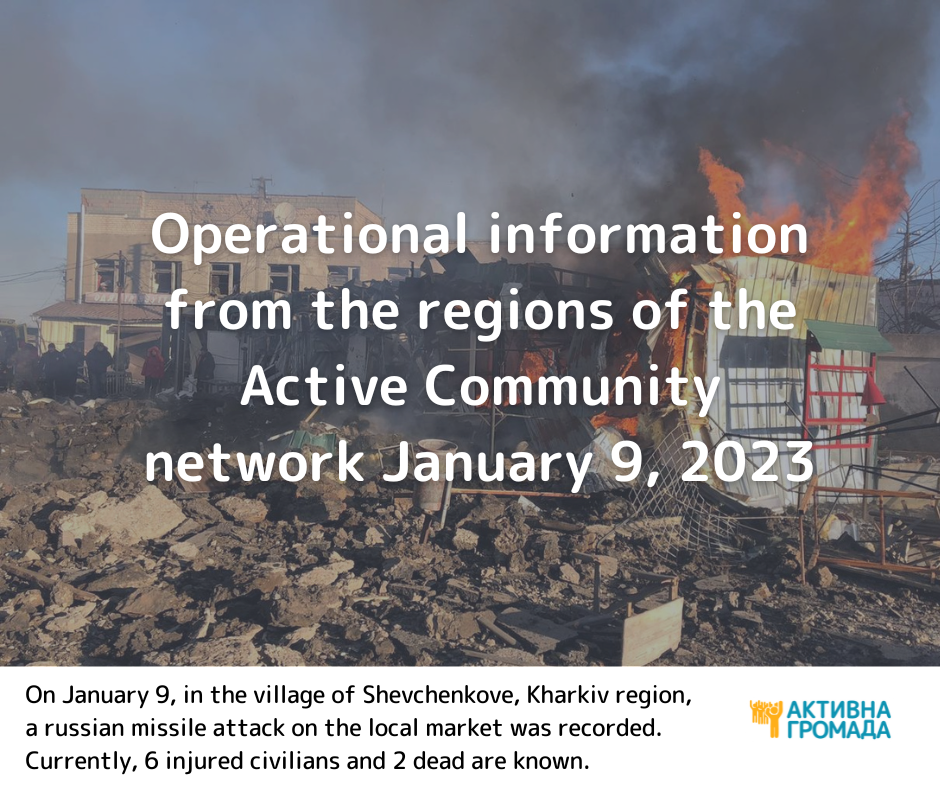 Kyiv returned to blackouts due to the drop in temperature.

In Kyiv, 42 boiler houses can already operate on generators in the event of a blackout. First of all, we are talking about small neighborhood boiler houses. Reconnecting the equipment to an autonomous power source allows you to minimize interruptions in the provision of centralized heating and hot water services.

Today, the photo exhibition “Kyiv – the unbreakable heart of Europe” started at the Central Railway Station of Kyiv. Photos of Ukrainian photographers, which showed how Kyiv survived the first days of the war, have already been seen in Prague, Lublin, Mexico City, Berlin and other cities of the world.

The famous American designer Julia Haart visited Bucha and promised to bring the biggest streaming platform Netflix to make a film about the events in Bucha during and after the occupation. 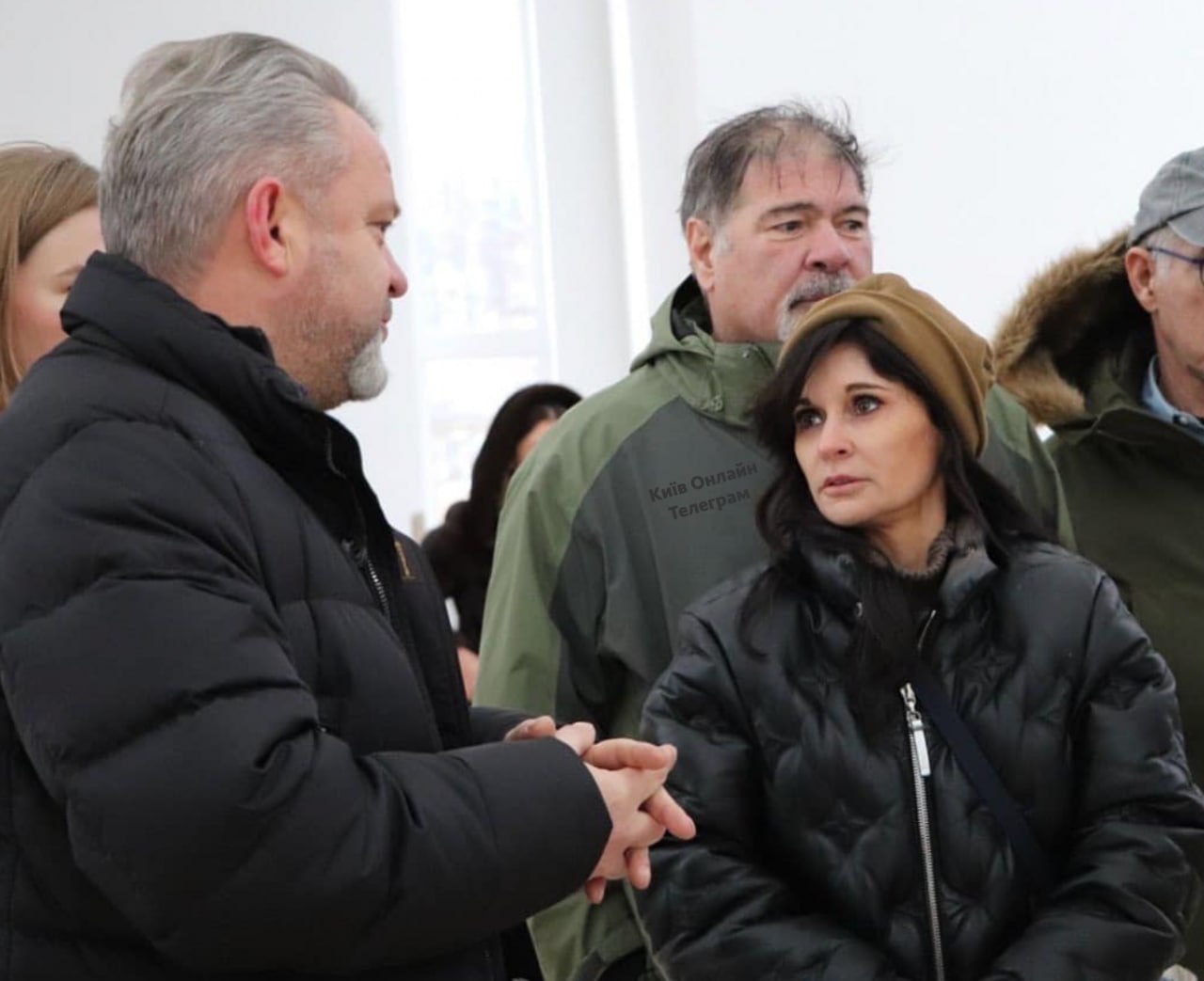 The Spanish charity foundation “Glory to Ukraine” delivered humanitarian aid to the Irpin modular town “Dubky” – food, hygiene products, toys, animal feed, wheelchairs for people with disabilities, etc. All the brought items were collected for Ukrainians who found themselves in difficult life circumstances by ordinary residents of Barcelona. 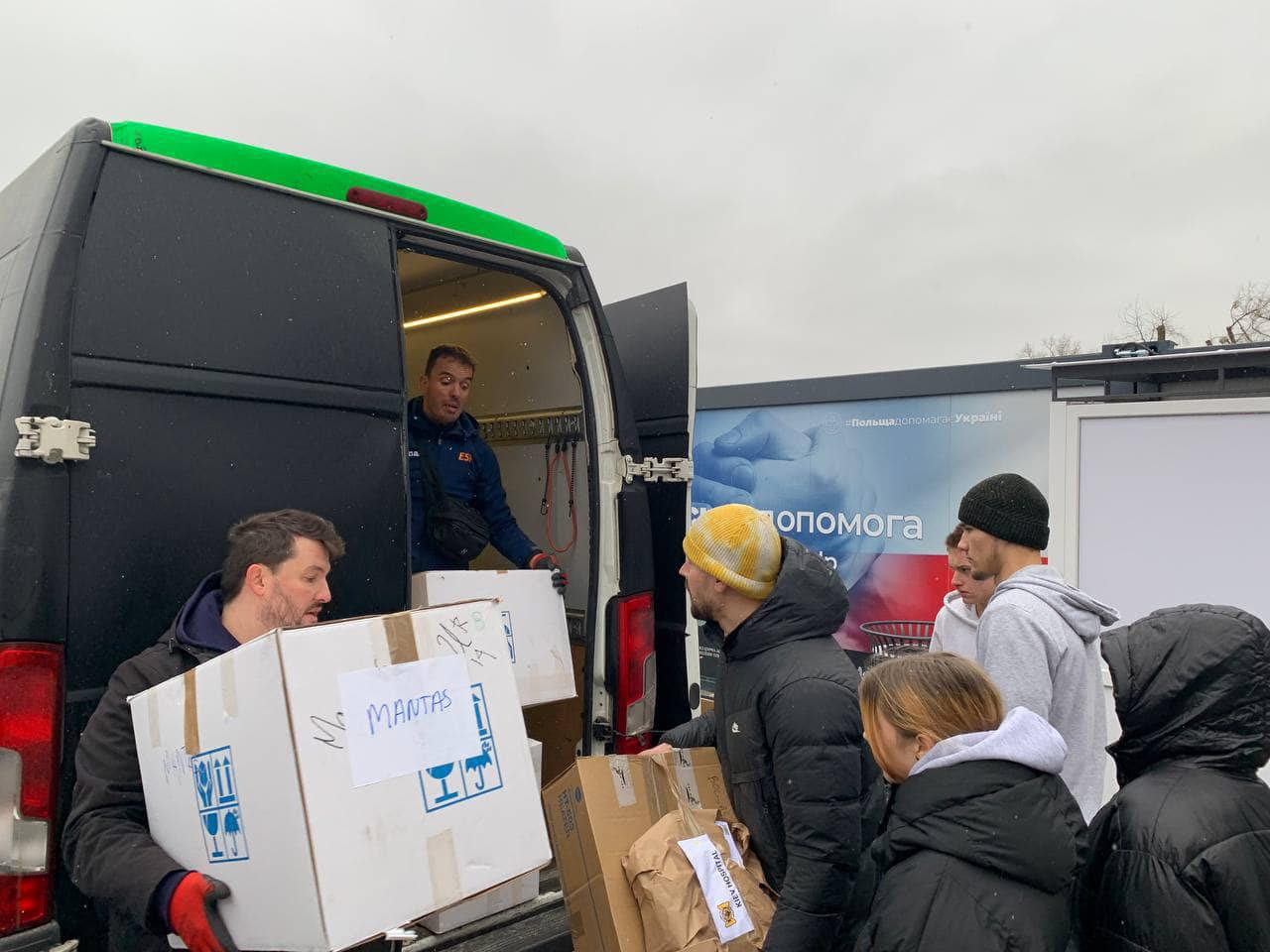 The Irpin reconstruction fund presented a video story about the apartment of the Dyachenko couple in the building on the street Hnatyuka, 6 destroyed as a result of russian shelling.

In the Zhytomyr Oblast, about 100 servicemen undergo rehabilitation measures after injuries on the basis of sports schools and sections of the region. Sports work with war veterans will continue to expand with the support of the Zhytomyr Oblast Center for Physical Culture and Sports for Persons with Disabilities “Invasport”.

A shipment of 7,920 food boxes arrived in Zhytomyr from the RRT team. They will be distributed equally between the Zhytomyr and Novoguynyvske community. This is not the first such cargo from the Repid Relief Team for the lay people of Zhytomyr. RRT purposefully supports Ukraine throughout the months of full-scale war.

Yesterday, the Novgorod-Siversky raion was twice shelled by the russians. From 1:05 p.m. to 2:15 p.m., seven rounds, presumably from barrel artillery, were recorded in the area of ​​the village of Galaganivka in Semenivka raion.

From 2:10 p.m. to 2:25 p.m., seven attacks were reported, probably six of them from an 82 mm mortar and one fragmentation grenade launcher from an enemy UAV in the area of ​​the village of Gremyach. Crosses and graves were damaged by debris, and the shells themselves fell into old graves, forming funnels on the spot. A civilian car was also damaged.

Today, explosive devices were detonated near the village of Shestovytsia.

In the Myropillia community, the houses of civilians, a farm and overhead power lines were damaged.

Today, an enemy missile attack on the local market was recorded in Shevchenkive village of Kupyansk raion. 6 civilians were injured, two people died. 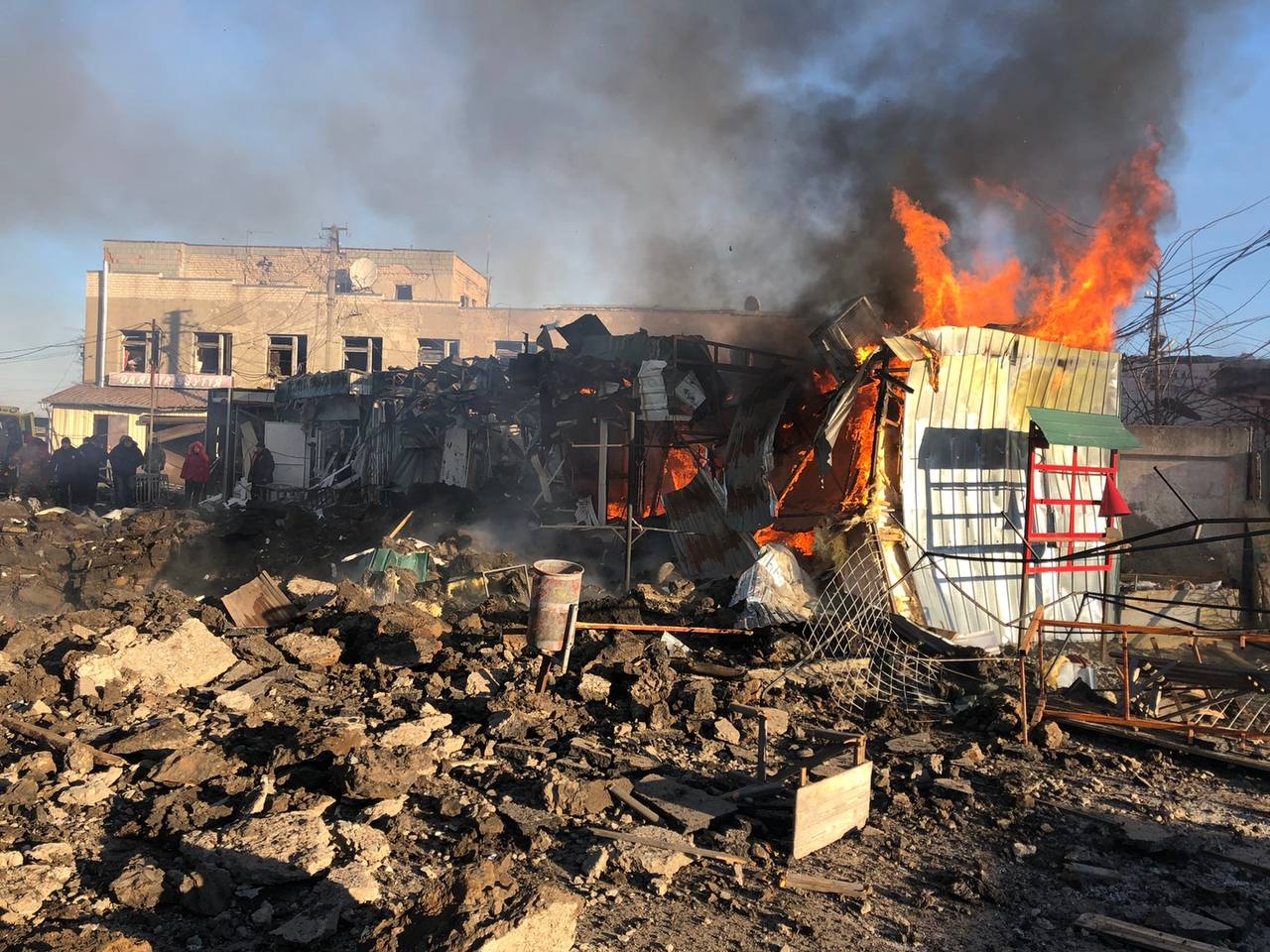 Yesterday, the enemy fired artillery, tanks, and mortars at populated areas of Chuguyiv and Kupyansk raion.

In Kupyansk, as a result of enemy strikes, economic buildings were damaged, and a fire broke out. In the village of Vovchansk Khutory, Chuguyiv raion, a private residential building was destroyed by shelling.

On the 8th of January, the russians killed 2 civilians of Donetsk Oblast – in Bakhmut and Soledar. 2 more people in the region were injured.

Since the 24th of February, russian rockets have claimed the lives of 1,295 civilians in Donetsk Oblast, and injured another 2,833. The number of victims in Mariupol and Volnovakha is currently unknown.

On the 9th of January, the russian army shelled the village of Kurakhivka in the Donetsk Oblast with artillery. As a result of the shelling, two civilians were injured. Photo – https://t.me/suspilnedonbas/10519

The public union “Coalition “On the Line of Collision”, whose members are from communities located along the front line, once again delivered to Avdiivka food and hygiene kits, as well as candles and a gasoline generator for use in bomb shelters. The humanitarian cargo was collected with the financial support of ISAR Unity 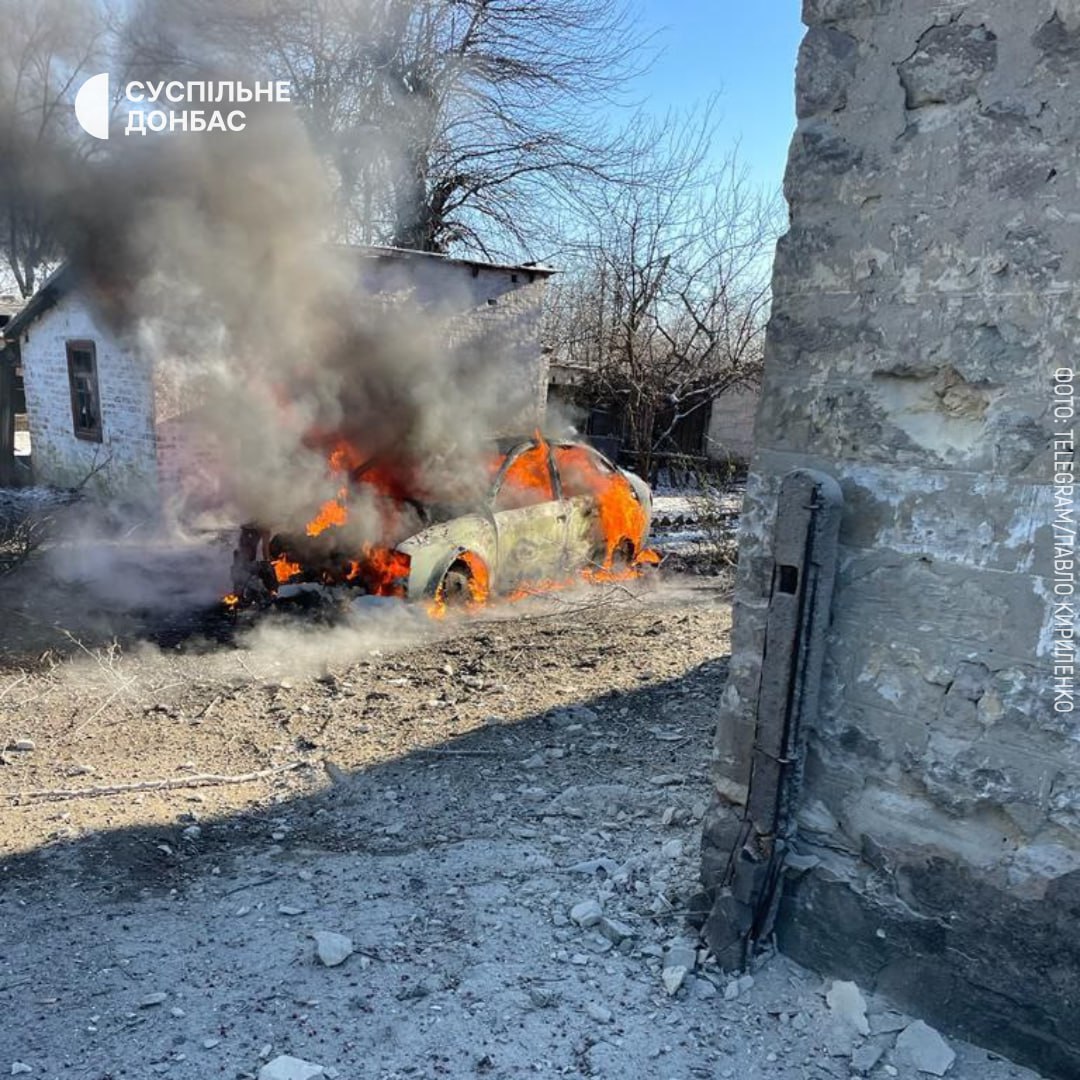 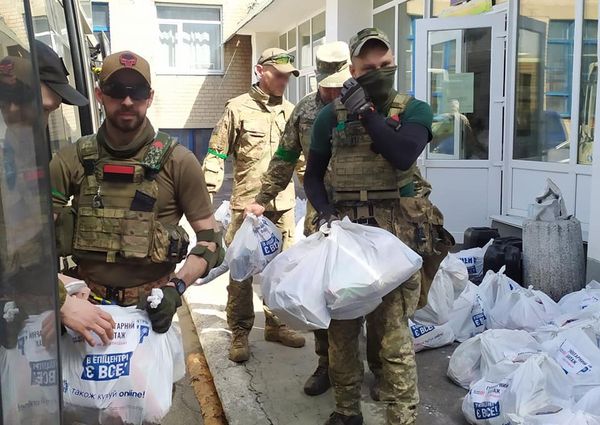 Educational institutions of the Pokrovsk community received another batch of digital devices. They were provided within the framework of the initiative of the Global Business Coalition for Education and the project «Digital asset for Ukraine» of the companies «HP» and «Microsoft».

The «Zlatytsia» ensemble of the Pokrovsk Music School collected more than 20,000 hryvnias to support the Armed Forces.

On January 9, the russian army fired missiles at Kostyantynivka, Donetsk Oblast, and hit an industrial zone. Two explosions rang out in the city.

Russian soldiers wounded one person in Paraskoviivka of the Soledar community and damaged three houses. The russian army shelled Soledar ten times during the day and damaged the shop. 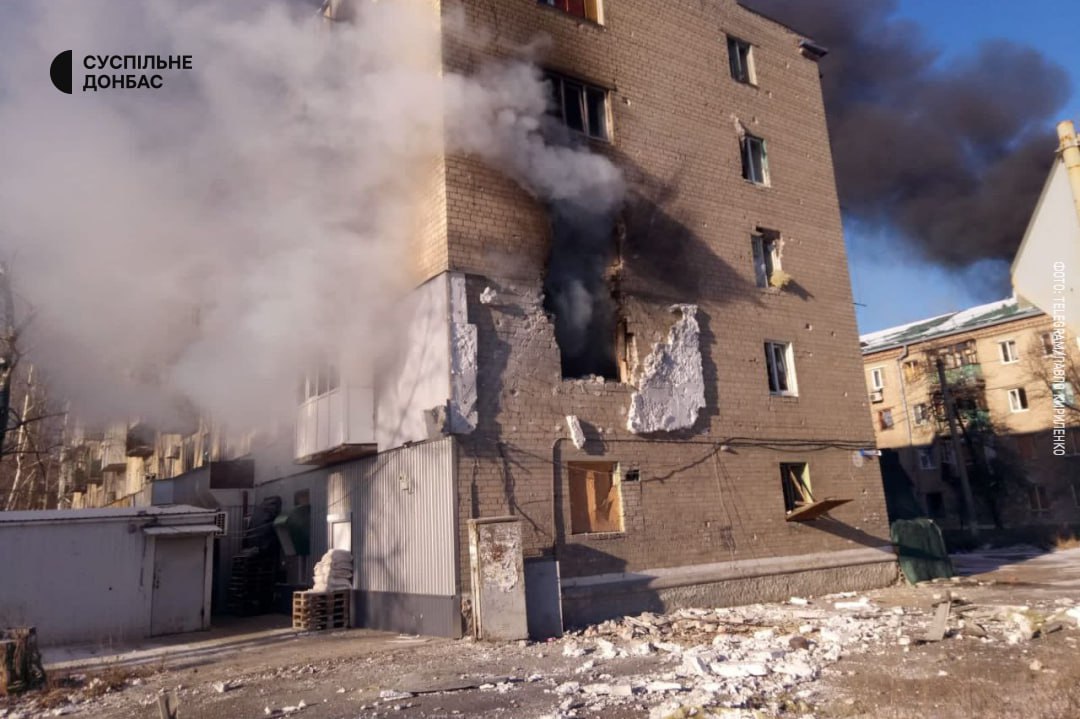 Periodic artillery shelling of Vugledar and the vicinity of Vodyane, Prechistivka and Bogoyavlenka was recorded in the Volnovakha direction. No one was hurt.

In the Lysychansk direction, during the day shelling took place in Siversk and Serebryanka of the Siversk community, as well as in Torske and Zarichne of the Lyman community — no casualties, the extent of destruction is being clarified.

The defenders of Severodonetsk and Rubizhne were awarded the «Zakhystnyku Luhanschyny [To the Defender of Luhansk Oblast]» award. The head of the Luhansk OMA, Serhii Gaidai, together with the head of the Rubizhne MA, Andriy Yurchenko, visited the boys at the celebration. 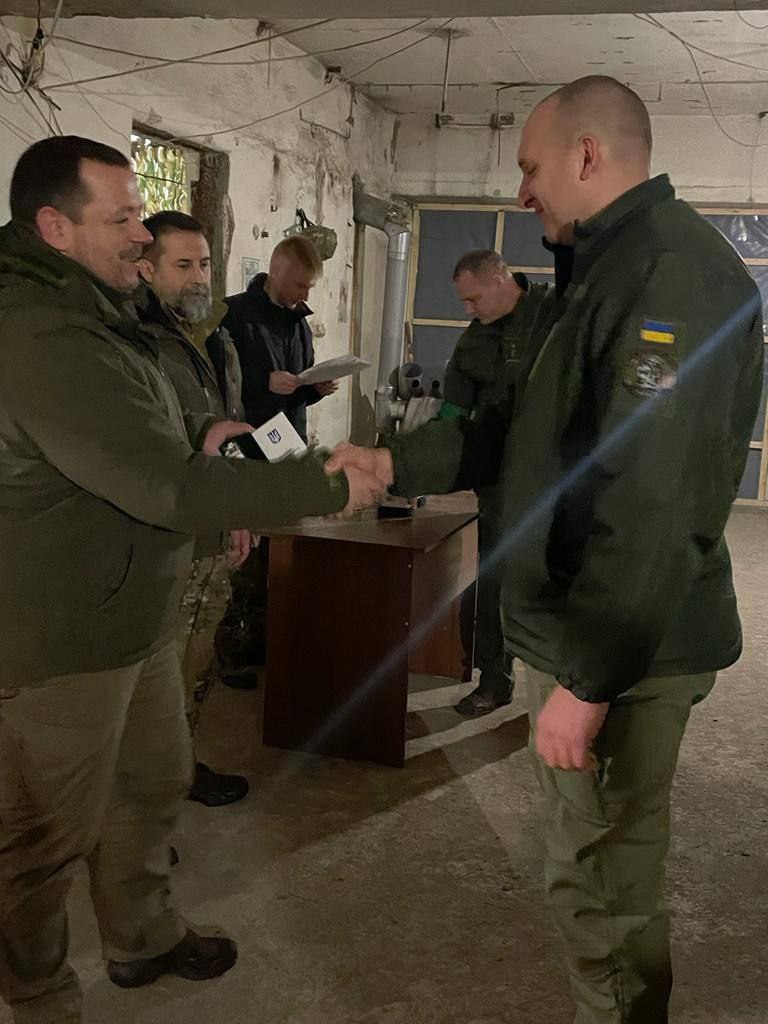 The occupiers in the Luhansk Oblast are inspecting commercial facilities to identify facts of hryvnia settlements with the population. The invaders demand to set price tags only in rubles, which led to the transition of the population to cashless payment. The enemy seizes terminals and threatens fines. But the circulation of the hryvnia does not stop. Only supermarkets follow the innovations. Markets and small shops continue to accept hryvnia, in particular, by bank card.

In the Mykolayiv Oblast, the enemy continues to use unmanned aerial vehicles, and units of the «South» air command destroy them.

On the morning of January 9, on the approach from the sea to the Ochakiv port, the forces and means of anti-aircraft defense of the «South» air command eliminated a russian strike-reconnaissance drone of operational-tactical level, which was conducting aerial reconnaissance.

As a result of the shelling of the port and city infrastructure of Ochakiv by enemy rocket salvo systems, several administrative buildings were destroyed, residential buildings and the city hospital were damaged. It is known in advance about 5 injured civilians who sought medical help. The information is being clarified.

Yesterday, the enemy carried out missile strikes on the water area of ​​Ochakiv community. There are no casualties.

At night, russian troops shelled one of Kherson’s critical infrastructure enterprises, an electrical substation that supplies several large boiler plants, was destroyed. The supply of heat and light in Kherson did not stop. 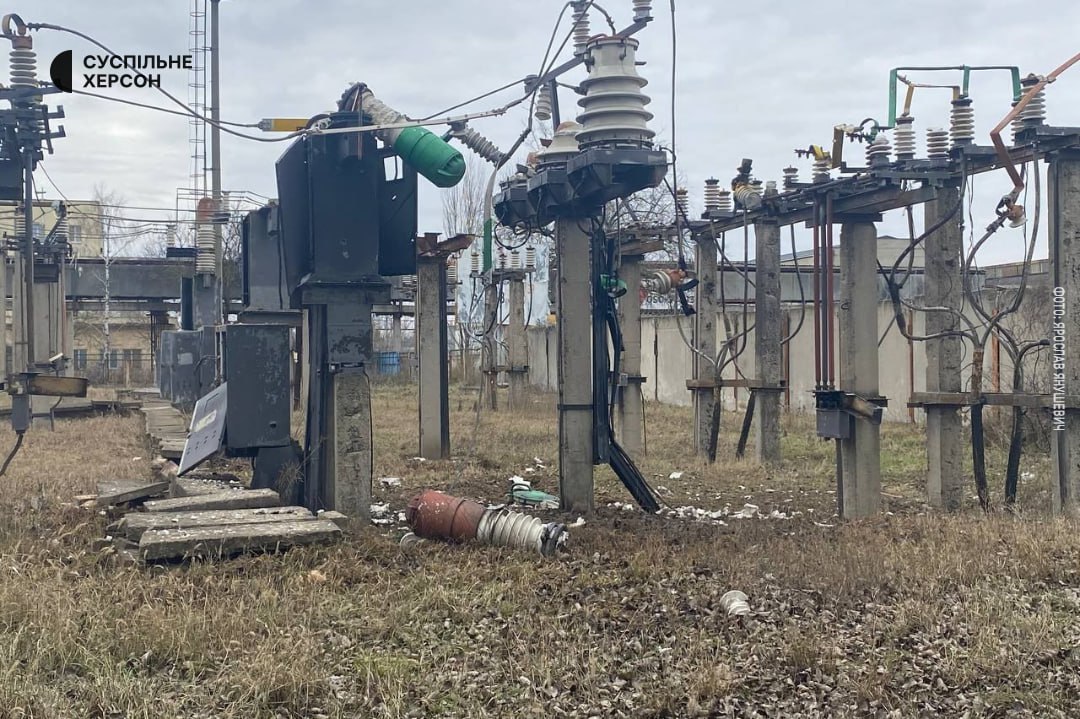 Russian troops shelled a residential quarter of Kherson, one person was killed and another was wounded.

Colonel of the russian guard Oleksandr Naumenko will be tried for the cruel treatment of prisoners of war in Kherson. He ordered the detention and torture of local residents, pro-Ukrainian townspeople, former military personnel, and ATO participants. The accused faces 12 years in prison.

The first mobile shelter was installed in Kherson. It is a concrete box with a double reinforced frame 4.5 m long, 3.25 m wide and 2.7 m high. It was placed in the center of the city at the scene of the tragedy on December 24. The shelter can accommodate 25 people at the same time. 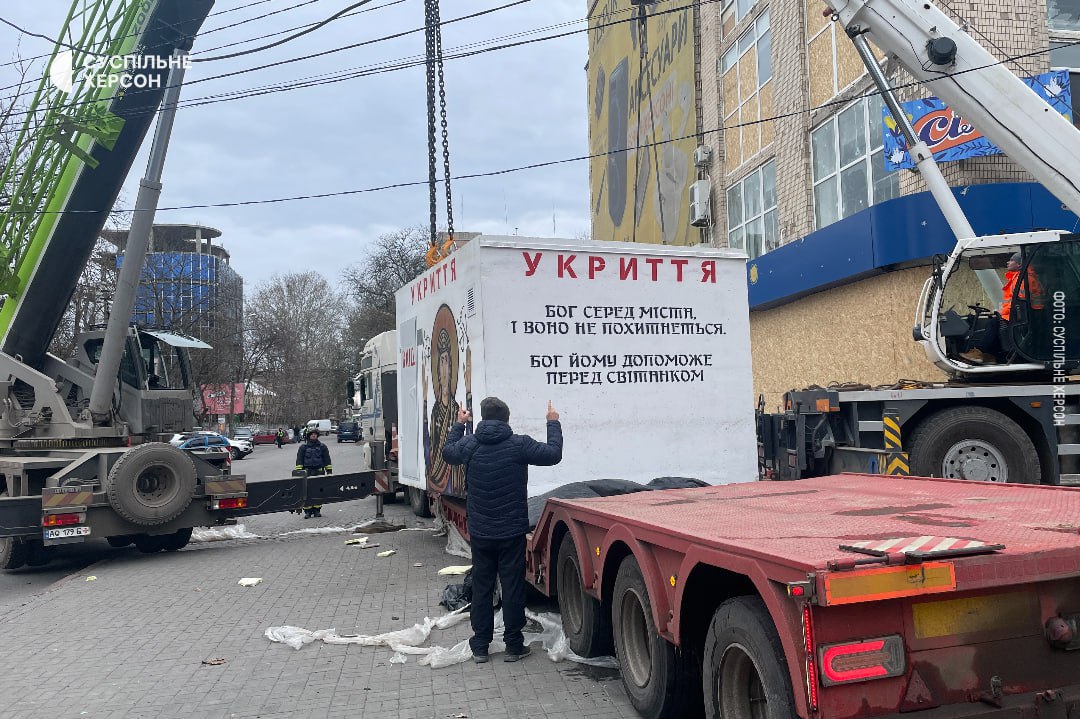 A concert in support of the Armed Forces of Ukraine was held in Ulanov, Khmilnyk raion. The concert was organized by folk and amateur collectives of the villages of the Ulanov community of the Khmilnyk raion. At the entrance to the hall, a box was set up to collect funds for the needs of the Armed Forces of Ukraine. That day, the organizers of the event managed to collect more than 13 thousand hryvnias, these funds will be used to support the Ukrainian army.

A train with immigrants arrived in Cherkasy. Met 40 people from Donetsk Oblast.

They conduct classes with a psychologist, learn art therapy and play board games – this is what children do for free in the educational and game room. It was opened in the Cherkasy shelter for displaced persons.

Hero defenders from the Kirovohrad Oblast died in the war with the russian occupier.

Blagovishchenske community of Golovanivsk raion said goodbye to Petro Malyarchuk, who died near Bakhmut on January 1, 2023.

The war took the lives of Ivan Dvoryak, born in 1991, and Anatoly Vdovenko, born in 1966, from the Svitlovodsk community of Oleksandriya raion.

Vdovenko Anatolii laid down his life for the freedom of Ukraine on December 31, 2022, performing combat missions near Bakhmut, Donetsk oblast, as a result of enemy artillery shelling, he received injuries incompatible with life.

On January 2, in the village of Novofedorivka, Pokrovsky raion, Donetsk oblast, as a result of an enemy artillery shelling, a junior sergeant, commander of the evacuation unit, a resident of the village Verbluzhka, Kropyvnytskyi raion, Serhiy Shyrokyi sustained a life-threatening injury.

The Ustynivka village council of the Kropyvnytskyi raion deeply mourns the death of Leonid Soroka, a resident of the village of Maryanivka, born in 1967, on January 5, 2023. During a combat mission near Bakhmut, he was mortally wounded.

The Smolinе community of the Novoukrainka raion lost its Hero – Junior Sergeant Vitalii Zhulinskyi, born in 1971, from the village of Khmelove. He was killed in the city of Bakhmut, Donetsk oblast.

A resident of Dolyna town community of Oleksandria raion – Eduard Yakubov died in the war with the enemy. The hero fell on January 3, 2023, in battles with the russian occupiers, performing a combat task. Eternal memory to our Heroes-defenders.

Among the 50 Ukrainian servicemen who were released from russian captivity on January 8 is a combat officer from Rivne oblast Petro Dodyk. Senior Lieutenant Petro Dodyk had been in captivity since April 2022. He was one of 33 officers released during the exchange. Therefore, the 29-year-old defender is returning home after almost nine months in captivity.

Volunteers of the Vanchykovtsi community delivered humanitarian aid to de-occupied Kherson. On the way, Bukovinian benefactors came under fire. However, they still delivered food, medicines, and other essentials to the military and local residents. And on the eve of the New Year, the humanitarian cargo was also transported to Sumy oblast. Warm clothes, food, and stoves will help our defenders survive the winter cold.

In 2022, more than 2600 IDPs applied to the Chernivtsi Regional Employment Service, and more than 500 internally displaced persons were employed.

Mykhailo Ivasyuk collects books for wounded soldiers in the Chernivtsi Regional Universal Scientific Library. To support the morale of the defenders who are now being treated in hospitals, Bukovinians has already brought more than 200 books.

During the festive caroling procession in Uzhhorod, people raised more than 20 thousand hryvnias for the soldiers. They performed not only traditional Christmas carols but also modern songs about the birth of Christ, and the war in Ukraine. Caroling brought together the west and east of Ukraine – artists of the Donetsk Academic Regional Drama Theater from Mariupol joined local groups with a festive program. Video –