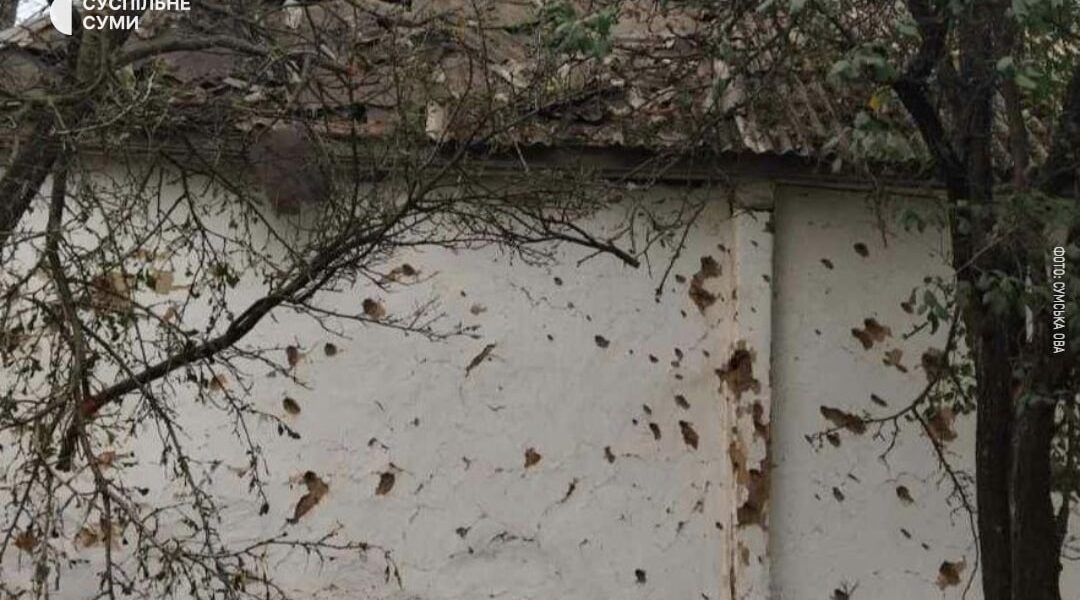 Operational information from the regions of the Active Community network September 6, 2022 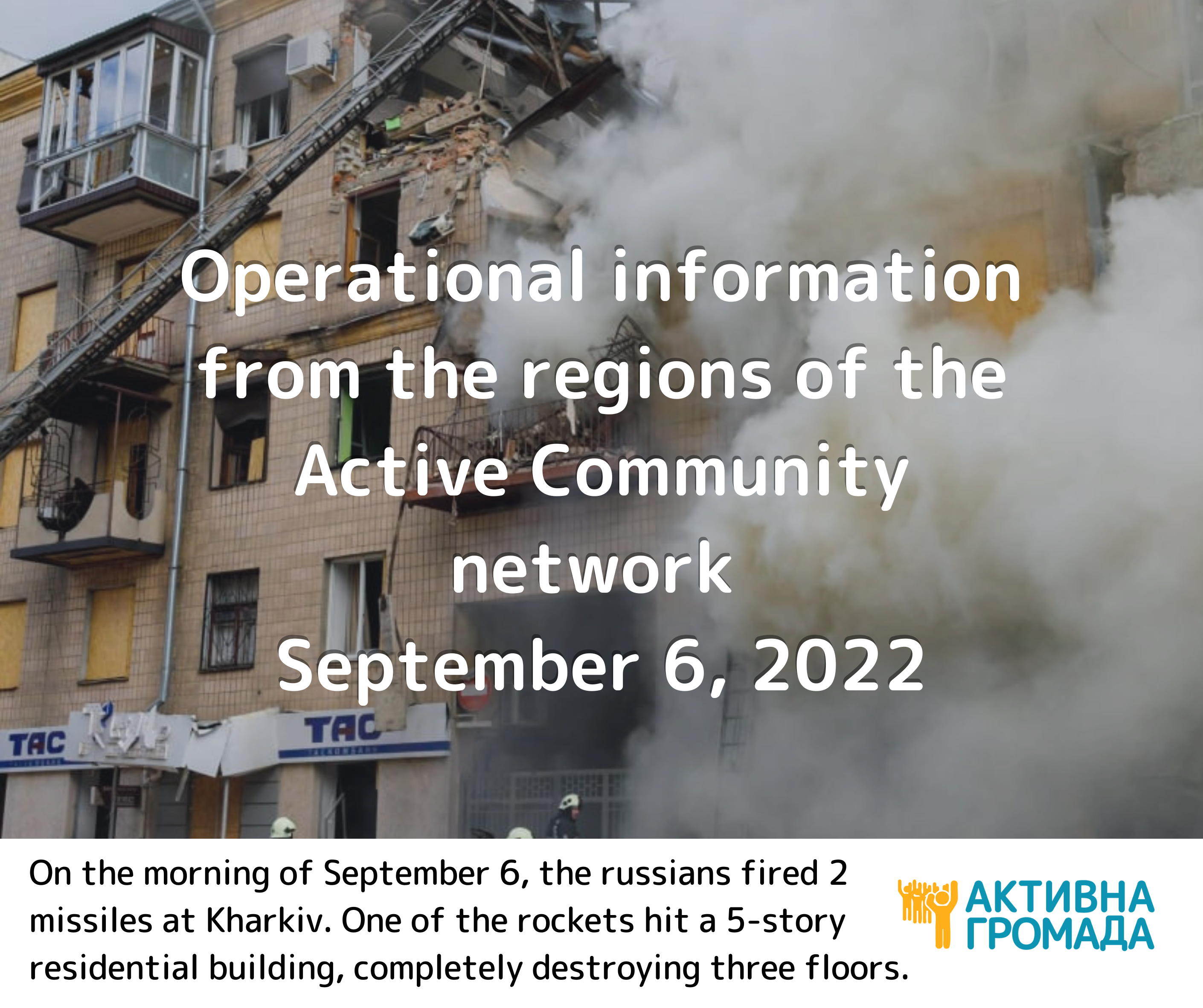 Kyiv is again shrouded in harmful smog. Exceeding the norm of harmful particles is observed in the north-west of Kyiv, that is, from the side of the Vyshhorod Raion, where peatlands are burning.

Pyrotechnicians of the Municipal Emergency Rescue Service (MERS) are inspecting the locations where a city-wide cleanup is planned for the World Cleanup Day on September 17th. In the period from August 30 to September 6, the MERS pyrotechnicians inspected 17 locations in the Darnytskyi, Pecherskyi, Podilskyi, Shevchenkivskyi, and Svyatoshynskyi districts of the city.

Yesterday in Bucha, in a burnt garage, they found the charred bones of two people killed by the occupiers.

The other day, preventive measures were held in Irpin, organized by the joint forces of the police, volunteer formations of the Irpin territorial community, and the military commandant’s office. Law enforcement officers checked more than 300 citizens and 200 cars. 37 administrative violations were documented.

The Red Cross Society of Ukraine will provide assistance in the repair of the premises of the new Irpin medical center, damaged during the hostilities.

The project “Reducing the risks of injury to children from explosive items” was launched in the schools of the Kyiv Oblast. The project will make it possible to reach about 16,000 students. The events are held with the support of the Democracy Fund of the US Embassy in Ukraine in partnership with the Kyiv Oblast Military Administration (OMA).

20 schools from the de-occupied communities of the Kyiv Oblast received 100 laptops. The laptops were handed over to educational institutions of three raions of the Kyiv Oblast: Bucha, Brovary, and Vyshhorod. This became possible thanks to the cooperation of the Ministry of Education and Science of Ukraine, the public organization SOS Ukraine, the Ministry of Economy and Innovations of the Republic of Lithuania, and the Department of Education and Science of the Kyiv OMA.

Another team of Irpin children brought money collected for the Ukrainian Army to the city council. 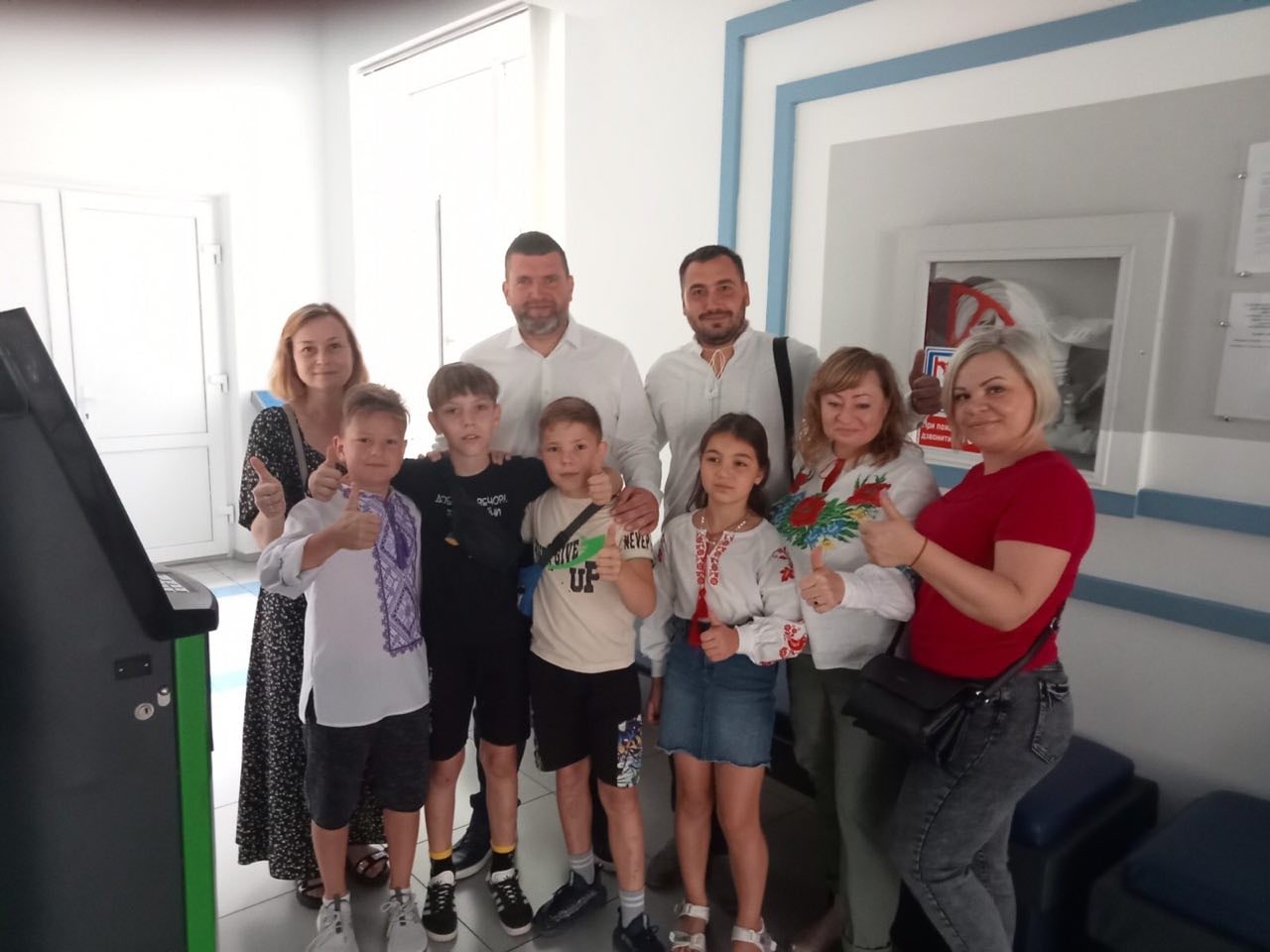 Today, a creative lesson was held at the Hurgri Art School in Irpin as part of the ”Seeing the Beautiful 2022” charity project.

The fighters of the brigade from the Zhytomyr Oblast showed the wrecked enemy equipment and the flight of the invaders on bicycles. This was reported on the evening of September 5 by the 30th detached mechanized brigade named after Prince Kostiantyn Ostrozskyi.

Zhytomyr will provide psychological and legal assistance to war veterans. This was reported on September 5 in the Zhytomyr City Council with reference to information from representatives of the public organization “Innovative Social Solutions”.

In the Chernihiv Oblast, another temporary crossing was opened near the destroyed bridge across the river. The location has not yet been disclosed for security reasons. The crossing will provide access to one of the main highways of the oblast and will connect the large communities of the north of the oblast with the center.

Photos from the inside of 21 schools, which were destroyed by the russians on March 3, were published online. 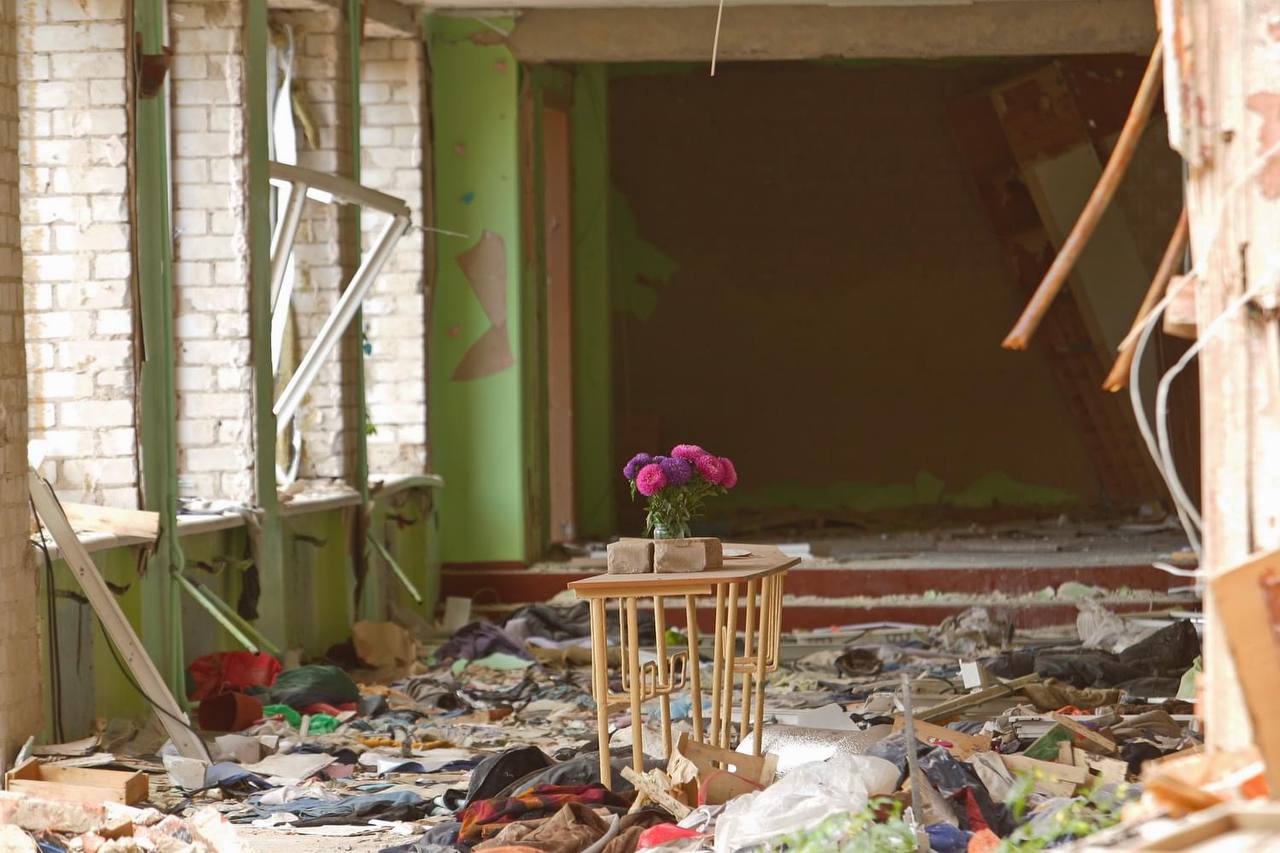 Due to yesterday’s morning shelling of Myropillia by the russians, 10 houses of local residents were damaged. There is still no electricity in part of the village. The russian military fired from self-propelled artillery mounts; 22 hits on the settlement were recorded. 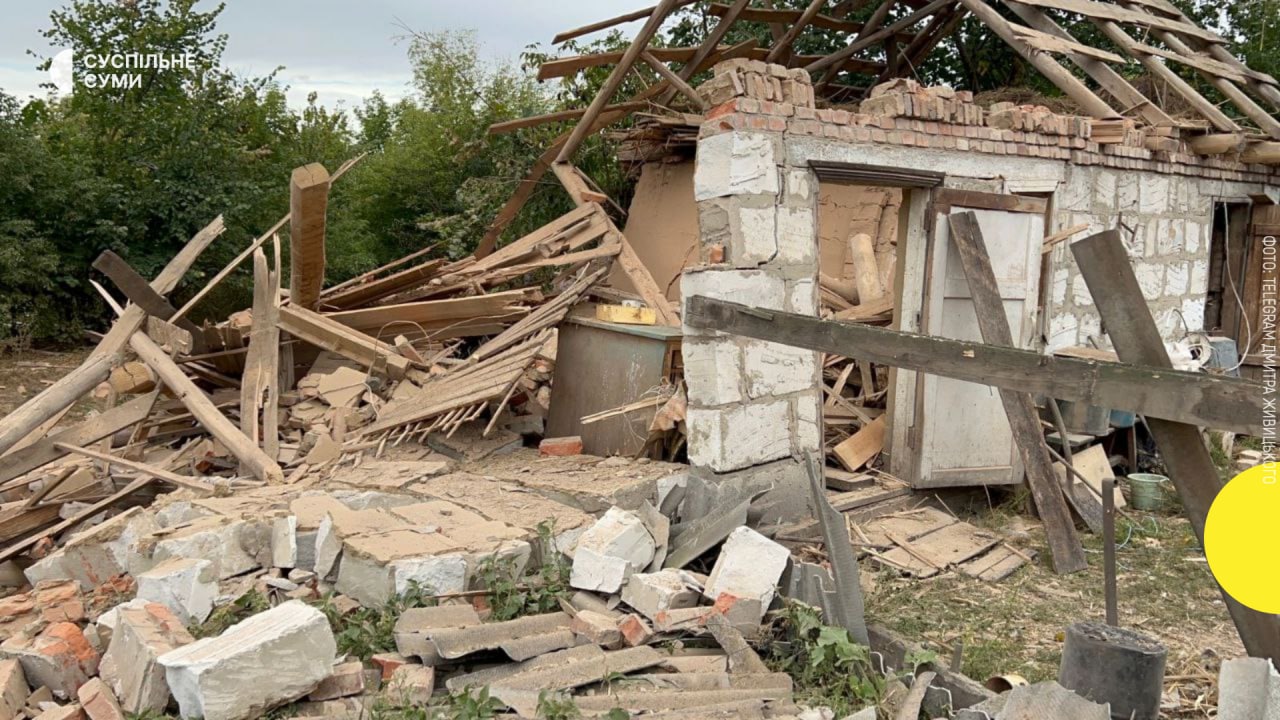 At night, the russian military used artillery to shell the village of Volfyne in the Bilopillia community. Shells hit the center of the village, destroying a private house and smashing windows. 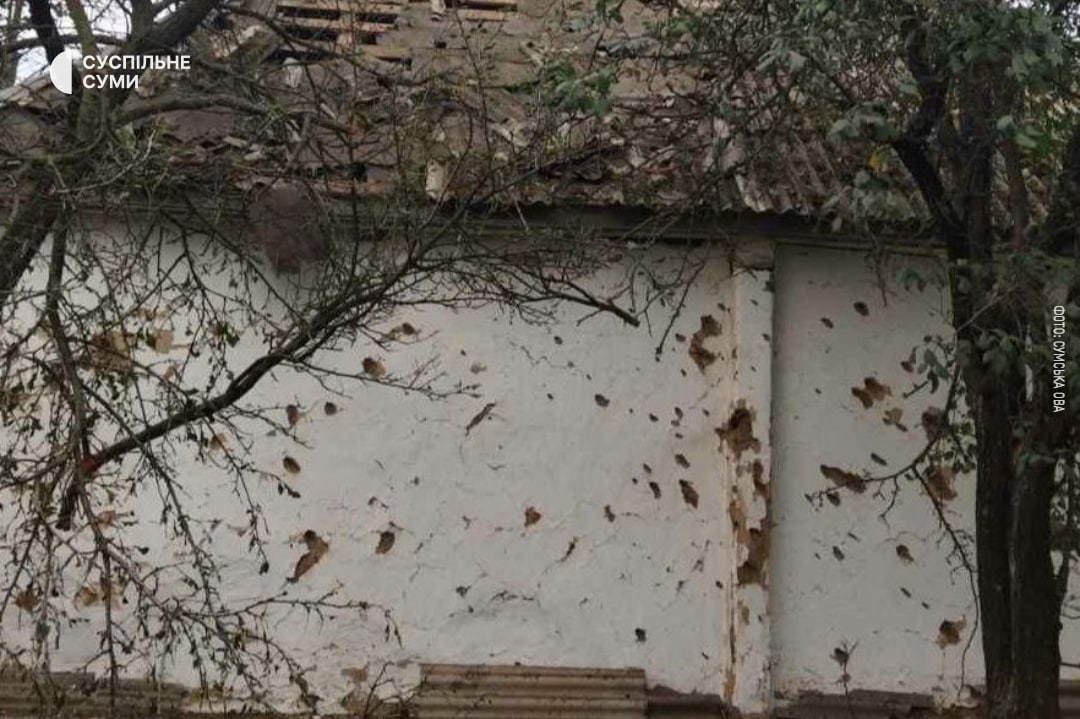 Around 10 a.m., the russians shelled the village of Manukhivka. The high-voltage substation was damaged, due to which there is no power supply in the settlement.

Last night, the enemy launched a missile attack on Kharkiv. In the Industrialnyi district, a 2-story building was damaged; also, a private residential house was destroyed, killing a 73-year-old woman.

Over the past day, the russian occupiers shelled the Kharkiv, Bohodukhiv, and Lozova districts of the oblast. Residential buildings and outbuildings were damaged, causing several fires.

In Zolochiv, 2 men were killed; the occupiers shelled 7 residential buildings.

As a result of the morning missile attack by the russians on the center of Kharkiv, two missile hits were recorded. One of the missiles hit the roof of a 5-story residential building, completely destroying three floors. Currently work is underway to clear the rubble. 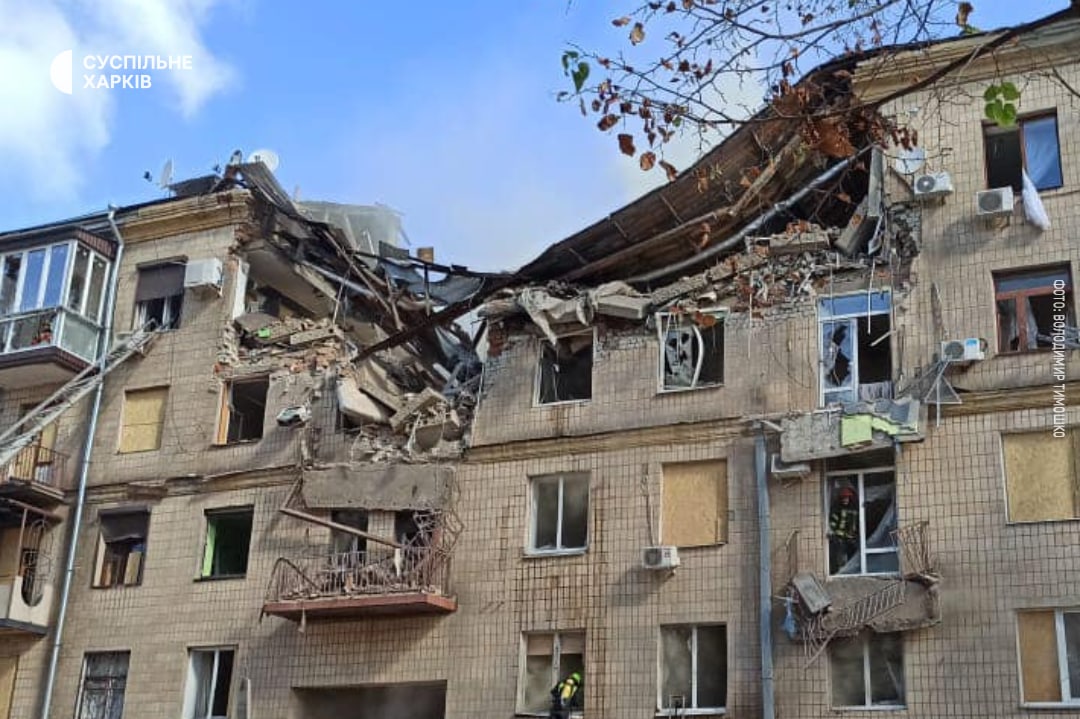 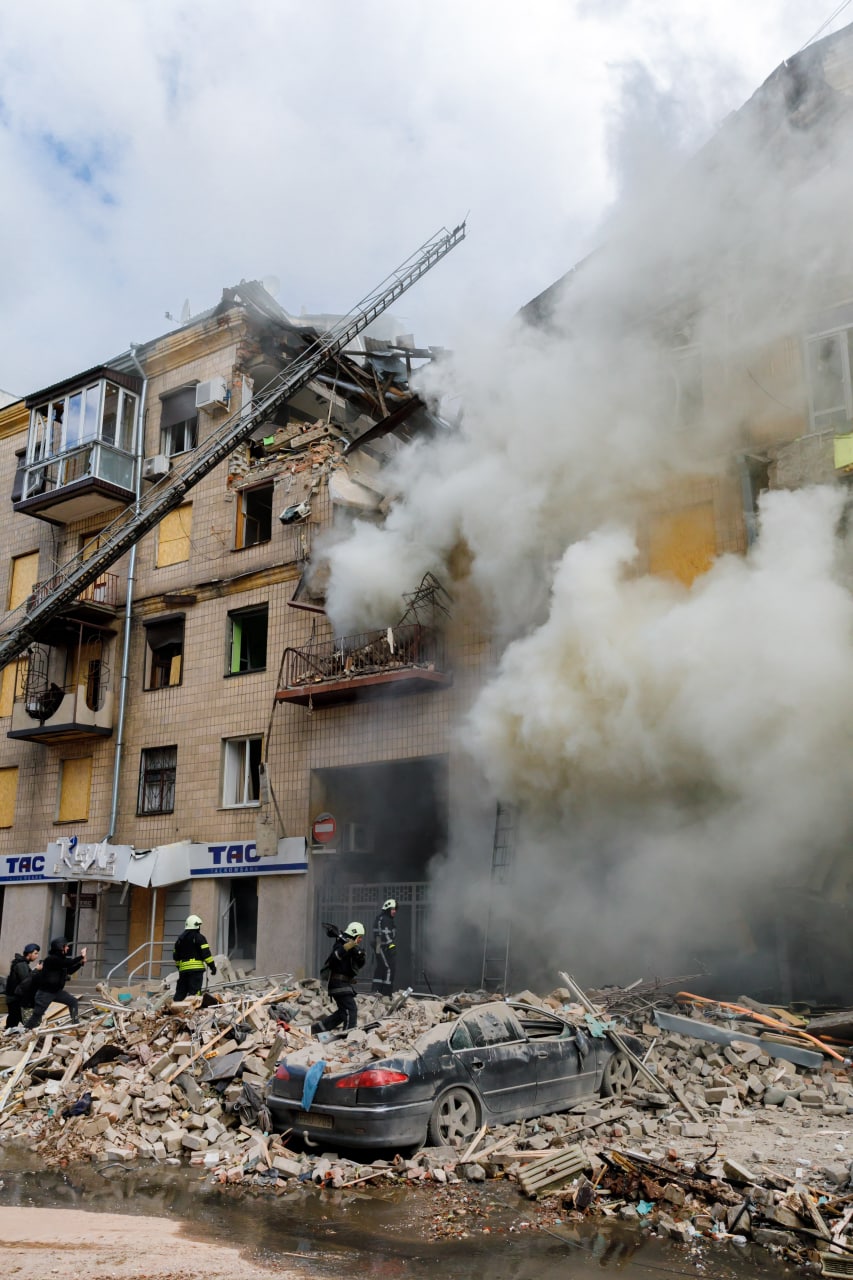 The second missile hit the courtyard of the administrative building.

During the day, the russian army shelled the Donetsk Oblast 17 times. Avdiivka and Bakhmut are under constant fire of the invaders. The city of Kurakhove, the villages of Bohoyavlenka, Khromove, Heorhiivka, and Kostiantynivka were also hit, according to the communication department of the police of the Donetsk Oblast.

The enemy used S-300 air defense missiles, Grad multiple launch rocket systems, and artillery. 14 civilian facilities were destroyed or damaged, 10 of them residential buildings. As a result of the night missile attack in Kurakhovo, the school was destroyed and a school bus was damaged.

Also, the enemy, using the available fire weapons, continued shelling the military and civilian infrastructure in the Kramatorsk, Avdiivka and Novopavlivka sectors.

This time, the russians destroyed another school – Kurakhove Gymnasium No. 2.

Late last night, the russians launched a missile attack on the gymnasium, destroying one wing of the 4-story building and damaging the nearby residential high-rises. There were no casualties.

This is already the 274th school in the oblast, which underwent bombardment by the russians since the beginning of the full-scale invasion, and the 29th completely destroyed. In total, 615 educational institutions were damaged to varying extent in the Donetsk Oblast during the last six months.

Since February 24, the russians have killed 800 civilians of the Donetsk Oblast, and wounded another 2021.

On September 5, the russians wounded 4 civilians of the Donetsk Oblast: in Khromove, Heorhiivka, Bakhmut, and Kostiantynivka.

During the entire period of military operations on the territory of the Pokrovsk Raion (Donetsk Oblast), almost all settlements were shelled. Cities near the front line were most affected by rocket attacks, namely: Avdiivka, Ocheretyno, Mariinka, Pisky, Kurakhovo, Krasnohorivka and other villages. 595 civilians suffered from the war. 197 people died and 398 were injured. About 186 people’s houses and 23 infrastructure objects, historical monuments and religious buildings were destroyed.

The past day in the Pokrovsk community was relatively calm. There are no facts about the victims and the destruction for the past 24 hours.

Humanitarian aid from the Office of the President of Ukraine is delivered to the residents of the villages of the Pokrovsk community.

Discussions continue regarding the use of mine water for the needs of two communities, Pokrovsk and Myrnograd: permit documents are pending in Myrnograd.

The coordinator of the AUI “Active Community” conducted art therapy training in the city of Cherkasy for internally displaced persons and local residents.

Elderly people who have lost their documents are forced to literally rummage through garbage cans. All those who lost their documents in Mariupol cannot receive humanitarian aid from mid-August. Before the introduction of restrictions, the occupation authorities somehow did not pay close attention, and humanitarian aid was open to everyone. But now, if a person does not have a passport and a pension certificate, he will be refused. It is impossible to restore documents in Mariupol. It is impossible to issue any assistance payments from occupiers without documents. 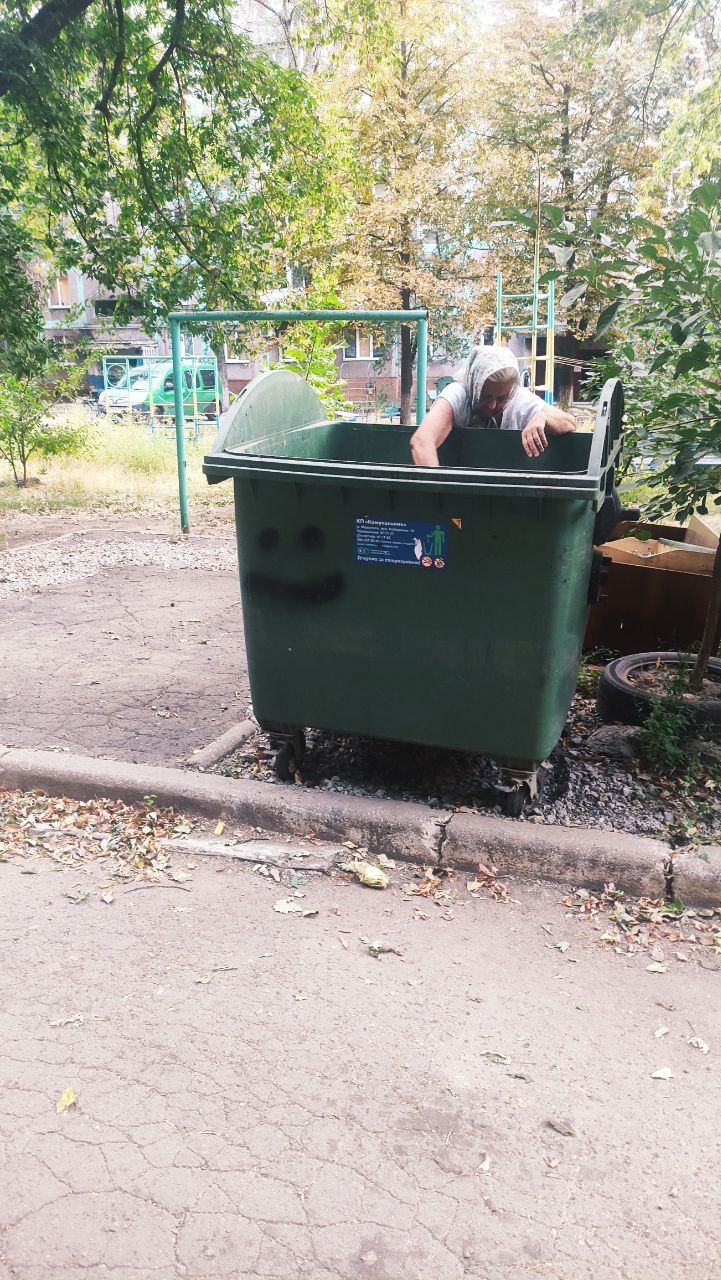 The occupiers announced a hunt for the Mariupol Resistance Group. After the massive appearance of the Ukrainian letter “Ї” on the streets of the city, the occupation authorities were frightened and are planning to carry out additional filtering measures.

On Svobody [Freedom] Square, the occupiers are destroying the national ornaments on the wings of the sculpture – “doves of peace”. 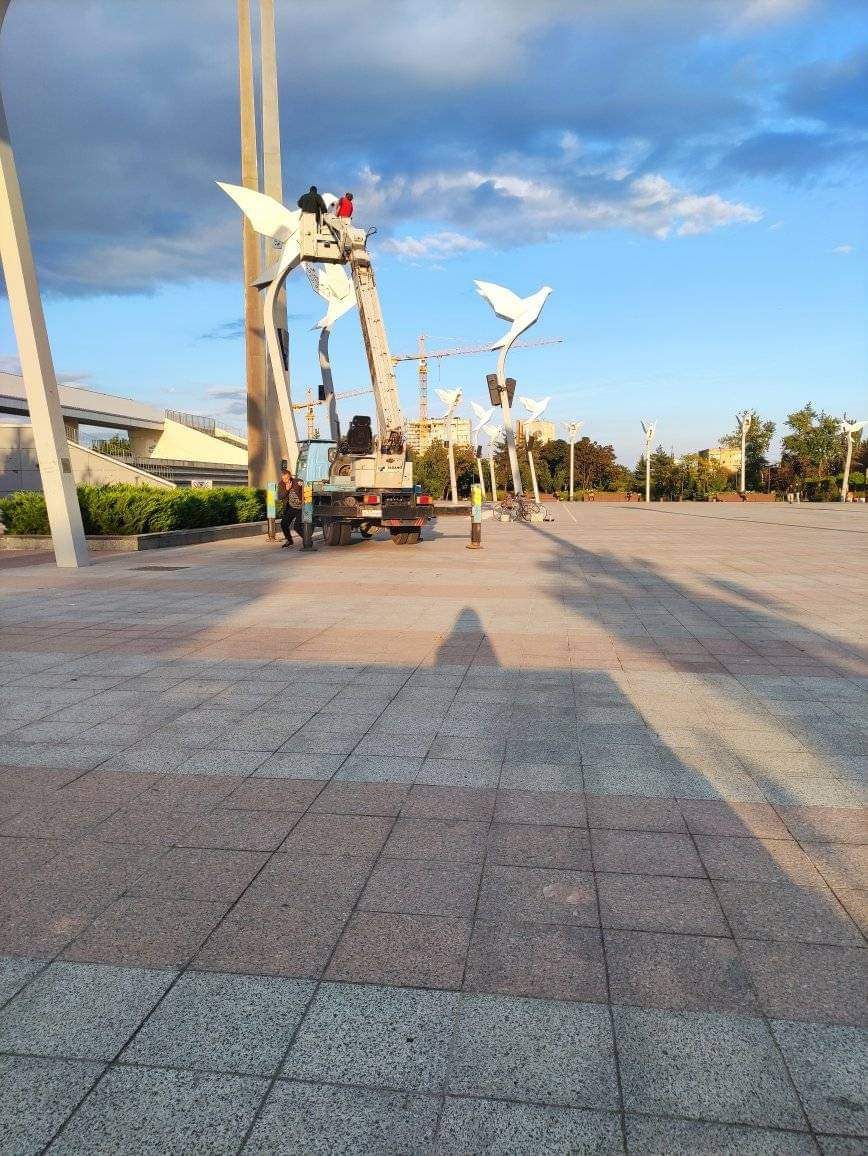 Mariupol children in different countries continue to study online in their native schools. Online education started in schools №10, 29, 47, 48, 54 and 66. 4,700 children started studying in these institutions.

Mariupol children shot a documentary about their hometown and their dreams. Under the leadership of the Ukrainian film school and under the supervision of Ukrainian directors, the children learned about all the stages of film production in 14 days. As a result, three short films and a documentary work “Dreams of the Children of the City of Mary” were filmed. In it, they interviewed each other.

Men in the occupied territory of Luhansk Oblast continue to be forcibly “mobilized”. They have no choice: either to hide until the deoccupation, or to agree to go to war against Ukraine.

The industrial enterprises of the Luhansk Oblast, from where men were conscripted for the war, are recruiting shift workers from russia.

Local residents write that in the Kreminna Raion, namely in the village of Kabanne, the russians concentrated a lot of equipment, placed it between the houses of peaceful people and in the gardens.

Local residents found the body of a man with signs of violent death in Metyolkine. The man was last seen when the russians took him away for questioning. After the interrogation, no one saw him until the body was found.