Operational information from the regions of the Active Community network September 7, 2022

The one hundred ninety-sixth (196) day of the heroic resistance of the Ukrainian people to a russian military invasion continues.

The one hundred ninety-sixth (196) day of the heroic resistance of the Ukrainian people to a russian military invasion continues. 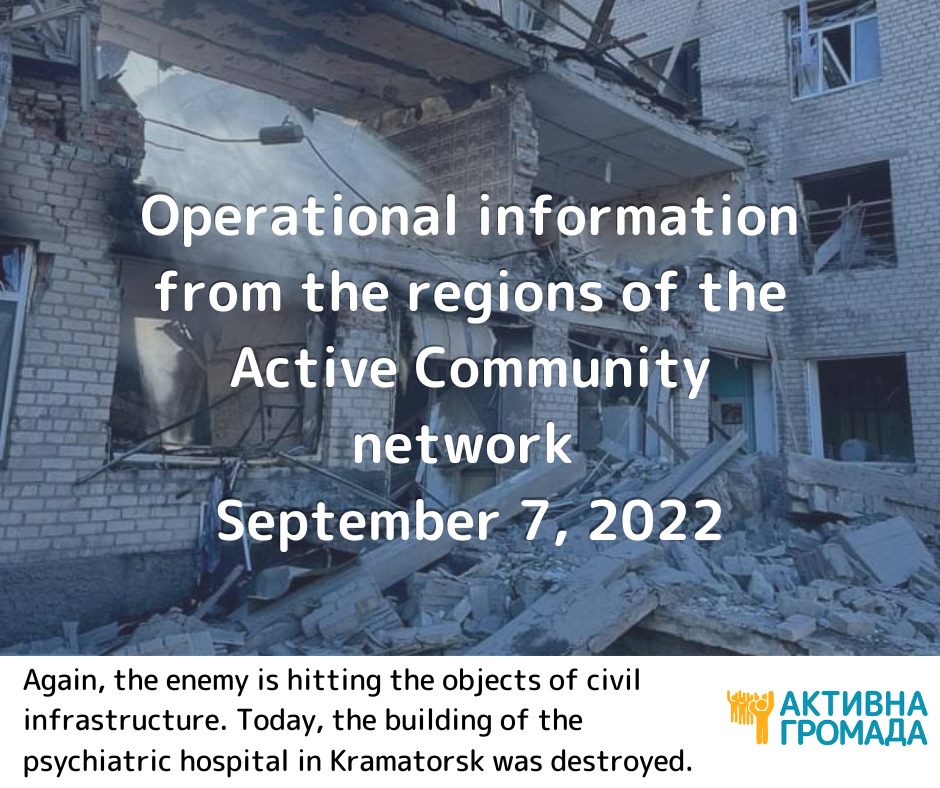 Yesterday in Kyiv, on Sophia Square, the memory of the Ukrainian soldiers who died in Olenivka was honored. About two hundred people lit lamps and candles in memory of those killed in Olenivka. During the moment of silence, everyone knelt down. 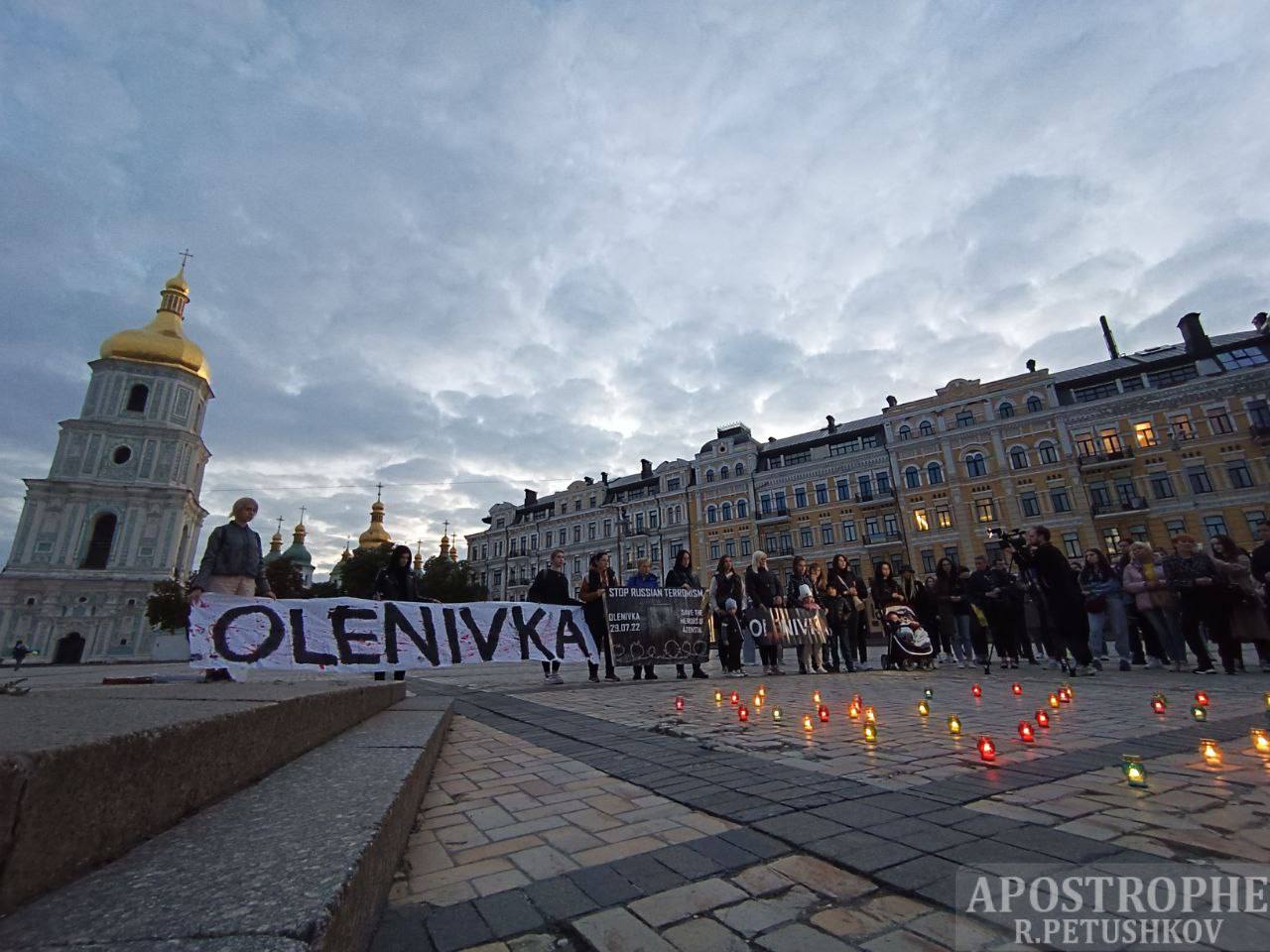 As of today, the readiness of the Kyiv Oblast for the winter period is 83%. More than 6,000 residential buildings, about 1,700 social sphere facilities, 1,140 boiler houses, and almost 660 km of heating networks have already been prepared.

To date, almost 18,500 buildings and facilities have been inspected before rebuilding, for which the relevant project documents have already been developed. This is 76% percent of the total extent of damage. By the end of 2022, it is planned to restore about 10,000 facilities affected by hostilities.

Since September 1, 960 full-time or mixed format educational institutions have started their work in the oblast. These institutions are equipped with shelters that have been checked by a special commission. The shelters have electricity and water supply, ventilation and sewerage.

The participants of the “Berehyni from Irpin” initiative, who have been weaving camouflage nets for the Armed Forces of Ukraine at the State Tax University for more than a month, have already handed over 1,500 square meters of nets to the military. 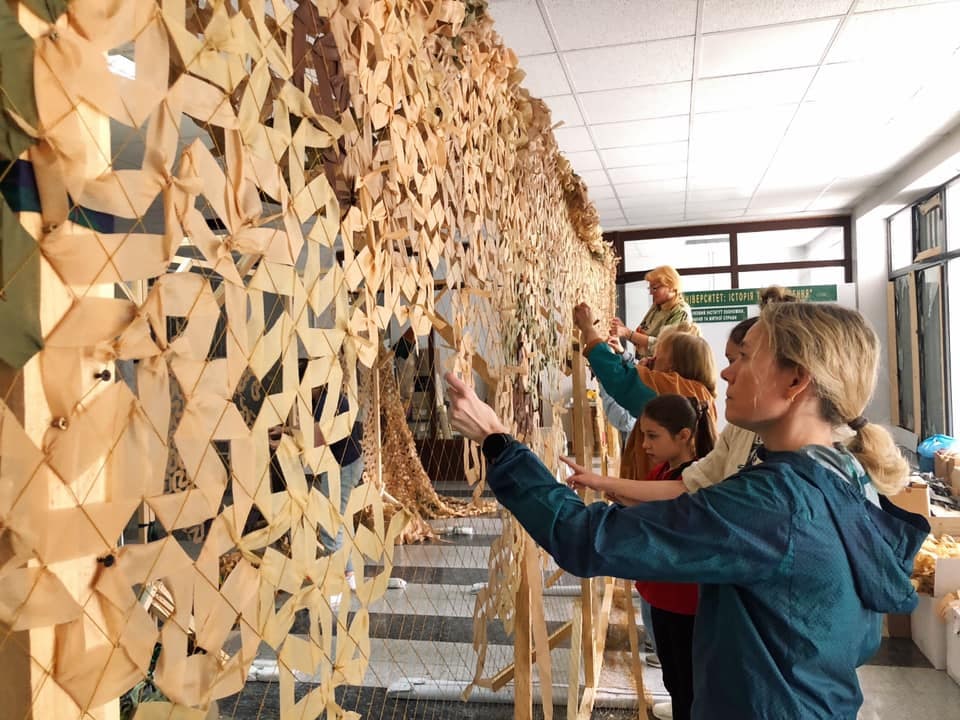 Serhii Haidabura, a hero from Berdychiv, was killed in action while recapturing his native land.

Nine-year-old Stanislav Sedov from Zhytomyr has been baking and selling bread for a month now. The boy collects money for the needs of the Ukrainian military. During this time, he baked thirty-three loaves of bread.

In Zhytomyr, law enforcement officers detained a man who was photographing military objects.

This was reported by the press service of the patrol police in the Zhytomyr Oblast.

The coordinator of the AUI “Active Community” communicated with internally displaced persons on the issues of humanitarian and psychological assistance.

On September 6, the occupiers shelled the border areas of the Chernihiv Oblast four times. Nine explosions were recorded in the Novhorod-Siversk Raion. Later, the Semenivka community was also shelled with tube artillery. 12 explosions were recorded. There, during the shelling, dry grass caught fire and a non-residential building was hit.

The village of Senkivka was shelled by the russians with a 120 mm mortar. In total, 10 hits were recorded.

In the evening of September 6, the russians again shelled the Semenivka community with MLRS. 13 explosions were recorded.

Ambassador Extraordinary and Plenipotentiary of Turkey to Ukraine, Yağmur Ahmet Güldere, visited Chernihiv on September 6, where he met with the local authorities and inspected the operation of the free kitchen organized by the embassy. A mobile trailer, in which residents are served hot lunch meals daily, was installed in the city on August 19 as part of the Turkish humanitarian mission.

Yesterday, the russians fired 140 mines and shells of various calibers on the Sumy Oblast, and there were also about 70 shots from small arms. In the Nova Sloboda community, a high-voltage substation was damaged during the morning shelling.

Yesterday, at 10:30 p.m., russian forces shelled the Khotyn community. Almost at midnight they shelled the Znob-Novhorodske

community, and around 2 a.m. on September 7 the enemy fired on the Myropillia community.

In the Kharkiv Oblast, the fighters of the Armed Forces of Ukraine went on the offensive in the direction of Verbivka – Balaklia, northwest of Izium.

Last night, the russians launched 2 missile attacks on the Nemyshlianskyi district of Kharkiv. One of the missiles hit a two-story building, the nearby car wash caught fire, and cafes, shops, and cars were damaged. The second missile hit the ground.

Today, at around 4 o’clock in the morning, 1 missile strike was recorded in the city of Zmiiv, Chuhuiv Raion; the missile hit the ground near a medical institution.

Over the past day, the occupiers shelled the settlements of the Bohodukhiv, Chuhuiv, Kharkiv, and Izium raions of the oblast. This led to the destruction of residential buildings and outbuildings, and caused several fires.

Yesterday, as a result of the russian missile attack on the village of Pechenihy in the Chuhuiv Raion, 2 people were wounded – a man and a boy.

Two women got wounded in the Bohodukhiv Raion. The condition of the victims is mild to medium.

The russians conducted the most active shelling in the Kramatorsk Raion: Kramatorsk, Sloviansk, and Kostiantynivka were affected.

In Sloviansk, around four in the morning, the russians fired at the branch of school No. 4 and hit a high-rise building. Rescuers extinguished the fire in the damaged house. A family that recently returned from evacuation may be under the rubble. Search operations are currently underway.

In Kostiantynivka, the private sector came under fire: the summer kitchen was destroyed.

In the Soledar community, farm premises in Vasiukivka and a private house in Rozdolivka were destroyed; explosions thundered in Odradivka of the Svitlodarsk community.

In addition, at night, the russians shelled Ivanivka in the Grodivka territorial community.

The extent of destruction and information about the casualties are being clarified.

In other sectors, the enemy fired at military and civilian infrastructure from tanks, combat vehicles, tube and rocket artillery, namely in the Kramatorsk and Avdiivka sectors.

Again, the enemy is hitting the objects of civil infrastructure. Today, the building of the psychiatric hospital in Kramatorsk was destroyed. There were no casualties.

The head of the Slovyansk Military Administration gave an interview to Apostrophe TV. You can familiarize yourself with the link:

The coordinator of AUI “Active Community” received and handed over a load of humanitarian aid – disposable dishes, medical products, hygiene products, and sweets.

By order of the President of Ukraine, Serhiy Viktorovych Dobryak was appointed the head of the Pokrovsk city military administration of the Pokrovsky district of Donetsk Oblast.

The day was relatively calm in the community. There are no facts about the victims and the destruction for the past 24 hours.

The city of Kurakhovo, Pokrovsk Raion, is again under enemy fire.

In search of peace and away from war – how to start life in a new place, tells a resident of Myrnograd community of Pokrovsk Raion, who went to EU.

The coordinator of the “Active Community” AUI held a meeting with internally displaced persons, answered questions, and talked about the ADRA charity organization, the help it provides, its resources and opportunities.

In the direction of Bakhmut, the enemy fired mortars, tanks, barrel and rocket artillery in the areas of the settlements of Bakhmutske, Soledar, Bakhmut, New York, Zaitseve, Vesela Dolyna, Mayorsk and Yakovlivka.

Ukrainians show in every possible way that Mariupol is Ukraine. The action of drawing the letter “Ї” on the streets continues and is gaining momentum. Russians run around the city and try to paint over a symbol of Ukrainian resistance. 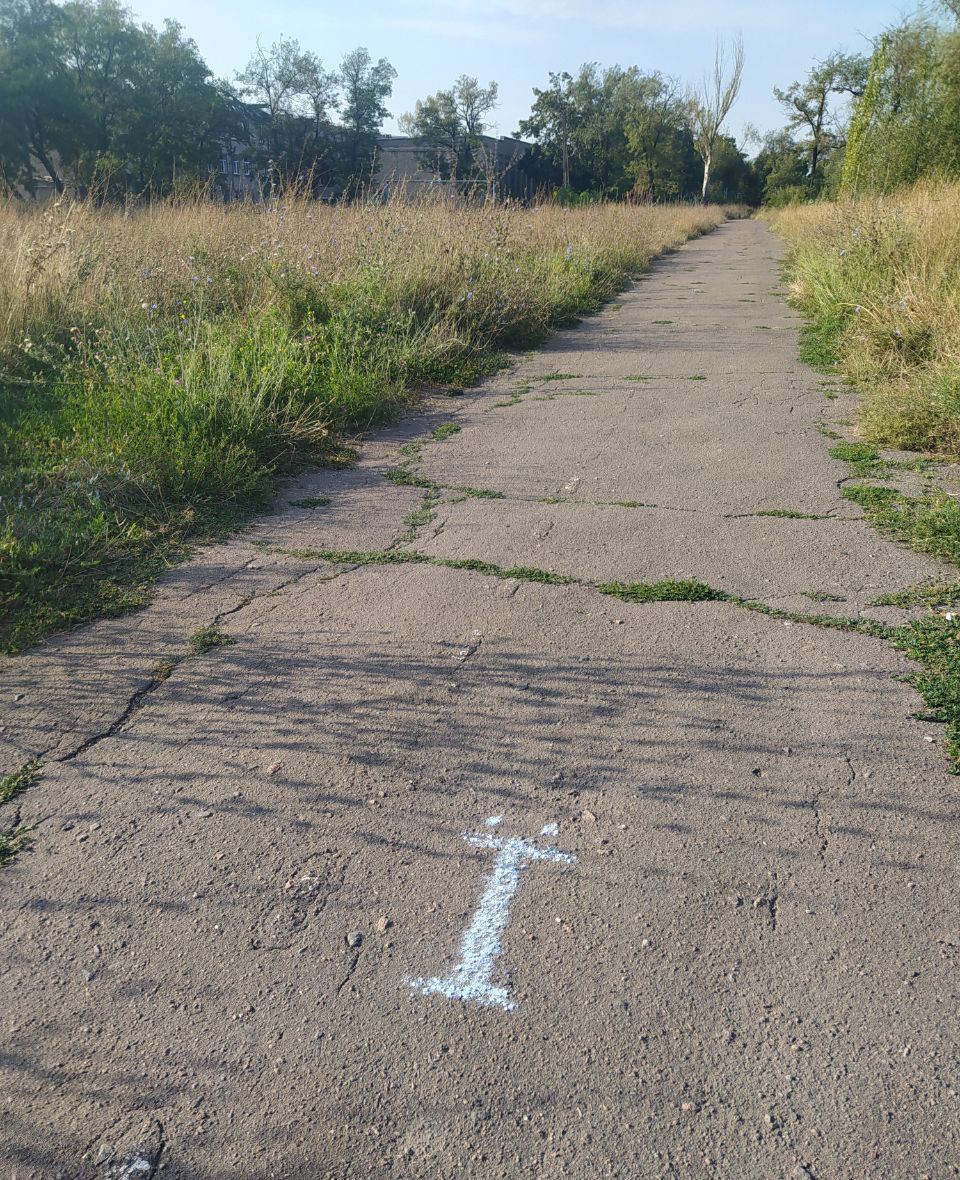 The occupiers continue looting under the guise of repairs. To date, the russians have dismantled the entire complex of laser illumination along with the control equipment on Freedom Square. In addition, the ice rink, the fountain in the Theater Square and the unique inclusive children’s playground were sent “for repair”.

The occupiers threaten Mariupol residents with prison terms so that they do not leave the city. People are told that they will be deprived of their freedom in Ukraine.

In Severodonetsk, 840 students receive assignments in schoolyards, and study independently at home without electricity or the Internet. Of the total number as of the beginning of 2022, this figure is only 8%.

In the Kherson oblast, since the beginning of the full-scale russian invasion of Ukraine, the occupiers have kidnapped 613 people. For example, in the Skadovsk Raion of the Kherson oblast, the russian military abducted the acting head of the village after she refused to cooperate. The woman and family members were threatened with physical violence.

The occupiers have intensified “counter-subversive” measures in large cities in the south of Ukraine. The number of searches and inspections of public and private transport has increased. People are stopped on the street to check their phones and personal data. The occupiers loot and destroy the property of the pawnshop network. The estimated amount of damages today is 800 thousand hryvnias.

In Kherson, the occupation authorities “renamed” the Mykola Kulish Regional Academic Music and Drama Theater to “russian Academic” and announced the recruitment of workers.

In the Kherson oblast today at around 8:30 a.m., an anti-aircraft missile unit of the Air Force of the Armed Forces of Ukraine shot down a Russian Ka-52 “Alligator” attack helicopter. A barge with military personnel and combat equipment of the russian troops was also destroyed in the Golaya Prystan area.

People stick together and group together. The situation in the city of Skadovsk and the oblast is stable and critical. An air raid siren sounds constantly. There are fewer and fewer people in the city, and at night the rumble of enemy equipment is heard. ATMs, banks and almost all shops do not work.

The coordinator of the AIU”Active Community” together with local activists bought food and medicine, which are available in the city, for the elderly.

In the afternoon, on September 6th, the Kutsurub community was under enemy attacks. At 10:30, as a result of shelling in the village of Kutsurub, 6 residential buildings were damaged. At 11:50, enemy shelling of the territory outside the village of Solonchaky was recorded.

Shelling of territories and nearby settlements of Berezneguvatska and Shirokivska communities continues. Over the past day, the hits were outside the borders of populated areas.

One of the main tasks for the city government today is to ensure the heating season. Odesa Mayor Gennadiy Trukhanov said this in an interview with Swedish Radio. According to him, all the necessary hydraulic tests of the network have been conducted in Odessa and the city is technically ready.

A delegation of representatives of the Ministry of Foreign Affairs of Sweden, the Embassy of the Kingdom of Sweden in Ukraine and the Representative Office of the World Food Program in Ukraine is visiting Odesa. As noted by the head of the UN Department of Policy, Conflict Resolution and Humanitarian Activities, Mr Karl Skau, Sweden is helping Ukraine a lot today, but the main purpose of the visit is to hear the needs of Ukraine and Odesa, to find out what other help the international community can provide. During the meeting, the parties discussed the current situation in Odesa, the needs of internally displaced persons and the issue of providing Ukraine with products from the World Food Program.

People are united and active, engaged in volunteering. The situation in the community is tense due to the threat of rocket attacks.

The coordinator of the AUI “Active Community” provided information to citizens about receiving psychological, social and humanitarian assistance.